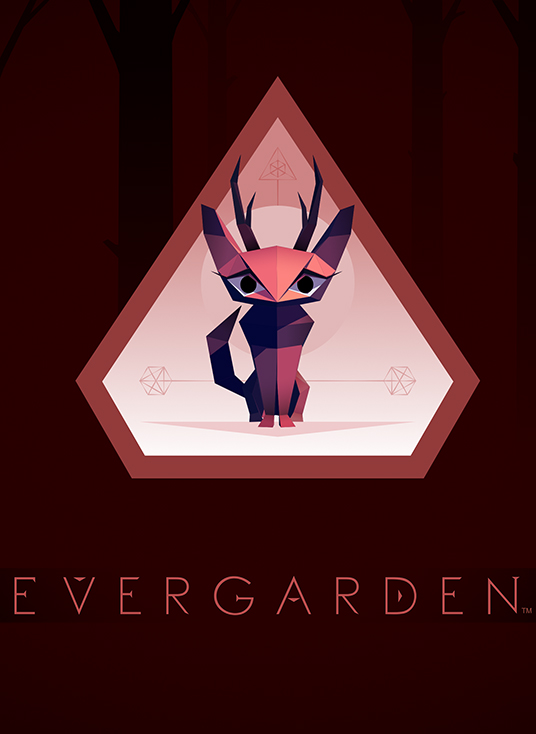 No garden is ever done, no matter how much work is put into it. Tend it, move the flowers about, raise and grow endless sprouts, and there’s always more to do. Evergarden takes place in a small plot of land, a hexagon three hexes per side, and while each game may eventually reach its end, there’s always a way to grow it better. The next garden will be magnificent, right up to the point the consequences of one poorly-planned move finally catch up to you.

The world of Evergarden is a mysterious place, one that only reveals itself through experimentation. It all starts with a puzzle box that promises everything will make sense eventually before drawing you inside, where a horned fox-dog-critter oversees a hexagonal grid. A few pointers reveal the gameplay basics and the rest is all discovery. There’s probably a limit to the secrets hiding in Evergarden, but it’s going to take more than a few games to reveal them.

The basics are deceptively simple, hiding depths that only show up with experience. The board starts out with a few flowers popping up randomly while the fox watches over it, and you tend the garden by either combining or seeding the plants. There are six types of flower, ranging from a single-leaved sproutling to a six-petaled bloom, and you can only merge like with like. Two single-leaf sprouts merge to form a dual-leaved plant, two of those can be merged to form a single three-leaved one, etc.  A little simple math shows it takes 32 single-leaf sprouts to create a single six-petal flower, and to do that you need to manage the board in such a way that you don’t accidentally block yourself.  Creating two five-petal flowers doesn’t help much if they’re too far apart, after all. 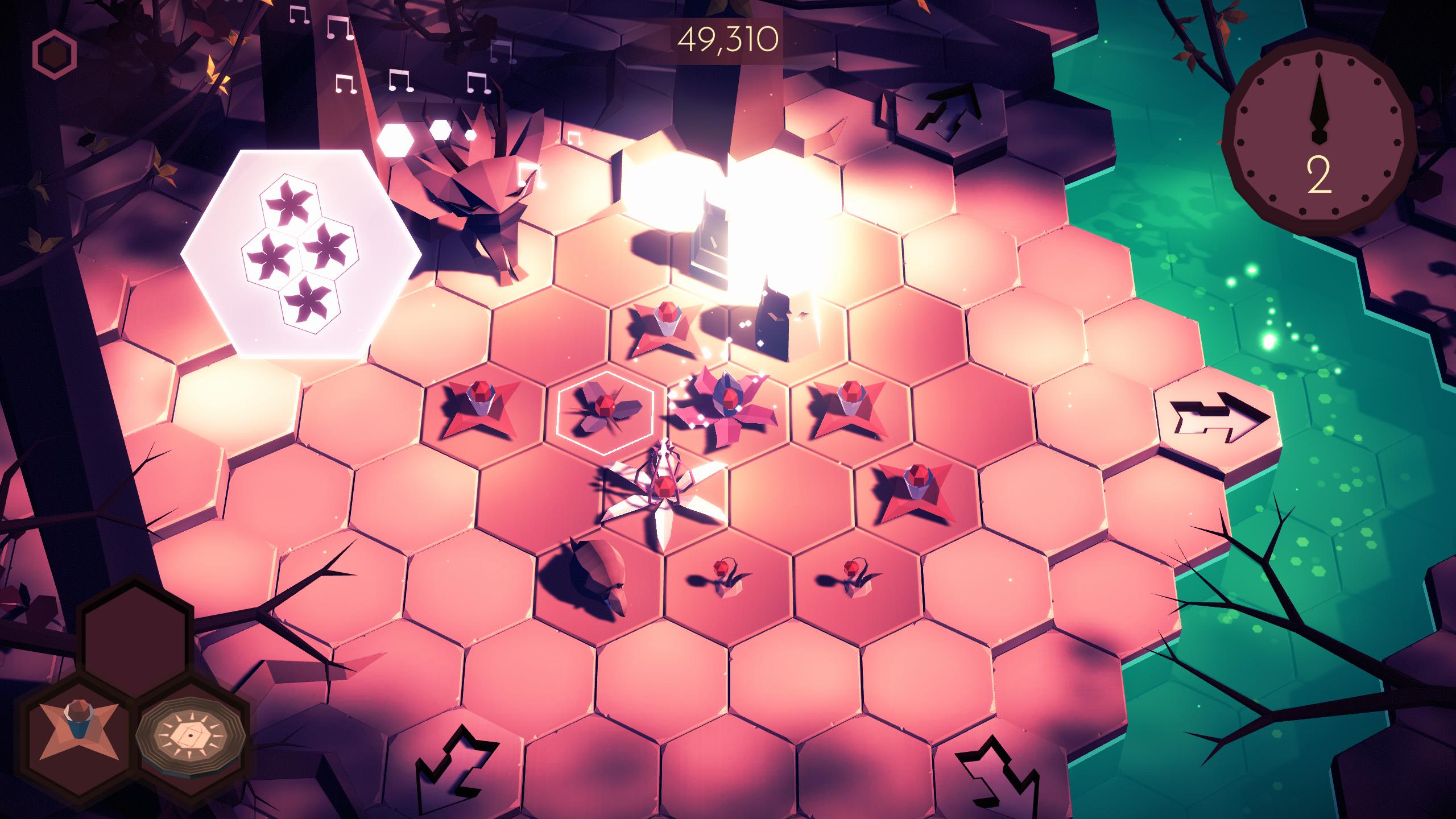 You can combine flowers only if they’re on touching hexes, and do this as often as you like in a turn so long as there are open moves.  Once you’ve combined as much as necessary for that turn the last step before the end is to seed the empty hexes, which is done the same way as combining by simple sliding on a flower to the space you want it to effect.  This causes it to drop its berry onto the empty spot, and once a flower is berry-less its moves in the current turn are done.  The length of each game is defined by how many turns are left, so it’s best to make sure you’ve done as much as possible before moving on.  Once the turn is over all the berry-less flowers grow a new one, ready for combining or seeding in the next round.

At each game’s start the fox gives you a move to spread seeds around before showing an image of a flower arrangement.  The designs are relatively simple, and completing one earns a free flower pickup that you can place on any open spot on the board.  Gameplay then becomes a flow of combining flowers with an eye towards completing the pattern, growing the board in an organized fashion while trying to manage far more variables than are apparent to begin with.  For example, the free flower pickups from completing a pattern sit on the board taking up valuable real estate until you click on them, but seeing as the power-up pool only has three slots open it can be a good idea to let them hang out for a while.  The board isn’t particularly big, though, and a stray power-up can be just in the way enough that it’s worth using to free up the real estate, except that’s a decision you may regret later on when each new pattern takes more moves to build and a single free flower is the difference between success and Game Over.  That doesn’t even take into account spaces being locked by the stone heads or occasional wandering critter. 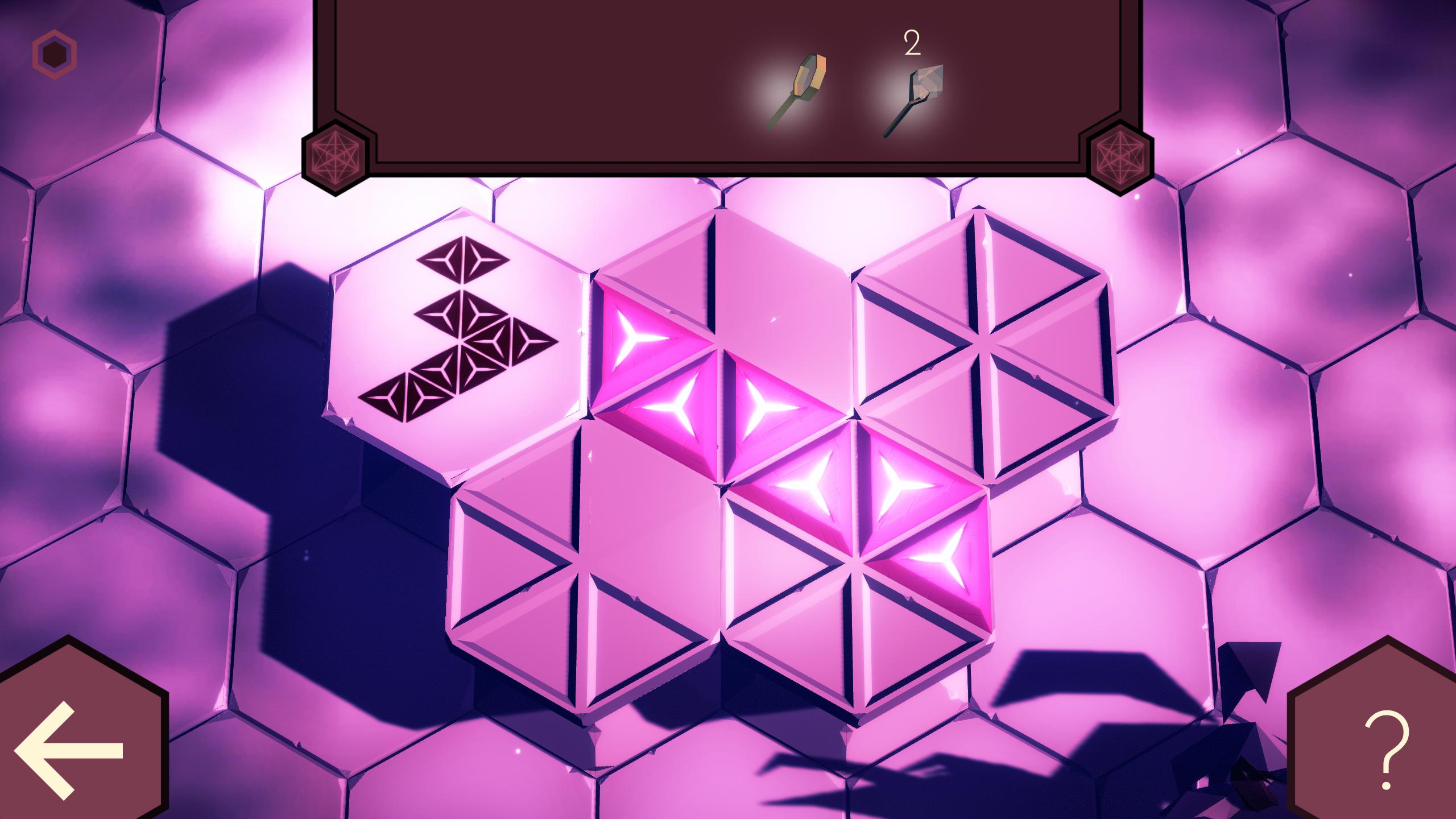 While the biggest plant you can create is the six-petaled flower, progress doesn’t stop there.  Combining two six-petaled flowers earns a stone head, and these pay off in a number of ways.  The most important thing is that stone heads grant three extra turns, extending the game beyond the eight rounds you start with.  The stone head can be activated, causing its eyes to light up and earning one more extra turn, and completing a certain pattern erases them from the board and replaces the linked heads with a pillar.  If that’s a bit cagey on the specifics it’s because Evergarden is a game of discovery and secrets best uncovered on your own, but the point is that as you progress the board is getting cluttered with objects that take more and more effort to clear off.  Maybe it’s as simple as having a section blocked off because you’ve got a one-petal, two-petal, and three-petal flower hemmed in by elements you either can’t or don’t want to move, locking the entire section.  Maybe the stupid armadillo spawned in just the wrong place and wandered somewhere even worse.  It could even be something as simple as getting caught up in combining flowers while forgetting that this flower was supposed to end up over there, not here, but it was almost a brilliant plan except for the execution.

Eventually, though, even the best-played game runs out of rounds, at which point all the flowers on the board get pulled into the fox while the stone heads open up to reveal a triangular tile inside.  The main board of Evergarden is surrounded by a forest that contains various puzzles, and the tiles are used to fill them in and earn new upgrades.  There are records in the forest that, once their puzzles are complete, get added to the collection and can be chosen at each new game’s start to be used when necessary.  An ability like The Abundance, which makes the flower on its hex generate infinite berries, is best used at the start of a new game, while others like The Whirlwind, which uproots a plant so you can move it to an open hex, require more planning.  The hard decision comes from only having the three power-up spots open at any given time, so you’ll need a clear strategy to get the most from them. 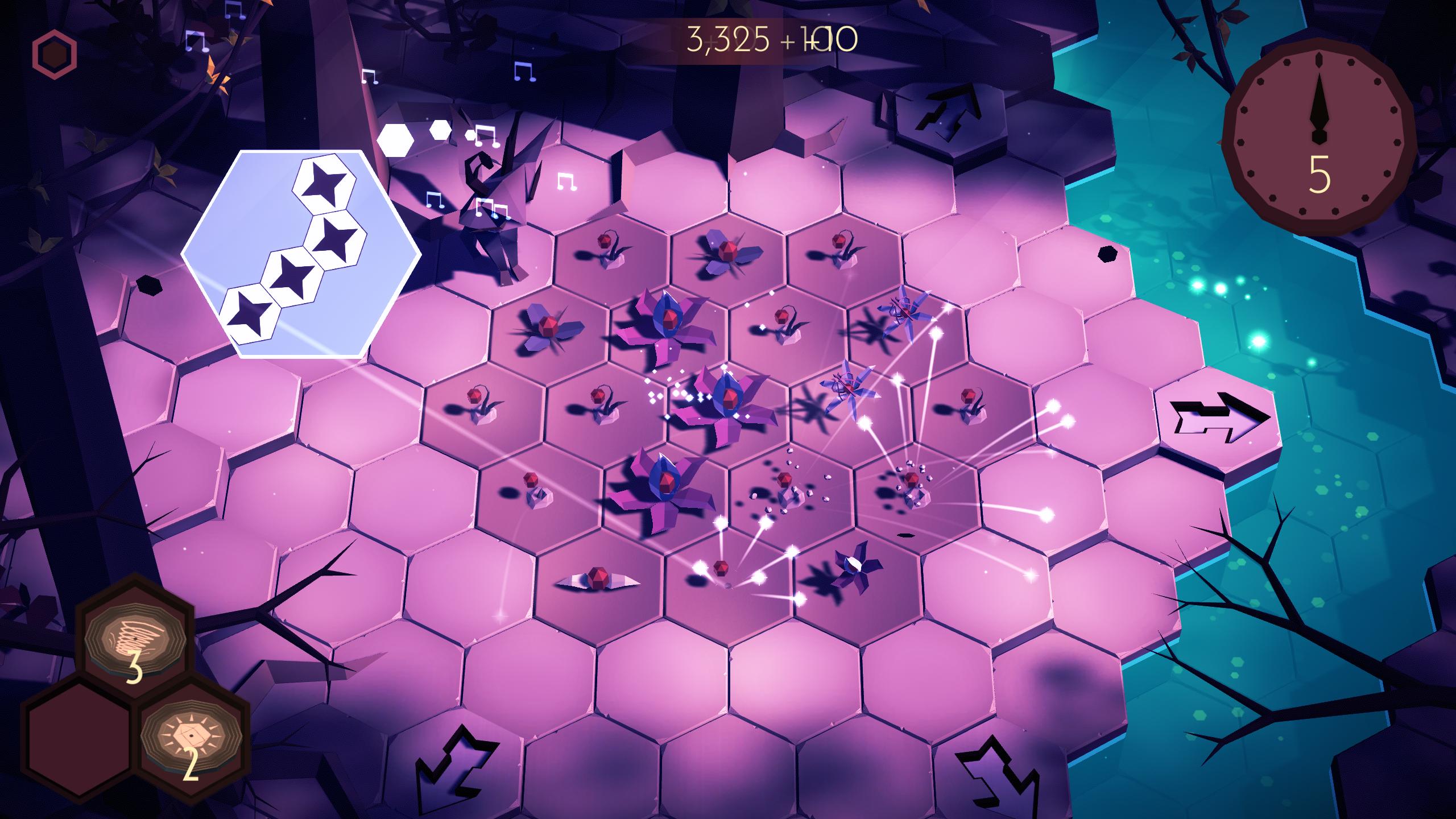 Evergarden starts off looking fairly simple, but the more you play the deeper its options become.  Initially I found myself focusing on building the fox’s patterns, but that meant there were spaces on the board being neglected when they could be better used growing and combining plants.  Then multitasking comes into play, but now that I’ve got more options open I’m building patterns faster and the board is getting cluttered with power-ups.  Next up is re-balancing the power-up usage and now I’ve got multiple activated stone heads hogging valuable real estate, but the fact that they’re linked together with light beams means there’s a hidden strategy to do something about them if I can only figure it out.  Every aspect of Evergarden’s design is linked to multiple other parts, balancing challenge and opportunity into a single puzzle-y mass that makes perfect logical sense once you figure out the patterns.  And even if the current round doesn’t work out as planned the next game is another chance to figure it out, with no clock and no pressure beyond the curiosity of what other secrets may be hiding in the forests of Evergarden.