As a publisher, Daedalic Entertainment has managed to carve out a solid niche for itself. Focusing primarily on old-school adventure games, their publishing output tended to be lower budget throwbacks to the days of yore. It’s paid off for them, with the Deponia series garnering its fair share of fans of Lucasarts style SCUMM games and scoring the license for Ken Follett’s The Pillars of the Earth, capturing the minds of the literary flock. They found themselves in an enviable position with this strategy, with their mark on a product meaning that there’s something interesting behind the wrapper. Instead of resting on their laurels, though, the company has decided to take a bold chance. State of Mind is that risky proposition. It leaves the developer’s comfort zone way behind. It’s flawed and odd looking. It’s also bold, engrossing and an absolute must-play title.

It seems prudent to describe what State of Mind is as a game first. A narrative-driven adventure experience, the game tasks players with unraveling the mysteries surrounding the lives of the protagonists. There is none of the “random item” puzzles that the studio seems to love. Instead of feverishly combining objects to create a new object that can have some effect on the solution to a puzzle, the interactions are entirely story based. If a bouncer is blocking access to a club that our hero needs to enter, look around. There’s probably someone nearby that can lend a hand. There’s no scouring the environment looking for some random tchotchke hidden in a pixel inhibiting progress. This is all about drawing the player into the tale. If this brings to mind Telltale Game’s output, that is fair comparison. State of Mind, however, is nowhere near as formulaic and tackles its story with more interactive elements in the form of minigames.

To hang pretty much everything in the title around the narrative, it’s important that it’s a good one. This is where State of Mind absolutely delivers. Set in the year 2048, it focuses on two primary protagonists. First, there’s Richard Nolan, a tech journalist for The Voice, the premier news source for his hometown of Berlin and the world at large. Specializing in technology has imbued Richard with a hatred for the advancements of the age. The player is introduced to him as he is recovering from an accident that has resulted in some short term memory loss. Yes, amnesia is an overused trope, but State of Mind leverages it to go to some interesting places. 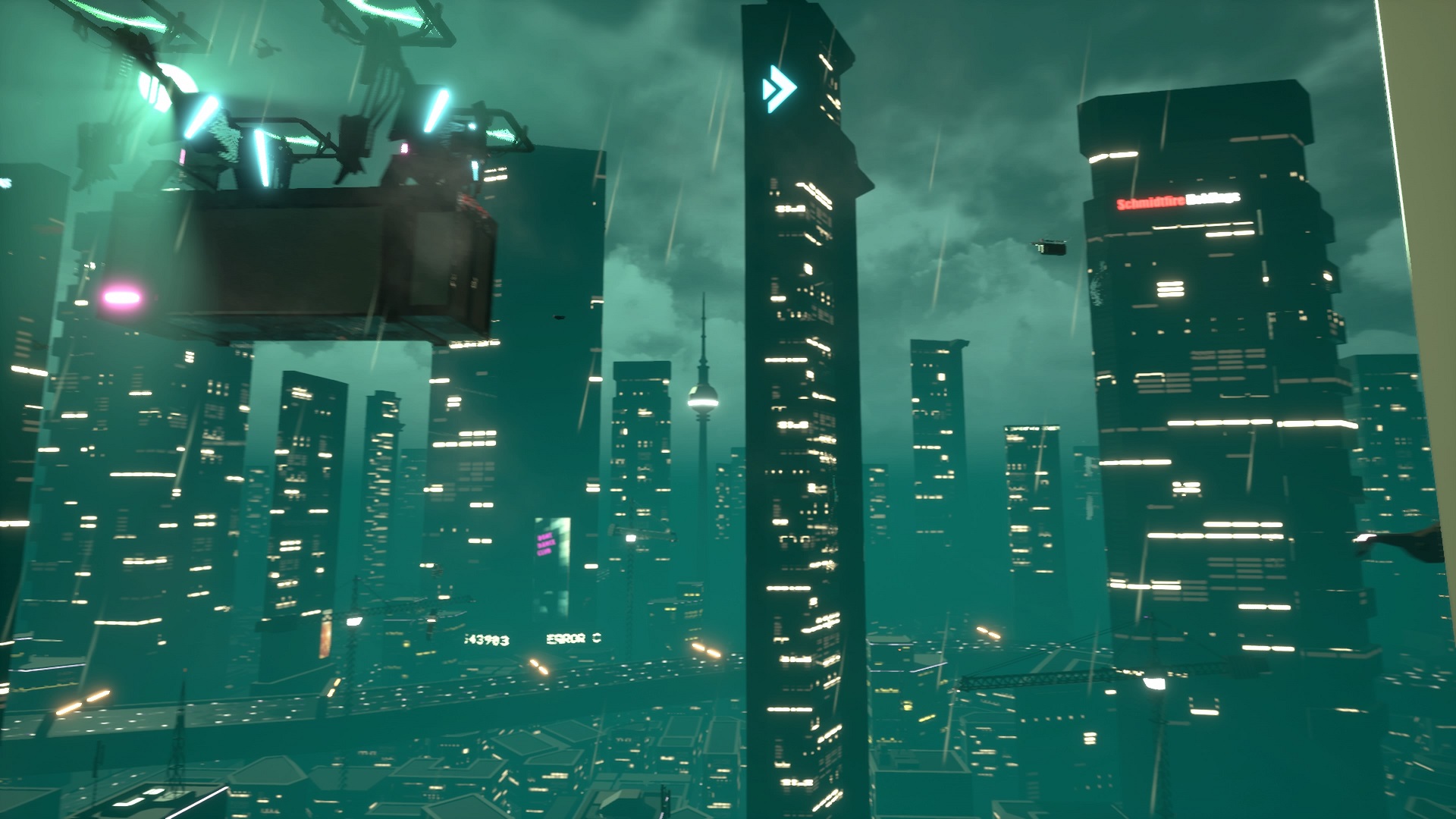 The other primary hero is Adam Newman. Much like Richard, he is also recovering from an accident and works for a news outlet. Whereas Richard is a bit of a sad sack, Adam finds himself living an mostly idyllic life in his home of City5. He has a family that loves him, he feels appreciated at work, and tends to have an overall positive outlook compared to Richard’s seething undercurrent of rage. The story itself focuses on the tie between these two and what that means for the future of the world at large.

Since the yarn that unfolds is at the core of the experience, it’s vital that one not give too much away. Even how Richard and Adam are connected is enough of a shocker that it would be terrible to ruin the moment. Let’s just say that there plenty of moments that elicit a wide eyed dismay or an exclamation of “holy crap!” The game’s author, Martin Ganteföhr, isn’t afraid to challenge the player with unique concepts. He obviously wants this work to plant the seeds of contemplation regarding the nature of being human and the role that technology will play in our lives going forward. 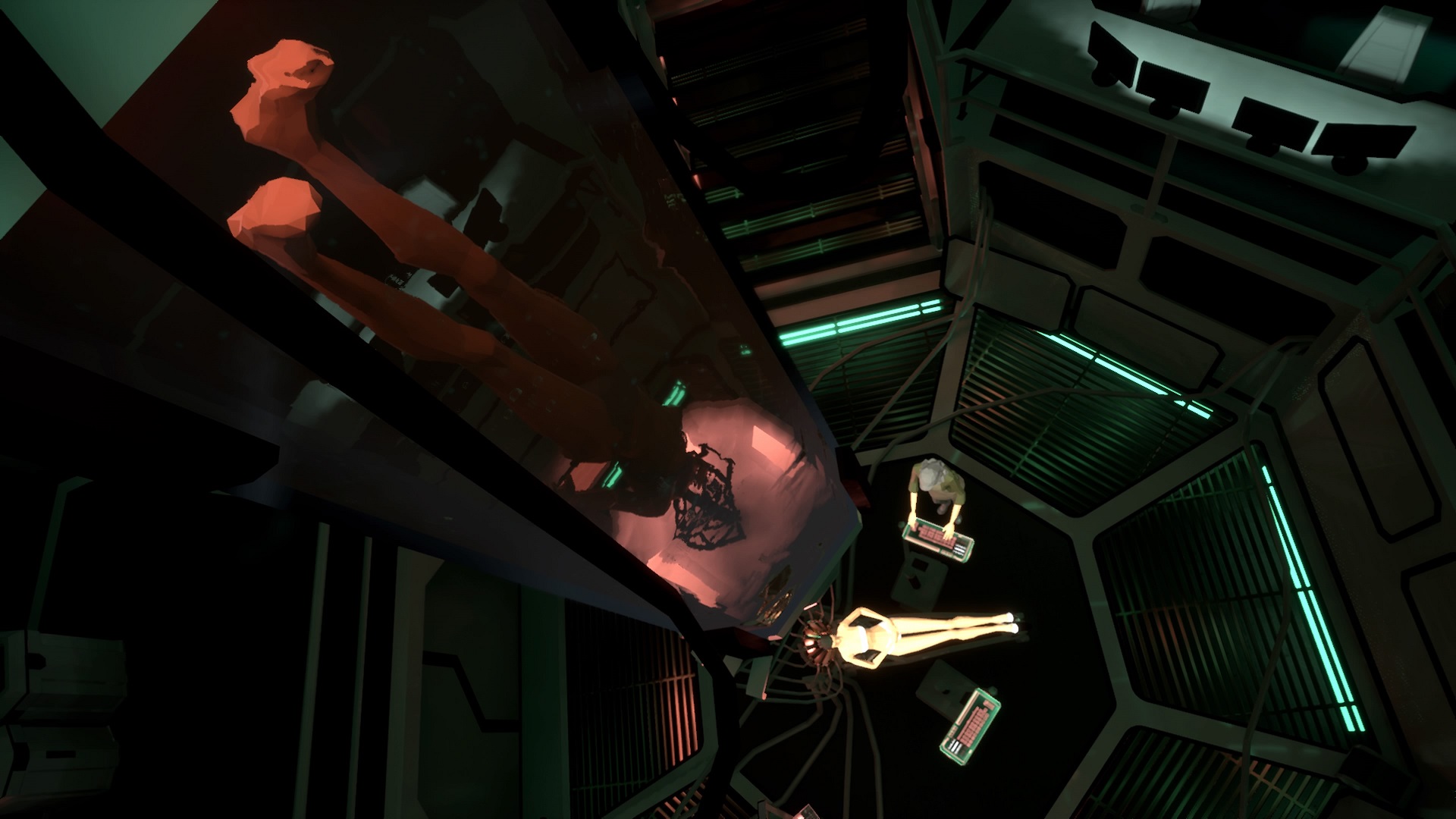 The great thing is that, much like last year’s Blade Runner 2049, it earns every moment. Nothing is cheap here. Emotional gut punches as certain new pieces of information comes to light weren’t haphazardly tossed in. There is smart use of foreshadowing (though, is it foreshadowing if the events in question already happened?) that leave little clues without beating the audience over the head with it. This does come at the cost of some of the narrative threads cast into the pond before they feel properly hooked and baited to snag the player, but this makes the point much sharper when it finds purchase.

While the broad narrative is told exceptionally well, it should be noted that there seems to be some trouble with moment to moment dialog. It’s not all bad, but some of the conversational turns ring hollow and stilted. As the author is German, it could simply be a problem with translation or English not being his first language. The issue does have a tendency to break the suspension of disbelief, which is incredibly important for what this game is trying to do. 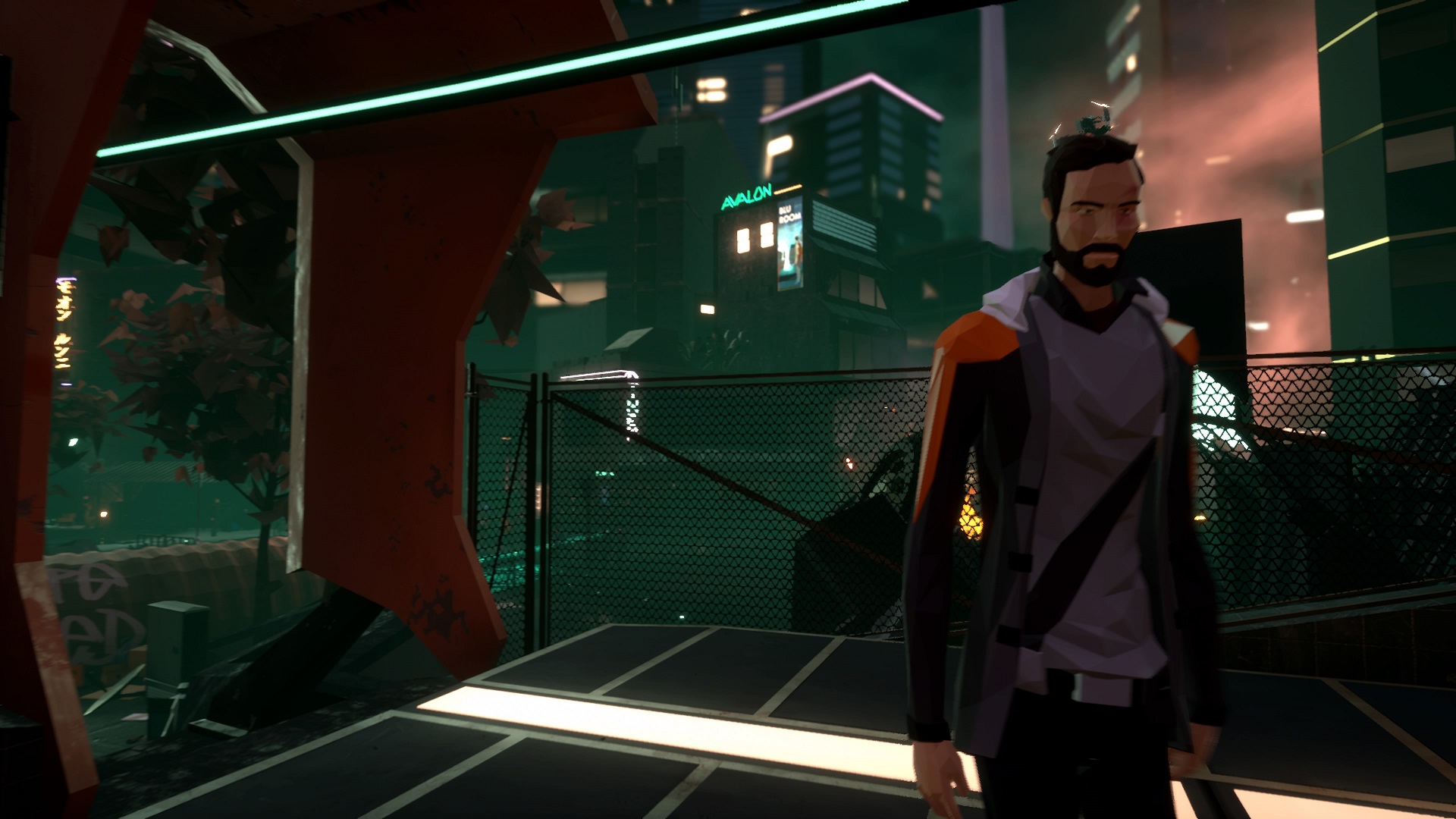 These same idiosyncrasies could also be to blame for some of the voice acting issues. The actor who plays Tracy turns in some great scenes and then completely plonks another in the drink, almost like she is struggling to deliver a believable read of the script she’s been handed. The character Charlie, on the other hand, is universally bad. His actor needs to be paranoid and a total jerk, and the performance is cringe inducing. Fortunately, these are aberrations. The rest of the actors turn in decent to great performances depending on the lines they need to read. A special shout out goes to the actor who played Simon, who managed to turn the mechanical character into a sympathetic and believable addition to the cast that serves as an anchor point for much of the tale.

The stylistic choices made in terms of looks manages to be both to the game’s benefit and detriment. In keeping with the technological theme, everyone and everything is angular, with lines heavy and sharp enough to slice an artery. It many cases it really works, giving the experience a unique flavor that isn’t being done elsewhere. Some of the shots of the skyline of Berlin and City5 are incredibly striking, and the diametric opposition of the filthy streets and antiseptic cleanliness of City5 comes across really well with this look. The problem comes in with the animation. It’s not all bad, but mouth animation is jarring and some of the movement feels way off. Clever editing, lighting, and obscuring effects can serve to cover up these inadequacies to create some visually stunning work. A stand out example is witnessing Lydia, a friend of Richard’s, at work during her day job. Other times, though, like during a particularly tragic flashback, make one wish that a little more could have been done to get the animation right.

Speaking of movement, the game also has some unfortunate foibles with direct control. There are many times with the player expects the protagonist to move in one direction and they going shooting off the exact opposite way. Before knowing the details of how they received their injuries, it would be natural to assume that both Adam and Richard stumbled out of a window due to clumsiness. There’s also an issue with lining up to an object for interaction to get the prompt to pop. Sometimes, it’s best to run in a circle and reapproach then to back up and fiddle with the angle. When control really counts, though, there aren’t any issues. The action based minigames control predictably and smoothly, and the puzzles, such as lining up tiles to create an entire image, or controlling a surveillance drone are trouble free. 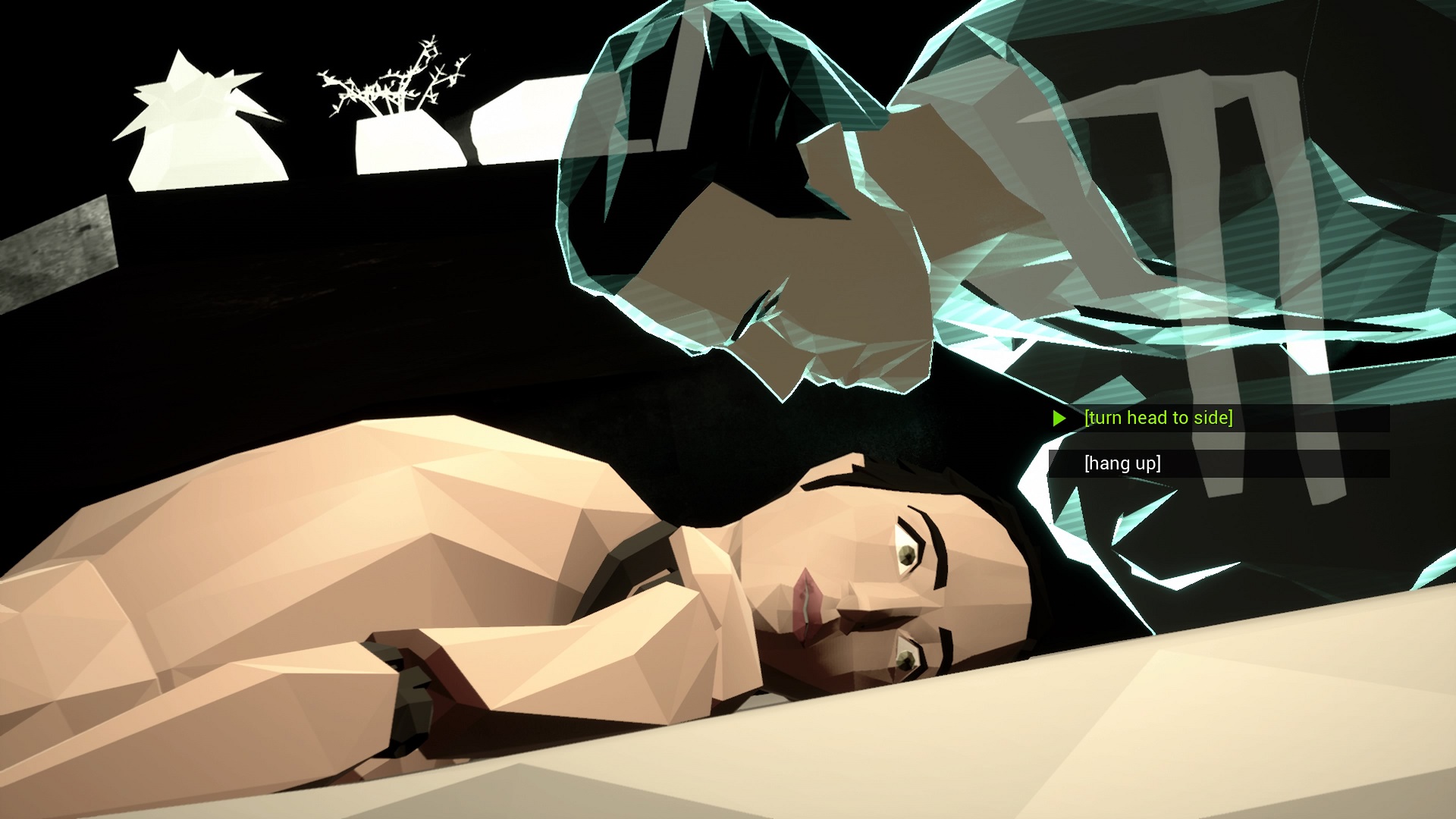 With a myriad of legitimate criticisms that can be leveled at State of Mind, it might seem like this is a title that would only appeal to a forgiving, niche audience. Thinking that way would be a shame. Despite its flaws, State of Mind is one of the few must-play games. The plot is thoughtful, deep and engaging, positing complex philosophical ideas to be interpreted and internalized while never talking down to the player. It’s got a stylistic look and feel that is interesting even when something is off. Fans of interactive fiction, stories with real substance, or just sci-fi in general owe it to themselves to experience this one. Bravo to Daedalic Entertainment for taking a chance on State of Mind. The end result pays off.