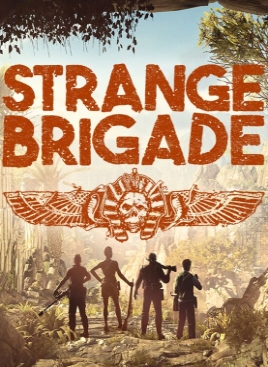 Strange Brigade is one of those ideas that practically seems like a slam dunk: “what if we took the gameplay from Left 4 Dead and transplanted it into the world of old pulp adventures and cheesy adventure serials?” That would be the basis behind Rebellion’s new third-person shooter, available now. Taking control of a group of daring adventurers, you and up to three other players and/or friends find yourselves blasting away the undead forces unleashed in the area around Egypt. And while the execution itself still results in a solid game, the end result ends up crumbling apart in a few notable areas, like the mummies you shoot down.

First things first, do not play Strange Brigade by yourself. Yes, yes, playing the obvious multiplayer game with multiple players seems like a no-brainer. But you do still have the option to go it solo and it’s not recommended. The overwhelming enemies and inability to split up and search areas means that levels just drag on and on, lasting nearly an hour each. In contrast, multiplayer sessions can go by in nearly half the time. Singe-player sessions may not be bad, but they aren’t nearly as half as fun as playing with friends.

Then again, it may just be that I tackled the first few levels in the single-player mode and those levels do not provide the greatest first impression. You may be expecting fast-paced action against waves of monsters, but not for a while. At the start, you basically just get shambling corpses that slowly walk towards you and the occasional mummy or armored goon. So for the first hour or so, expect less of a clever horde and more of a shooting gallery. It isn’t until the later levels when variety kicks in with the enemies and the game nicely puts up more of a fight. Fire-spewing revenants, teleporting ghouls, explosive skeletons and more begin to pop up, and things get more gleefully chaotic. 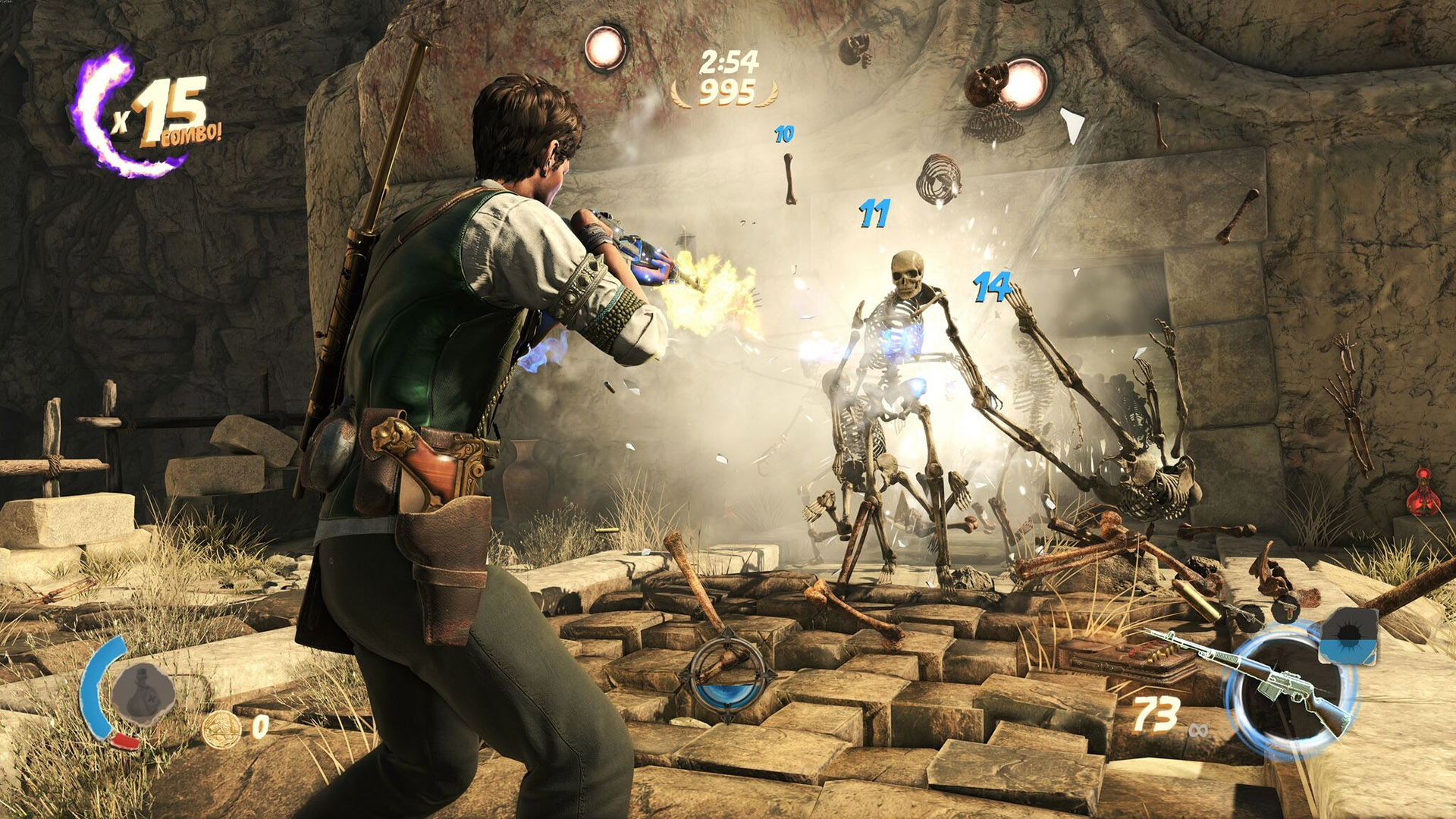 And yes, multiplayer does indeed enhance this by a ton. Suddenly hordes of creatures don’t seemingly head in one line, but split up towards each of you, and you find yourself facing attacks from all sides. It also means that you have to manage trickier enemies like giant bull deities and bosses with weak points with more finesse, distracting them and divvying up who attacks what from which angles. It’s not exactly revolutionary stuff, but it can still be a blast. There’s still a solid thrill in helping to save your partner from a group of skeletons creeping up on them, after all.

It does get repetitive, though. Again, the game keeps introducing a decent amount of enemies and bosses, but it can’t prevent obvious arenas and triggers from appearing. Strange Brigade also suffers from other gameplay issues as well, such as moving around. Characters just seem to have an awkward habit of stopping while having to change directions, which makes it hard during those moments where you need to run away and retreat or even when you want to leisurely check an area for secrets.

The game also has an amulet for each character that unleashes a unique special attack, filled up by absorbing the souls of defeated enemies. Launch a successful enough attack and you can even set loose enough souls to absorb and let loose another special attack to chain together, in a cool touch. But for some reason, the button for absorbing souls is the trigger button, meaning you can only shoot while aiming. No firing while running or shooting from the hip here, in an awkward design choice. And while ammo caches that characters can regularly replenish from are a naturally welcome addition, they honestly pop up so often that combined with ammo drops from enemies, it lessens the challenge (I’ve only had my main weapons run out of ammo once across many hours of gameplay so far). 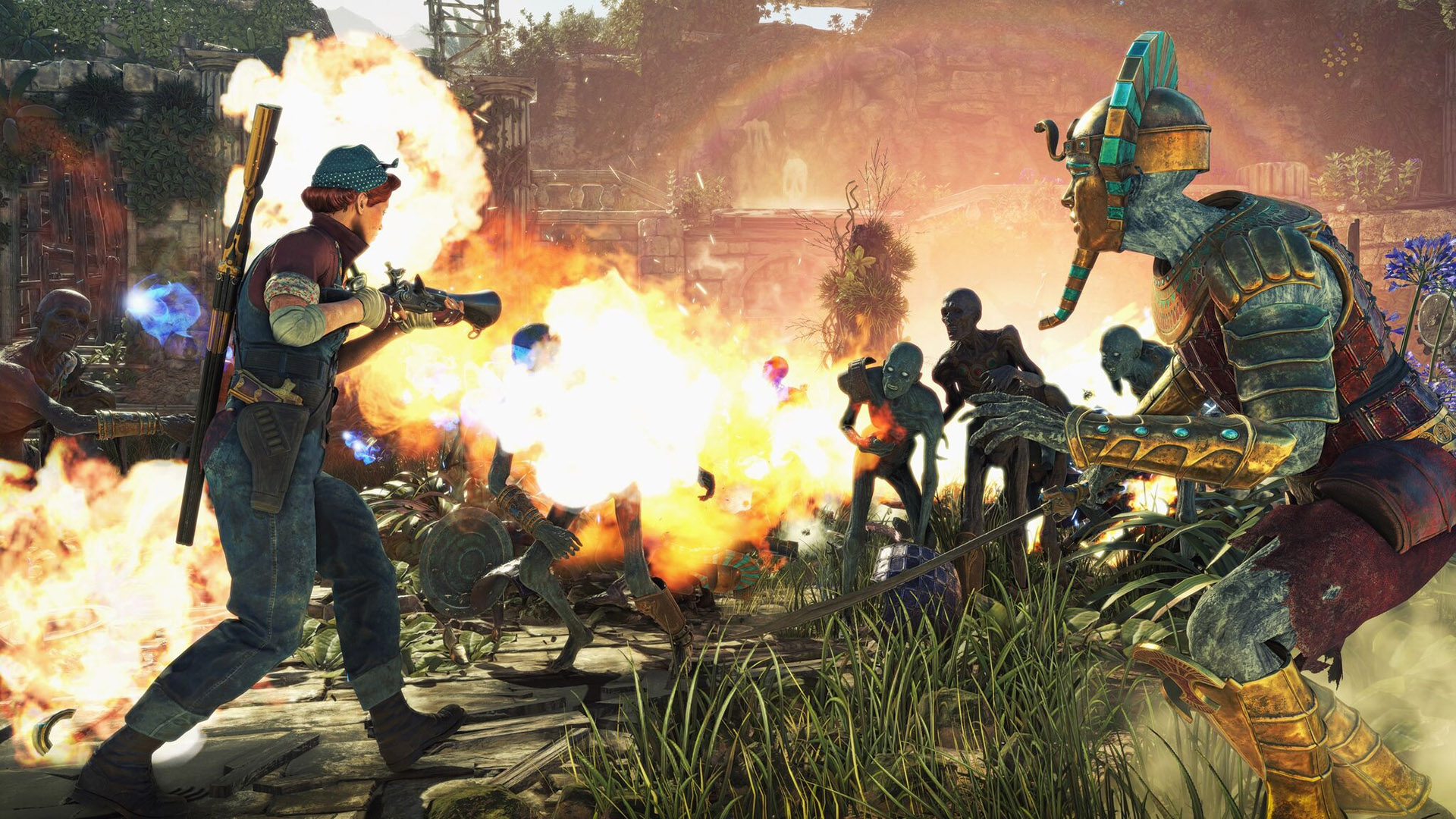 But again, a lot of these complaints do tend to slightly dissipate when playing with other adventurers. And it helps that the world of Strange Brigade is perfectly tailored for multiplayer action. Levels are typically wide and open, filled with jaw-dropping scenery and setpieces to gawk at that are straight out of old movie serials, filled with tons of detail. Booby traps to utilize in battle also come in many forms and are fun to experiment with. There are also a surprising amount of secrets around every corner (including cash that unlocks nifty new weapons both permanent and temporary that are a hoot to play with), encouraging exploration from everyone. Several of them are even tied into puzzles you can come across. Simple puzzles, like variations on Pipe Dreams or Concentration, but welcome additions nonetheless that provide a neat change of pace.

That being said, Strange Brigade can be unnecessarily vague when it comes to the aforementioned secrets. You’re tasked with shooting six optional cat statues to claim a golden cat at the end (along with lots of other treasure), but it never mentions what the cats are for. You’re also encouraged to smash some special pots as well, but I don’t even think that challenge is given a proper introduction. Even weapon upgrades are given this treatment. You’re supposed to uncover certain artifacts that allow for various boosts, but good luck at first knowing what artifacts to look for. And as one last kick in the pants, you can’t even share upgrades between players. If one member feels a hidden upgrade and grabs it first, you’re out of luck. Hope you like replaying levels to grab them again. All of these collectibles are nice touches, but could be implemented better.

Now, you may have noticed that we haven’t actually gotten to the story for the Campiagn mode yet. Well, it’s fairly simple, honestly. Seteki, the evil Witch Queen, has been summoned during an archaeological dig and its up to our elite 1930s task force, the titular Strange Brigade, to stop her. This typically just involves traveling across the land and destroying the Soul Cages that Seteki uses to entrap souls. The Serious Sam games may legitimately have a deeper plot revolving around the evils of ancient Egypt compared to Strange Brigade. Most of the plot is basically told only through pre-level cutscenes on the brigade’s zeppelin and the occasional radio broadcast at checkpoints in fact. Even the pulp vibe outside of scenery seems to be limited to the over-the-top narrator.

But let’s get to the characters themselves. After all, a colorful cast such as this has the opportunity to elevate the plot through their various in-game interactions and unique personalities that play off of each other! Well, too bad that witty banter never appeared. No, not that it wasn’t witty. I mean that it literally never appeared for me. 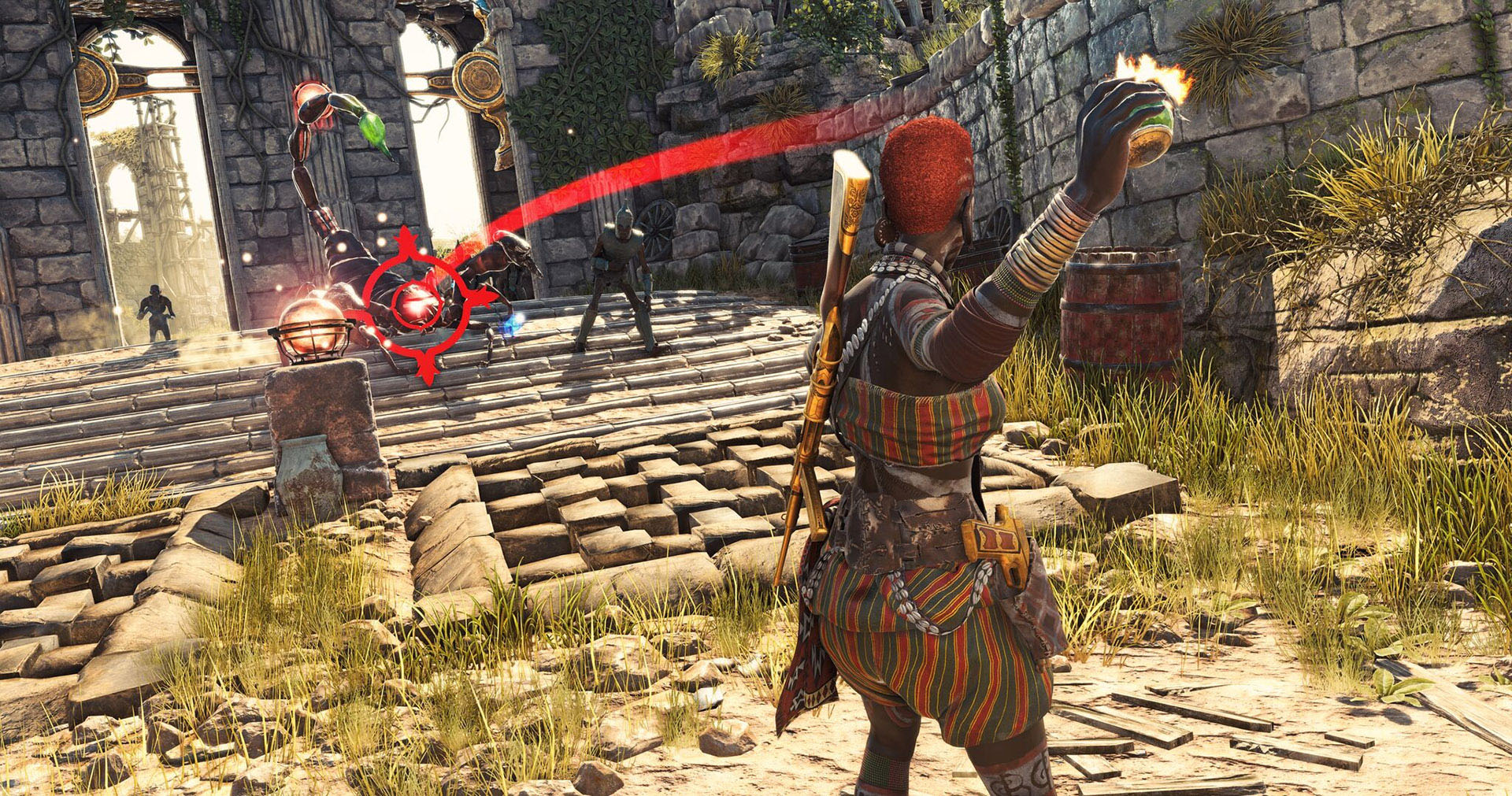 Yes, in what may very well be some bizarre bug in the review copies (at least for the PS4 version), absolutely no voice clips from any other characters appeared. Your player character will make comments, but not your teammates. And the same goes for the teammates. I played with two other Hardcore Gamer staff members and two random players, and we couldn’t hear what the other characters were doing. No clips, shout-outs, findings or anything. And there actually is an option to alter the frequency of the in-game banter, but it was set to the maximum. What the heck was going on?

Keep in mind, not only does this affect character development, plot and world-building, but even gameplay as well. Characters in games like Left 4 Dead will frequently comment when finding items and those in games like Overwatch will announce special attacks in grandiose fashion. Not only does this showcase personality, but it also provides a benefit for the players in the form of a simple way to know what’s going on and what’s been discovered, who needs help and such. Especially for those not using voice chat. The fact that an issue like this popped up in a multiplayer game is just baffling.

Mind you, it’s one hundred percent possible that Strange Brigade may receive a day-one patch by the time you read this, fixing the issue, but for me, it was such a jarring flaw for a game such as this that it actually threatened to impact the final score. Luckily, whatever points lost were earned back by the Horde and Score Attack modes, which each provide a more traditional and fun arcade-style challenge, and are actually surprisingly fun to play solo as well. So kudos to these bits as well, which provide a nice alternative to the longer campaign. 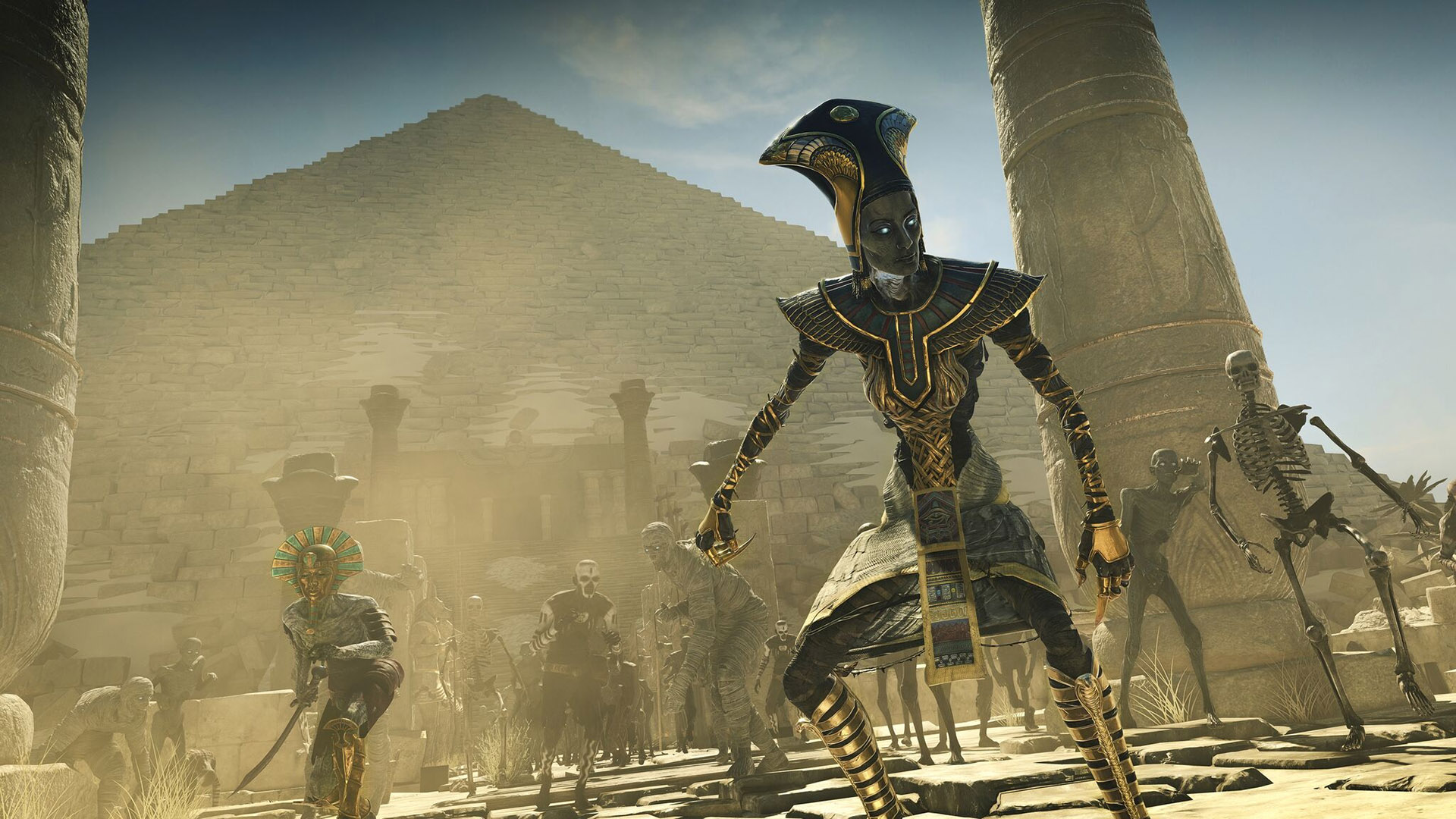 Strange Brigade is one of those difficult games to review, the one where for every positive thing you have to say about it, there’s a downside related to or accompanying it in some way or another. But in the end, what we have here is still some classic shooter action best enjoyed with friends, with enough eye-catching style and various challenges to potentially keep players coming back for more. So much like the pulp stories it aims to emulate, one could say that it’s corny and flawed in several aspects, but still an enjoyable romp that can be worth checking out under the right circumstances.