As gamers, we’re called to answer a challenge. Often that challenge means taking up arms as the hero of a title. Maybe we star as the protagonist of our very own drama; helping those less fortunate than us.  Video games give us a virtual space to be whatever we want. Some of our most beloved titles — like Halo, Legend of Zelda and Final Fantasy to name a few — have us using our powers for good to defeat an evil and save the world. We are the heroes of our stories. But what if I told you that battle doesn’t stop there anymore? What if we could continue the fight and be heroes in the real world by just playing the games we love? As Tracer from Overwatch puts it, “the world could always use more heroes.” Hardcore Gamer recently had the privilege to talk with CEO of Balanced Media Technology (BMT), Rob Atkins, to find out how this team of developers are using video games to solve real-world problems.

With a seriously hardcore background in gaming, Rob Atkins has done everything from development to lecturing at Southern Methodist University to help develop their world-renowned game design program. Starting out with a fine art degree from LSU, he went on to contribute to some of the industry’s biggest titles. With notable titles like Quake, Duke Nukem, Tomb Raider and Counter Strike under his belt, Atkins has seen every side of the business from marketing to developing. Working in marketing for three-and-a-half years and seeing how video games could be developed created new possibilities in the field. Once Duke Nukem shipped in 1996, Atkins saw what the industry was capable of. His passion did not stop there, however, as a fateful day in a Shreveport Coffee Shop opened up new capabilities for gaming.

“I want to do something with purpose,” says Atkins. Sitting down with Carl Lapeyrouse, founder and visionary of BMT, gave Atkins a whole new perspective of gaming. In a world of technological advances, BMT seeks to use video games to solve real-world problems. After seeing the project for the first time, Atkins saw it as a “renaissance” for gaming. Instead of using games solely for entertainment, what if we used them for something more? Atkins takes this approach and applies it to other issues in the industry,” there are so many things people don’t understand about gaming that they take for granted. Playing games to solve complex problems is where everything changes.”

Now, Balanced Media Technology is taking that philosophy and running with it. Utilizing what Rob likes to call, “edutainment”, BMT is at the forefront in engaging gamers with life-saving science while educating them at the same time. BMT develops its own games as a form of data collection. “It starts with an algorithm loop which allows us to put data into the system,” explains Atkins. Working with medical experts, BTM utilizes the HEWMEN crowd computing platform to combine human perception with raw computational power. The development team utilizes clustering algorithms that are trained and then reinforced by human input. The AI continues to learn as players pair data. This technology uses the online communities that already spend time playing games as a form of crowd-sourcing problems. Players can run around in Minecraft and at the same time, fight cancer.

In another example, Rob talks about their Wiley Wizard IP. The title is a classic arcade style shooter that utilizes this cluster data method. Players interact with this data clustering program by simply playing the game. Medical researchers code these sets with known medical compounds. These kinds of games can help researchers that are looking at up to 5 million different compounds. By taking data from the game, researchers can isolate combinations for which to conduct tests. In some cases, “it can be as simple as turning red blocks green,” says Atkins. Combining machine inputs and human intelligence is what BMT aims for in all its products. 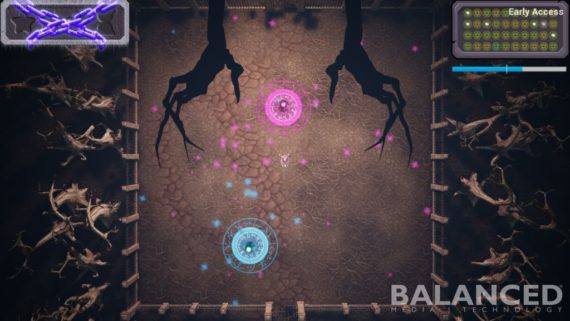 While BMT designs its own games, the company also seeks to create tools that can be embedded in all video games. Creating algorithms is at the heart of what BMT is doing. It may appear that BMT needs to create a game in order to solve a problem, but Atkins says that it’s actually the reverse,” the game isn’t as important. There just needs to be data put in and looked at by the player.” He explains that the game doesn’t need to be designed around the problem. The technology BMT is developing can be used even in classic arcade games. Instead, it’s all about the algorithms. These require input, but letting a human help it means utilizing power that is already being used. Atkins explains that his philosophy of “conscious capitalism” is about utilizing resources that are already there and using them to give back to the community. Through this idea, BMT also seeks to solve issues of wasted processing and computing power within the industry. 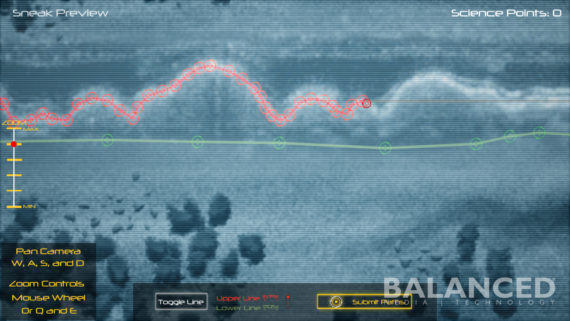 IPs like Eye in the Sky: Defender help map eye disease as players draw diagnostic lines in the game.

The idea of donating extra processing power may seem unbelievable, but it’s actually capable according to BMT. Through the idea of a volunteer grid super computer, it could be possible to harness extra processing cycles from others to donate to the problem solvers of the world. Rob explains, “If 50,000 people give 7% of their spare cycles to make a super computer, we’d have the largest super computer in the world. So much wasted processing power is out there. When someone installs our plug-ins, we can donate to the community and streamline the amount of data received.” What does this mean for the community at large? By sharing power cycles (on a volunteer basis, none of this is forced), this is just another way for players to help the real world by conducting their daily business. Researchers and scientists would receive this extra help from gamers without worry. BMT creates tools and plug-ins that can be downloaded into our products. “It’s citizen science,” says Atkins, and it could lead to even more possibilities in the future.

Using this kind of business model also opens up doors for additional revenue models. Rob explains that users who do want to sell, maybe, 10% of their processing power can help create a whole new business model. This gives more value to the people and could even incentivize developers. This model doesn’t even have to replace existing processing capabilities, it merely opens up the market for helping others. And that’s what Rob and the team at BMT are interested in. By creating a playful studio about bringing joy and connection to others, video games can be transformed into so much more. BMT seeks to give hope to others. With the mind-body connection being highly documented, BMT is also fully aware of the psychological impressions this research holds.  Rob recalls the story of a young child who was from the Make-a-Wish foundation. All the child wanted to do was make a game about fighting Cancer. Much to that child’s surprise, BMT had already made such a game, called 8 CELL, which utilizes algorithms to actually fight cancer in real life. Playing the game and visualizing Cancer’s defeat left such a psychological impression on the child that it also helped him to make a full recovery. Rob tells me that he was even able to start up school again recently. 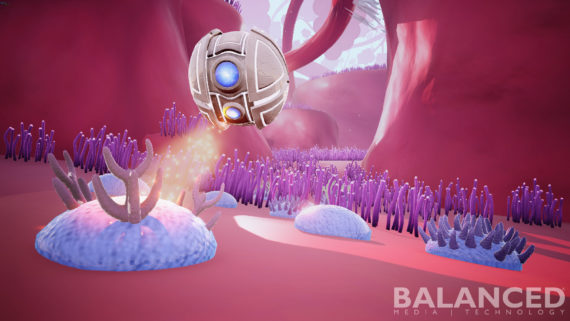 8 CELL takes players into the human body to scan for disease while learning about anatomy.

Video games have long been a form of entertainment. We’re able to act out fantastical feats and be whoever we want. Now, thanks to Balanced Media Technology, we’re able to play the games we love and be the heroes in the real world. Why not help those around through the games we already play? Rob Atkins affirms that bringing in real researchers and utilizing the time gamers already spend playing creates a whole new idea of video games, “I’m hoping for a shift in the wind; my games can do more than entertain.” If we all continue playing the games we love with the purpose of helping others, it would send an amazing message to those outside of the gaming community. Now we have the power to help the world and save others for real. Atkins even hopes to start including in-game achievements to let players know how they’ve helped others. Rob continues his passion alongside his team in the hopes of educating and helping others, “I love my team. I love the idea of what we’re going to do with gaming. We’ve been training gamers to be the hero all their lives and now they actually can be.”