Assassin’s Creed games are known as much for their story as they are for their gameplay, with Assassin’s Creed Odyssey showing no indication of breaking that tradition. Hardcore Gamer sat down with Narrative Director Mel MacCoubrey to discuss some of what players can expect in Assassin’s Creed Odyssey and how the changes such as playable character options and dialog trees that carry real consequences can impact that gaming experience. She also pointed out that Trojan contraceptives are not historically accurate, hence they will not appear as loot items in game.

[Hardcore Gamer] This Assassin’s Creed is different from previous ones where there is a choice playing as Alexios or Kassandra. What prompted this decision?

[Mel MacCoubrey] We started this project and were like, you know what would be really awesome in this franchise? Player choice. And we started thinking about how player choice impacts so much in this game it seems diminishing to say you have a choice in so many things but not a choice in who you play so it made a lot of sense to let the player choose between Alexios and Kassandra and have them be the same character with the same background but let you as the player make the choices that then define you and their experience. I’m very happy we did.

Playing as Kassandra in the backstory they showed Alexios as the baby brother they were going to feast on, at least I hope the father was joking about that. If I was playing as Alexios would they just switch roles between who is the younger and older sibling?

So they really are the same besides gender. I do like Kassandra’s voice actor a lot, she really conveys the sense of irritation with Markos. She has much more patience with him than I would.

(laughs) I love Markos so much and I can say that because I didn’t write him, I know who did and they’re fantastic but Markos is just amazing because he makes you feel really bad for him, and then he makes you feel like an idiot for it. I love that he constantly does that like Markos, I loved you for a second but ugh.

Yep. Markos, I owe you this debt because you took me in when I was a scared and lonely child but you are the dumbest and least reliable person on Earth.

Even when you meet him during the initial back story about when you meet him he’s like you can have this one thing if you do multiple things for me. But yes, I also very much appreciate the performance with Marcos and beyond since putting up with a character like him is really fun to both write and listen to. 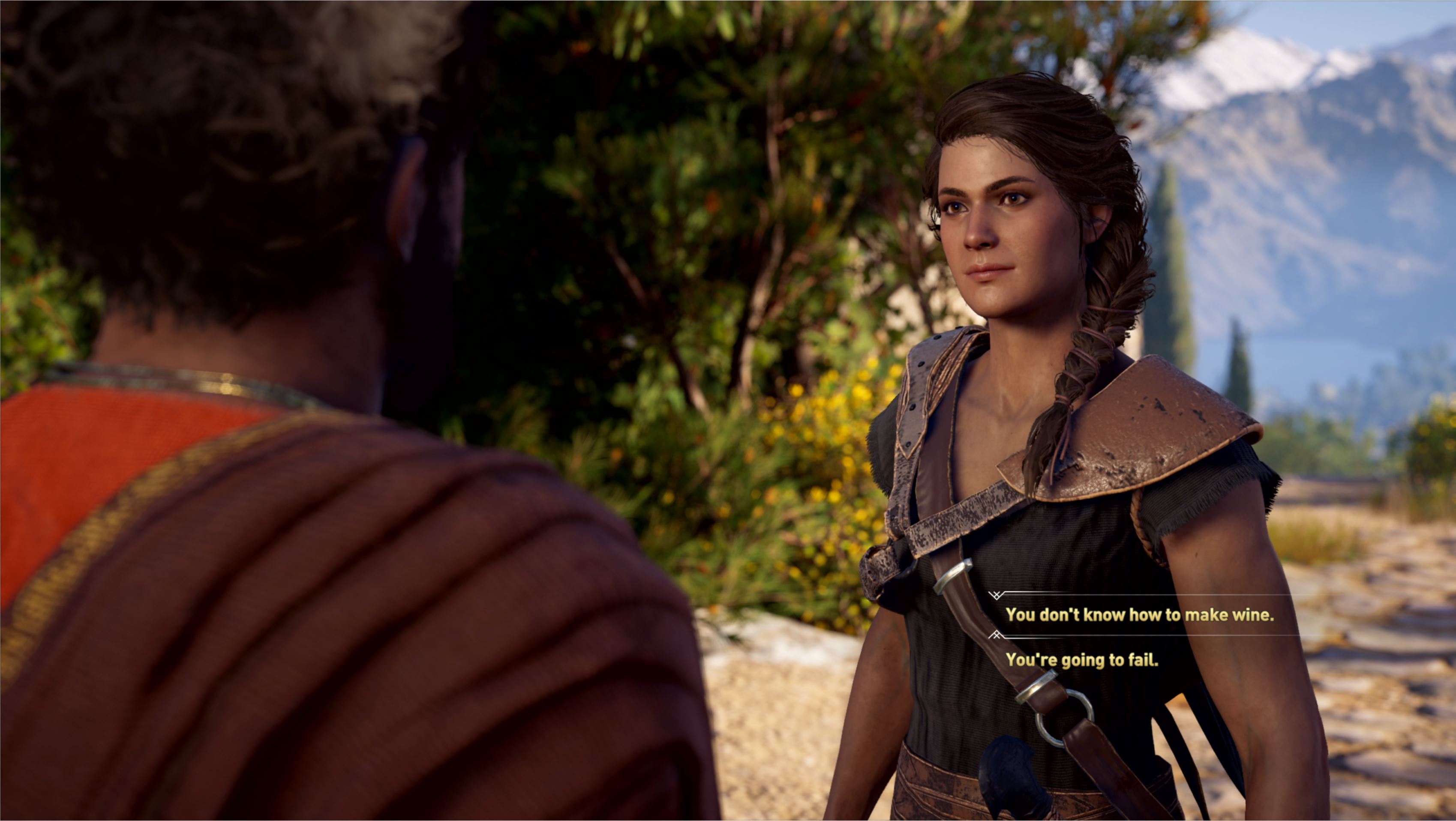 Branching dialog trees that impact that narrative seem to play a bigger role in this entry. How significantly can the story be altered through player conversation choices?

We have historical moments in game that happen as they were recorded, we did a lot of research about how these things were written down, who was there, what happened and retelling those moments as historically accurate as we possibly can. When it comes to a protagonist’s personal story that is where we involve choice so these two aspects as being separate. You are involved in history and meet people who were involved with these events but for your personal story you make successive choices along the way that give you different endings to your game so they do change the outcome for sure.

So how many different endings are we looking at?

I would love to tell you, but I can’t.

In addition to the choices there seems to be a greater emphasis on the RPG elements in this entry, what led up to that transformation?

We wanted to incorporate choice on the whole and I always thought bringing role play to Assassin’s Creed was going to be a really cool idea because from a narrative point of view you really get to explore characters in a multidimensional way. We do a lot of historical research and a lot of times, I’ve worked on Assassin’s Creed in the past, you have to pick one dimension of that character and portray them as that but when you have branching, involved choices you have to be able to write these characters who can react to the different things that you’re telling them who can change based on the way you talk to them or are completing quests with them. It’s really fascinating from a historical fiction nerd point of view like I really have to know these characters in order to write them. You always do but more so. We’d be in script walk meetings and writing a script for Socrates and stuff and going through like do these arguments make sense or can people follow them. But also, do they best represent this person, we’d spend so much time with Socrates we’d come out and be like “I am Socrates!” (laughs) and I think things like this from a purely narrative perspective is what makes this ultra fascinating. I think too that the franchise has always prided itself on being inclusive and diverse and the more you progress through the games the more that becomes true and here we are giving players more of an opportunity to be themselves that works for them or not. Choices have made a huge impact on the way we’re building the game but it is a really exciting impact.

I was having some fun with the dialog choices in one of the quests. After one of them Kassandra was flirting with Odessa and things seemed to be going really well but then after a subsequent comment destroyed everything and she stormed off.

You may see her again so you may have a chance to try again. Choice based romance is very new and experimental for us since we’ve always had romance in the main path before but because this is so choice driven we didn’t want to force a romance that you couldn’t get out of in order to complete the story. I was very nervous about choice based romance but since romance can be a part of life we decided to put it in and I was nervous because I didn’t want it to be like heres my cup, please love me, here’s some gifts, please love or oh look it’s a heart option and just keep clicking the heart option until we kiss or something since things don’t typically work like that. When we were building role play for romance we decided to make our own romance hub. You click the heart option to initiate it so you know what you’re doing since we didn’t want to accidentally make people romance anyone and then there are different options you can pick, some of them work and some of them don’t as you’ve experienced and they’re based on who the character is and what they like to hear. I have faith in you, maybe you can find her and try your luck again. 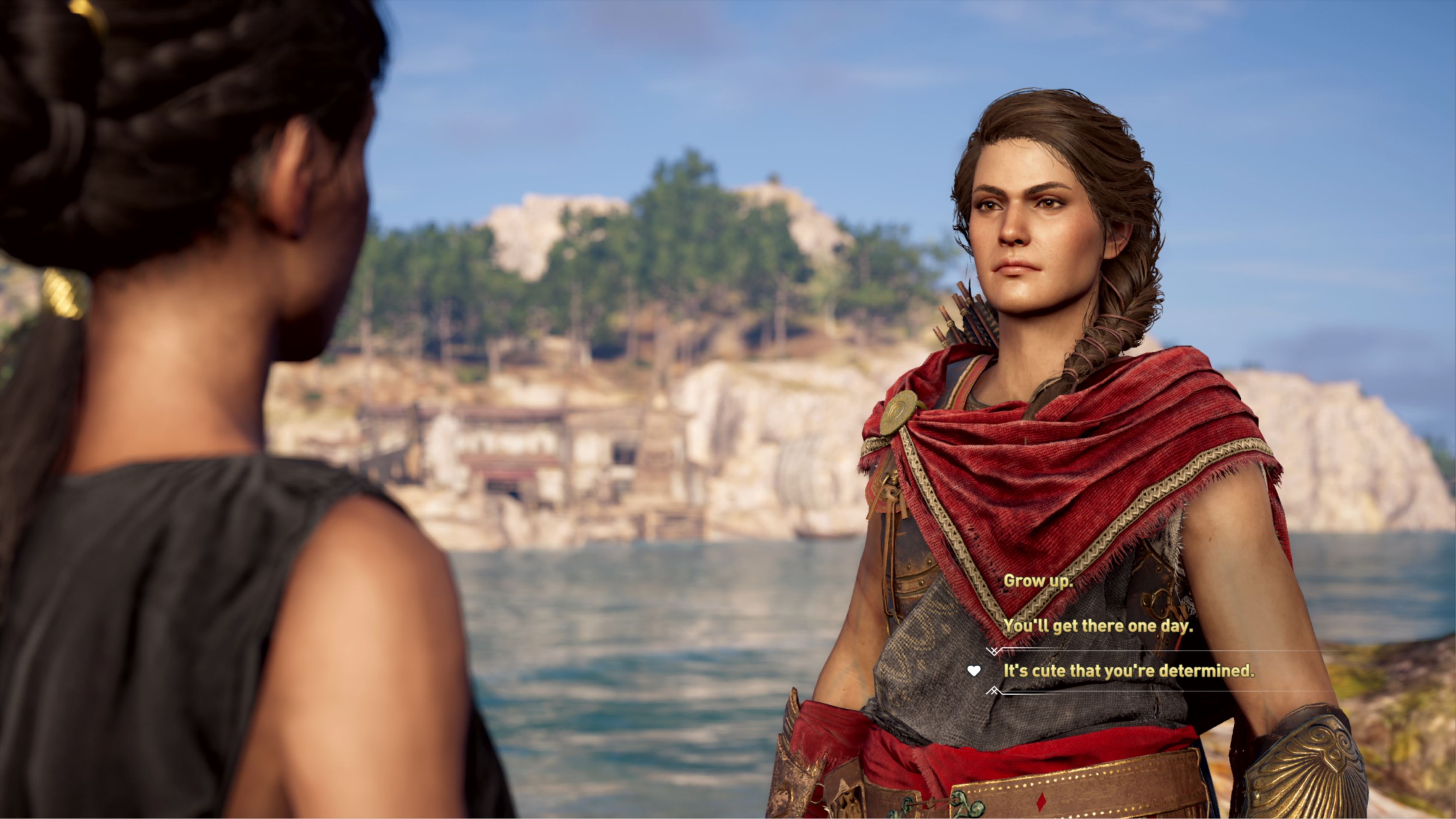 I was amused at how quickly that went south. I thought I only had that effect on people in real life.

After spending a few hours with Odyssey this seems like the next logical evolution from Origins. The core gameplay mechanics and overall feel of the game is very much in the same vein but there is now a greater emphasis on role playing and decision making. What are some other narrative changes that we will see in Odyssey?

We did do a lot with the roleplay and decision making but we also changed how we structure stories in the game. We used to write missions and now we write quests and the structure of these two things is very different. Missions are very long and drawn out, quests are very short and structured in a way where, I don’t want to spoil anything, but they are structured in a way where you are getting more story sooner and so that was a big change for us as well since we were having to figure out how to redo and restructure the game not only for open world but for choice based open world and figuring out how to pace a quest structure in this open world was fascinating and very difficult. I’m very glad we had the time to iterate and experiment with what we wanted to achieve and were trying to do but that had a big impact on narrative as well.

It seemed like I was going through quests a lot more quickly than I remember in the previous games and got a quite a sampling of Markos’s buffoonery early on. He is amusing, partly since I know a lot of real life Markoses.

Glad we hit a nerve there for you (laughs). 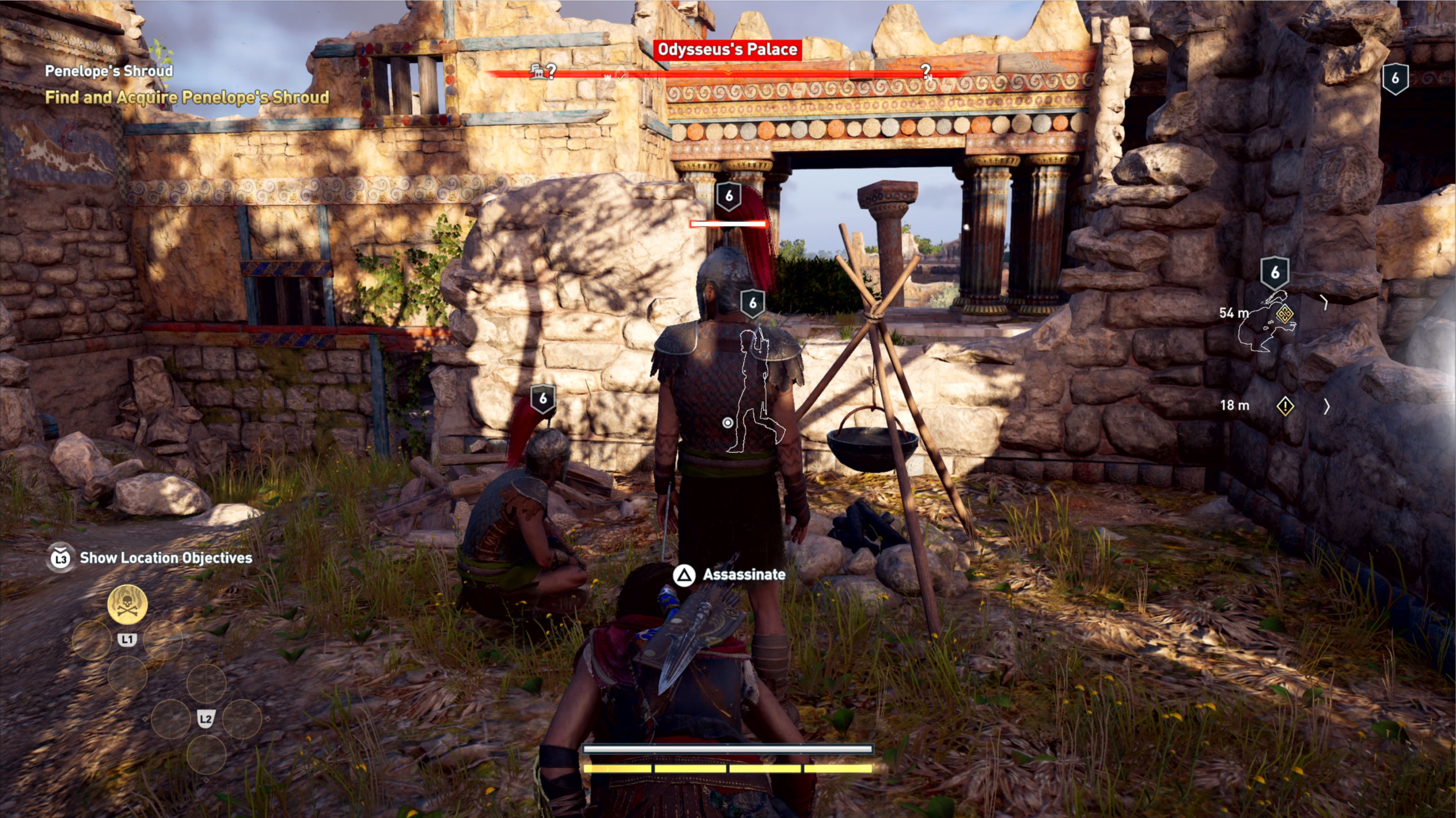 What are closing comments you would like to make about Assassin’s Creed Odyssey?

I’m really excited about the fact that, you wouldn’t have experienced this yet in today’s build, the way we built stories for the world since there are three big story arcs that take you to different places, but there are also a lot of regional stories that happen throughout the world as a whole and I’m really excited about that because the way we built that was, historically, the Greek world was divided into city states and through that we created regions through the Greek map and did a lot of research about what made these regions famous and what they were known for, what existed in these regions and based a lot of cool self contained stories out of those to help bring the Greek culture to life and bringing stories from myths to the forefront and I’m really excited for people to travel around the world and engage with these stories and engage in Greek culture and Greek life and interact with these interesting characters the team has come up and I’m super excited to see what decisions these players make and what they think of the outcome.