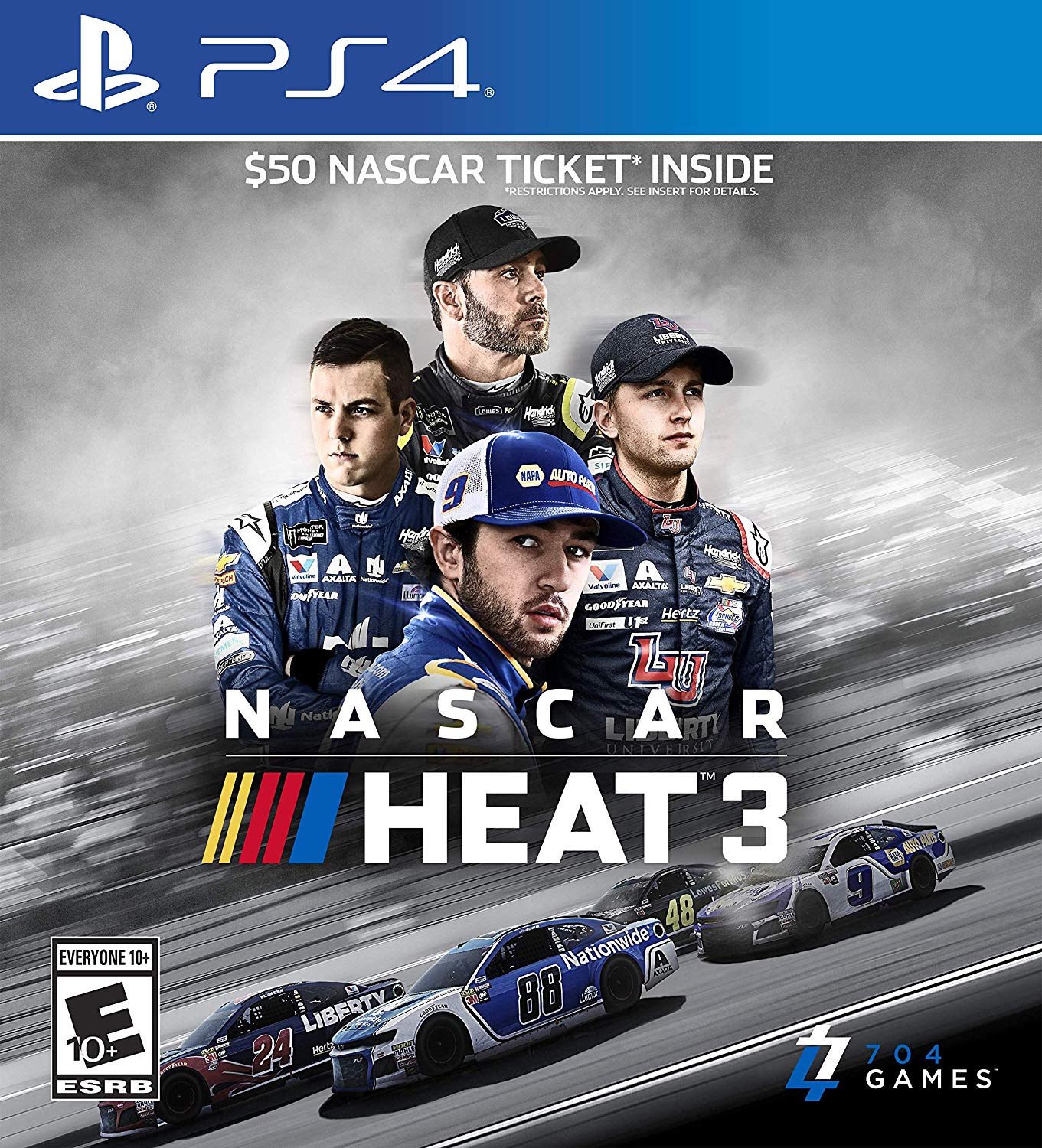 In this current console generation, racing games have evolved across the board. Between the visuals, physics and adding competitive eSports series to franchises, racing is quickly becoming the most realistic representation of real life competition. Developer Monster Games has managed to build its NASCAR Heat series into a major competitor in the racing market. With NASCAR Heat 3, the team looks to continue to build on a solid foundation and that can be difficult to do with a yearly racing title. Monster Games looks to have added enough to warrant a look for NASCAR fans.

The additions to NASCAR Heat 3 are fairly major. Last year, the team added the NASCAR Camping World Truck Series with the ability to race at Eldora Speedway on a dirt track. That became extremely popular and Monster Games decided to add a dirt racing series to this year’s game. The Xtreme Dirt Tour will have you taking late model cars around dirt tracks of different sizes. The cars handle different, feature two gears, and allow for a lot of rubbin’ and racin’. Besides Eldora, none of the tracks are official tracks, but that’s not a bad thing. You can race outside of Charlotte Motor Speedway or on Bristol in dirt. The team even added a dirt road course for some variation. It’s a new, different type of racing that is extremely raw and fun to play.

On top of the Xtreme Dirt Tour and the Camping World Truck Series, NASCAR Heat 3 also brings in the XFINITY Series and the Monster Energy Cup Series. Players can jump into quick races or compete for a championship as your favorite driver. More importantly, NASCAR Heat 3 includes the deepest Career Mode the series has ever seen. Players will jump onto the Xtreme Dirt tour and try to impress potential suitors for a seat. After that first season (which goes by quickly), players have the choice to join a team and simply race in that career or start a team. 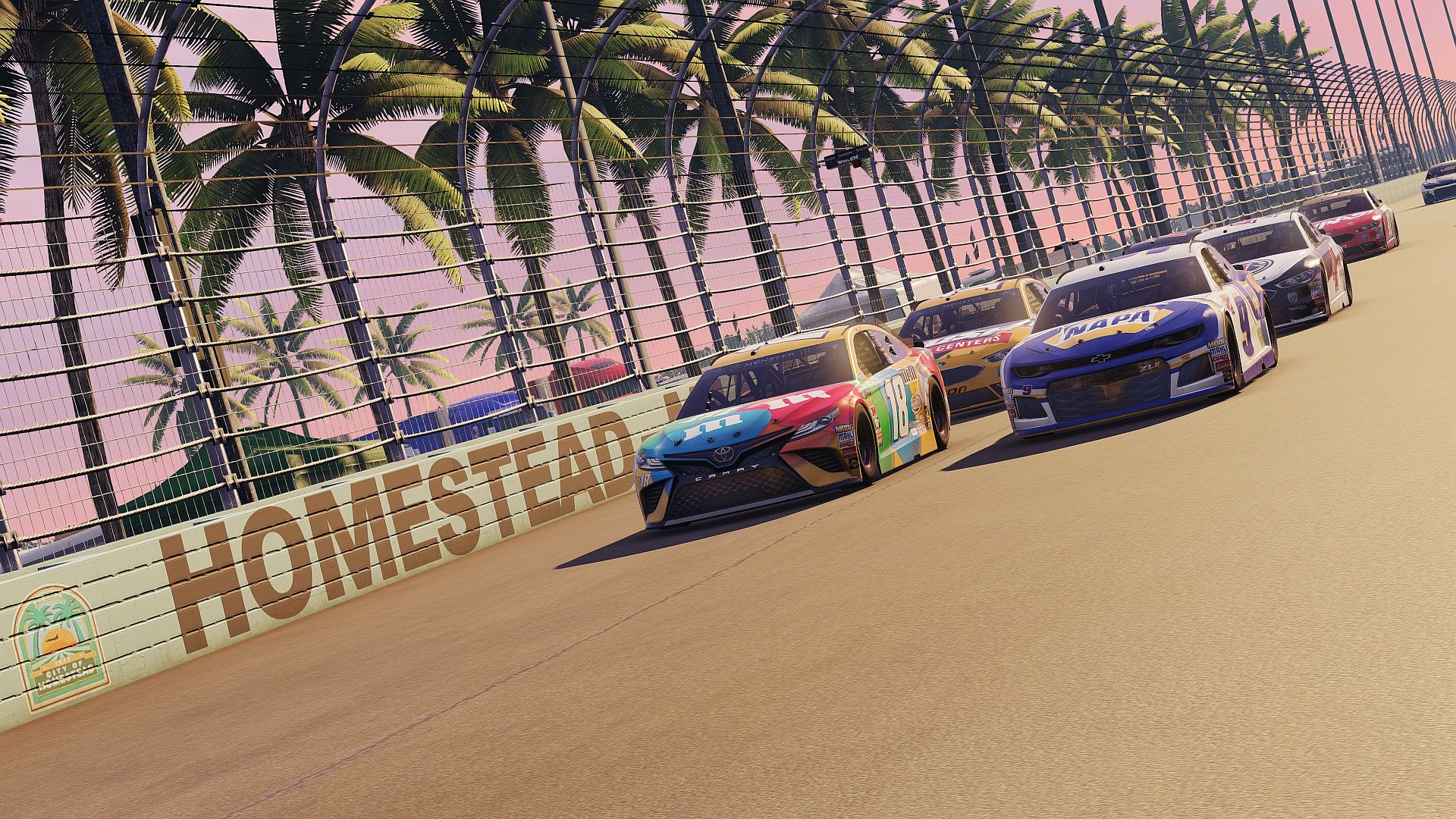 Starting a team in a career will allow players to create paint schemes and run a team. Impressing sponsors will earn cash and allow players to hire mechanics and engineers to build up their car. Additional chassis can be built, the mechanics can be leveled up and appointed to different projects. If you have one chassis that doesn’t match up with the track, you will get a statistical penalty that puts you at a disadvantage. Strategy gets involved when trying to build the best car for various courses. Couple this with building rivalries or friendships on the track and Career Mode quickly becomes a deep experience. The goal is to work your way through each series until you get to the Monster Energy Cup. All of the upgrading and managing is fairly simple to do in the career and will give you an idea of what it takes for a team to become successful in this sport.

While car setups are still a think in NASCAR Heat 3, some of the terminology can be off-putting to non-gearheads. This year, Monster Games has included nine predefined setups to help players get an advantage in a race. Basically, you’ll choose how tight or loose the car is as the screen shows the benefits of each. It’s a nice addition to include without having to adjust and test various options. 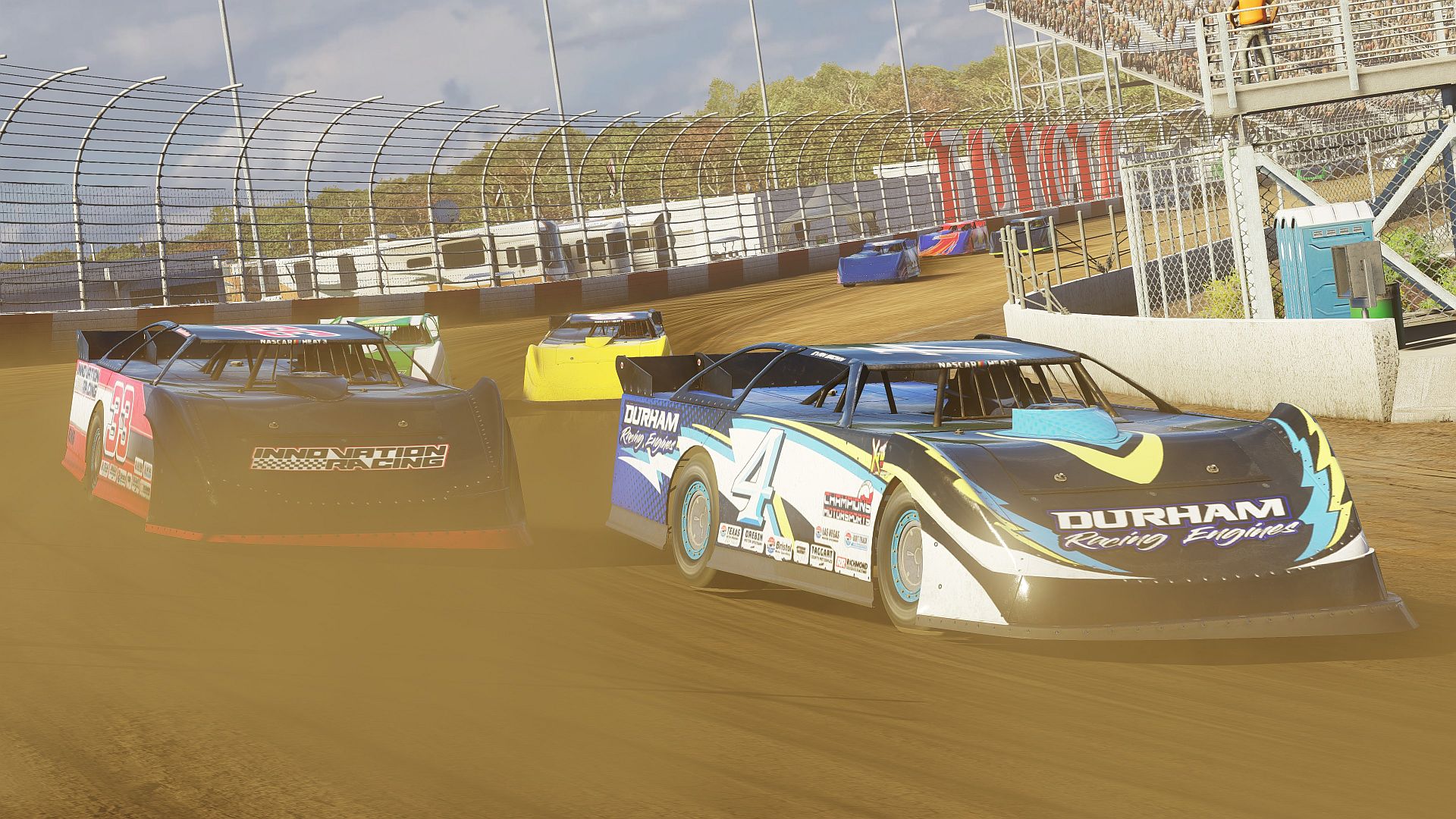 Races now start off with some stories before the green flag starts as that adds some personality to the race. As for the racing, the physics still feel familiar to the series. You are driving fast boats around and oval with competition around you as you draft and weave to gain positions. Even with the assists off, the cars are not difficult to drive as this needs to be upped some. In the real sport, wheel spin and getting loose just from a misdirection in airflow can cause trouble. For more casual gamers, the game does a good job of representing the speed and physicality of the sport. Accidents seem to be more toned down this year from the A.I., which does a good job of knowing where you are on the track. It does seem a bit more conservative this year, which does help with the flow of the racing. Racing with a wheel does not feel as intuitive this year, but racing with a controller does feel like the best control this series has had. Even with the rumble feedback at its highest setting, it still feels like it needs more. Both the wheel and controller are responsive, however, but the car does feel better controlling with a controller.

The visual quality in racing games just within the past year has raised standards. While last year’s NASCAR Heat 2 had sufficient visuals, the visuals here now feel dated. The car models stand out the best, but the details on the track just seem to be lacking so it can keep a high frame rate. Other visuals issues I have seen are some screen tearing and occasional hiccups during a race. Jaggies are abundant when the game is in motion on the track. The lighting tries to compensate and occasionally the reflections off the track are too much. Night races do look more pleasant, however. The crowd consists of cardboard cutouts outside of the cutscenes and even then the character models are lacking. With forty cars on a track, it’s understandable, but with less cars on the track maybe something dynamic can be implemented to help the visuals? This was also reviewed on a PS4 Pro. 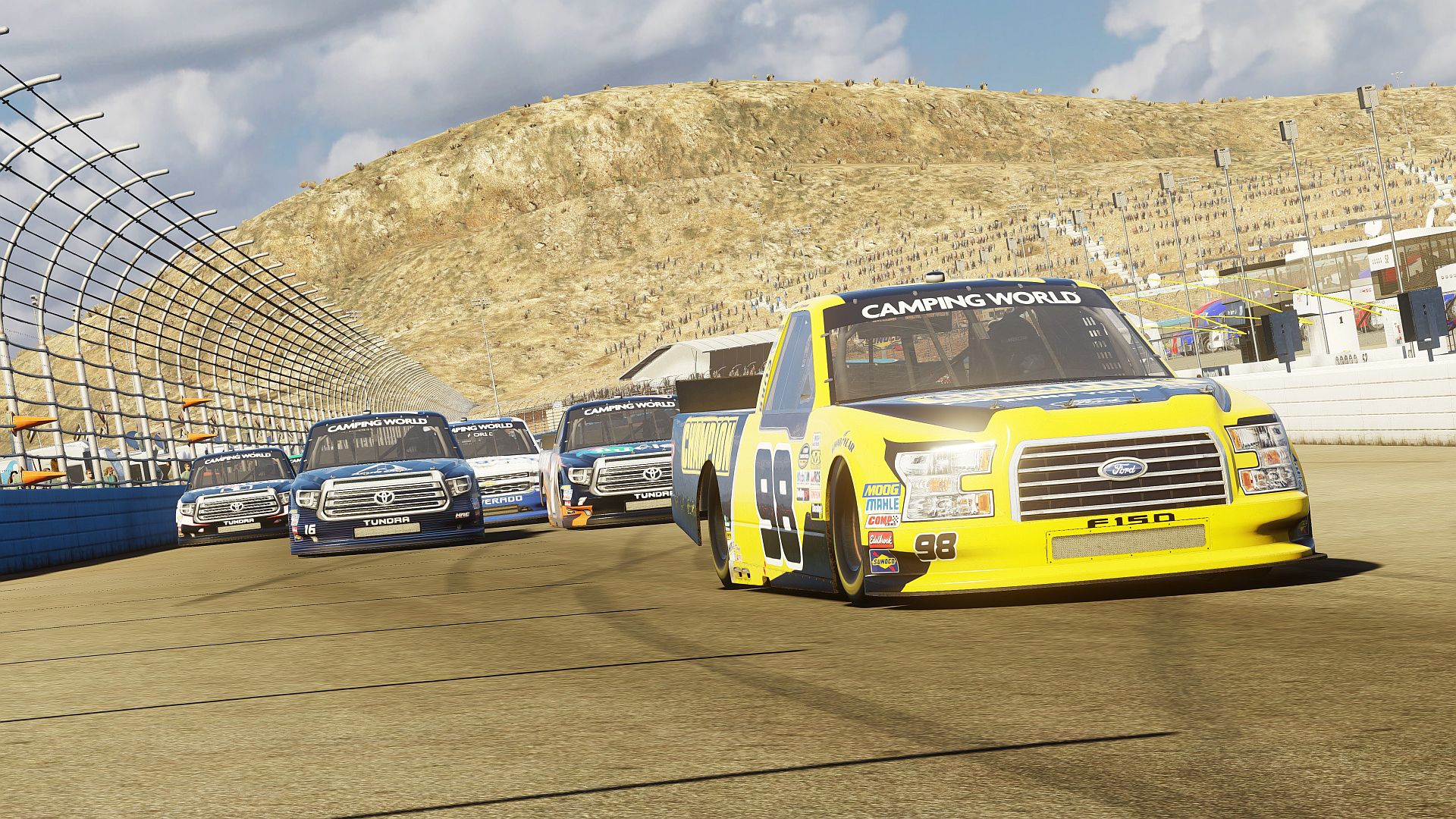 One thing that seemed to take a step backwards are the sound effects. Making contact with cars, while feeling right, took a drop in quality. The engine sounds under acceleration do not come off as realistic. When fully up to speed, the engine sound is sufficient. This is with the Cup cars, but the late models used in the dirt races are loud and mean. NASCAR Heat 3 still includes the spotter which is something that could be used in plenty of racing games. The voice is clear, understandable and still useful in navigating.

The game’s publisher 704Games teamed up with Motorsport Network to get its e-sports division going. NASCAR Heat 3 will feature daily and weekly tournaments to build credibility for something bigger. Online racing runs consistent and can support a full field of racers or have the online races mixed in with A.I. Races with only a handful of opponents can cause players to easily lose the draft. I only encountered one accident that involved lag on a car spinning, but mostly the experience was solid. 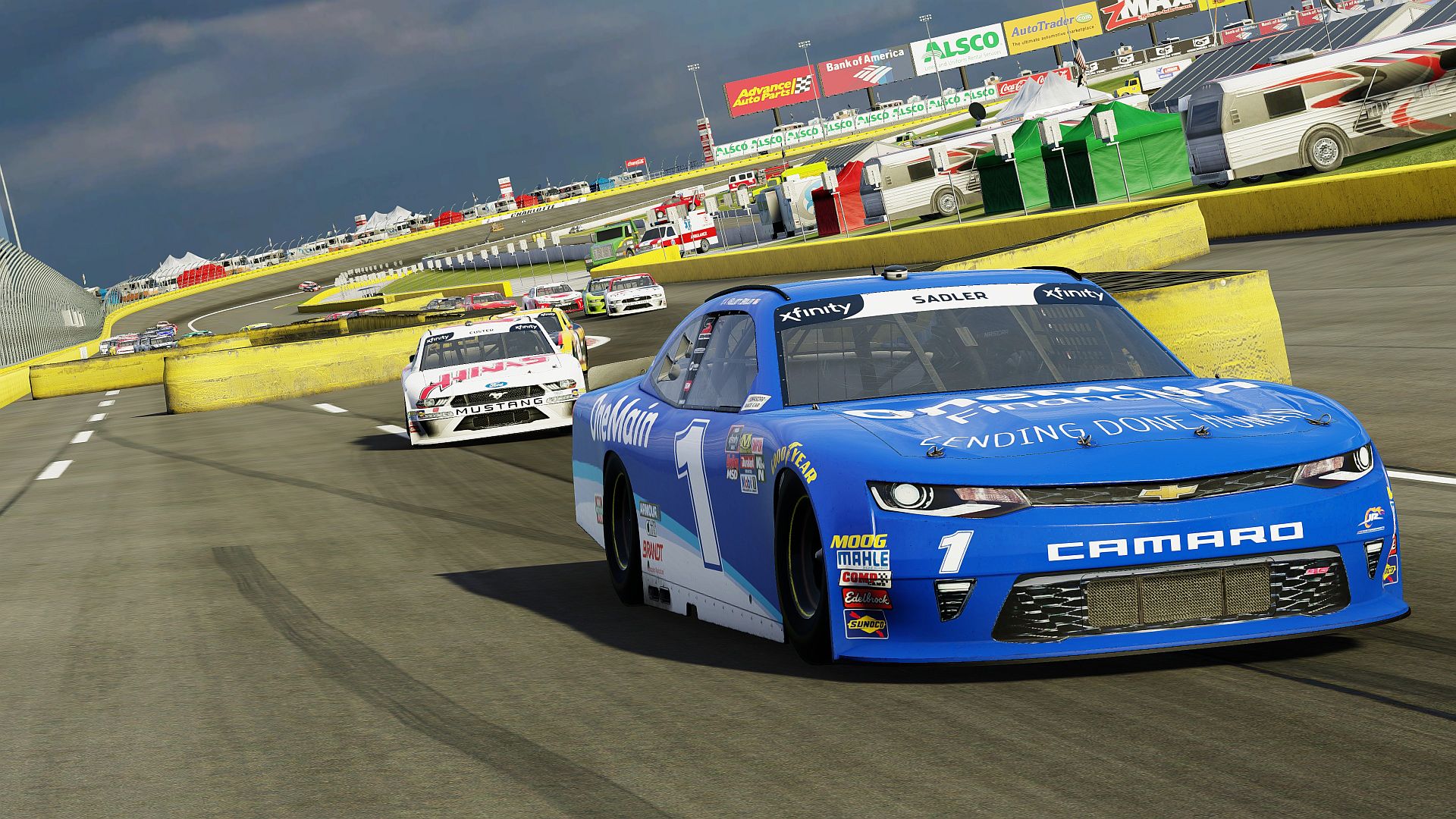 NASCAR Heat 3 is a fun and entertaining stock car racing game that needs to take more steps towards offering a simulation for racing fans. Opening up an eSports division should encourage the cream of the crop to represent the real life sport in a virtual world. Champions of other racing games have literally gone on to win great things. The Career Mode is deep and engaging and the Xtreme Dirt Series is an excellent addition to the series. The visual and audio issues are something that need an update, but there’s enough new content that the fans of this series will really enjoy.