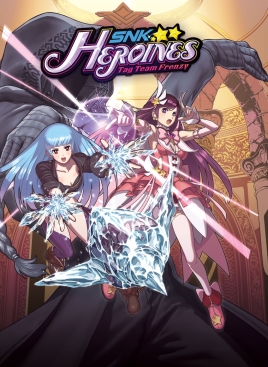 Ah, SNK. So many times from the ’90s onward have you blessed us with rich, complex, fun fighting games. And throughout several of those games, you’ve developed several amazing female characters, fully-fleshed out with impressive designs and moves, catching our eyes in more ways than one. After all, Mai Shiranui alone probably caused more than a few gamers to suddenly hit puberty as quick as possible. And with so many attractive and clever female characters, it actually makes sense to do a little cheeky spin-off fighting game like SNK Heroines: Tag Team Frenzy where they all duke it out. But much like the characters themselves, the game still needs to have something below its alluring surface, and that’s where things sadly fall short here.

So why exactly are the ladies of SNK battling it out here? Well, Kukri, a King of Fighters character, has basically transported several female fighters (and one gender-swapped Terry Bogard) into a pocket dimension to battle each other in a tournament, with energy from the losers eventually going towards fulfilling his goal of merging his world with the real world in order to achieve a massive amount of fetishism or…something. Oh, and Kukri has also dressed all the captured combatants in cheesy fetish outfits like catgirl costumes, policewoman uniforms, masks and more. It kind of goes without saying that the plot in SNK Heroines: Tag Team Frenzy doesn’t really matter.

Actually, going over the roster, the title may be a bit dishonest. Realistically, it should be King of Fighters XIV Heroines: Tag Team Frenzy. The only character not from that particular game is Shermie, who doesn’t even get a fetish outfit to wear (Kukri ran out of ideas, I suppose). Even Nakoruru, Mui Mui and Love Heart, the only characters not native to KoF, were a team in the latest game. So already there’s a bit of a misfire, since we don’t actually get a variety of the titular heroines. I mean, come on, what about Cham Cham, Fio, Ai, or Hibiki? If you were willing to go deep enough for pachislot characters, one assumes you can aim for more. 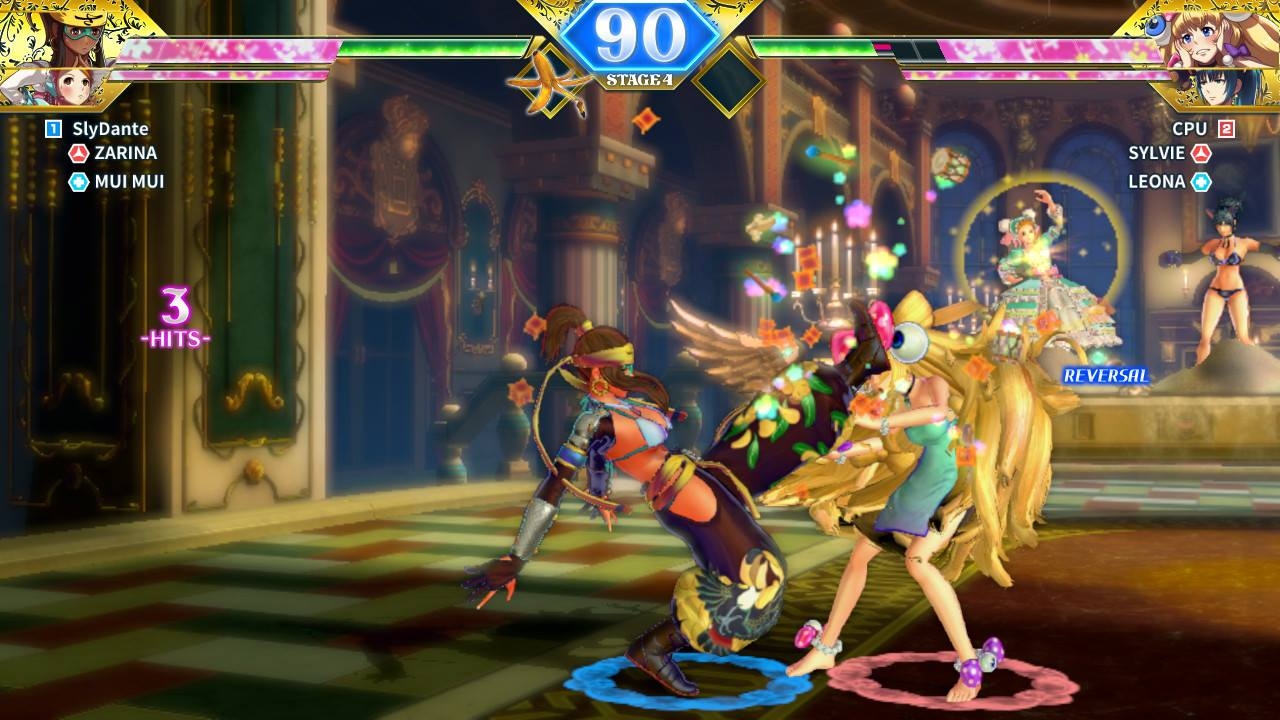 But how does the game actually play? Well, as the title tells you, SNK Heroines: Tag Team Frenzy has a large focus on tag team battles. You choose the main, additional fighter and secondary one, and you switch between them in combat with the touch of a button. Gmeplay this time around, however, takes a more Super Smash Bros.-styled approach to things. For one, you have capsules in the arena filled with various items that you can collect deploy in combat, like poison to chuck at enemies, statues to drop on people, pinballs to bounce around the screen, etc. The other twist is that merely depleting your opponent’s life bar doesn’t finish them. You need to get it into the red and deploy a special attack called a Dream Finish on team, executed with the touch of a button. To do this requires building up a Spirit Gauge, which depletes as you attack but charges otherwise, and charges faster for your partner on standby, encouraging you to swap at the right time.

Some may give the game flack over assigning special moves and blocking to single buttons or altering the win condition to something seemingly simpler. They may feel it gives off the air of pandering to “casual” gamers. But rest assured, none of this affects the gameplay in any way. Things are still nice and fast-paced, the characters have unique moves and the tag team system is nicely implemented. It may be a more different setup than one would expect from a typical SNK fighter, but it’s one that can work and still allows for quality skirmishes. That said, when you begin the game, immediately set the CPU difficulty to a higher setting, because the lack of any challenge in the computer opponents is mind-boggling. 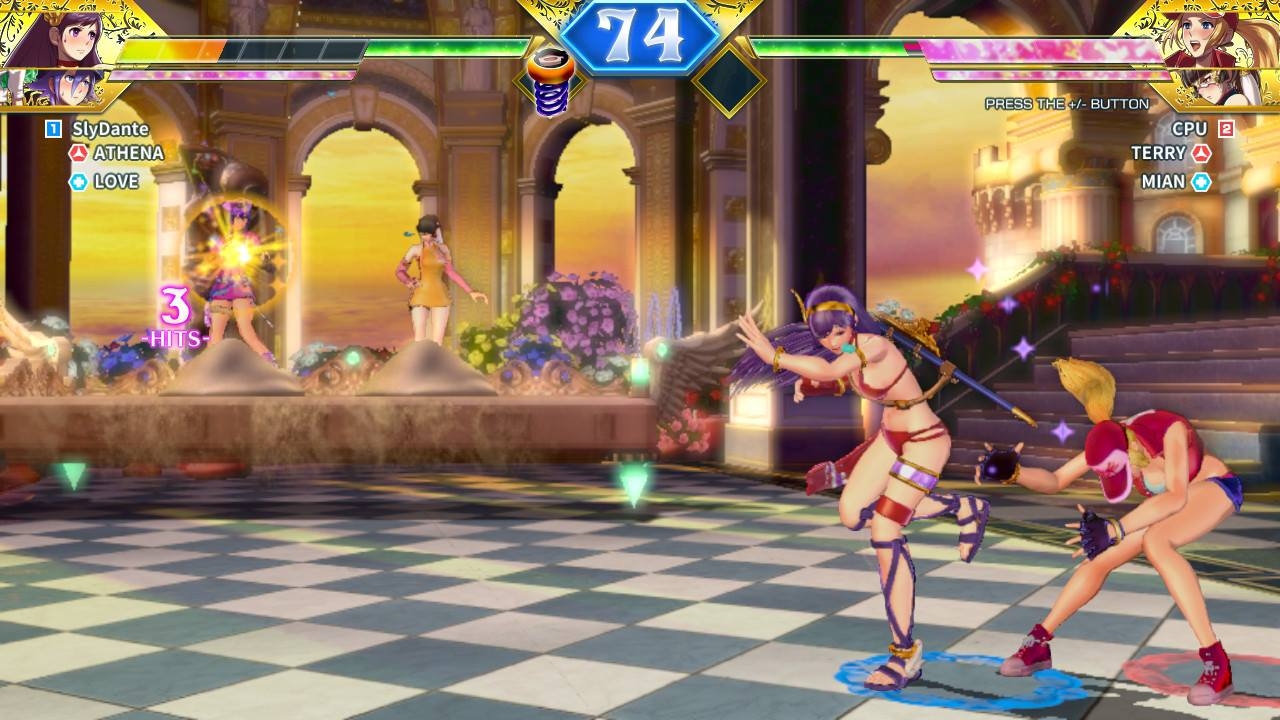 There’s making a game that’s accessible to all types of players and then there’s kind of insulting them by suggesting this should be the default difficulty. What exactly am I talking about? Opponents who won’t attack you (even for a good three or four seconds when in front of you), whole matches that can end in less than thirty seconds (not helped by the game not using the traditional three-round set-up, so one shot is all that’s needed), and as the cherry on top, CPU opponents rarely ever tag in their partners. In a game called SNK Heroines: Tag Team Frenzy. Heck, even going to the next notch up, some of these issues still linger in other modes. It’s honestly a bit mind-boggling.

I was actually ready to say without hyperbole that you could beat the entire Story mode in the time it takes to read this review, but then you get to Kukri, the final boss. And suddenly SNK Boss Syndrome kicks in as he’s able to suddenly effortlessly pull off a twelve-hit combo that drains you of all health and leave you defenseless for a Dream Finish that automatically ends things, in a severe difficulty spike. It makes one wonder what the point is in trying to appeal to a wider audience if you’re still going to deal with ultra-cheap endgames.

Then again, it’s not like beating Kukri actually matters, since you can just use currency earned to purchase the ending in the Gallery. Yep, the whole ending. And the individual endings for each character. Heck, one trip through the story mode earns you enough money to do so. So after that, one has to wonder what the point of the Story mode is if you never need to revisit it after one trip. And the only other two solo modes are standard one-one-one battles and a Survival mode, so it doesn’t take long to breeze to everything the game has to offer (a were seven backdrops to fight in doesn’t exactly help as well). 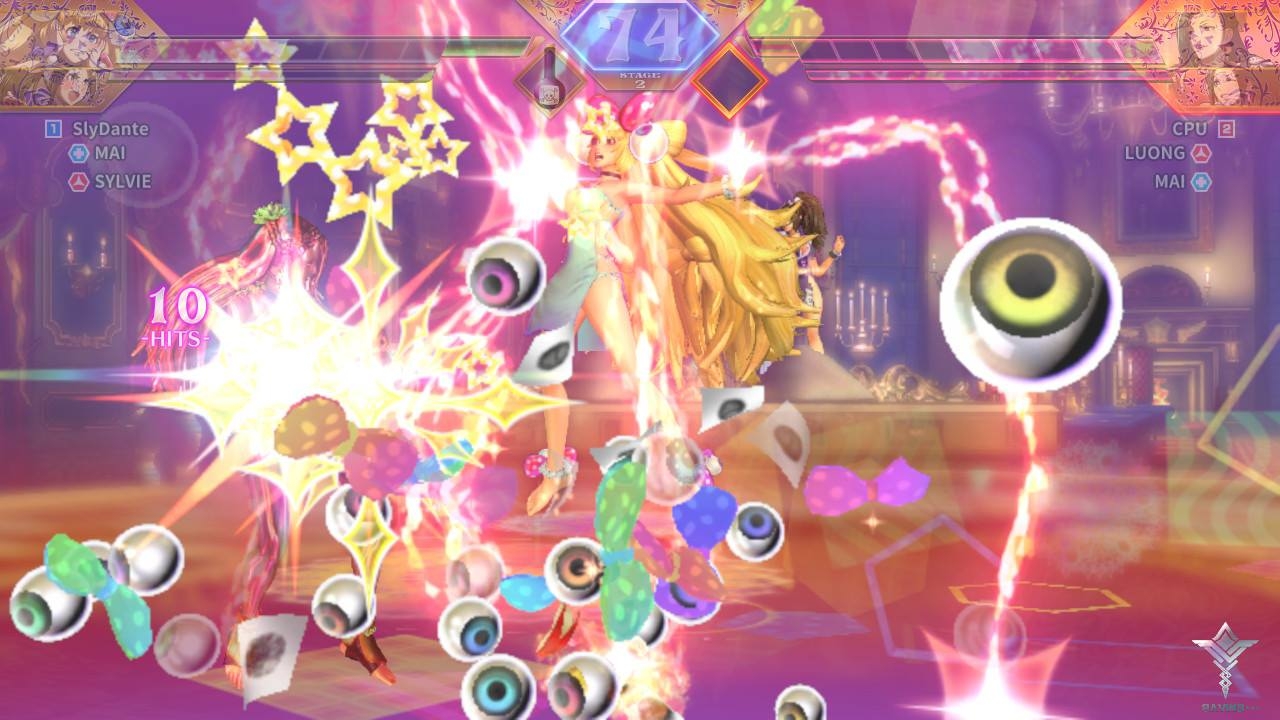 The fatal flaw of SNK Heroines is that it’s shallow. In about one hour, you’ll have experienced basically everything that the game has to offer, including using the Online mode to play a few matches (which do seem stronger then the game’s AI and are generally more fun). Again, the more accessible fighting gameplay is perfectly fine, but combined with everything else, it creates a lack of depth. It’s a shame, too, because the game still has plenty of charm to spare. The graphics are nice and colorful, the music is catchy, and attacks lead to little bursts of charms shooting out, in a cute and slightly humorous touch, among other things. But charm only goes so far here.

I would say that one of the only major reasons to buy the game is for the fanservice, but honestly, it falls short in that area as well. As mentioned earlier, SNK fans won’t find anything here that isn’t already in KOF XIV. And as for cheekiness and cheesecake, it pretty much boils down to nothing more than “see these ladies wear silly costumes,” despite what Kukri’s constant comments about fetishism and perverted mannerisms may suggest. You can use the in-game cash to buy new outfits and accessories with a hefty amount of customization, but it barely makes any difference in the actual game. SNK Heroines almost feels like it wants to venture into Senran Kagura territory with its setup and dress-up features, but while Senran Kagura games unashamedly go all in on their cartoonish perviness and over-the-top nature, SNK Heroines just feels like it’s holding back. Hell, I’m pretty sure the Senran Kagura games even legitimately put more effort into their plot as well. 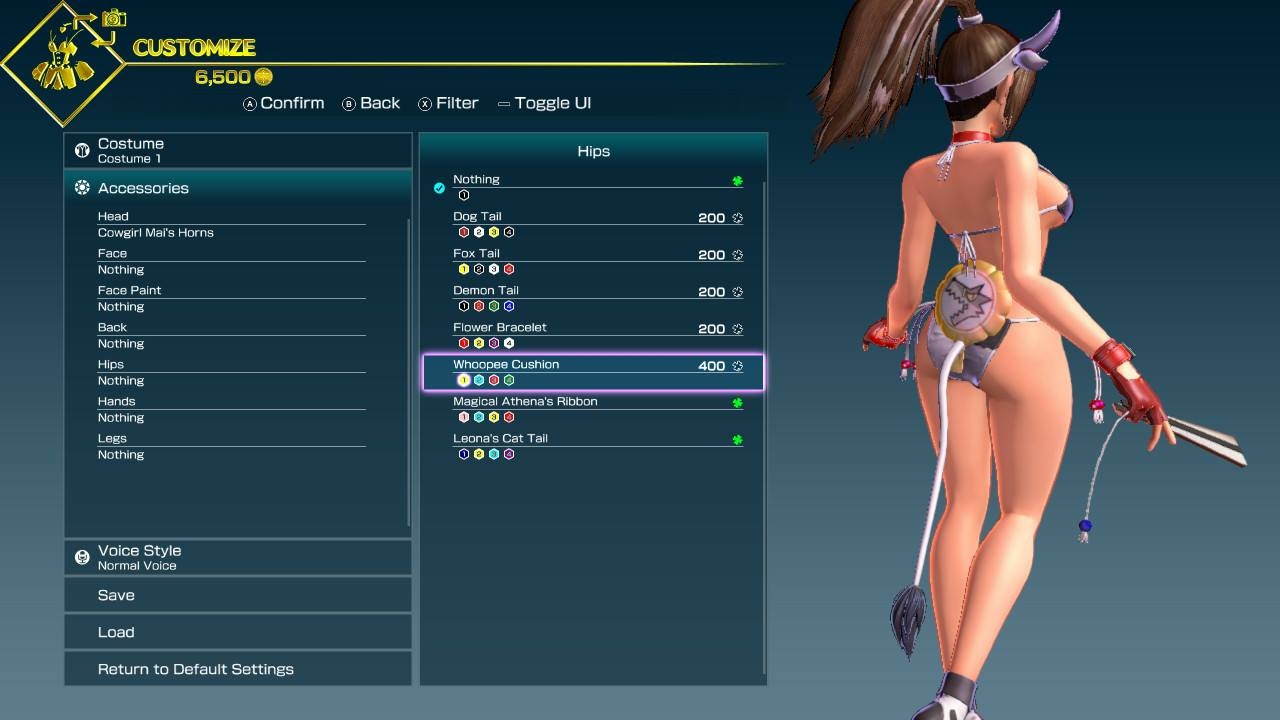 While SNK Heroines: Tag Team Frenzy has the potential to be a fun hunk of cheese and fanservice, ultimately it relies too much on the game’s premise to carry things. The core tag team gameplay isn’t anything bad – rather fun and unique, even – but extremely short matches, a lack of variety and uneven AI means that said gameplay never achieves its full potential. Only the most diehard SNK fans may want to pick this one up, and even then, odds are you’ve seen these femme fatales done better in both gameplay and sex appeal in previous fighters.