The Torchlight series began back in 2009, with the first entry only being a single-player experience. Torchlight II added the bonus experience of being multiplayer via online or LAN play. The latest entry, Torchlight Frontiers, takes things a whole step further by opening up the dungeon-crawling craze to allow tons of players at once in an MMO setting. Now players aren’t just going to go at it alone or with friends, but open up a whole new world of opportunities of people to play with while exploring through the world of Torchlight Frontiers.

Much like the Torchlight entries before it, Frontier takes with it the overhead approach with an emphasis on defeating enemies and taking their loot. Each playable character has their own set of normal and special attacks to take into battle against all manner of monsters. These moves aren’t restricted by a normal sort of mana that requires potions to refill, but instead slowly fills itself back up over time to allow for quicker-paced combat over all. Every fighter also heads out into battle with a trusty animal partner, who can be used to hold extra loot while out adventuring in order to take it back to town. There is a central town hub that is used for selling and buying items and is also one of the main places players will see others running around in the overworld. 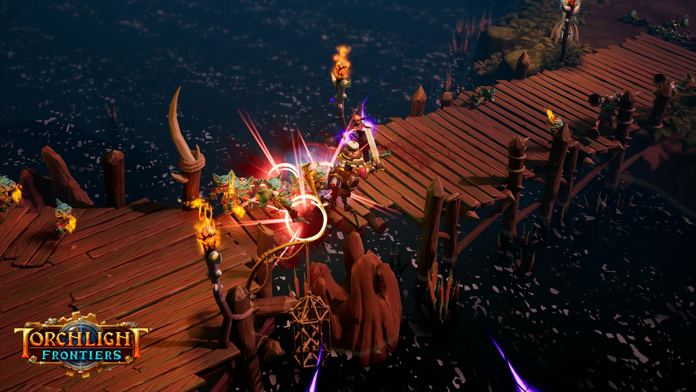 The biggest change to the formula with Torchlight Frontiers is making it an MMO. Players are no long alone in their journey to fight through dungeons and take on monsters, but will instead be surrounded by quite a few others as they also go about on their way. Outside of the cities, players will also run into one another while out fighting monsters and gathering items. This is where players can interrupt each other too, as resources in the overworld will disappear once they’ve been gathered and players will have to wait for them to respawn. Fortunately everything in the main overworld eventually comes back, so it just takes a little patience to get another chance at more items. Fortunately there is one place that players can go to get away from the crowds of people in the overworld and that’s the dungeons themselves.

When done killing and taking look outdoors, players can travel into their own dungeons away from the many other players to defeat on their own. Unlike the outer areas, these dungeons don’t have constantly respawning enemies and are only visible to the player or group who enters together. These are more in line with the more traditional Torchlight gameplay, offering a classic dungeon-crawling experience complete with a boss to take on once players defeat enough enemies and reach the end. After completing, players can repeat it once more but will have to wait a bit before entering that particular dungeon again. Once they’re back out in the open world, players can continue on their way to the next step and keep moving forward while gaining even more levels to be the strongest around. 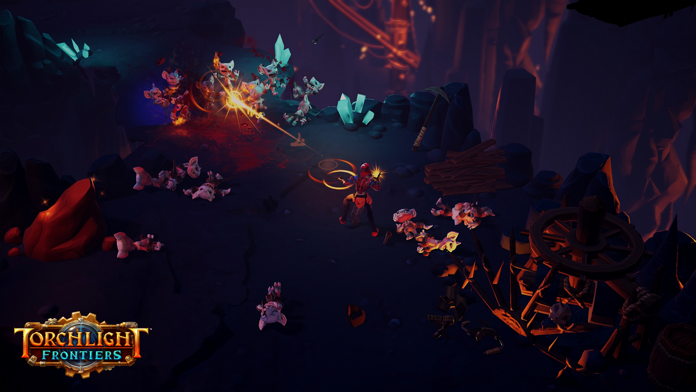 Torchlight feels as though it has been waiting for this upgrade into an MMO for quite a long time. The style of gameplay is welcoming and allows friends to easily drop in and drop out or just team up with complete strangers. The wonderful cartoon-like mix of realism and cel-shaded art style also fits the more upbeat atmosphere presented while playing and makes it a fun time whether in town, out exploring with strangers or finally diving into that next challenging dungeon. Those who want to go online with tons of other players can look forward to enjoying Torchlight Frontiers on PC first next year, with releases for PS4 and Xbox One coming sometime after.