In 2001 having M rated games on a Nintendo console wasn’t anything noteworthy, but for people who remembered the Mortal Kombat controversy over the blood or the many other less newsworthy instances of censorship that occurred in the localization process for Nintendo games, Conker’s Bad Fur Day as an N64 exclusive title was rather amusing. Conker’s Bad Fur Day did have an entertaining single player story mode and vast replay value thanks to the various multiplayer modes. Despite the cute appearance, this title earned its M rating, but also put the same amount of effort in showcasing how M for Mature can be a misnomer.

Conker’s Bad Fur Days begins as many of my days, needing to find my way back home to my rightfully irritated girlfriend after a night of binge drinking with friends. And the situation gets further complicated by events that I’m sure all of us can relate to. Conker was out getting drunk in the land ruled by the Panther King, who happens to have his own problems which include a table missing a leg. During the night of Conker’s shenanigans he must have done something to earn the ire of the Panther King’s advisor Professor Von Kriplespac, as he suggests using Conker as the leg replacement. Not fully comprehending or caring that bushy tailed rodents provide poor support for tables, the Panther King is all for this idea and the hunt for Conker begins.

Something none of us can relate to is during Conker’s stumble of shame back to (member) Berri he stumbles across some wads of cash. Squirrels aren’t exactly known for their laser focus when it comes to completing an important task and Conker is no exception to this. As he wanders off in the pursuit of the almighty dollar, he finds himself embarking on a ridiculous adventure. In all fairness, it’s probably safe to assume that most people would be distracted by various wads of cash while they are stumbling home when either hungover or still drunk. 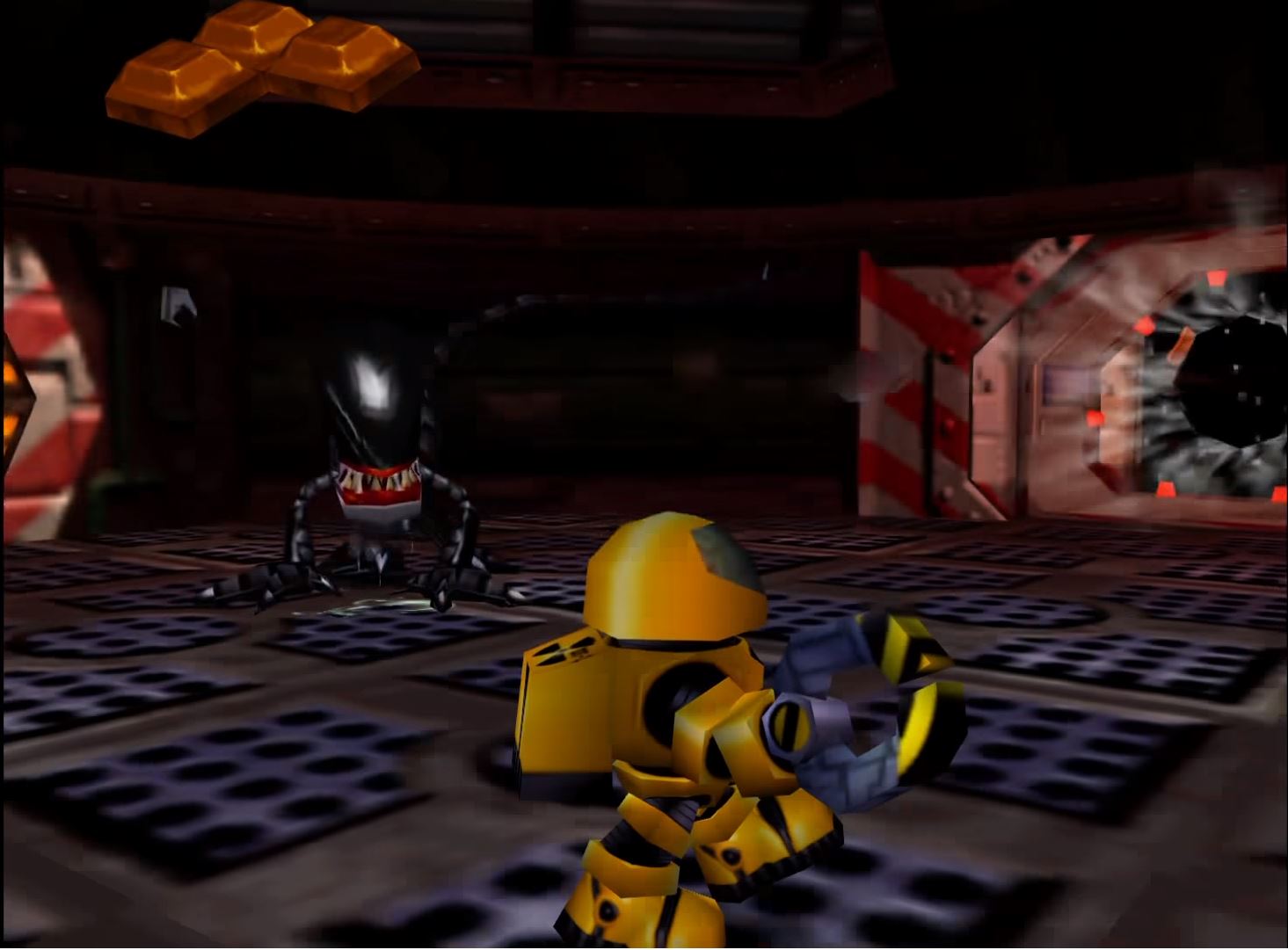 Conker’s Bad Fur Day was released to critical acclaim due to its technical achievements, solid platforming gameplay and off-the-wall mature humor where Conker occasionally breaks the fourth wall. The single player game has Conker traversing through various bizarre 3D levels that are found on an overworld map. Different parts of the map will unlock when Conker collects enough money to do so. The graphics were impressive for 2001 N64 standards with equally solid controls. This was one of the strangest games in the N64 library with a varied and creative cast of enemies for the poor red squirrel to overcome. But in a game that is over the top ridiculousness, memorable boss fights and overall weird humor, there is one boss battle that stands above all of them as being the most memorable, and that of course is in the Sloprano chapter.

No one can discuss Conker’s Bad Fur and not bring up the epic operatic battle with the Great Mighty Poo. The battle begins with the massive pile of excrement singing an aria that is quite likely the first operatic performance about flinging feces. Conker’s weapon of choice in this fight is toilet paper and this is one massive load that needs to be wiped off the face of the earth since he has to use quite a bit of toilet paper in order to overcome this adversary. Scatological humor, despite its high potential to be funny, is often looked down on as being juvenile, lazy and catering to the lowest common denominator. It’s nearly impossible to completely absolve a giant pile of poop, but even those with the most sanitized sense of humor have to give props to the creativity with making a heaping pile of excrement an opera singer and he’s actually got a good voice. Conker’s Bad Fur Day has many hilarious moments, bizarre events, good boss battles and is generally a great game, but this particular fight stands out as most memorable and is the single best moment to summarize what is the essence of Conker’s Bad Fur. 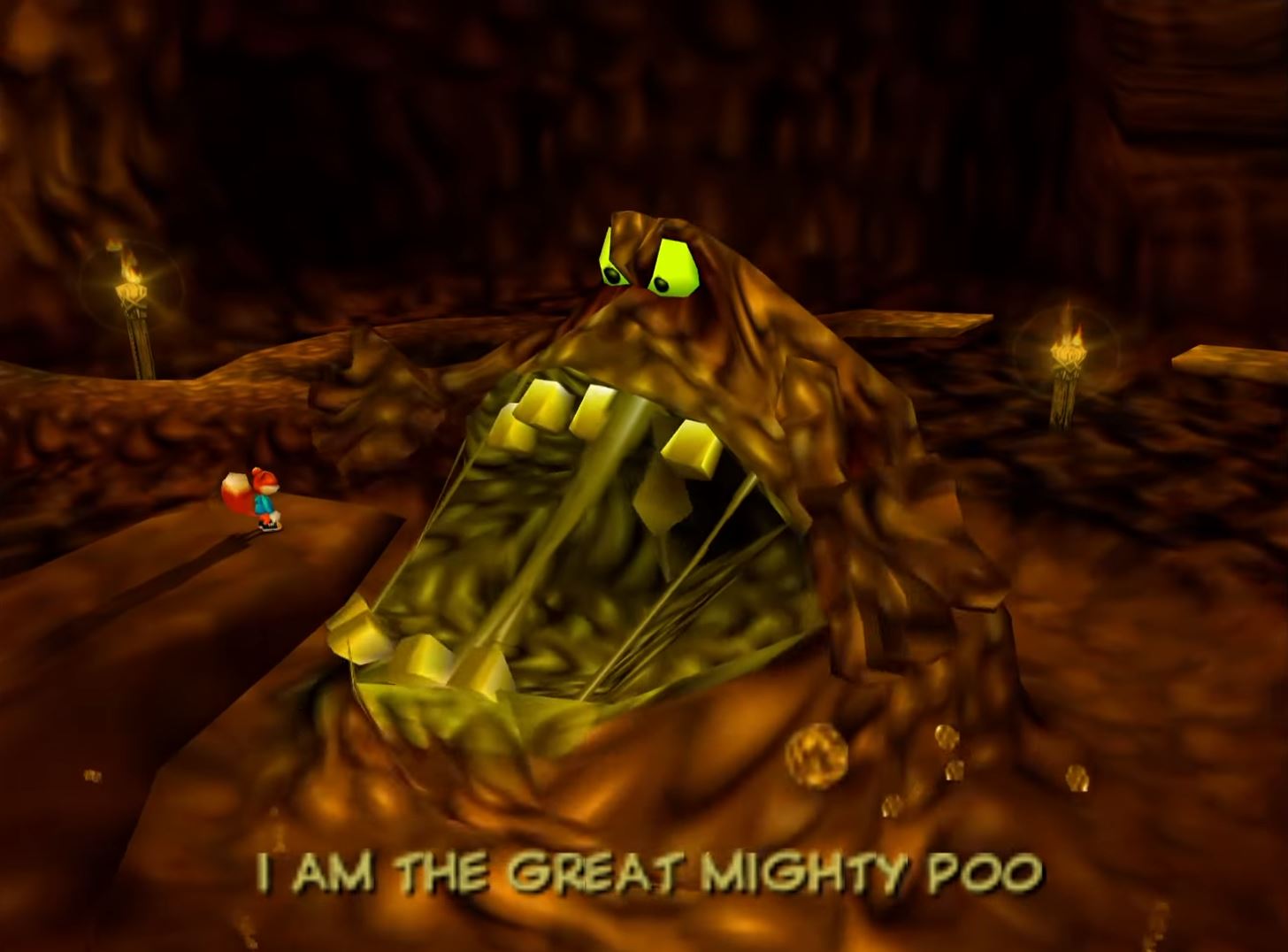 Movie parodies can be hit or miss, and Conker’s Bad Fur Day has quite a lot of these that end up in the hit category. Right off the bat the game begins in sequence ripped straight from A Clockwork Orange, complete with the accompaniment of The Funeral of Queen Mary. This wasn’t the only Kubrick reference as Full Metal Jacket and Eyes Wide Shut were also acknowledged in later parts of the game. There are dozens of references to movies that span decades throughout the game. Some of the more timely ones (relative to the game’s release) was the recreation of the opening sequence of Saving Private Ryan when Conker goes to war against the Tediz and The Matrix when Neo Conker selects his weapons during the heist. The best was when Conker dons the yellow mechanized suit and quotes one of Sigourney Weaver’s memorable lines from Aliens.

The single player campaign clocks in somewhere in the eight to ten hour range to complete but several different multiplayer modes tack even more play time. There are seven different modes in total, which are Beach, Deathmatch, Heist, Race, Raptor, Tank and War. Beach has a team of Tediz against a team of Squirrels where the Squirrels try to make it to an escape point and the Tediz try to kill them. Deathmatch requires no explanation, just Tediz and Squirrels trying to kill each other. Heist is where players control one of Weasles named after Reservoir Dogs characters and try to steal a bag of money from a bank vault that is not very well guarded. Race is pretty self explanatory. Raptor is a team of cavemen trying to steal eggs from a velociraptor to make in a king sized omelette. Conversely, players controlling the raptor are trying to feed the cavemen to their baby dinosaurs. Tank is a basic tank battle. War has a couple different modes, both involve the conflict between Squirrels and Tediz. This mode can either be a game of capture the flag or Total War, where the objective is to steal the enemy’s gas canister and unleash toxic gas, wiping out everyone. Most of the modes can have the parameters set to include a time limit, score limit and AI bots for either side with an adjustable AI where the dumbest setting is Inbred. 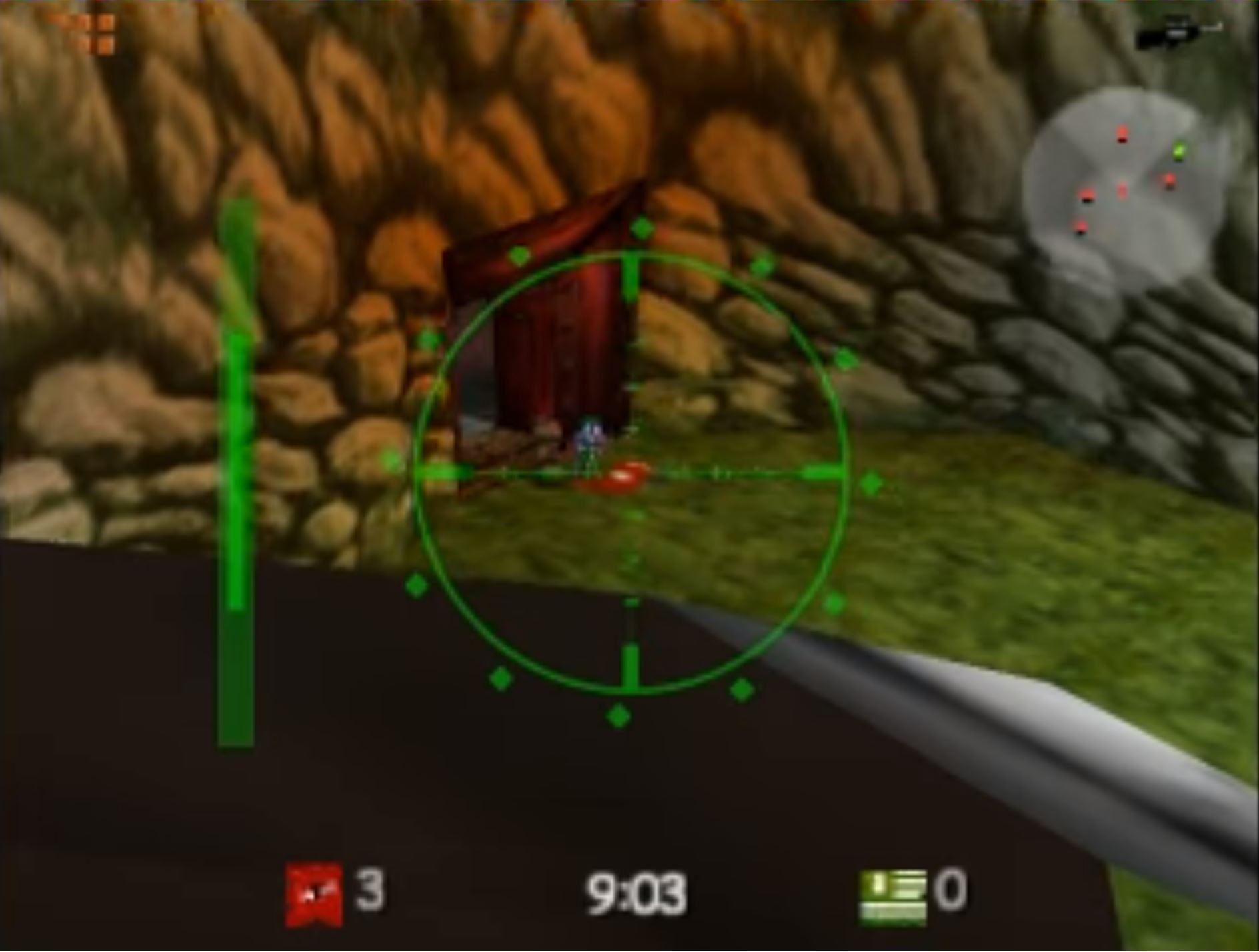 All of these modes are fun but the ones that we spent the most time on were Heist and War. The Reservoir Dogs style and music to the vault heist gave this mode a cool vibe and it was fun to see who would kill who in a fight between the oversized revolver or the baseball bat, though the throwing knives seemed to be the overall most useful weapon. War was fun playing with the different guns and trying to snag a katana since there is just something satisfying about decapitating someone shooting at you with a bazooka. The Tediz seemed to have their own language, and while deciphering what they were supposed to be saying was difficult, they seemed to use a word a lot that sounded like “stay bah you.” We cannot confirm or deny that we may have reworked a song by The Prentenders to “I’ll Staybahyou.”

Conker’s Bad Fur Day began its life as Conker’s Quest and later was renamed Twelve Tales: Conker 64. Initially this was intended to be a cutesy fun-for-the-whole-family type of game before something went horribly wrong and we got this highly offensive and hilariously violent title instead. In 2005 this title got a remake for the Xbox as Conker: Live and Reloaded. The Xbox version was a remake of the single player campaign but did undergo some censorship, which seemed weird for people that remember how Nintendo was in the ’80s and ’90s that a game was being censored when it is being ported from Nintendo. The multiplayer mode was completely revamped and changed, so people who wanted the same multiplayer options from the N64 version were in for a disappointment. The original N64 version is the overall better version of this title, and thankfully it can be played on the Xbox One as it was included in Rare Replay. The controversy surrounding the not kid friendly content of a game that looks designed for kids did help get this title a lot of attention back in 2001 but it’s rewarding gameplay and great sense of humor is what makes it worth remembering today.