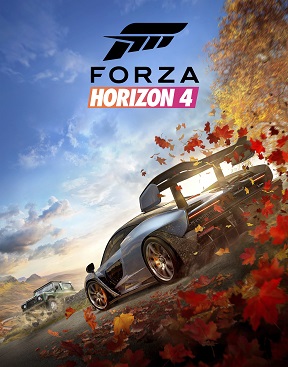 So far, Sony has dominated the first-party title conversation in 2018, with God of War and Spider-Man not only being critical and fan favorites, but commercial successes as well. While Nintendo has a promising few months ahead for exclusives, their first nine months have been steady but unremarkable, with their biggest seller, Kirby Star Allies, failing to garner two million sales as of July. Meanwhile, Microsoft has had a critically lackluster year, with Sea of Thieves and State of Decay 2 both having poor showings at launch, but maintaining dedicated fan bases that are eager to see their respective titles improve and succeed with post-launch content and updates. Although Forza has never been a series that has appealed to an exceptionally wide audience, its high level of quality has remained consistent throughout the generation, setting the bar for both on-track and open world racing titles over the past several years. 2016’s Forza Horizon 3 was undeniably a high point for the more recently-introduced spin-off series, introducing the biggest world yet and a brand-new online co-op adventure mode. Two years later, Forza Horizon 4 continues to refine the addictive open world racing genre with a bevy of on and off-road challenges, hundreds of vehicles with accurate handling and detailed designs, and a gorgeous depiction of Britain packed with collectibles that looks stunning in each of the game’s four seasons.

Of the many variables that fans may be concerned about prior to a new Forza releasing, Playground Games’ commitment to vehicles that not only look realistic, but feel realistic to drive, is probably not near the top of anyone’s list, but it bears mentioning for newcomers that have yet to experience this exhausting amount of dedication. While there was no realistic manner of checking out every one of the 450+ cars, each one we did see featured extensive interior and exterior detailing, as every vehicle can be driven in the cockpit or the classic third-person perspective. It might be a bit of a stretch to argue that every car feels unique, but they all respond fairly closely to what players should expect from each vehicle, reacting in a realistic manner to each road type, weather or season. On top of that, each car offers in-depth exterior customization, tuning, upgrades and their own skill tree, allowing for complete overhauls to turn even the simplest of cars into viable racing machines. Unfortunately, outside of the player’s own curiosity, there is little incentive to experiment with the vast majority of cars that the game throws at you at an alarmingly fast rate, when users can much easily rely upon a core, smaller group of cars that work for every race type and challenge.

The opening moments of Forza Horizon 4 does a fantastic job of setting the stage of what is to come for the dozens of hours that players can spend with the core game ahead. The main attraction of these first twenty minutes are the four seasons, each of which not only offer limited time events, but can offer some drastic changes to how vehicles interact with the world, as muddy off-road races in the spring can be revamped into snow-heavy slogs in the winter. From the different color palettes offered by the environments to the small changes that villages and the main city of Edinburgh undergo to adjust for the time of year, the addition of seasons is a sublimely implemented feature that brings a fresh sense of variety to a series that arguably didn’t need it, but still welcomes it. The expansive open world map is not only regularly enjoyable to traverse thanks to unique landmarks and numerous on-road challenges including speed traps and hidden billboards and barns, but offers a plethora of opportunities for excellent track design, from traditional road races and off-road dirt races, to late-night street races and mixed-environment cross-country races.

Forza Horizon 4 gradually introduces each of the first four seasons, allowing players to experiment with how each vehicle and race type is altered by these worldly changes before dropping them into the shared online worlds that host up to 72 people and rotate seasons on a weekly basis. In addition to the four race types mentioned previously, there are several story events that often serve as the high points of the player’s journey during the Horizon festival. From Showcase events that pit the player’s vehicle against alternate methods of transportation, to Stunts that feature Hollywood-worthy challenges, plus several late-game additions, these events are where Playground Games’ creativity truly comes shining through. Each race type includes its own leveling system, while the vast majority of events feature customizable difficulty sliders and can be played alone against Drivatars, against or with others online, or by facing Rivals in a new time-trial style mode, adding some increased replayability to the dozens of races available. While the checkpoints no longer require the same level of pixel-perfect precision that Forza Horizon 3 often seemed to need, the races still drastically vary in difficulty with little indication of the fact, which can prove frustrating in the early stages. 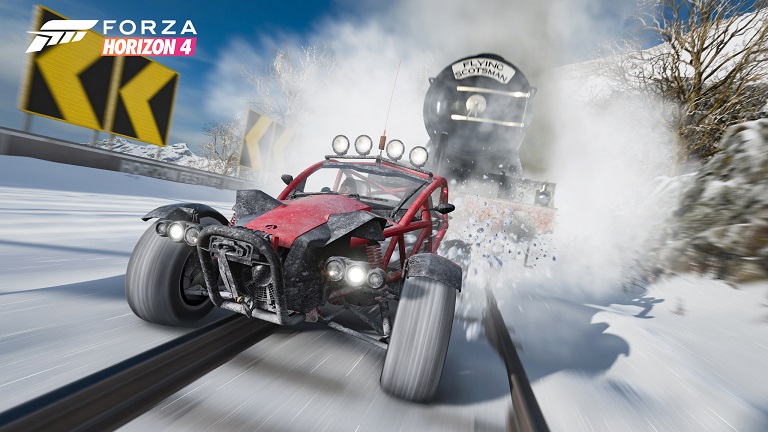 A greater sense of customization is present within Forza Horizon 4 as well, such as an enhanced blueprint editor that allows races to be created from scratch or based on current designs, and a designable player-character with a large closet of clothes and emotes to pick from. In addition to the return of the Adventure mode which allows players to explore and compete as a group, brand-new Forzathon challenges incentivize players to collectively complete on-road challenges including drifting sections and danger jumps, plus several multiplayer games such as Infected and Flag Rush are available that offer a welcome diversion from the onslaught of races. All of the multiplayer elements worked seamlessly with very few hitches, and often offered some of the most memorable moments during our time with Forza Horizon 4. As a result of these wide variety of activities, exploring the world for collectibles and participating in multiplayer events can often prove just as fruitful for gaining influence and Wheelspins as simply doing races.

On Xbox One X, Forza Horizon 4 is constantly jaw-dropping, as the dedication to color variety and minute details that remain present even at breakneck speeds combine to offer one of the best-looking and smoothest games on any platform. From dirt or snow gathering up on the rims of a player’s car after an intense race, or rubble and tree branches scattering across the road during minor collisions, every aspect of this fictional Britain reacts seamlessly no matter how much chaos is being caused by Drivatars or other players. The loud, bombastic music only further fuels the sense of adrenaline caused by these high-octane races, with a variety of modern popular and indie tunes being offered by the in-game radio. The presentation is not without its flaws, as some minor pop-in is visible on occasion, and the loading times can be extensive even on the higher-end platform, but these elements rarely interfere with the overall enjoyability of Forza Horizon 4.

Forza Horizon 4 is an outstanding evolution of not only the Forza franchise, but the open world racing genre as a whole. Bolstered by an in-depth and varied roster of vehicles and race types, seamlessly executed multiplayer, a stunning world to explore that is altered by truly game-changing seasons, hundreds of on-road challenges and collectibles, and a nearly endless amount of customization for races, cars, characters and more, Forza Horizon 4 proves that Playground Games still has plenty left in the tank for their racing series. A few minor technical issues and unclear race difficulties hold the game back from reaching its full potential, but Forza Horizon 4 still offers plenty of reasons to sink hours and hours into its open world for the months and seasons ahead for racing fans and casual gamers alike.