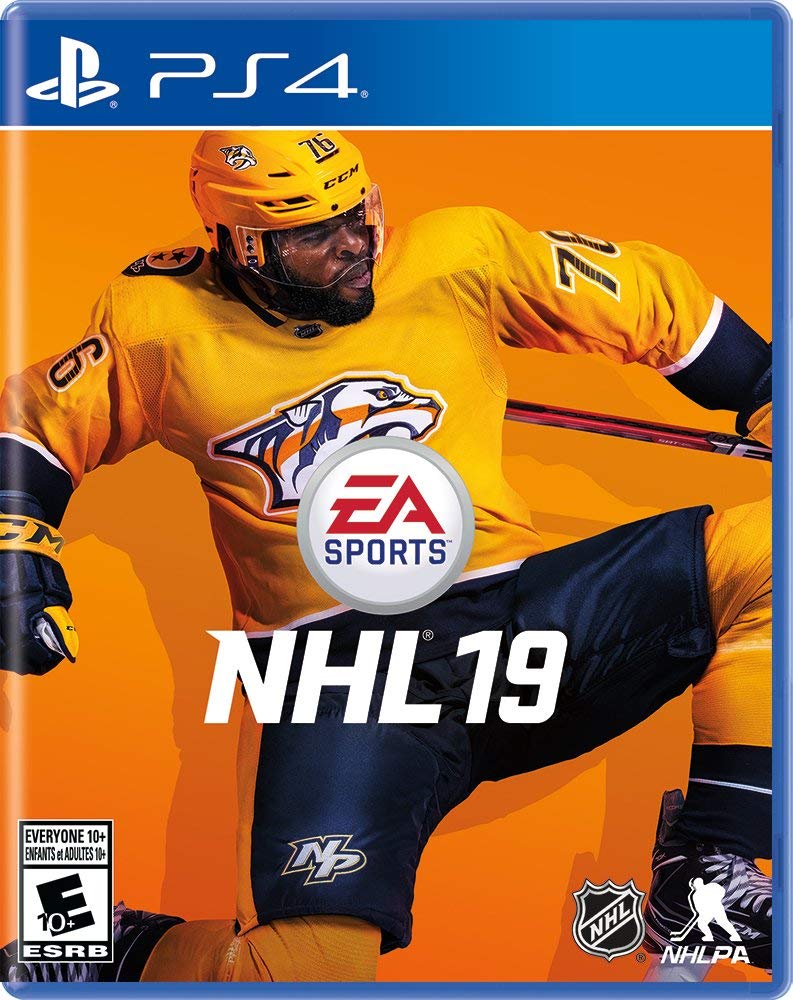 The sport of hockey at the professional level is evolving. The sports is much more focused on speed and is the fastest that fans have ever seen. EA Vancouver is looking to replicate that with NHL 19 as the team introduces Real Player Motion Technology that helps put a focus on speed and collisions. The team is also introducing a new mode called CHEL, which puts the focus on individuality. Much like The One in the NBA Live series, the CHEL allows you to play with and against other players to unlock more garb and define the type of player you are. NHL 19 takes a major portion of the series in a new direction and is ultimately the most fun I’ve had with a hockey game in years.

The CHEL is a unified progression system that keeps you coming back for more. The NHL Pro-am is a list of challenges as you will take on various squads and get a score after each game. This is the single player portion of CHEL and plays more like the normal hockey game does. NHL THREES returns in its best iteration yet. Over-the-top and fast arcade hockey action in a 3-on-3 format benefits from the RPM Tech this year. The main issue with NHL THREES is that the action moves so fast that there’s no indicators for player identification. The puck tends to get lost as well. Besides the color indicators that seem to change in every game, by the time you get a feel for it, the game is over. EASHL also returns in either 3-on-3 or 6-on-6 format as it is much more linear this year. In any of these modes, if you do not have enough players to fill the roster, it’s replaced with AI. The last mode, NHL ONES, is a timed pick-up game of hockey that is 1v1v1. NHL ONES is grindy yet addictive as the mode is a test of attrition to get the puck in the net. It’s played on half a rink and is a complete free-for-all that is fun and rewarding. With NHL ONES, the team wanted to capture the root of hockey by playing on ponds. The game features outdoor arenas that feel akin to a ski lodge. Even the PA announcer randomly comments on other games going on and he feels like he’s pulled straight from an ’80s movie. This adds to the fun atmosphere created this year. NHL THREES takes places in a modified arena complete with pyros as it helps intensify the action on the ice.

While CHEL is a unified progression system much like NBA Live has, the progression is much different. You have a handful of available slots to help build a specific type of player for different positions. Whether you want to be a Two-Way Forward, Playmaker, Enforcer or Goalie. Different badges change specific skill ratings for each position. You don’t start and grind your level up, but rather your player is given set ratings that can be varied to complete a position. NHL 19 also includes over 900 customization options that are catered to pond hockey such as hoodies, beanies, parkas and much more. This includes NHL-licensed apparel as players can set home and away uniforms. More slots for uniform designs are desired, however, as NBA Live 19 included multiple home and away slots to customize outfits. 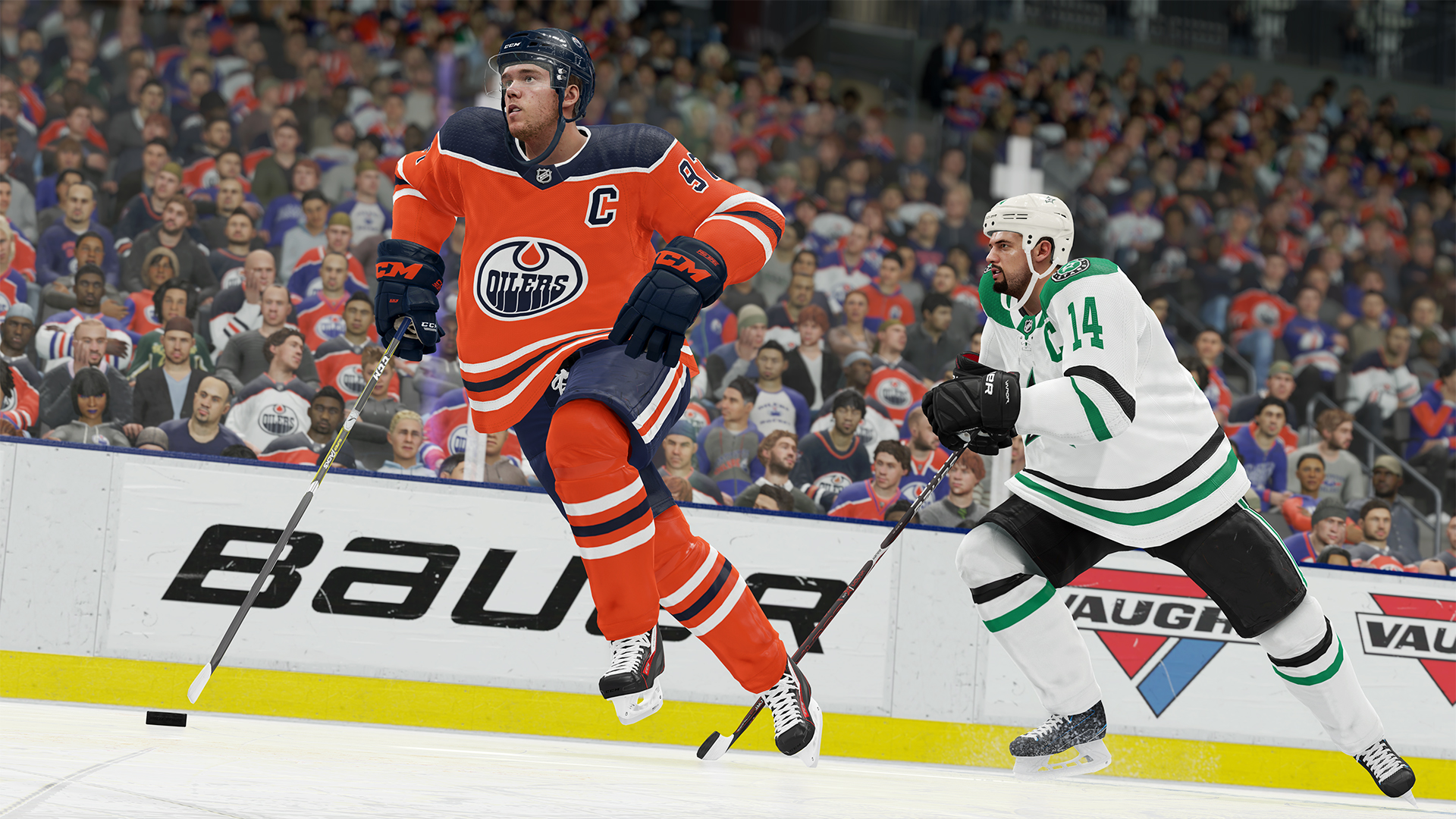 Real Player Motion Technology was introduced across the board this year for EA Sports games. It’s  safe to say that NHL 19 benefited the most from this. The gameplay is much more fluid, consistent and fast. Combining with a new collision engine that is momentum based, this ends up being the most enjoyable game of hockey in some time. There is a gameplay slider that goes between full arcade and full simulation and I recommend playing on the stock options. Cranking up to full simulation slows the game down and puck consistency becomes a problem as it bounces off of everything. Checks also don’t register as much, but collisions are much more consistent and rewarding playing on the default settings. The hits are momentum based and some don’t register at low speeds. Big hits are gorgeous as different hits land a proper response. Players will also go up and over goalies, as well. There are still some legacy issues with penalties as the only that seem to get called are tripping and boarding. Poke checking almost instantaneously gives a tripping penalty as a stick lift does the same for hooking. Some of these hits are done with elbows flying, but no penalty is called for elbowing. You need to choose your poke check carefully.

Besides the speed and the collisions, the control is much more tighter. While momentum is used to counter a change of direction, it no longer feels sluggish, but instead crisp and responsive. Players can cut and weave through traffic and dekes can be a thing a beauty. Players can also pull off a spin move. This also allows for better angles on defense. Even on full simulation, these improvements can be felt. The AI is possibly the best the series has ever seen. Teammates are responsive in reacting to the puck to the puck and fight to get into position. There are a lot less missed passes. Seeing your teammates lay out someone is appreciative. Even more so is seeing a teammate or opponent teammate retaliate and initiate a fight. It just helps complete the overall experience in the game. No longer do you feel cheated if the AI scores on you. 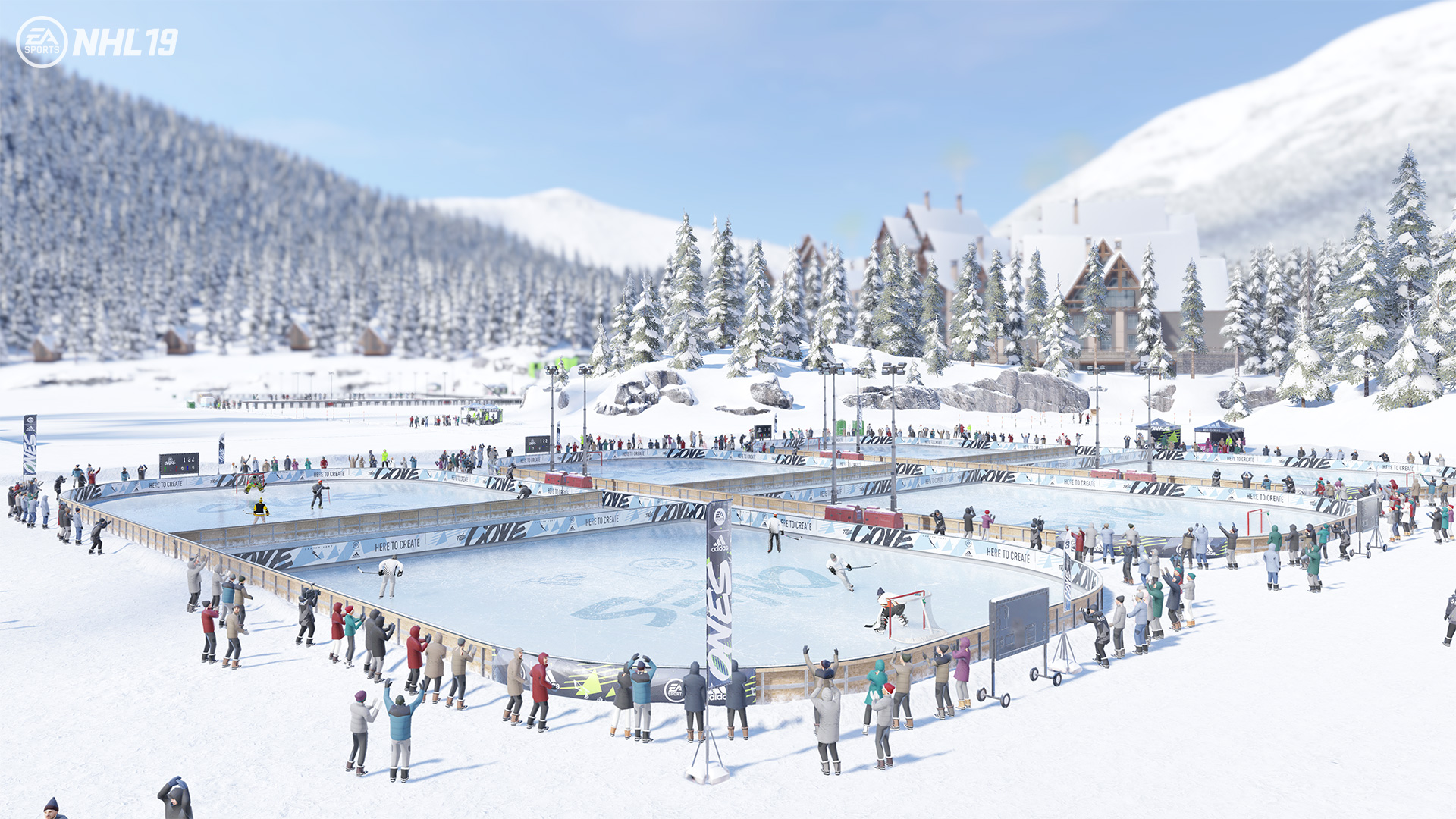 This series has always looked excellent visually and this carries over this year. The arenas and crowds come to life and the player models still look great. Having said that, there are a few things that could use an upgrade. The game doesn’t support HDR and that could truly add some visual fidelity to the franchise. Some uniforms do not look as good as others and playing in the daylight at an outside rink doesn’t feel natural. What desperately needs an overhaul is the presentation. This is one of the few sports games that includes an actual sports network television presentation and it still remains the minimum. The introductions remain the same and a bit more NHL on NBC is desired.

Mike Emrick, Ed Olczyk and Ray Ferraro return with the same commentary from four years ago. While other EA Sports games add dialogue throughout the season, the NHL series is committed to what it has. The commentary doesn’t sound terrible as Mike Emrick is truly the voice of hockey, but there desperately needs to be some improvement on this. Lack of storylines for teams or games and just offering the bare minimum isn’t cutting it anymore. In terms of other audio qualities in the game, the crowd is still loud and reactive. Hits also leave a satisfying sound and the other on-ice effects are perfect. Maybe one day the team will add on-ice chatter as a lot of that goes on during actual hockey games. 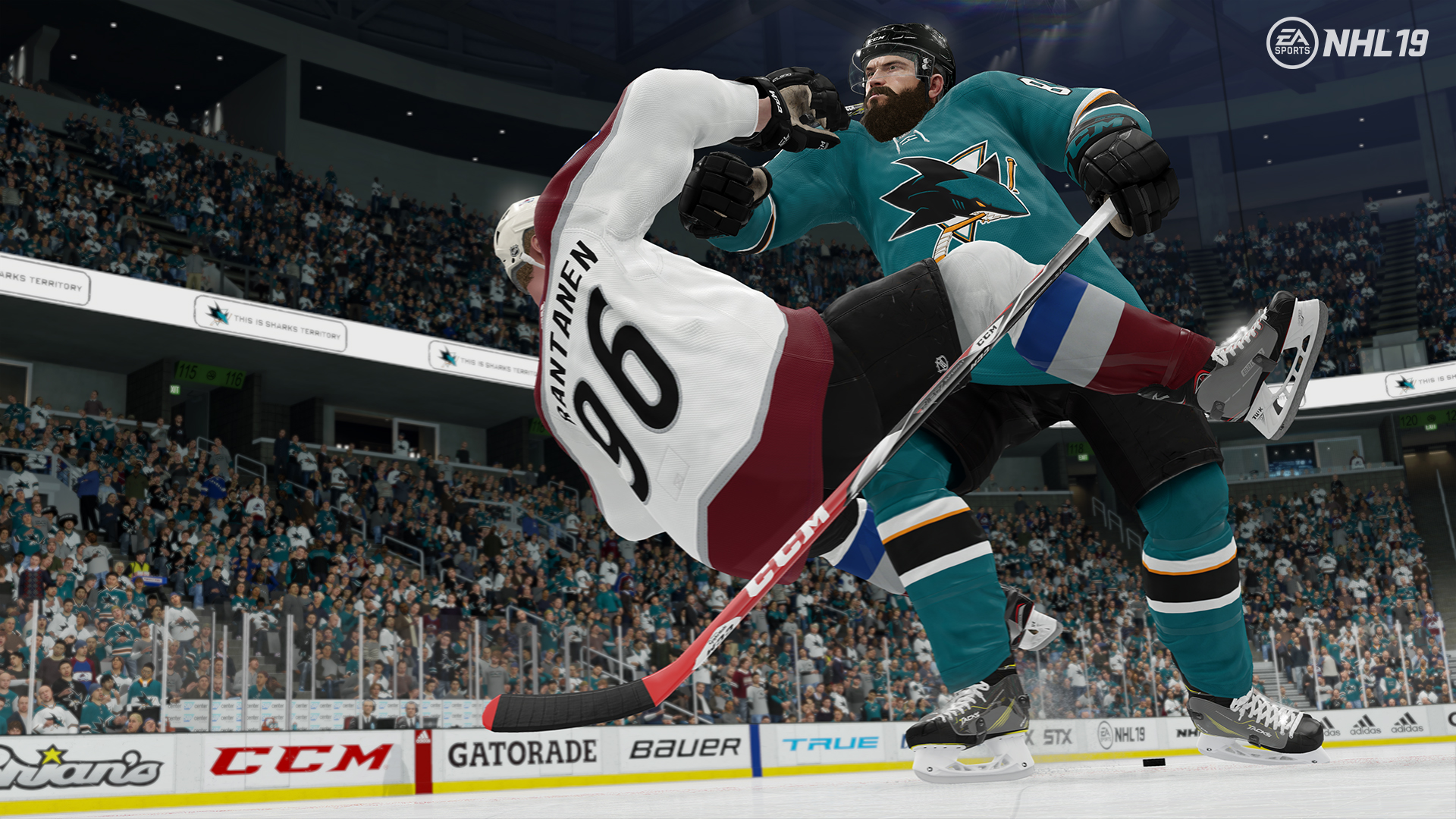 NHL 19 has introduced 200 legends to the game. Unfortunately, to experience the legends means jumping into Ultimate Team. The legends should really have been integrated into other modes besides playing an Exhibition Game with all-legends team. Being able to include them in Season or Franchise would be a nice addition. Mixed with the NHL 94 control scheme, it’s possible to play a modern version of that game now as players like Lemieux, Gretzky, Forsberg and Sakic are in the game. Player Loans are allowed in Ultimate Team to test out some guys, but ultimately it’s grinding for cards.

As EA continues to turn towards unified progression gameplay and narrative modes, Franchise Mode gets left behind. Last year, with possibly the greatest addition to a Franchise Mode with the Expansion Draft, NHL 19 mostly leaves it untouched. The Expansion Draft returns, but there isn’t any new innovations for it. A new scouting system has been added to Franchise this year, but it feels tacked on. Players can scout individual teams or players across multiple leagues and while that seems deep, there’s no direction in scouting provided. It doesn’t offer too much in terms of results and you have to know what you’re looking for when attempting to scout. 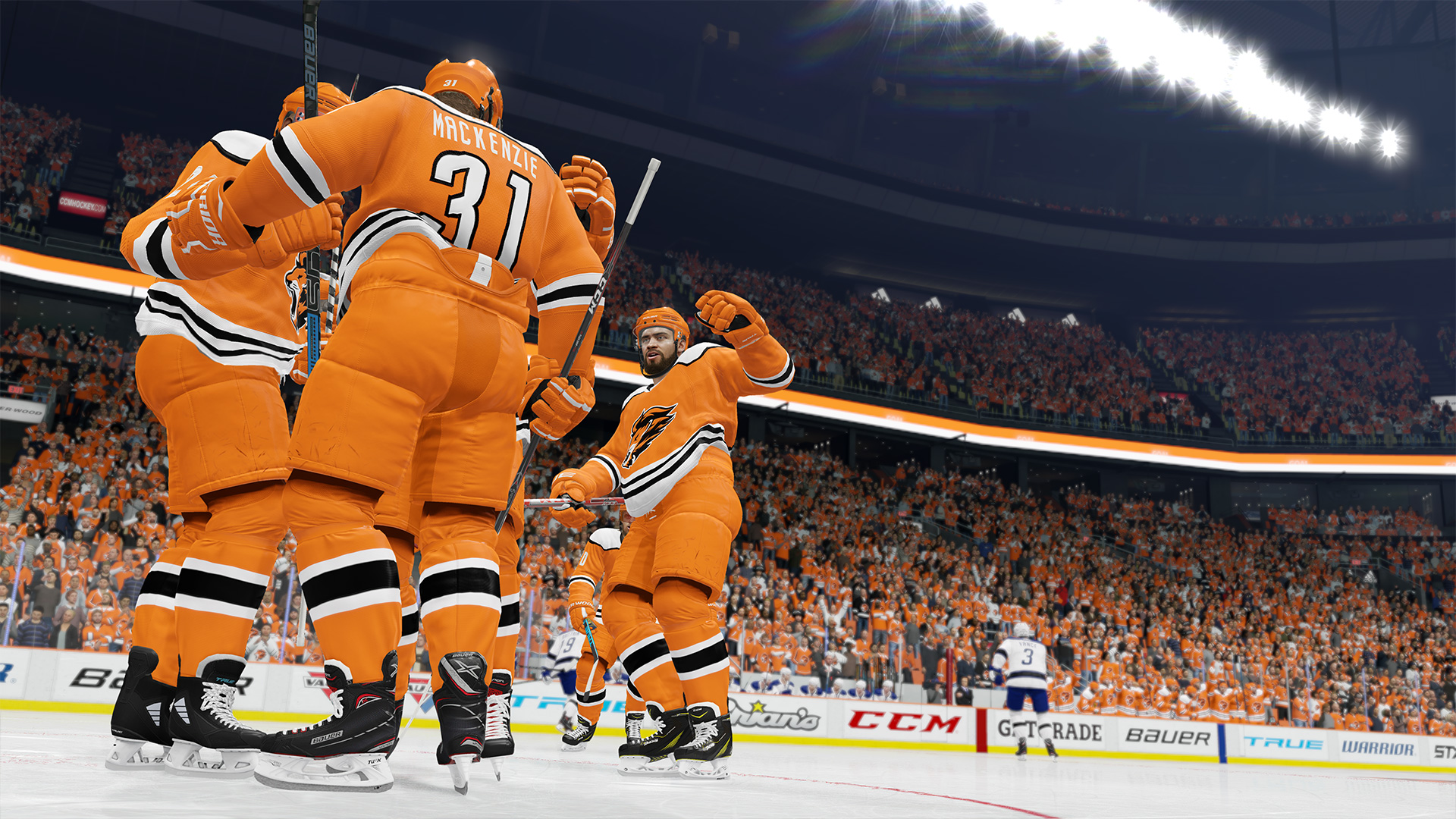 Besides some of the same nagging issues with the franchise, the portions that got upgraded truly shine. RPM Technology is no joke as the results are seen on the ice. Gameplay is fast and fun and the AI helps complete the experience. CEHL is extremely fun with a good bit of variety, but could use some more depth when compared to The ONE in NBA Live 19. The unified progression system that is here is quick and allows styles to be easily adjusted. Having 200 NHL Legends is fantastic if they were included in other ways outside of Ultimate Team. All the nitpicking gets thrown out the window once you hop on the ice, though, as NHL 19 is fun and exciting in action.