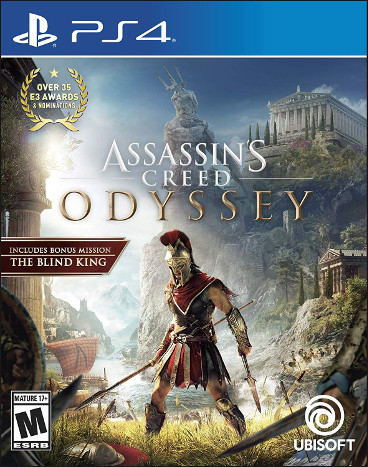 Assassin’s Creed has only been around slightly more than an a decade and in that time has generated over twenty games. In response to the series growing stale due to market over saturation, the developers took a break from releasing new titles in the mainline series to revitalize the franchise with last year’s Assassin’s Creed Origins. While the 2017 title was not without issues, our reception was favorable as it brought some changes to the franchise and gave it the shot in the arm it needed. Assassin’s Creed Odyssey is the follow up to Bayek’s adventure and in many ways feels like the next evolutionary step in the Origins template.

Players will have the choice of playing a male or female character, respectively Alexios or Kassandra. The only difference between the two options are their appearance and voice actor; in all other regards they are the same character. In cutscenes where both characters are present, the roles of Alexios and Kassandra will be assigned based on who the player is controlling. All romance options will remain open to both characters, so Kassandra and Alexios will be able to have a sampling of members of both genders for romantic partners. In the review playthrough, Kassandra enjoyed the pleasures of the flesh with two female and one male partners, though many more options were available. The story’s progression is the same for both characters, so players can freely choose what character they want to play without having to worry about how it may effect the game’s progress. This reviewer played as Kassandra, so that is the name that will be referenced in this review.

The setting of Odyssey predates Origins, taking place during the Peloponnesian War in the year 431 BCE. The story begins on the island of Kephallonia, when Kassandra has a nasty run in with some debt collecting thugs thanks to the financial irresponsibility of  Markos. Kephallonia basically serves as a tutorial island where we learn about Kassandra’s dysfunctional family and how she got involved with the charismatic dimwit Markos. It’s a place to spend a couple hours to become acclimated with the combat system, dialogue trees, learning the current state of things in the world until she is able to get her hands on a boat and have things open up to her. Despite Alexios and Kassandra’s storyline being interchangeable, the story is one of this title’s strong points with three major intertwined story arcs. The main story arc begins with establishing the chosen character’s own odyssey as they venture through the game, with the latter arcs opening up at later points in the game, one of them relatively early on and the other near the end game. 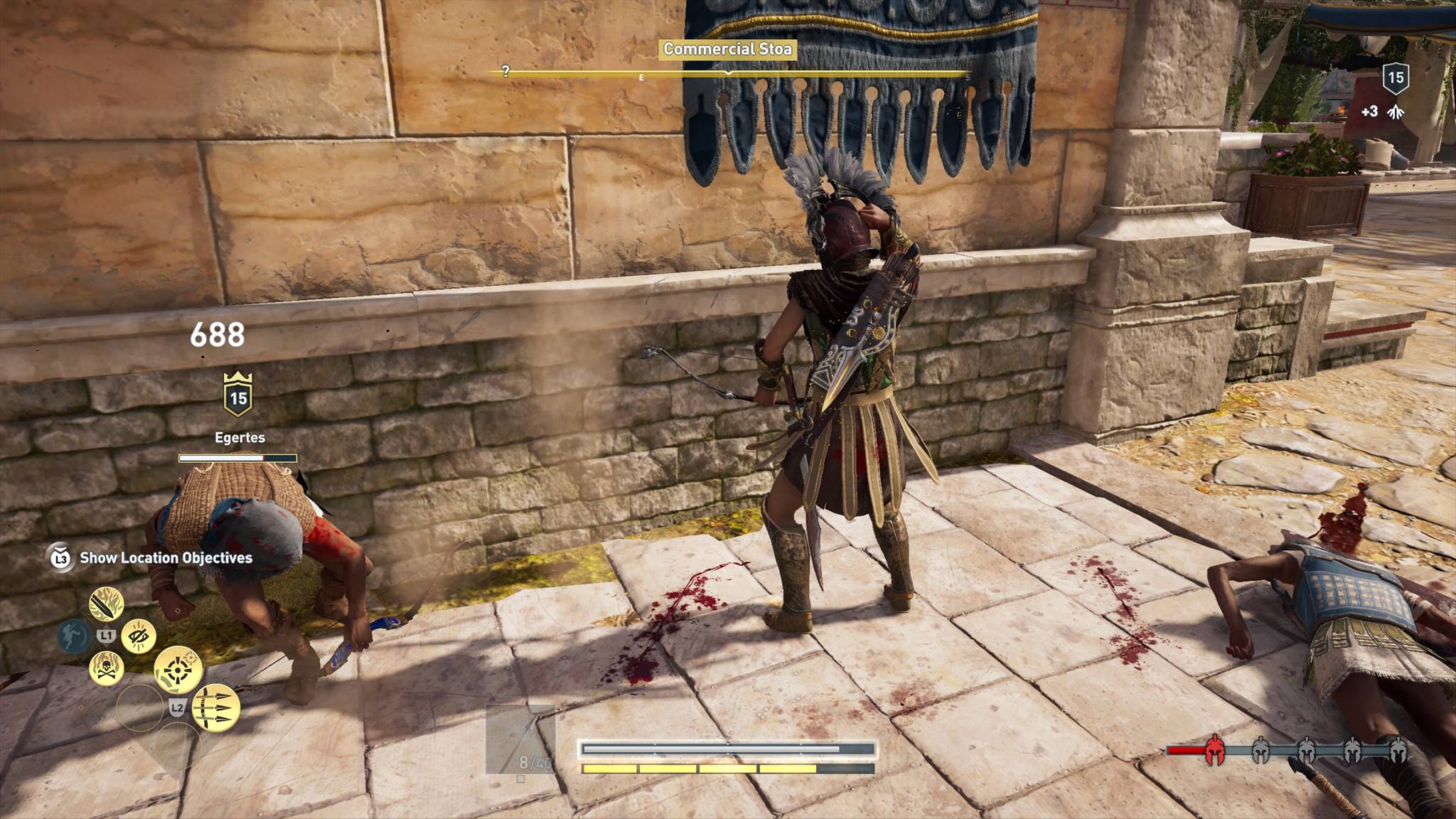 Much like Origins, the world of Odyssey is immense with no shortage of quests to take on. In theory all of Greece is open for exploration, but each region is designated a range of recommended levels. The way the game scales combat damage to levels is anything that is more than two levels above the player is virtually unbeatable except to the most skilled and patient players. This is the same system that was in place with Origins, but they did adjust how level relates to quests in Odyssey. Most of the main quests will scale to the player’s level, assuming the player is at least in the appropriate level range for a particular region. This lessens the need for the players to have to take on numerous side quests to gain levels if they simply want to progress through the main story quests.

In addition to the main story quests, there’s no shortage of activities in Odyssey. There are a ridiculous amount of side quests offered by the citizens of Greece, most of which aren’t too time consuming and usually deal with having to kill someone or retrieve or deliver some item. People who enjoy being double agents are in luck since there are opportunities to take on quests against both the Sparta and Athenian forces. Some of these can be rather amusing, such as one that is activated by playing god or the one that puts the tale of Oedipus on its side. Players can also track rival mercenaries, explore tombs or identify and hunt members of a nefarious cult. Just focusing on the main storyline is a hefty time commitment on its own and completionists will spend several dozen hours that could total into the triple digits. 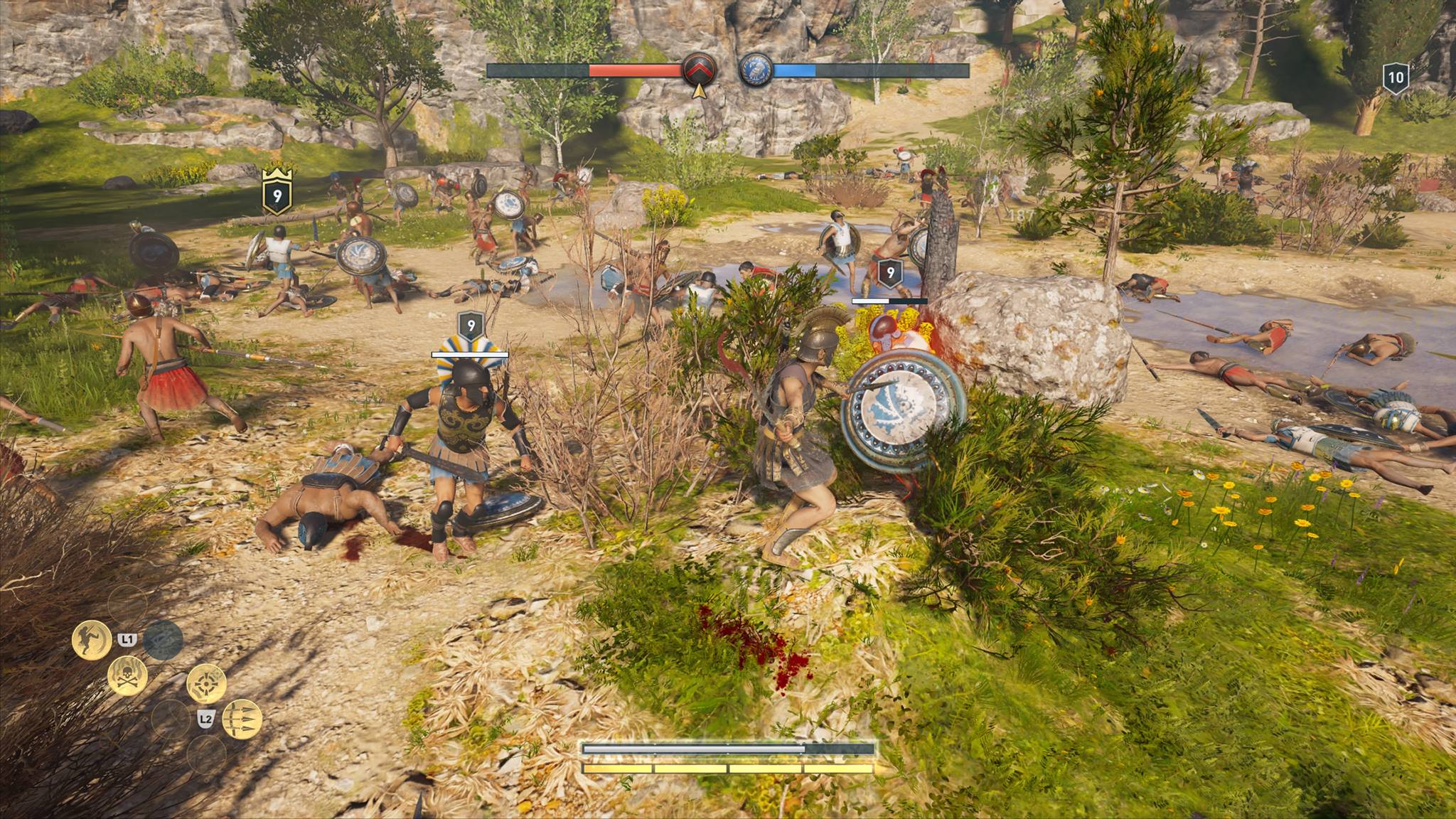 Sea travel plays a significant role in Odyssey and keeping one’s ship up to task is an important part of Kassandra’s responsibilities. Ship management is rather straightforward, expending resources and drachmae can be used to increase the ship’s defense and offensive capabilities. Throughout her travels Kassandra is able to recruit people, either through friendly or violent means, to serve as lieutenants on her ship. Navigating the seas can be dangerous, but the mechanics for naval warfare are responsive. A nice touch is when the player sinks an enemy ship blood fills the water and sharks swarm the enemy crew as they tread water.

Odyssey uses the same combat mechanics as Origins which is more akin to an action game than earlier Assassin’s Creed titles. Combat controls feel fine for the most part but could have benefited from more refining. Kassandra does not always dance about the battlefield with the grace one would expect from an assassin and it’s easy to get turned where a Spartan kick is directed at no one. The camera can be your worst enemy in battle, where a player’s skillful use of attacking and parrying against multiple opponents falls apart when the camera decides to zoom in on the foliage of a foreground tree or the wall of an empty hut. Many enemies have been blessed with damage impervious skin, meaning that they can be stuck full of enough flaming arrows to look like a porcupine and will remain unrelenting in their assault. Throughout the game Conquest Battles become available, which are used to help Sparta or Athens defend or conquer different territories. These battles are straight combat with no real stealth implementations with the objection being to take out the commanding officers until your side reigns victorious. These skirmishes can be enjoyable but feel a little out of place in an Assassin’s Creed game and seem like a For Honor inspired minigame. 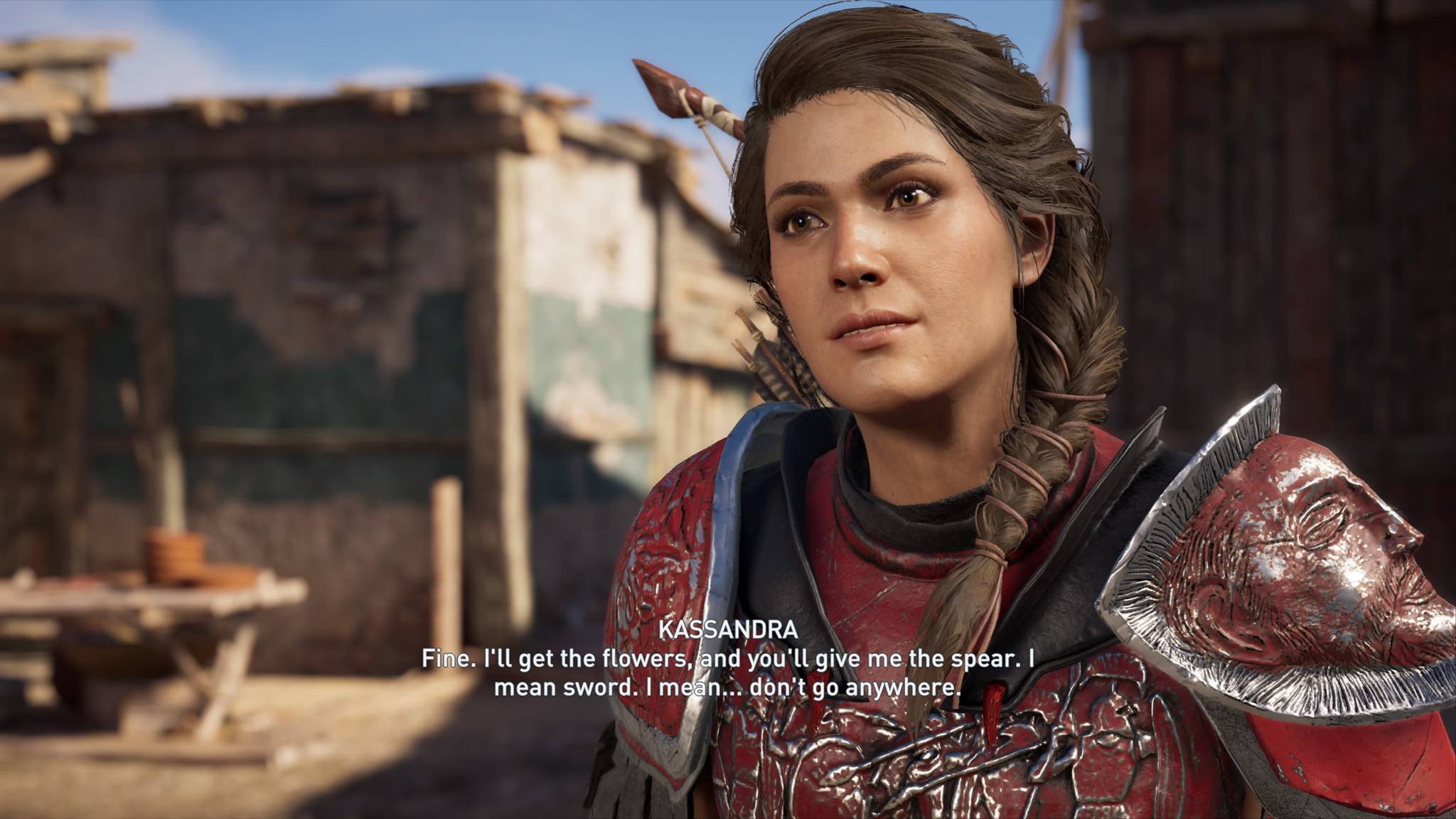 When Kassandra gains a level she will gain an increase in her health, damage output and a skill point that can be used to power up an ability in Hunter, Warrior or Assassin category. Skill points can be awarded through other means as well, such as completing a tomb. Weapons and armor also have their own levels and the player needs to be at the same level of the equipment in order to equip it. If the player finds a particularly good piece of equipment they don’t want to part but it reaches a point of obsolescence due to the player’s level vastly exceeding the equipment level the player can pay a blacksmith to upgrade the item, making the stats more appropriate to their current state. As the player levels, they will learn new engravings that will also customize their equipment and make it more useful.

Player choice and increasing the role playing aspect was a major focal point of Assassin’s Creed Odyssey. Players have dialogue trees that can influence how the world changes throughout the game. Players will be put in situations where they can show deadly force or mercy, or react aggressively or calmly to an NPC who is getting mouthy. Because of this there are several different possible endings in Assassin’s Creed Odyssey. There are several romantic options throughout the game, though these tend to be more along the lines of some flirting that leads to hooking up and not drawn out relationship simulations that don’t come to fruition until near the end of the game, a la the Bioware approach. 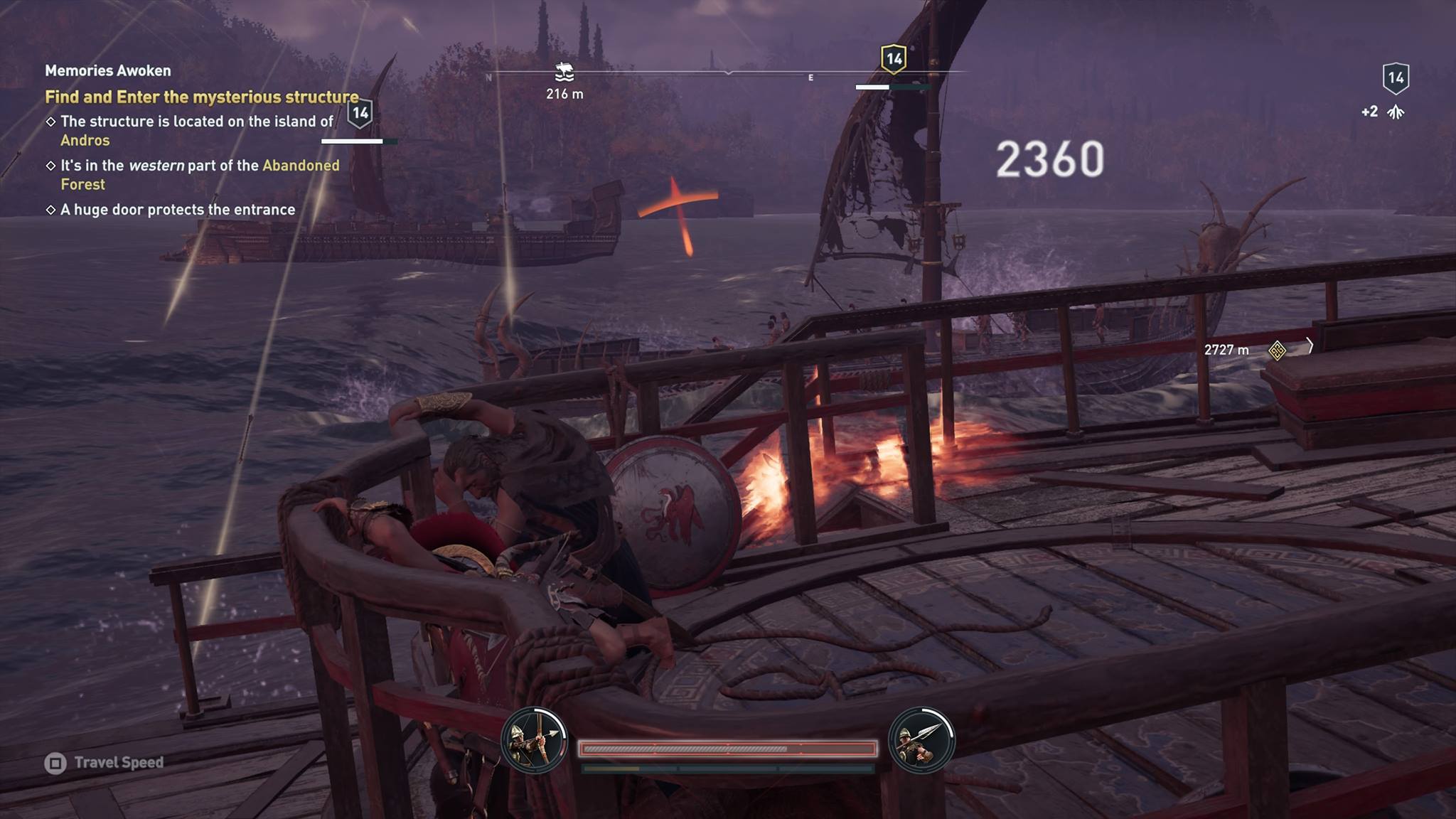 Open world games have been criticized for having so many immersion-breaking quest markers present on the HUD at once, and anyone who played Origins knows that this series is not exempt from being on the list of offenders. Players can have that same cluttered display in Odyssey, but there’s the option to turn on Exploration mode, which removes many of the icons and prevents all new quest markers from automatically appearing. The developers recommend playing in Exploration mode, but players can freely choose to switch between either mode whenever they wish.

On a technical level, Assassin’s Creed Odyssey is mostly impressive. The characters models look great during the cutscenes and generally good in battle, even though Alexios has some odd running animations. The views of when Ikaros syncs at a new vantage point are the perfect opportunity to take advantage of the photography feature. The voice actors are generally convincing, at least for the important characters. The controls for wall climbing and parkour are mostly good but not without issues. It’s easy to accidentally climb when the player doesn’t want to or decide to hang from a window sill while being pursued by half a dozen angry guards. During the course of the review the framerate did hit catastrophically low numbers a couple times. This only happened a few times, probably once every ten hours or so, but when it did happen it was terrible. The game would freeze for a couple seconds at a time and gradually progress in a skipping fashion, where something like ten seconds of actual gameplay took place over a period of one to two minutes. 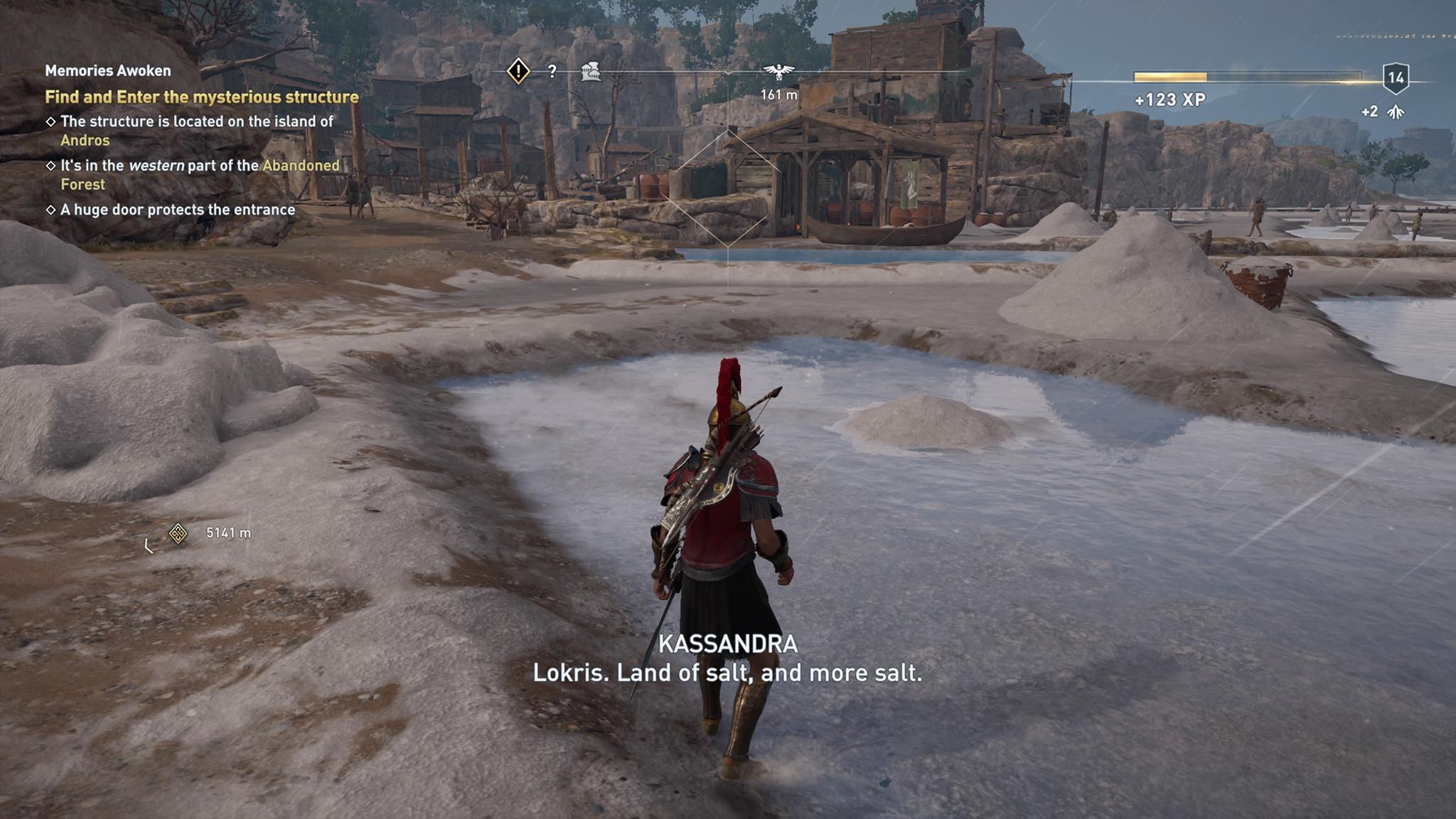 Assassin’s Creed Odyssey is a worthy follow-up to Origins, incorporating new gameplay ideas while following the same formula as its predecessor. Even though there are enough differences to not feel like a retread, one’s opinion of Origins is a good barometer for how they might feel about Odyssey. Longtime fans of the series may be disappointed in how the character selections and choice-driven narrative goes against traditional Assassin’s Creed lore. Assassin’s Creed Odyssey is not a perfect game and the tech issues in particular are fair grounds for complaints. Even with its faults the positives greatly outweighs its flaws, though some old school Assassin’s Creed fans may be in an uproar over some of the more drastic changes to the traditional formula. Despite its issues, this is a worthwhile odyssey to embark on.