The latest entry in the Assassin’s Creed franchise, Assassin’s Creed Odyssey, is almost upon us. As the eleventh mainline game, Odyssey carries with it a lot of history. We’ve come a long way since the simple story of Altair and Desmond Miles first launched. As such, what has happened so far? With so many games in this on-going franchise, there’s a lot to cover. Join us as we take a look back at the past ten Assassin’s Creed games. 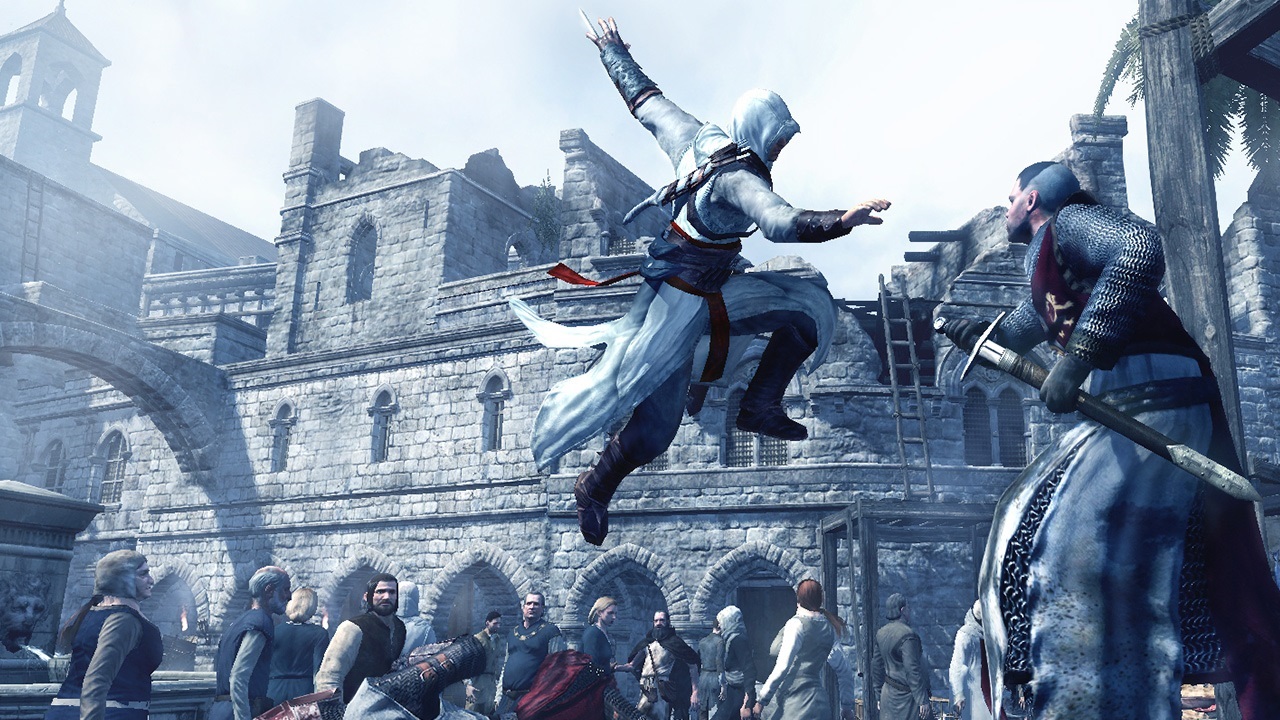 Altair’s Story: A young and brash assassin, Altair is first introduced attempting to assassinate Templar Grand Master Robert de Sable and acquire an artifact known as a ‘Piece of Eden.’ Following his failure and an attack on the Assassin stronghold of Masyaf, Altair is stripped of his rank by Al Mualim, the leader of the Assassins. Demoted to novice, Altair is sent out by Al Mualim to assassinate key Templar targets spread across the Holy Land.

Each assassination reveals another piece of an intricate plot that leads him straight to King Richard the Lionheart. Killing de Sable before he could kill Lionheart, Altair learns that Al Mualim has played both the Assassins and Templars to gain sole control over the Piece of Eden and the Holy Land. Rushing to Masyaf, Altair discovers that Al Mualim has used Piece of Eden, known as the Apple, to take full control of the Assassins. Altair manages to kill Al Mualim and take control of the Apple, which reveals locations of additional Pieces of Eden.

Desmond’s Story: Kidnapped by Abstergo Industries, Desmond Miles is forced into the Animus, a contraption that allows him to relive the history of his ancestors. His captor, Dr. Warren Vidic, wants to use Miles’ ancestor, Altair, to help discover a powerful artifact known as a Piece of Eden. It’s eventually revealed that Abstergo Industries is a front for the modern day Templars. After completing the events of Altair’s story, Desmond is saved by Lucy Stillman, an Abstergo employee who is secretly an assassin. He discovers messages left behind in his room by the mysterious Subject 16. 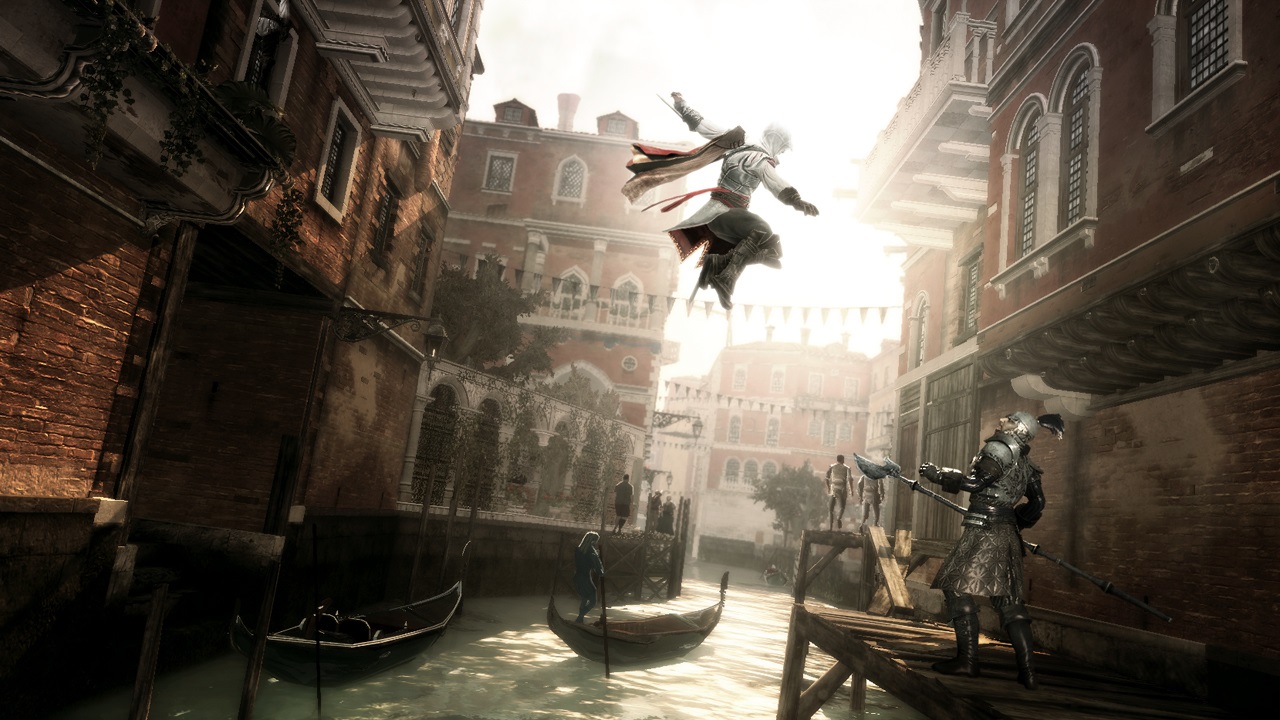 Ezio’s Story: The story begins with Ezio as a spoiled Florentine teen whose life is turned upside down following the murder of his father and two brothers. Following this, Ezio finds himself drawn into the secret war between the Assassins and Templars with his father being a high-ranking member of the former. Driven by vengeance, Ezio hunts down the tangled web of Templars throughout Italy until he discovers the grand master, Rodrigo Borgia. Determined to destroy the Medici family and take control of Italy, Rodrigo seeks the Apple, a Piece of Eden. Ezio confronts Borgia in Venice, and though Borgia escapes, Ezio manages to take possession of the Apple.

Fully inducted into the Brotherhood, Ezio tracks Borgia to the Vatican in 1499 where he has successfully become Pope Alexander VI. The Assassins discover that the Vatican sits above an ancient Vault and that Borgia’s Papal Staff is another Piece of Eden, one of the keys to opening the Vault. Ezio launches an assault where he successfully defeats Borgia, but ultimately decides to show mercy. Ezio uses the Staff and Apple to open the Vault where he meets the holographic Minerva. She explains that she was part of a precursor race, the Isu, who fought a bloody war against the humans. However, a great catastrophe nearly wiped out both races. She now reaches out to Desmond through Ezio to prevent the same catastrophe from happening again. Her message leaves Ezio confused.

Desmond’s Story: Rescued by Lucy, Desmond escapes to a warehouse where he meets fellow assassins Rebecca Crane and Shaun Hastings. Strapped back into a new version of the Animus, Desmond relives the events of his Florentine ancestor, Ezio Auditore. Lucy hopes to train Desmond as an assassin through the Animus. Though he picks up many skills, he begins to suffer from the Bleeding Effect, which forcefully blends memories with reality. Desmond also uncovers footage from Subject 16 depicting Adam and Eve escaping an Isu facility with an Apple. Abstergo eventually locates the crew, forcing them to escape. 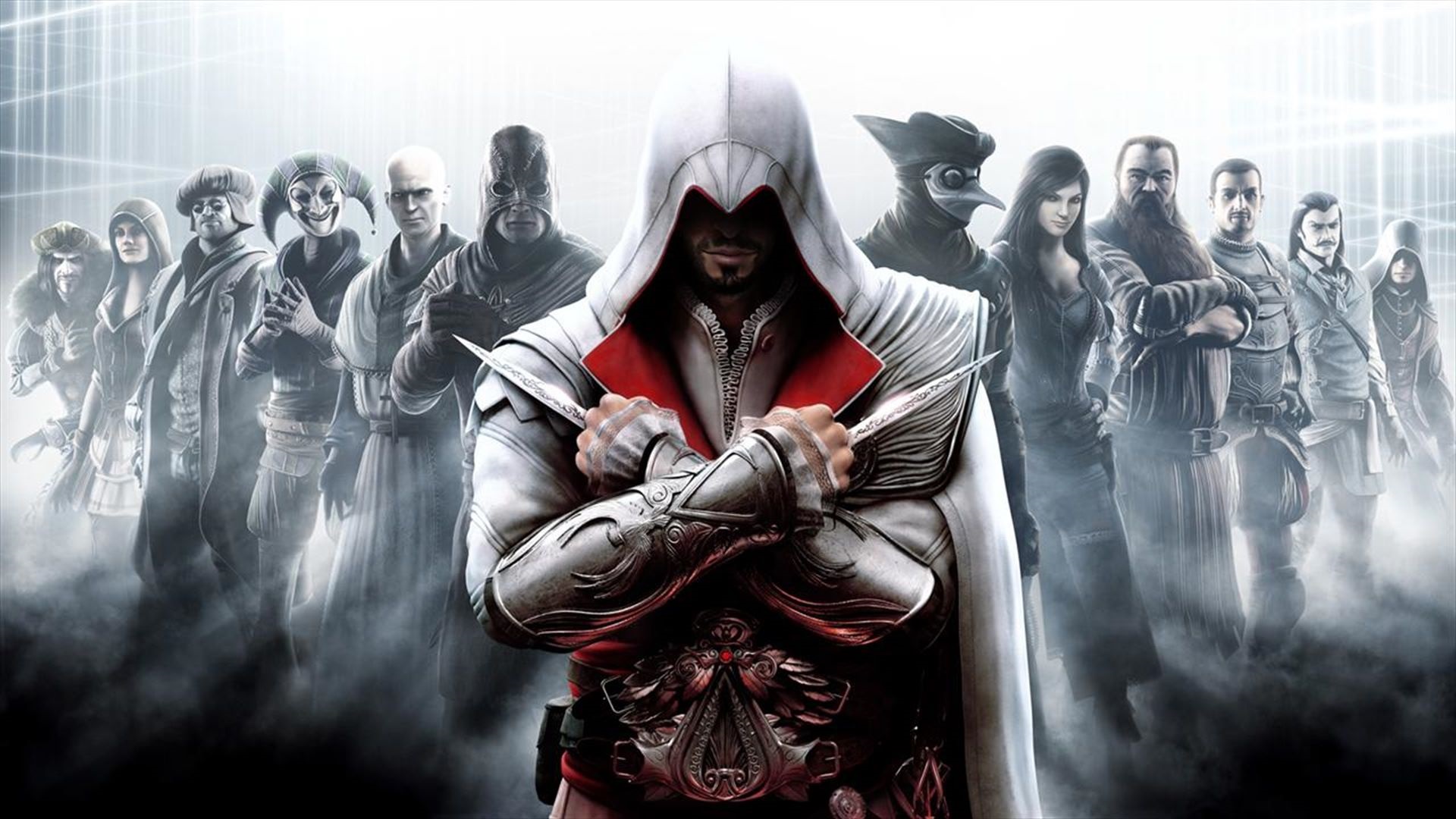 Ezio’s Story: The game opens up with Ezio and his uncle, Mario, escaping the Vatican. Returning to their home in Monteriggioni, the town is quickly attacked by Cesare Borgia, the son of Rodrigo Borgia who takes Ezio’s Apple. Left for dead, Ezio flees to Rome where he begins establishing a new Brotherhood to overthrow the Borgia’s strangle on the city. He quickly broke the Borgia’s influence by sabotaging their arsenal, funding, and French support.

In a fit of rage, Cesare murdered his father in an attempt to claim the Apple. However, Ezio beats him to it and uses it to systematically destroy what’s left of Cesare’s forces within Rome. Defeated, Cesare fled the city. Ezio managed to track him down to Viana in 1507 where he finally put an end to the Borgia’s grip on Italy. Afterwards, he hid the Apple inside a Vault under the Santa Maria Aracoeli.

Desmond’s Story: Fleeing from Abstergo, Desmond and company take up residence in Monteriggioni. Utilizing the Bleeding Effect, Desmond is able to find a way into Assassin’s stronghold underneath the Auditore estate. After completing Ezio’s story, they all travel to Rome to unearth the Apple. While searching for it, Desmond is visited multiple times by the Isu Juno who tells him of the downfall of humankind. They eventually reach the Apple, but Juno uses her influence to control Desmond and have him stab Lucy.

Lucy dies and Desmond goes into a coma. William Miles, Desmond’s father, commands that the comatose Desmond be placed into the Animus till he reawakens. 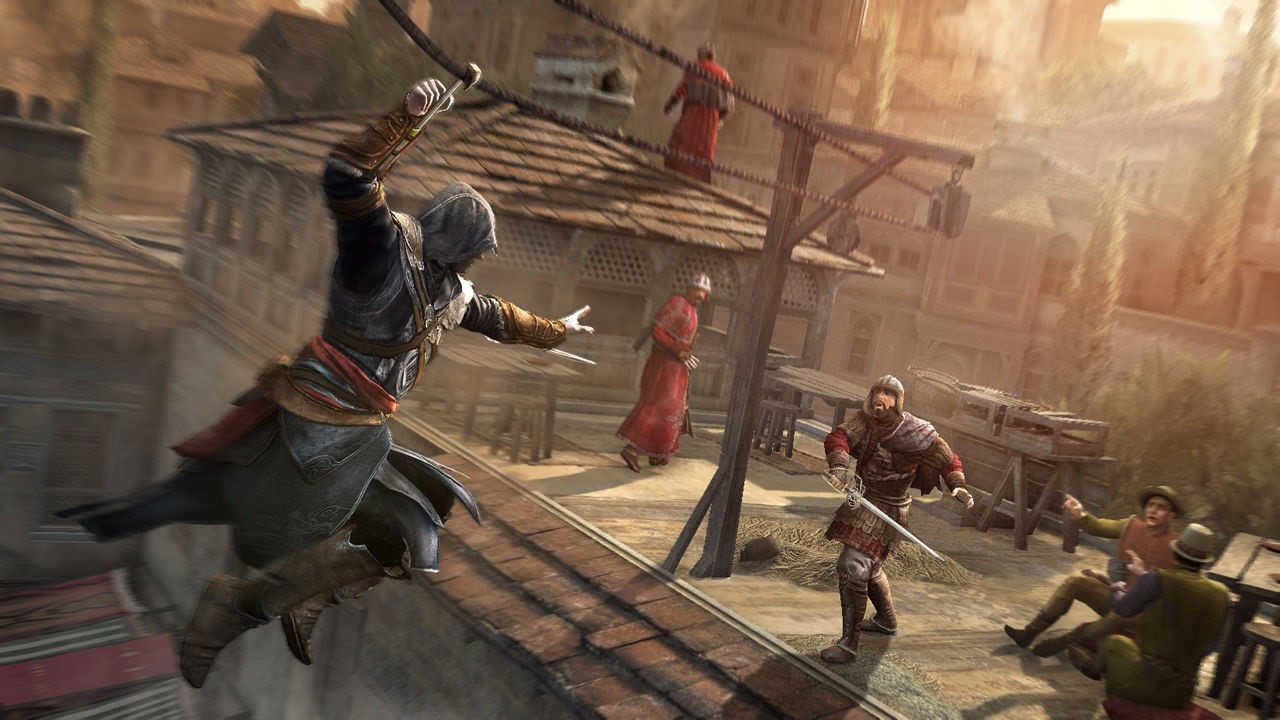 Ezio’s Story: The master assassin heads to Masayf to discover the hidden library of Altair, however learns that it is controlled by Templars. After fighting them off, he learns that the door to the library requires specially crafted keys that are hidden throughout Constantinople. Traveling to the city, Ezio meets up with the region’s lead assassin, Yusuf Tazim. He also meets a woman with who he becomes infatuated with, Sofia Sorter.

During his search, Ezio encountered yet another Templar conspiracy that sought power of the region and access to Altair’s library. Unfortunately, Ezio was not quick enough to discover Prince Ahmet’s deception, which led to the death of Yusuf and the capture of Sofia. After an intense chase, Ahmet was killed by his brother Selim, who then spared Ezio’s life.

Returning to Masyaf, Ezio used all the keys to unlock the ancient library we he found nought but dust and the skeleton of Altair. Ezio found Altair’s hidden Apple, which displayed another vision. Relayed by the Isu Jupiter, the vision showed the horrific catastrophe that doomed the Isu and nearly wiped out mankind. Following this, Ezio laid down his arms, accepting retirement.

Desmond’s Story: After falling into a coma, Desmond finds himself in the Animus’ Black Room where he meets an imprint of Subject 16, Clay Kaczmarek. Clay explains that to regain consciousness and exit the Animus, Desmond must continue to relive the life of Ezio until a Synch Nexus is triggered. While reliving Ezio’s memories, Desmond confronts his past as he reconstructs his mind. He reveals he was raised on a placed called ‘The Farm,’ and ran away from home due to strict parents. Clay also reveals that Lucy had swapped sides and became a Templar agent.

Desmond is contacted by Jupiter who reveals that he and the Isu attempted to stop the great calamity, but failed. All details regarding their plans were uploaded to the Grand Temple, which Jupiter reveals the location. Waking up from the Animus, Desmond reveals to William, Shaun and Rebecca that they need to head to New York. 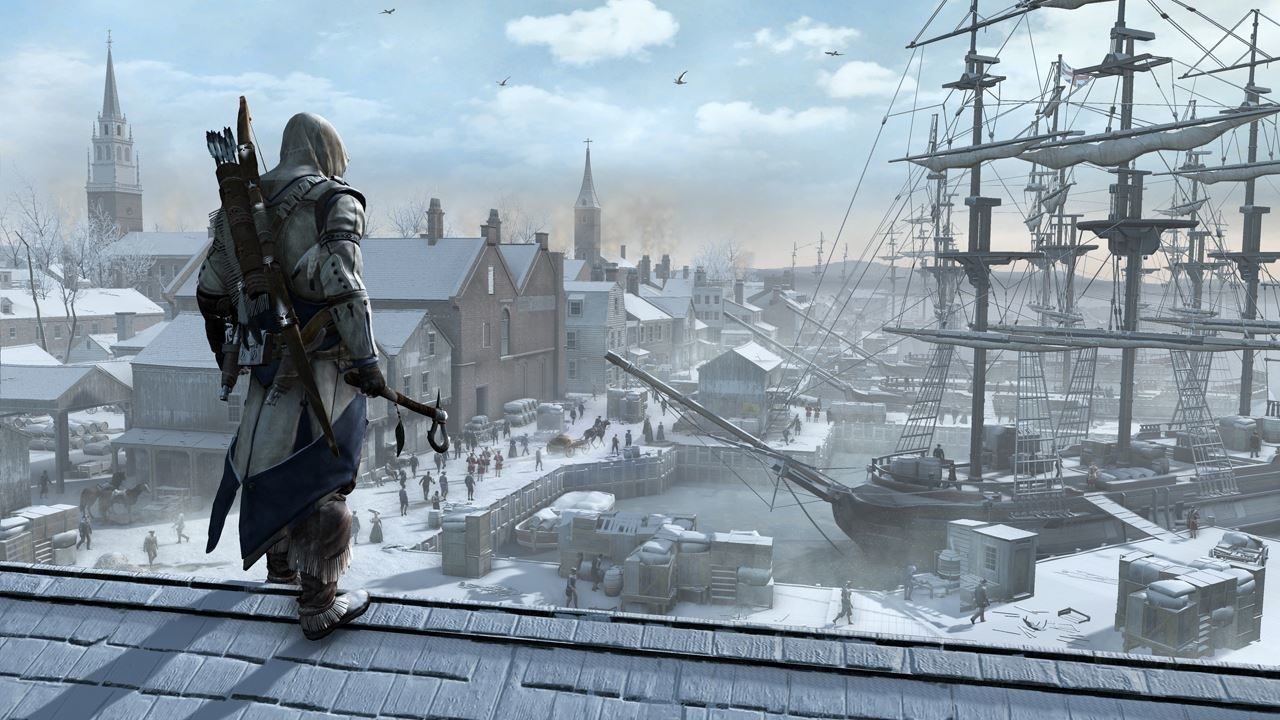 Haytham’s Story: Following the assassination and acquiring an artifact, Haytham Kenway is dispatched by his superiors to the Americas to find a precursor site. Once there and forming a brotherhood, he works to gain the trust of local native populations who know the land. One of those is Kaniehti:io, who promises to help him find the site if he kills the man responsible for enslaving her people.

Haytham accomplishes this and Kaniehti:io keeps her promise. The artifact, however, is unable to unlock the precursor site. Both Haytham and Kaniehti:io give in to passion, resulting in the conception of a child. Later, it is revealed that Haytham is not an assassin, but is, in fact, a Templar.

Connor’s Story: The conceived child was born as Ratonhnhake:ton, who enjoyed a peaceful upbringing until soldiers, under the command of Charles Lee, burned his village, which caused the death of his mother. Vowing revenge, Ratonhnhake:ton finds a sphere where the Isu Juno communicates with him. Taking her advice, he visits a nearby man named Achilles Davenport. Once the leader of the American Assassin Brotherhood, Achilles is now an old man who reluctantly agrees to train him. He also gives him the name ‘Connor.’

Following induction into the brotherhood, Connor moves to eliminate each of the Templars. This eventually leads him to his father, Haytham, who he reluctantly teams up with for a brief period. That alliance comes to an end when Connor discovers that George Washington has ordered the removal of his people from their lands and that the Templars have stoked agitation between the tribe and Continental Army. Connor later assassinates Haytham during an attack on New York.

With just Charles Lee left, Connor moves to end his mission and acquire the artifact. After accomplishing this, he returns to his tribe’s land to discover they have all been moved. He speaks with Juno, who tells him to bury the artifact, which he does in the grave of Achilles’ deceased son, Connor Davenport. His mission done, Connor returns to New York to watch the remainder of the British army leave the newly formed country. However, he also notices slaves being traded and realizes the country isn’t truly free.

Desmond’s Story: Alongside his father, Rebecca, and Sean, Desmond uses the Apple from Rome to open the Grand Temple. Inside they learn that not only do they need to find an ancient artifact, but also need to acquire power cells to boot up the temple. During the events of the game, Desmond travels to Manhattan and Brazil to obtain these cells where he regularly runs into Templar resistance. This includes Daniel Cross, a fellow Animus Subject who has been brainwashed by the Templar Order.

Powering up the Grand Temple, Desmond is consistently confronted by Juno who informs him of all attempts made to stop the calamity. All those efforts failed. We’re also first introduced to her husband, a human named Aito. A final power cell is discovered in Cairo, which William goes to find. Unfortunately, he is captured by Warren Vidic, who demands Desmond bring him the Apple. Desmond goes but uses the Apple to kill Vidic.

With the temple fully powered up and in possession of the artifact, Juno leads Desmond to the Eye, the only solution she says can save the Earth. Before Desmond touches it, however, Minerva appears to warn him. If he activates the Eye, he’ll die and unleash Juno from her prison, which will allow her to conquer the world. Juno was initially imprisoned for plotting to use the machines to take control of the world. Minerva also informs Desmond that should he not use the Eye, some of humanity will survive and that the current conflict between Assassins and Templars is bound to continue.

Desmond opts to sacrifice himself. The Eye kills him, but does successfully prevent the calamity. A now free Juno walks over Desmond’s body thanking him for playing his part.