Developer Ninja Theory today announced that it has partnered with 505 Games for the physical release of Hellblade: Senua’s Sacrifice on PlayStation 4.

The action-adventure title will hit retail shelves in Europe and North America on December 4 and will be priced at $29.99 (£24.99).

According to the developer, Microsoft will be publishing the physical version for Xbox One, which will launch at the same time as its PlayStation counterpart.

Stepping into the role of the Celtic warrior Senua, players must help her save the soul of her dead lover from the Viking hell. 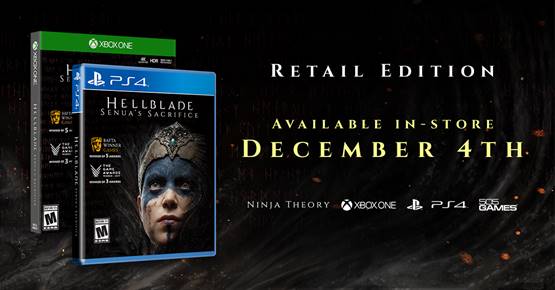 Box art for Hellblade: Senua’s Sacrifice on PS4 and Xbox One.

Ninja Theory’s independent AAA title has been a critical success, with it receiving nine nominations at this year’s BAFTA Games Award and taking home five awards.

When it comes to its performance commercially, the title has sold over one million copies across all platforms.

Last month, members of Ninja Theory’s development team and Melina Juergens, who provided motion capture and voice acting for Senua, attended BAFTA’s Guru Live session in London to talk about the importance of mental health in the title.

“We had a really special moment at the end of the game where we invited everyone we had worked with to come and see the whole game,” the studio’s commercial director, Dominic Matthews, revealed at Guru Live.

“We were right at the end of development and when we got to the end of that and we got to that last scene and they saw it and they said that they loved it and found it incredible. It was hard to not really break down at that point.”

Hardcore Gamer’s review for Hellblade found that there is “no denying Ninja Theory’s narrative depiction of mental health is an infectious one — the type of narrative that has been long overdue in this industry.”