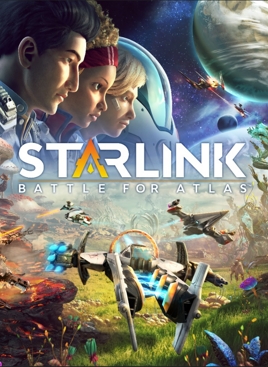 It was in 2017 during E3 that Starlink: Battle for Atlas was first revealed to the world to good and mixed reception. The heavy emphasis on the toy ships themselves left some people wondering what the focus would be. Fortunately this year during E3 once more we got an even better look at Starlink, in addition to a huge surprise for Nintendo fans in the way of a Star Fox crossover. With a huge showcase and overall presence at E3, Starlink was on roll and looking like an in-depth space adventure with the option of purchasing awesome-looking figurines. Does it pull off its toys-to-life feel as intended without interrupting the gameplay itself or just another attempt that will only really appeal to a niche audience?

The story of Starlink follows a small crew aboard a large ship called the Equinox. Upon exploring further into the Atlas star system, the group is attacked by the Fallen Legion and finds themselves temporarily stranded on a foreign planet. After managing to help some of the nearby inhabitants the team manages to pull themselves together, but at the loss of their captain who has been taken by the Legion. They then set off with two simple goals in mind: get back their captain and help protect Atlas as the Legion continues their assault. Those on the Nintendo Switch version of Starlink will also be introduced to the Star Fox crew, who in turn has their very own story to be told as the secrets of Atlas begin to unfold.

Controls in Starlink are wonderfully simple and straightforward either out in space or down on one of the many planets. The left analog stick takes care of general direction movement, while the right turns the ship instead of a traditional camera just rotating around them. Bumpers are allocated to the gun placed on either side of the ship and each style of gun offers a different element or affect that can be used on enemies. Players will typically be fighting either in the air freely moving or lower to the ground with the ability to jump and dodge. Each style offers different ways to approach combat, but mixes it up when in a zone that completely restricts flight and requires quickly adapting to the situation. Combat in space is also completely free, and although there can be a lot of movement in a big open area, it never feels confusing to find enemies or disorienting when moving in all different directions. There are also simple tricks that can be pulled off while exploring, which will recharge a ship’s energy if pulled off successfully and make for a fun task to do while exploring. 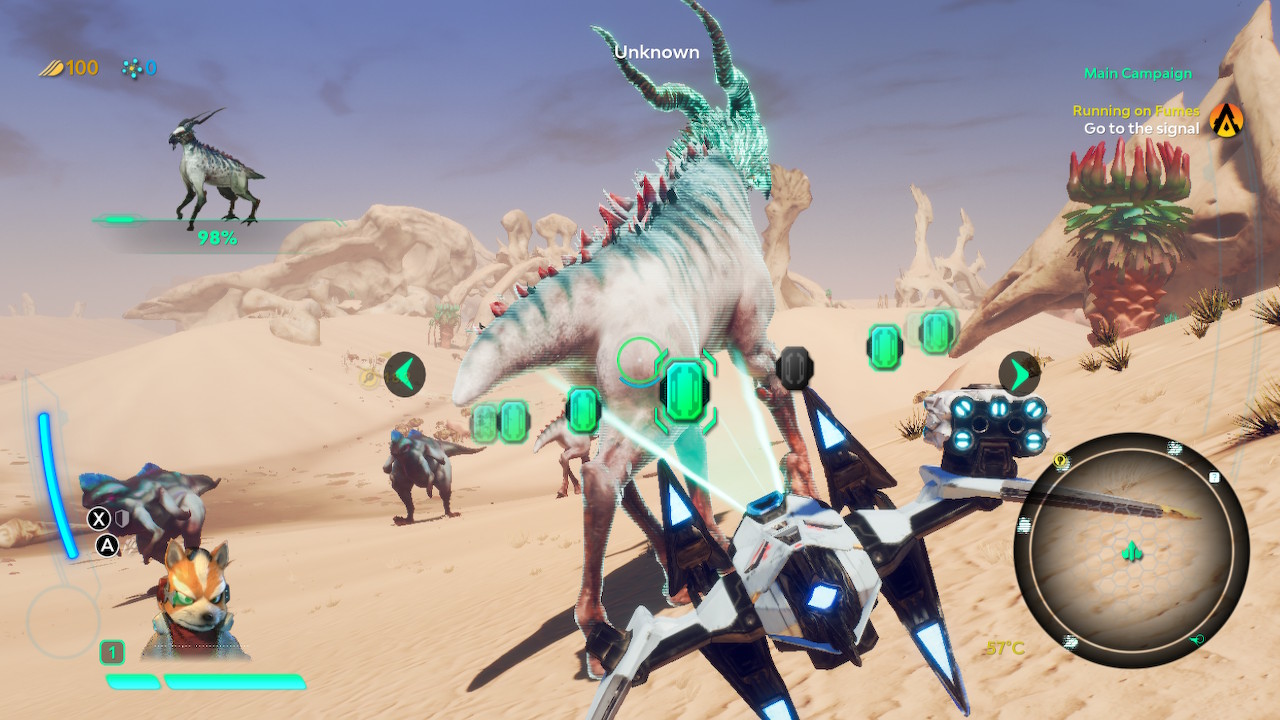 Most of the gameplay will usually take place on one of the many planets in the Atlas system and this is also where Starlink opens up to exploration. Once a planet has been visited, it can be freely explored right from the get-go. At the beginning players will discover two different kinds of buildings and inhabitants they can interact with, those part of an Observatory and those part of a Refinery. Befriending these through accomplishing quests will ally them with Starlink and allow their abilities to be used in their favor. Observatories offer mapped-out terrain on the planet while Refineries give the character a set amount of money, known as Electrum, after some time has passed. Characters will need to gather resources from the planet in order to upgrade these ally bases by exploring the planet and can even research the local fauna to get more experience and learn a little extra lore about how the planet functions. Over time as the story is progressed, two more key buildings will be able to be accessed and even built in order to help pilots on their journey. Each planet is also home to Warden spires, which include small puzzles to unlock items and currency in addition to extra story about the ancient race that left them there. Although every planet will be similar in what they contain, no two feel exactly alike and are fun to explore every inch of while learning more about them. As time goes on players will have to manage all the planets by building enough that they are able to at least fend off the Legion and defend themselves, otherwise their journey to save Atlas will only get more dangerous.

Outside of planets is, of course, space. For the most part space is used to simply travel to and from each planet but does offer its own change up in combat. Outlaw hideouts can be found while traveling through space, usually through defeating a group on a planet, but offer great rewards for defeating them. Space travel also offers various secrets to be uncovered in the way of wreckage and treasure. Traveling through space can feel slow at first, but hyper and quick travel soon become available to make things snappy. Once the story has progressed far enough, large Legion ships known as Dreadnoughts will also begin appearing and delivering power to their allies on the planet below. Destroying all the Legion enemies on a planet will weaken the Dreadnought and they can be taken down in a huge boss fight at varying difficulties depending on the Legion status of the planet. 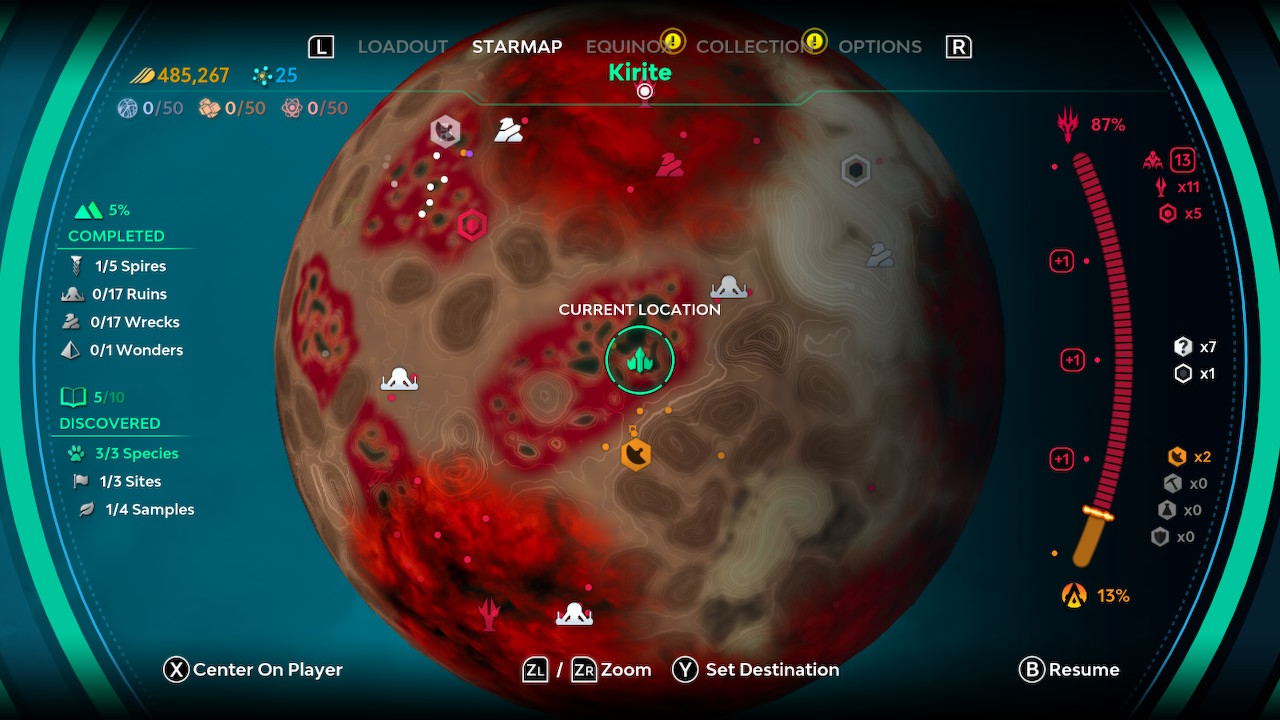 While Starlink is playable without every having to use any of the physical models themselves, they’re enjoyable to use while playing. On the controllers themselves, the adapter that holds the ships can seem large but actually isn’t that intrusive when it comes to getting a good grip. The ships are also lightweight, but sturdy, and aren’t at all in the way during gameplay. Switching between weapons and other parts is just as quick as one would hope, and makes it easy to adapt at any given moment. Taking the actual core ship part off can take a little bit of getting used to, but this isn’t often an issue if players don’t plan on swapping frequently. The methods of change take a little bit of an extra step while playing digitally, but are still fast and easy to change on the go. As each ship has its own stats, choosing which one to go with can depend on each individual player and what they’re attempting to do. A extra nice touch is that certain parts of the Starlink ships or guns will even light up when attached, making for a wonderfully-engaging feeling while playing.

Every part of the ship, from each gun to the character themselves, can be upgraded in various ways. For every level a character gains they earn skill points that can upgrade their abilities in combat. The ship parts, however, use mods that are gained through fighting enemies or completing quests. These mods have different abilities to boost various aspects of the ship such as speed and defense. Mods are key to building a strong ship and can increase the chance of surviving, taking down enemies quicker or even just improving the overall effectiveness of certain elements. Perhaps the only thing that feels a bit awkward is that once a mod has been placed on a gun or ship part, it can’t be removed unless that part is currently equipped which is only a problem when playing with the physical models. There are a lot of small nuances guns offer in battle as well, such as being able to create a special elemental combo with two different weapon types, which makes mixing and matching a fun learn by trying scenario. 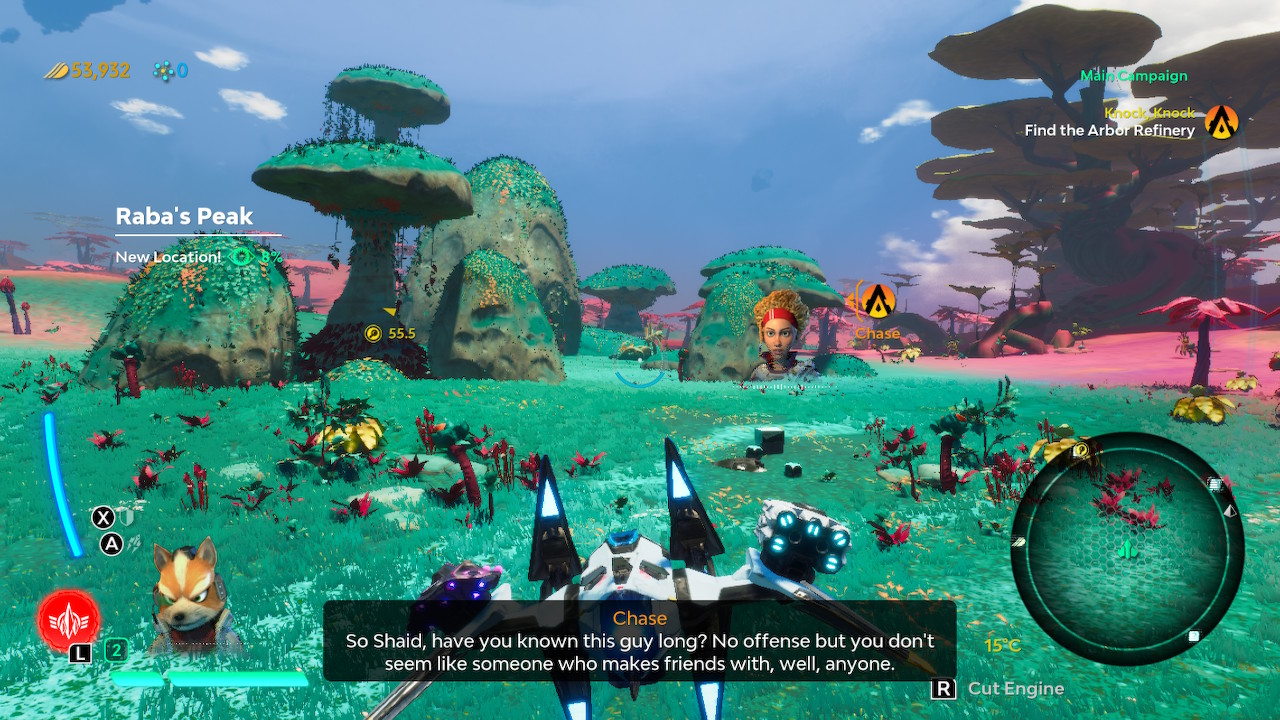 Those who want to pick up and play Starlink with a friend also have the option thanks to local multiplayer. A second player can jump in easily at any time, as long as there are enough guns, ships and characters available. Those who want the full treatment will have to buy a second ship dock for the second controller, but otherwise second player can jump in as a digital version of their favorite character. Together friends can team up to take on the Fallen Legion and the second player is capable of interacting with everything the same way first is. The pair will share parts and take down large or small enemies together any way they like as a team. While completely optional, the multiplayer works well albeit it can have a few extra frame drops now and then simply due to Starlink working overtime for both players on the same screen, but is still fully playable.

The art style in Starlink is gorgeous. Each planet has unique terrain that makes it fun to stop and look at something or enjoy the scenery while up in the air. Every enemy stands out and is easy to see, never blending in to the background and making them too difficult to target. The characters, be them NPC or otherwise, are all well designed and fit the mystical feeling of humans meeting unique alien inhabitants everywhere they go. The framerate is consistent, with barely any noticeable drops even while playing in handheld mode on Switch. Although there’s a difference in quality while playing handheld, it still looks, plays and runs fantastically that it’s a worthwhile way to have at it. Handheld mode will drain the battery fast, however, even on more battery saving modes. Perhaps one of Starlink’s small flaws is that the quests and exploration on each planet follow the same pattern which can feel repetitive, but these quests are typically short and easy allowing players to complete them quickly and continue on the same pace without feeling like they’re dragged down at all. There’s also a small pool of enemy types that can make running into the same ones dull at times, but since the fights aren’t necessarily a constant, running into them over and over doesn’t feel too repetitive. 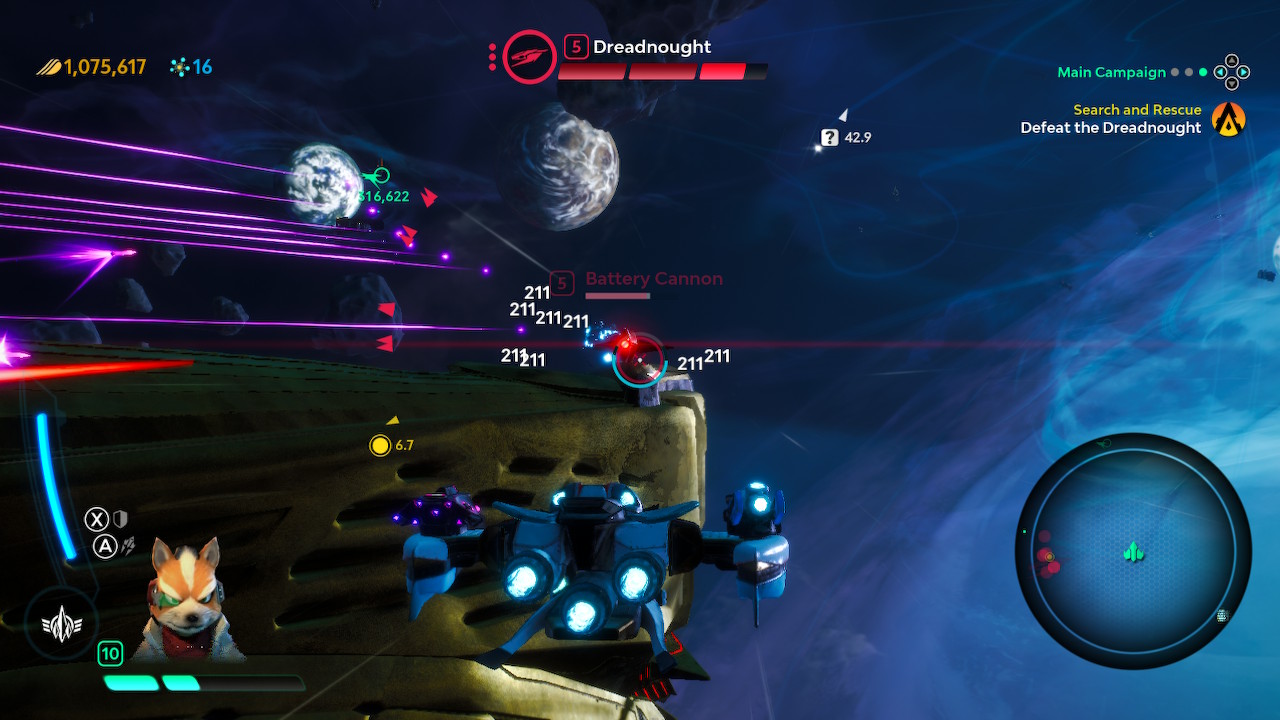 There’s no other title with quite the same approach as Starlink has taken and it’s easily the best integration of toys to life that has been done so far. Each planet, and even space itself, gives tons of amazingly fun exploration opportunities for each pilot and the worlds of Atlas are filled with a good amount to experience along the way. While the heavy emphasis on toys may seem as though it’s aimed at a younger audience, Starlink offers a great amount of challenge and fun for players of any age and shouldn’t be counted out because of it. Anyone who has been looking for an amazing take on an open world space adventure doesn’t need to journey much farther, as Starlink: Battle for Atlas supplies one of the most enjoyable journeys yet.