Gunslingers in the wild west have been the subject of many memorable video games such as Gun, Custer’s Revenge, Lethal Enforcers II and probably another one or two are in there somewhere. What is generally considered the most celebrated is 2010’s Red Dead Redemption, or Grand Theft Equine as it’s commonly referred. Like one or two other Rockstar titles, Red Dead Redemption was met with near universal acclaim and is still fondly remembered almost a decade later. The upcoming sequel is one of the most anticipated titles of 2018, and with that release just around the corner it seems like a good time to look back on the tale of John Marshton.

The year is 1911. John Marshton was once a dangerous outlaw but has left that life behind to pursue the simple pleasures of being a family man. John is enjoying his new life until the Bureau of Investigation visits him to work out a deal with him and take his wife and kid into custody for leverage. As a former outlaw, John is facing some serious penalties for his past but the FBI is willing to cut him a break if he brings his former gang members to justice. John agrees to these terms, not like he has much choice, and travels to Fort Mercer to confront his former rappy, Bill Williamson. Things go horribly wrong and instead of bringing anyone to justice, John is shot and left for dead, only to end up in the care of Bonnie MacFarlane.

After a few days John is good enough to start helping around on the ranch like any gunslinger who recently received a near fatal wound would. Before too long John is working with the US Marshalls and some other interesting characters. In the same vein as Grand Theft Auto, John ends up doing odd jobs for these varied characters to help form an alliance for another go at Fort Mercer. This second attempt goes better, except in victory it turns out Williamson is a cowardly bastard who fled to Mexico. This seems bad, but this also means that Mexico is unlocked and border crossing was much easier a little over a century ago. 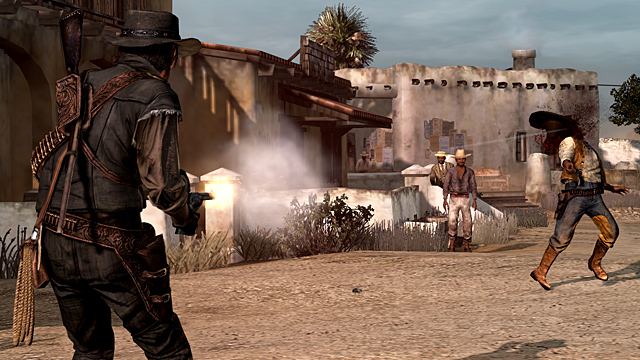 Calling Red Dead Redemption Grand Theft Equine is a dumb joke, even by my standards, but the GTA influence is as visible as the scars on John’s face. The game is played in a large open world map that spans part of Mexico and part of the western American frontier, divided into three regions that are unlocked as the story progresses. John’s actions can influence his fame and honor which have an impact on how townspeople react to him. Helping innocent people fight off bandits may improve his reputation but gunning down those same innocent townsfolk will have the opposite effect. Like GTA titles there is a wanted system, where if John decides to commit crimes he can attract the attention of the law and depending on how far he wants to take it this may escalate into military involvement. John can surrender to the law men, kill them all or simply high tail it out of there until the heat dies down. The problem with the last two options is the law might give up on John but that just means they’ve decided to send a bounty hunter after him so they don’t have to deal with him themselves.

There is a linear story path to follow, but there are plenty of side opportunities to engage in. Each region has a few forts that need to be taken over, much like the same style as the battle at Fort Mercer. There are many characters that require assistance from John and these quests are usually entertaining. One quest involves a man with an undying love for his woman and another series of events from a quest giver involves a man who really gets under John’s skin in the last quest he gives. Random events happen throughout the world such as highway robberies, hangings and other random encounters with strangers, making the game world feel alive. Rockstar games are known for their sense of humor and some of their dark humor naturally crept into Red Dead Redemption. One of my favorite achievements I ever unlocked happened in this game. A few years ago my girlfriend was hanging out at my apartment and I decided to show her this game (she may have bought it for me for a birthday present but I can’t remember). I thought it would be funny to lasso a girl and leave her on the train tracks, like a mustache twirling silent film villain. As the locomotive turned the damsel in distress into a much gooier state of existence, an achievement popped up on screen. It’s good to know that my sociopathic tendencies aren’t so unusual that the developers weren’t able to anticipate my behavior. 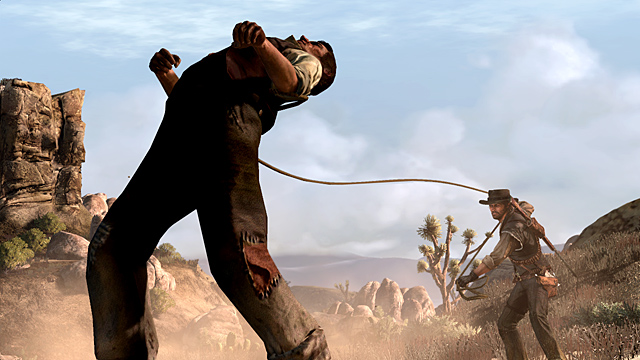 Part of what made Red Dead Redemption great was its characters. John Marshton was one of the better protagonists in a Rockstar game, which is not exactly a small feat given some of the other games they’ve put out. Giving up his outlaw life to be a family man after a bank robbery went awry, he maintains his tough exterior but seems to be making an honest attempt at being a decent human, even if doing so within the confines of the law is somewhat negotiable. The bar was set high enough with Marshton where the only thing I’m mildly worried about with Red Dead Redemption 2 is whether or not the new protagonist can match him. Aside from the lead there were numerous other characters. Nigel West Dickens was one of Marshton’s more entertaining companions. Dickens was a swindler and snake oil salesman if there ever was one, but he did assist John on a few occasions, even if it was painfully obvious John wanted nothing more than to pistol whip him.

Red Dead Redemption was a blast, with numerous side quests, activities and just a big open sandbox world to play in. Great game mechanics and design made it fun, a great story is what made it memorable. The pacing of the story doesn’t ever hit any major lulls and the character of Marshton is sympathetic enough you end up rooting for him, since after all he’s a good guy who just wants to be back with his family. And in trying to get back with his family he ends up being jerked around by the government. After jumping through endless hoops from the government they betray him. The ending of Red Dead Redemption is one of the sadder endings in a video game. The true ending occurs in 1914, and while there is a shot at setting things right, it ultimately feels hollow and unsatisfying. This sounds like a knock against the game, but in reality it is a testament to how powerful the narrative of Red Dead Redemption actually was. 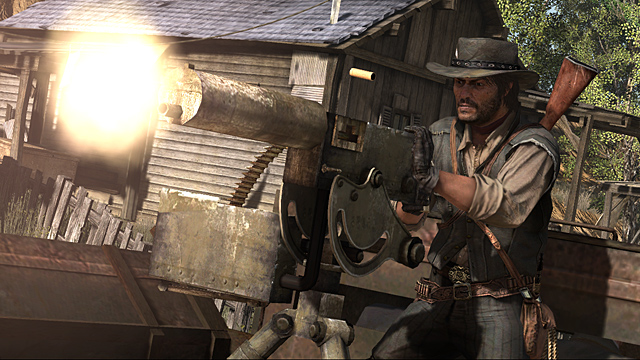 Red Dead Redemption is simply one of the best games available for the seventh generation consoles. It did receive a zombie-themed expansion pack called Undead Nightmare, which was a fun novelty but didn’t resonate the same way the base game did. The Grand Theft Auto San Andreas Bigfoot reference was rather humorous, though. It clearly uses the Grand Theft Auto games as a template but ends up finding its own identity through the setting, characters and storytelling. Red Dead Redemption 2 is one of the most highly anticipated games of 2018, and with the quality of its predecessor, it has big boots to fill.