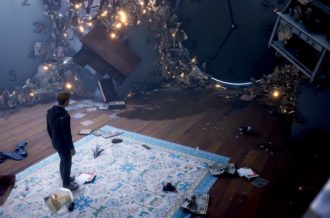 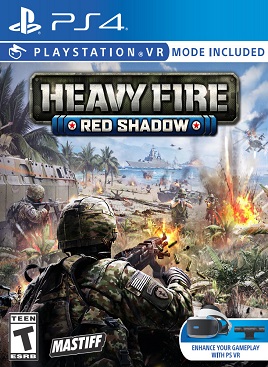 The Heavy Fire series has been one that has received derision from the more discerning gaming populace. A light gun game adopting Call of Duty aesthetics, the games never captured a real sense of fun with its drab looks, underpowered gunplay and lack of explosive set pieces leaving the titles feeling like bargain basement fare. Audiences, however, disagreed. Players wanted something a little more adult oriented that still took advantage of the Wii and PlayStation Move’s motion interface and a modern military shooter fit the trends of the time well. The latest in Mastiff’s series, Red Shadow, has decided to take things in a bit of a different direction. Instead of an on rails shooter, the player takes command of a stationary turret to blow away oncoming waves of baddies that would prefer to stand in the spot the player is currently occupying. It has the best shade.

In regards to story, Heavy Fire: Red Shadow still tries to maintain the dour and serious tone that informed the previous games. This time around, though, they took it so far that it circled the scale, becoming silly. Starting off with the narrator scratching at the fourth wall by explaining what happened didn’t seem believable to him either, the game tells a fictional tale of North Korea and a world that loses its collective reasoning abilities. Based on the writing, the author either combined a specific ignorance of the region’s politics with a personal misunderstanding of the various geopolitical ideals that inform people on differing ends of the spectrum or they are pandering to those with the same affliction. Upon witnessing this monument of what is, hopefully, satire, I rolled my eyes so hard that they became a pair of de facto blender balls, rendering the contents of my skull a protein shake of questionable flavor.

Then there is the gameplay itself. The entire bulk of it is spent at a machine gun turret with 360 degrees of movement. Taking place in four different environments with two decent length stages apiece, there isn’t much in the way of visual variety. It quickly devolves into shoot the baddies, use a perk, then shoot more baddies. There is also a skill point system to augment the abilities on hand and a rocket launcher because there is always a rocket launcher in these games. It’s incredibly basic. 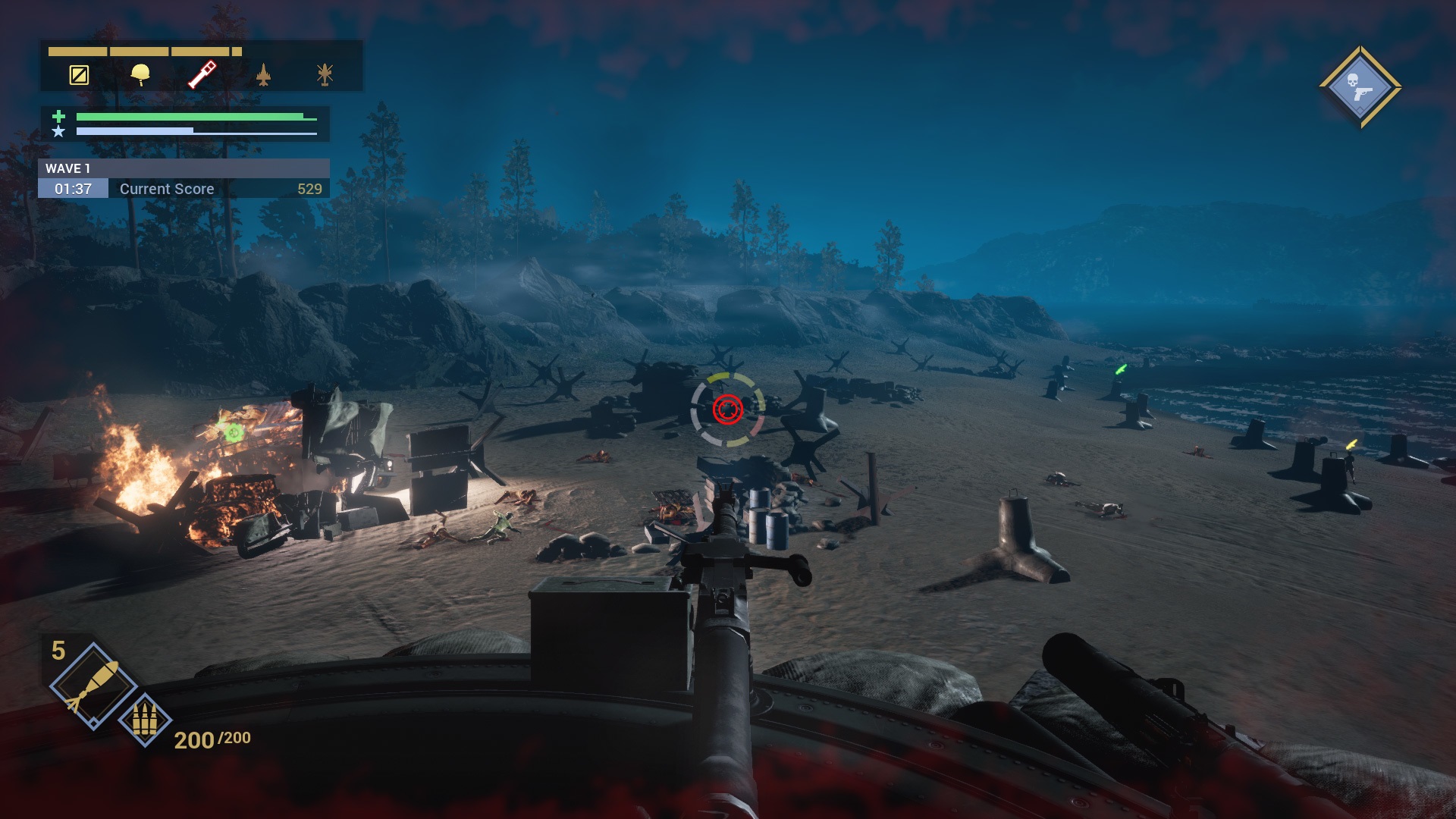 That simplicity is also part of the fun. It’s easy to zone out and mindlessly mow down the hordes of enemies that keep popping up. The sense of power from the basic machine gun really does make the player feel unstoppable. Tack on a perk that removes the need to reload, and the addition of explosive bullets, and the majority of the game is smooth sailing. This isn’t something to play to be challenged; it isn’t until the last stage of the final level that the game even makes a token effort to truly make the player pay attention. This is the type of game that seems centered around giving the player a feeling of control in a chaotic world.

That chaotic world part is represented well with the multitude of bugs that riddle the title like a termite snack cake. Possibly the best one is found in the trucks. One of the enemy types is a troop transport that will park and spawn squishy, squishy troops to shoot. In theory, these are supposed to rush on to the field, stop and begin dropping baddies. In practice, they run around the field like a hyperactive toddler, zipping back and forth, literally fall over, bounce back up and continue running around. It’s adorable. 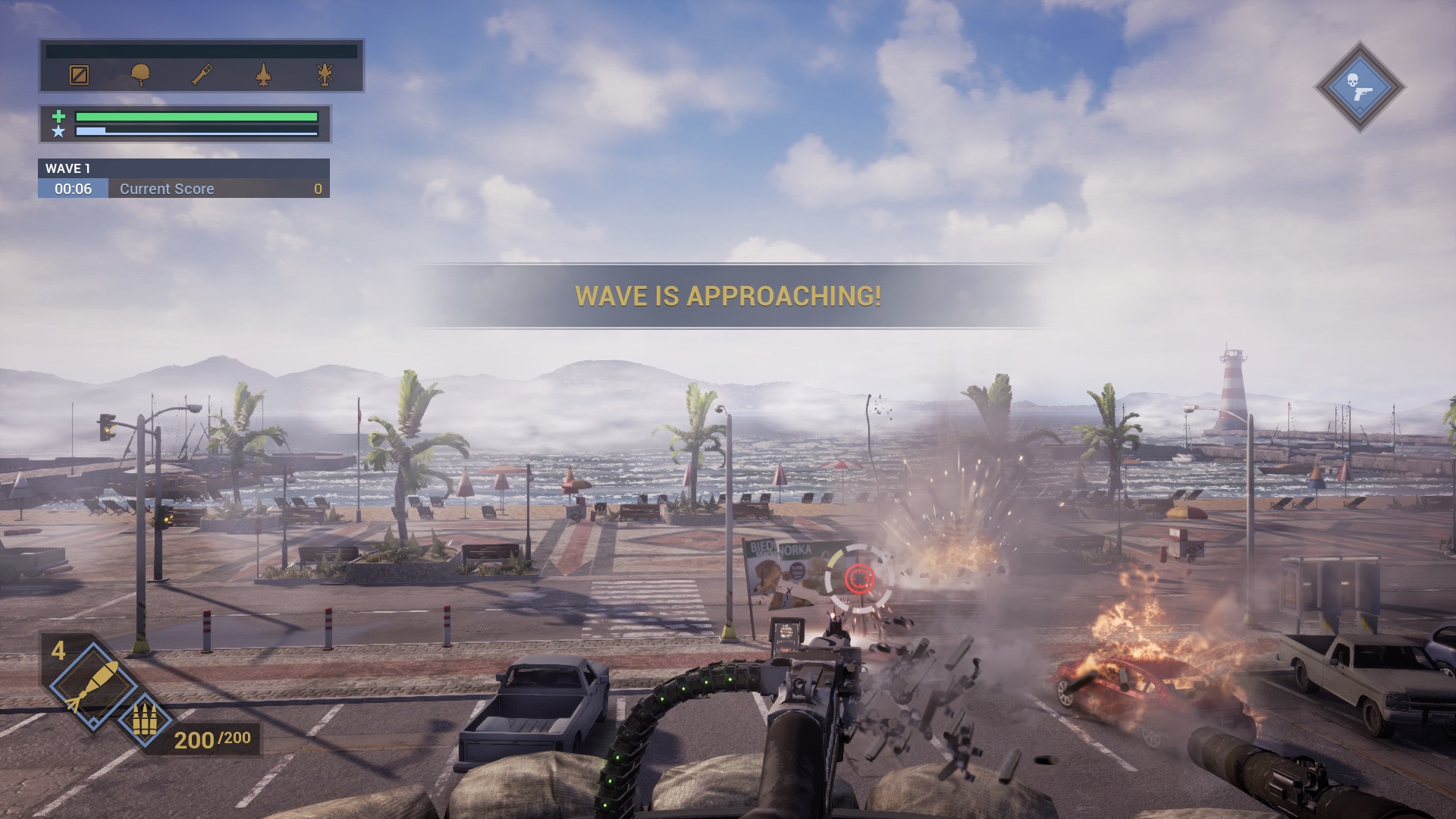 Another other great quirk isn’t a bug, just more of an oversight. The environments are, to the developer’s credit, covered in destructible objects that lend to the sense of power at the player’s hands. Jet planes explode, buildings fall apart and brick crumbles. Still, the player’s weapons are no match for the almighty palm frond. Those things are famously indestructible. There’s a reason why the Weapon X project coated Wolverine’s bones with palm fronds, which is also why he is almost never drawn without his trademark mai tai drink in hand.

Were these pieces of silliness the only detriments in the Heavy Fire: Red Shadow experience, the game would be an easy recommendation. It plays like something Tommy Wiseau would make if he set his sights on interactive entertainment instead of film.  It’s almost genius in how terrible it is. Regrettably, there’s a couple of other big problems. 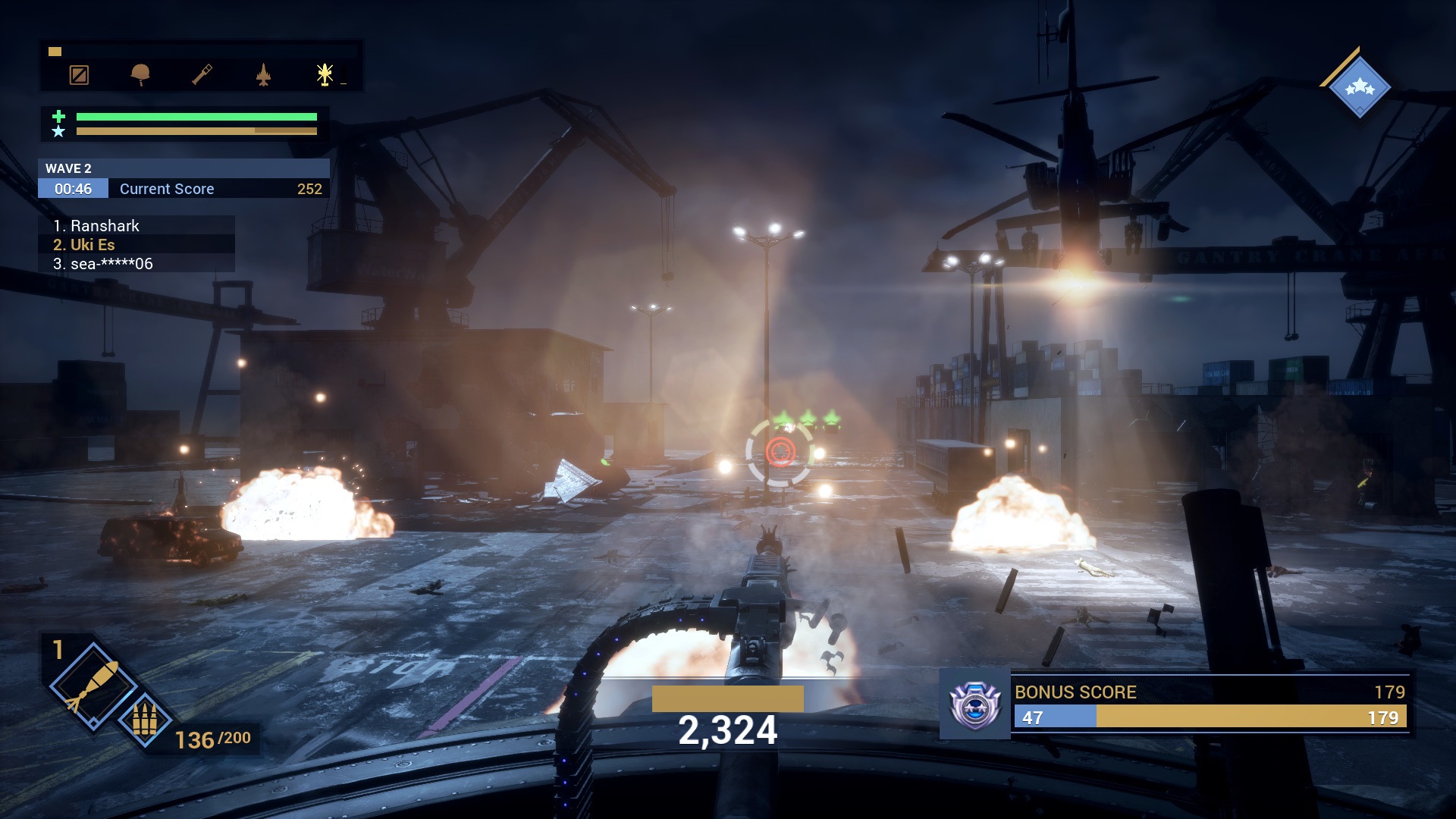 The more minor of these problems comes in the from of the graphics. While they are serviceable on a flatscreen monitor, this is a game charging a premium for VR access. In VR, the look is headache inducing. No longer are the enemies nondescript soldiers, but mudmen from the depths of a tractor pull outhouse. The screen tearing begins to mess with the eyes and shots that need to be aimed close and low are much more difficult to hit. This is after recalibrating a few times to get the HUD to pop into place. Plus, the game requires the player to physically turn around, something that can throw the PlayStation VR’s calibration out of wack. Obviously, Vive users won’t have this issue.

The real kick in the teeth is a bug around enemy spawning. Playing through the campaign, there were a few times where there was one last enemy hiding out somewhere. Since the next wave won’t start until the last foe is wiped, this can lead to periods of waiting until the pathfinding works itself out or one of the infantry that was spawned using a perk meanders over and finishes off the poor sod. It kills the pacing. During the end of the third wave after the final checkpoint, however, it’s possible to get well and truly stuck because of this. There would be an indicator for the direction, but it wouldn’t come out. The front of buildings were torn down, fully-upgraded rockets launched, and those troops would wander over, peer around, and look back as though to say “I don’t know, boss.” This happened a few times in the same spot. Finally, on my last attempt at restarting, the wave proceeded as normal. Based on what showed up, it seems that one of the kamikaze family sedans that are introduced during the final portion got stuck on some geometry behind one of the buildings during the previous attempts. My theory is that the driver was distracted by some misbehaving children in the backseat (“If you kids don’t knock it off, I will turn this car around and then nobody gets to explode!”). 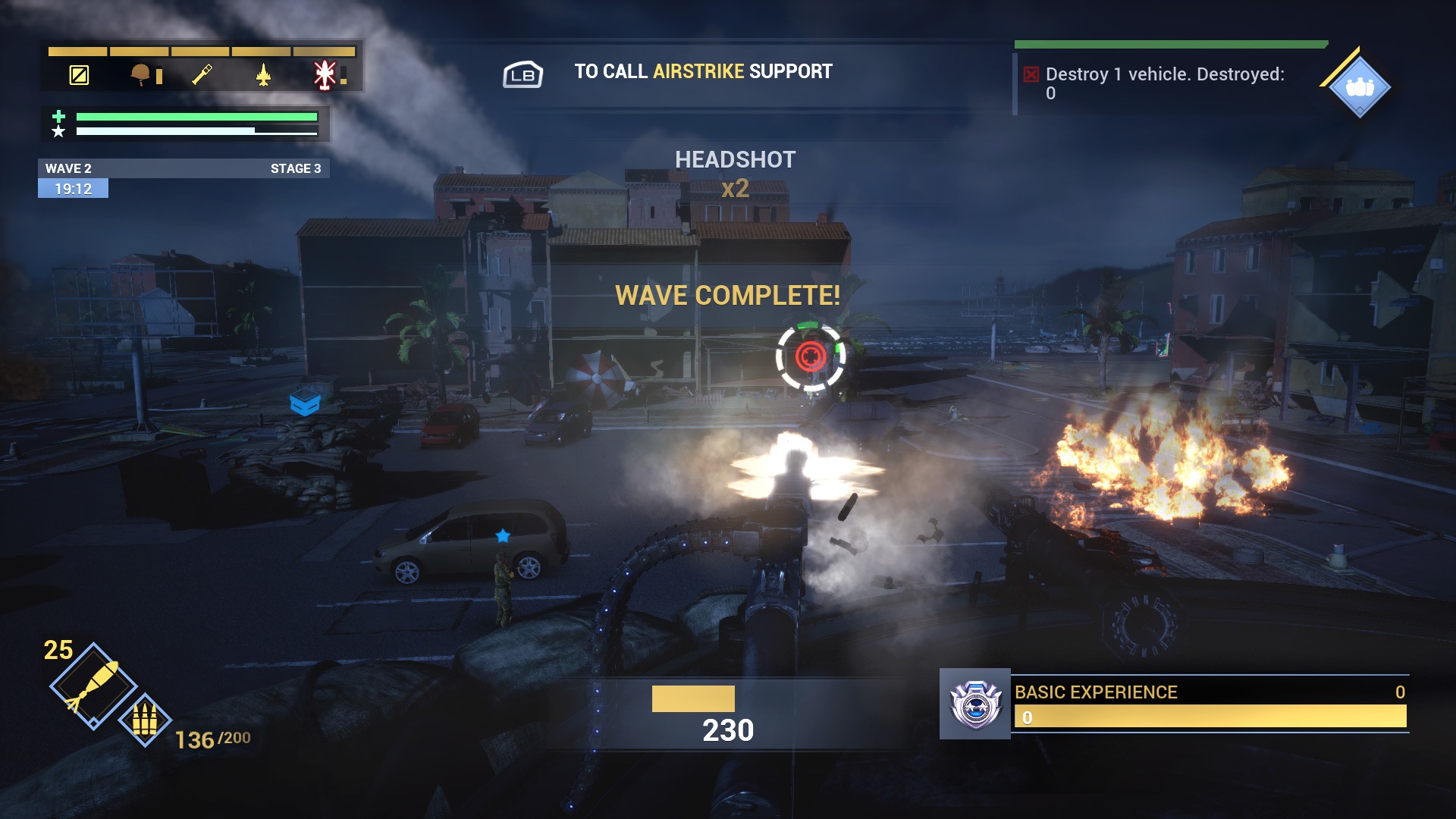 The experience of playing this title is one of roller coaster highs and lows. At first, it seems like the new bad game everybody should check out. It’s so gormless in its stupidity that it’s endearing. Through extended play, those scales drop from the eyes and the blissful ironic joy gives way to tedium as the player prays to their deity of choice that they don’t run into a bug that renders the scenario unwinnable. With fixes to the pathfinding and spawning, Heavy Fire: Red Shadow would be an honest to goodness hilarious arcade style classic, intentionally or not. As it stands, only the most patient should climb behind the gun.