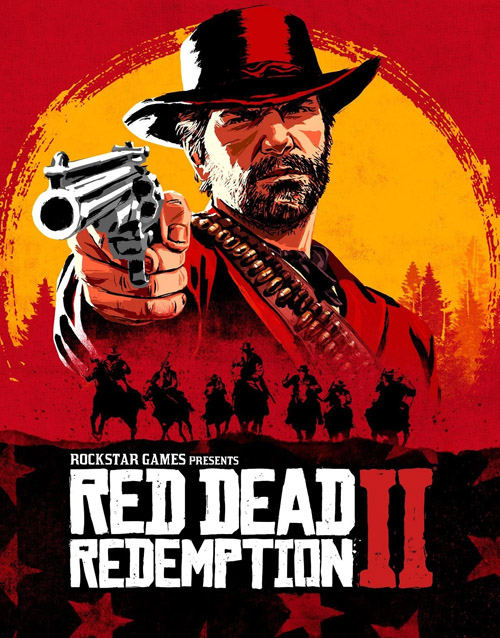 When you think of Rockstar Games, Grand Theft Auto is no doubt the first thing that pops into mind. They’ve built a multi-billionaire dollar franchise that has become a household name, but they’re a multi-studio company that has many properties in their catalogue. Midnight Club, Smuggler’s Run, Max Payne, State of Emergency, Bully and so many more, Rockstar is far more than just Grand Theft Auto. With that said, their third-person action adventure formula has worked for them in the past and so they’ve been implementing it into other titles, one for example would be Red Dead Redemption. Released over eight years ago, we dove into the Wild West like we’ve never done so before, with an open world ripe for exploration, a compelling story with a loveable cast of characters and a cleverly-designed shooting mechanic. Here we are again, as Rockstar has created a more colossal and immersive game that puts it in a familiar territory, all while making feel like its own identity.

Don’t be deceived by the number at the end of the title, Red Dead Redemption 2 is a direct prequel to its predecessor. The story takes place years before our last adventure as we follow Arthur Morgan and the Van der Linde gang. If you recognize the latter name, it was the group of outlaws that John Marston rode with back in the day. As you can expect, you’ll see our loveable Marston often, who is perfectly implemented into the story. It’s not too much fan service or focus, but just enough so he’s a solid supporting role, especially in the later half of the campaign. He has his own arc, but it’s all about Arthur and his issues. The first couple of chapters in the story, Arthur is an unlikable individual. It takes him a little while to find his footing as he’s an overly serious character who never breaks a smile and plays the rough cowboy to a T. His relationship with the group, including the gang’s leader, Dutch van der Linde, is what stands out among everything else. It’s the little things around the camp; the songs, the gestures and the interactions that expand our protagonist’s likability, and you begin to better understand him. Even the most insignificant faces seem to bring out the more positive aspects out of Arthur more than the main story ever does, and it’s sad that it’s something players can completely overlook, especially considering entering the camp setting forces the player to move at a snail’s pace. 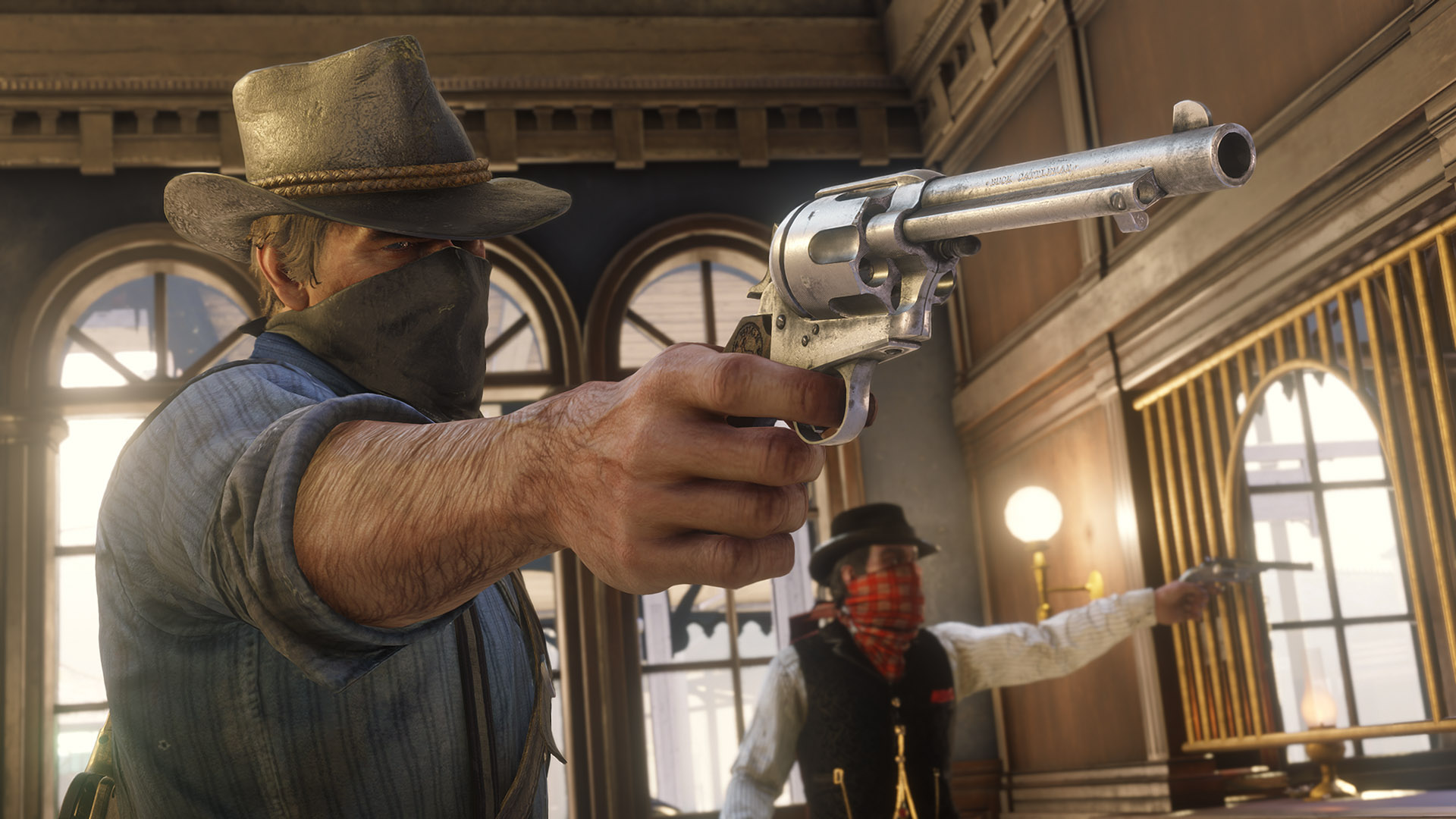 As for the main story, it’s entertaining but far from revolutionary. It has its highs and lows, the lows being the lack of development outside anyone who’s within the Van der Linde gang. You get to meet a plethora of characters through Arthur’s journey and yet most of them only appear in one or two missions, outside of a couple of exceptions. Red Dead Redemptions 2 moves at an incredible pace to the point that most people in the world are disposable and sometimes unnecessary, making me wish there was more of a focus on specific story beats as it’s spread too thin in spots. With that said, outside of the phenomenal core cast, what Rockstar does right is create exciting scenarios. This is something the company is known for, crafting well-designed and often comical heists that are sure to go awry. Whether it’s robbing a train or a stagecoach, or simply walking through town, each chapter has a handful of standout missions that will keep you on the edge of your seat. Granted, the other missions are mostly broken up into your standard affairs, but at least they’re kept lively thanks to Arthur generally being assisted by another member of the gang.

Red Dead Redemption 2 is a long game and there’s a lot to do in it. The main campaign alone, along with a good number of Stranger missions, took us just under fifty hours to complete, which is exponentially longer than its predecessor. That’s barely even participating in the various other activities, such as hunting, gambling, bounty hunting and more. The Stranger missions are one of the bigger draws as they are once again whacky, over-the-top scenarios that fill out the world. Arthur may not have the sarcastic, comical timing of John Marston, but he still lends to each situation with his confusion. Sadly, I never saw a damsel tied up on a railroad track that needed saving. Speaking of Stranger missions, you’re also able to make choices that may affect scenes in the main story. For example, I met one woman earlier in the campaign and she appeared as a prostitute later on, which lead to a bounty immediately put on my head. Another was a surprisingly lengthy scene with a nun who I randomly bumped into once, and Arthur opened up to her. Your choices through the campaign do hold some weight as they can affect where specific people end up in the future and might even expand upon Arthur’s character more. 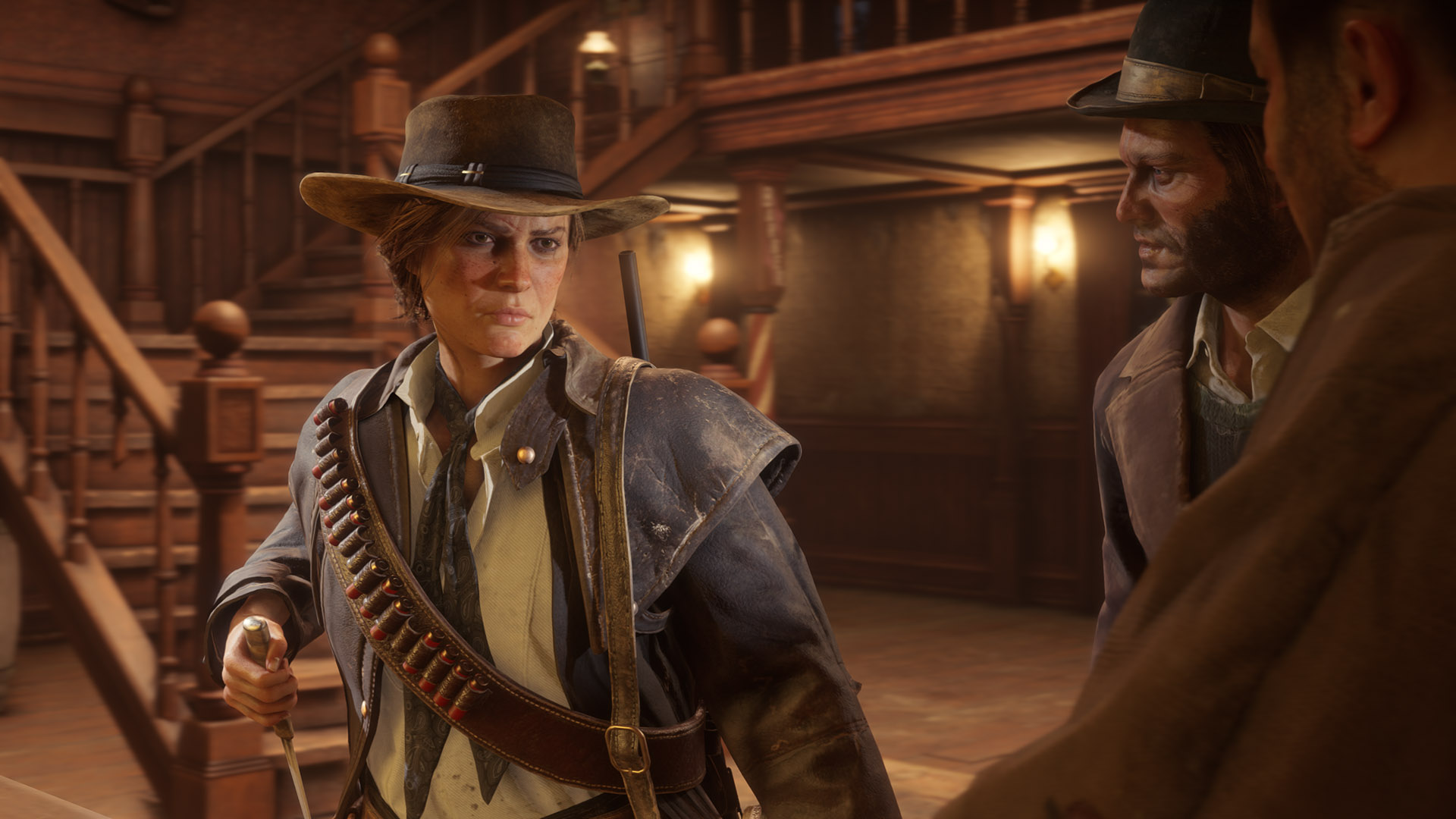 Outside of that, Rockstar has created an engaging system that allows you to rob shops, stagecoaches and even trains full of people at any time. All you need to do is put on mask (if you don’t want to get caught) and start demanding the goods. If you do most of the story, you won’t need to do this all that often as you’ll be rolling in dough, but it’s a fun way to de-stress. The Wanted system is also back, as the more heinous of crimes you commit and people witness, the higher the bounty is put on your head. You can change your disguise or grow your hair and facial hair out to avoid being recognized, but you’ll probably want to pay it off the fee to avoid bounty hunters coming at you in the wild. Alternatively, if you catch up to a witness, you can threaten them, or if a police officer sees it taking place, you can defuse the situation if it’s not too damaging of a crime. Occasionally it can be a confusing why you’re immediately pinpointed as the perpetrator, though, as we’ve had a number of instances where we killed someone, a pedestrian comes across the body while we’re nowhere to be found, and yet a bounty is set on our character. Overall, though, the system works fine and can even be entertaining to chase witnesses down as they plead for their lives.

Unfortunately, one key component to Red Dead Redemption 2 I have difficulty getting into is the controls. The controls are similar to the typical Rockstar open world formula (at least Grand Theft Auto and Red Dead Redemption), with a thousand different actions being assigned to a handful of buttons. This is a mechanical marvel with all the different systems at play, from gunplay, horseback riding, hand-to-hand combat, character interactions and so forth. Controlling Arthur feels loose and stiff at the same time, something I can never put my finger on, and I have a difficult time determining if it’s a good or bad thing. Sometimes it can be frustrating, while other times it can lend to the charm of the game. The gunplay is still top notch, though, with each of the old rifles, pistols and shotguns feeling authentic and enjoyable to fire, especially with the Dead Eye skill. There are a ton of different weapons to obtain, all of which are need to be properly maintained, which somewhat ties into the survival aspect of the game, such as maintaining food intake for both you and your horse. 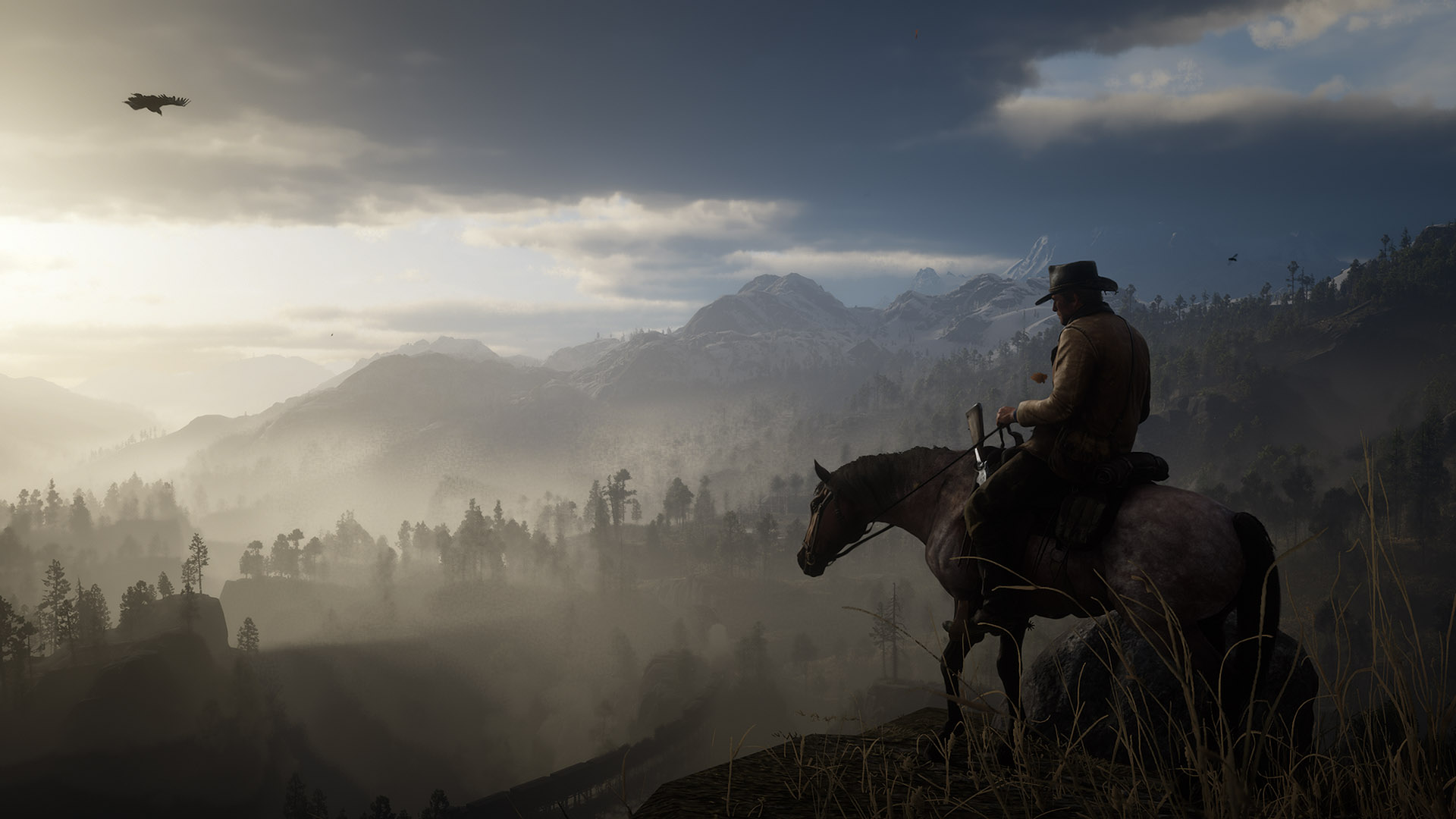 Getting back on topic, the problem with the controls is that they can be overly finicky. For example, mounting your horse and strangling a nearby pedestrian are assigned to the same button for whatever reason. Same goes with interacting with an item on the ground and say vaulting over a railing to your death. Throwing dynamite while in cover can also be hazardous as more than often it found itself on the cover in front of us. In addition, dealing with a horse is the biggest pain in the ass than anything else in video games and Red Dead Redemption 2 is no exception. The difference between this and Grand Theft Auto is that your vehicle won’t run away when it hears gunfire, ensuring you fail a mission when you need him. The physics can be a little wonky, too, as we had multiple instances where the horse could easily make a small dip or go over a rock, but instead decided to trip over its own feet, dying in the process once in a while. We even had an instance where it ran into another rider while in the cinematic camera angle (which allows you to put the controller down as the horse gallops to a set destination), something the recipient of the crash was not too happy about. Finally, I don’t know who thought it was a good idea to assign the run button (tapping X) to the horse, but there has to be a better way. As you can see, I’m not a big fan of horses in video games, as it consistently feels like you’re fighting with them, which doesn’t help with the already finicky controls.

It’s safe to say that Red Dead Redemption 2 is easily the most visually-impressive game Rockstar has ever created. While it’s difficult for open world games to compare to more linear, focused experiences due to the amount of content shoved onto screen at once, there were times when I thought I was playing a CG movie. Maybe that’s a little bit of hyperbole as there are still some compromises that are taken, but for the most part this is arguably the best looking game of the year. Character models are remarkably detailed, even with the most insignificant individuals, and the open world is absolutely gorgeous. Not only does it have an incredible amount of variety, from industrial cities to snowy mountains, but the way settings are organized bring the world to life in a sensational way. From a pure visual aspect, the only negative notions are minor ones, namely beards can sometimes look like they’re pulled off a character creator, and the rendering and reflections when moving through water has a strange issue on the sides of the screen. Animation is the only other aspect that can be bothersome at times. Don’t get me wrong, everything is animated meticulous, from faces to actions, but when you need to interact with something in the world, it can put you into an animation that takes a lot longer than you’d hope for. Other than that, I was blown away with what Rockstar was able to accomplish, as the world of Red Dead Redemption 2 is simply breathtaking. 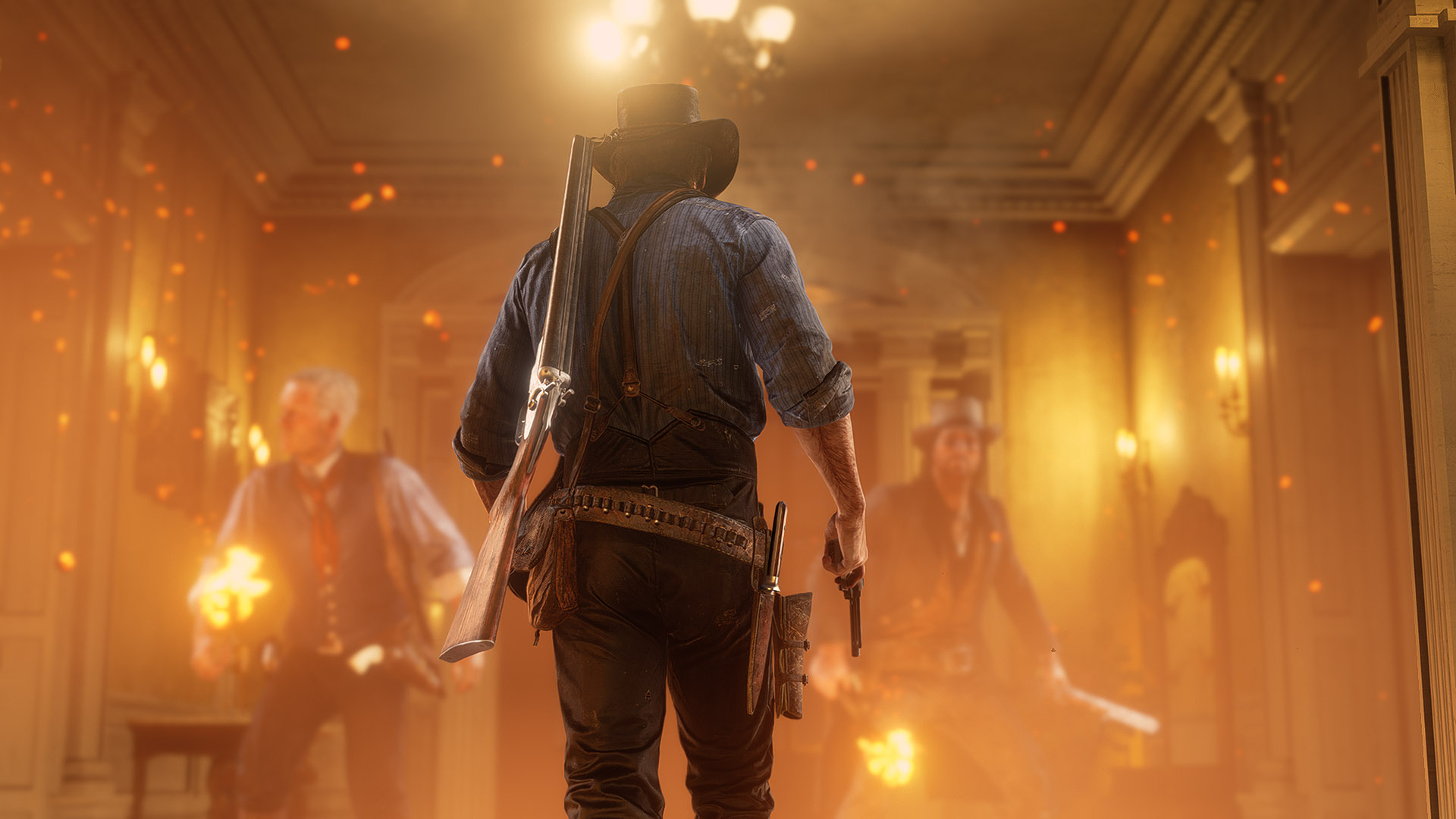 Throughout this review, I may have seemed a little hard on Red Dead Redemption 2, but the overall package is nothing short of spectacular. It has its share of issues involving controls, but the vast majority of the experience is unforgettable. Rockstar has created the single most immersive Wild West game yet, with an intelligently-written story, a compelling core cast of characters, highly-engaging scenarios and a diverse open world to explore. The visuals are also truly stunning, with a substantial amount of detail put into each environment and character model, not to mention the extraordinary lighting techniques. The world is just ripe for exploration; it may not be the densest place out there, and I do wish there was a larger emphasis on hunting, but there’s still a ton to see and do. With around fifty hours to complete the main campaign, and even more if you do all of the other side activities, a game such as Red Dead Redemption 2 doesn’t come around this often. All I can say is wow.