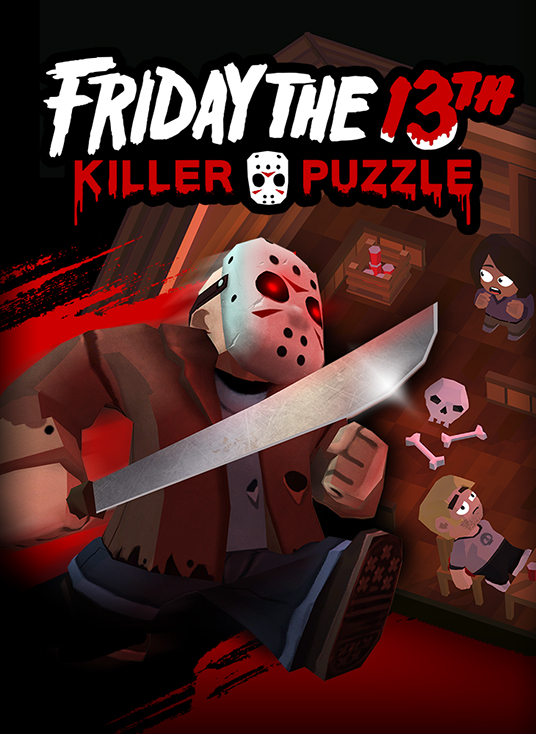 Say what you will about Jason Voorhees, he’s a man who loves his work. He’s exhibited dedication, focus and creativity towards a single task over the course of decades, and that’s not the kind of thing one expects from an indifferent craftsman. Jason is a passionate master of his life’s focus, it’s just that that focus is killing people. Usually this is a straightforward matter of stalking someone and then enacting a grisly murder, but in Friday the 13th: Killer Puzzle it’s all about the sliding block puzzles.

Friday the 13th: Killer Puzzle is basically Slayaway Camp 2: Officially Licensed Edition. The gameplay is identical in every way, but seeing as that game was a gorily creative slasher/puzzle-fest, it works out just fine. The teen victims of Jason’s rampage and the environments look much nicer than Slayaway Camp thanks to a significant art upgrade and there’s a whole arsenal of new weapons to tear through them with, but you’ll need to break out the brainpower to see all the content in its full bloody glory.

The basic setup is simple: the campers stand still on a checkerboard grid and you slide Jason around the room to eliminate them one by one. When you send Jason sliding he moves until hitting something, whether that be a wall, furniture, unfortunate camper or fatal hazard. Jason can’t swim but if he slides towards the end of a dock he’s going straight off the end, because videogame logic is the best logic. Once you’ve killed everyone on the board a final camper shows up on the X spot, triggering a simple timing-based minigame for a cinematic murder assuming you’ve left Jason in a position to get there. Then it’s on to the next level, and the next and the next and the next, through over 150 puzzles that keep adding new elements to make killing obnoxious teens trickier through all of Jason’s incarnations. 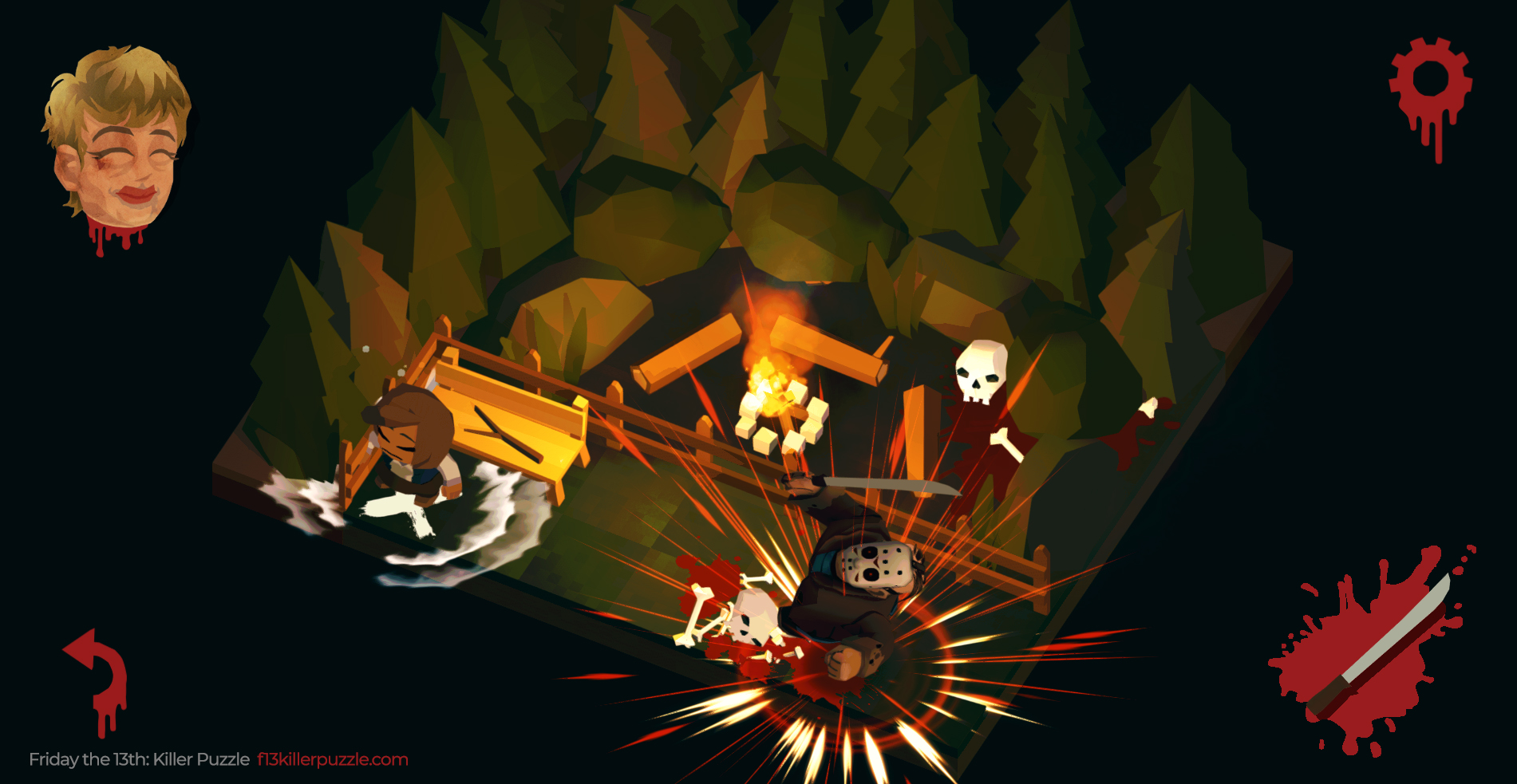 One of the first wrinkles introduced is the campers’ reactions. While for the most part they stand still on their squares, they will run in fear with the right provocation. A giant hulking murder-beast standing on the square beside them is good reason to flee in the opposite direction, as is the sudden grisly death of a camper on an adjoining square. Seeing as Jason has no brakes, it’s easy for a victim to escape its fate by being on a tile he can no longer access, standing there safe as you orbit around them searching for a path that’s no longer there, but by carefully shepherding the campers into position you can take them out in a bloody chain of carnage. Slide next to one person, send them screaming right into a campfire and instant immolation, which sends the one standing by the fire straight into the lake. And then things get complicated.

Phones on a level are connected, so sliding into a red phone causes the other red phone to ring, which brings anyone with a clear line of access running straight towards it. Cats, on the other hand, are scared of phones and run away, plus sliding into a cat kills it and immediately results in level failure. Wall switches turn off the lights so you can kill without scaring anyone and darkness means you can take out the super-powerful SWAT members if you approach them from side or back. The laser sight on their rifles lights up a serial killer no matter how dark the room, however, and their body armor lets them get a shot in unless taken by surprise. Regular police are more common and easier to deal with, but even they get to take out Jason when he stops in their view. And then there’s the teleporters, electrified walls, half-walls that Jason can’t kill over but give enough visibility to let victims know it’s time to run away, mines that a terrified victim will run over to clear it out of Jason’s way, etc.

Taken all together it could be a lot to keep track of but, with so many levels to play the variables are slowly integrated into the whole until it seems the most logical thing in the world to untangle a path to the slaughter. Not at first, of course, because each new level can seem like a chaotic mass of goals and obstacles, but after a few failures a course starts to take shape. At any point in a level, whether death, dead end or just rethinking a strategy, you can hit the Back button to undo a move all the way to the starting point. After one Back you get the option to completely restart the level, saving a whole lot of rewinding if things got completely messed up. Normal level progression then becomes try a thing, then try a thing again to see why it didn’t work. Try a thing a third time with slight variance just in case it’s an easy fix. Start to understand that if this goes Here and that goes There then all you need to do is chase this victim Elsewhere to create a path to the exit. Except that doesn’t take into account (random obstacle) but there’s a way around that too. While the trappings are bloody and violent the actual gameplay is pure puzzley goodness, programming variables to make them act as intended even if they do tend to scream when coded properly. 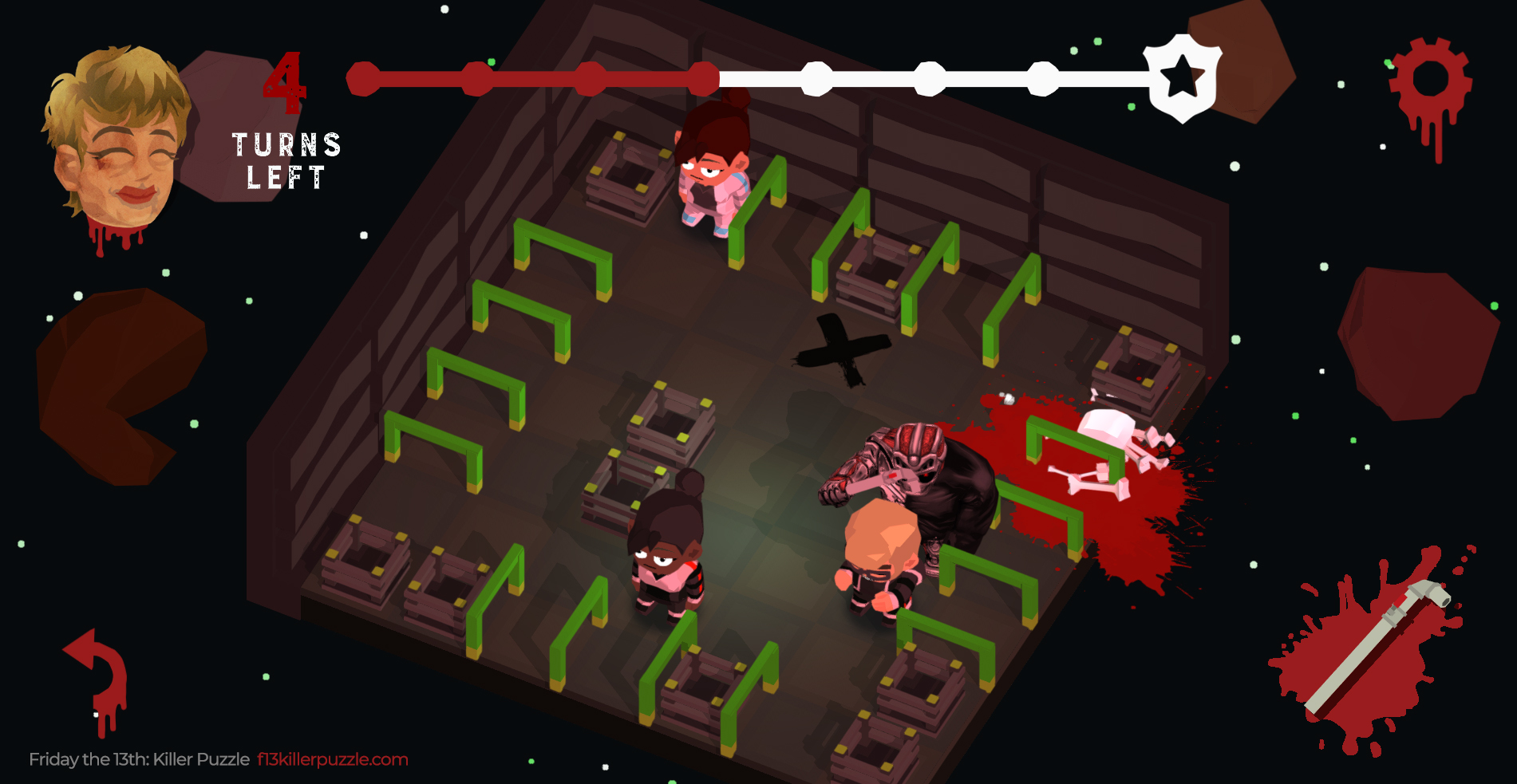 Friday the 13th: Killer Puzzle could be viewed as a reskin of Slayaway Camp, which would be a problem if Slayaway Camp wasn’t such a great puzzle game, but honestly more of the same is welcome. The all-new puzzles and the path to their solutions are always satisfying to figure out. I’ll admit that the sadism of a few kill-animations is a bit harsh for my personal tastes, but there’s a toggle to drop the rating down to PG-13 I purposefully ignored, so that’s on me. The huge arsenal of weapons to unlock ranging from practical (scythe, baseball bat, fishing spear) to ridiculous (garden gnome, barbecue fork with a wiener stuck on the tines), plus endless Daily Challenges give you something to come back to even after clearing the giant main collection of levels. From Camp Crystal Lake to prison, a series-appropriate too-long boat ride to New York City, off into the depths of space and then home again, Jason pursues his love of killing wherever he may find himself no matter how clever the obstacle course in his way may be.