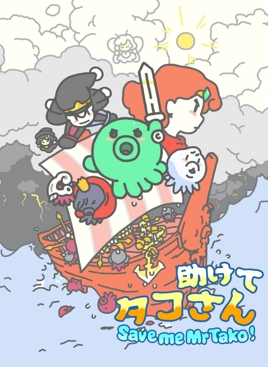 Save Me Mr Tako!

One of the most popular indie styles in most recent years are those that go back to the old school pixel art. Save Me Mr Tako! is no different in that regard, but instead of basing itself loosely on entries from the NES or SNES eras, it goes for the handheld look that players saw when they picked up their Game Boy. Since its reveal, Save Me Mr Tako! began to gain interest from those looking into a more retro-inspired time, but the real question is does it hold to it as well as it seems?

The story begins aboard a ship that is being overrun with octopuses. These octopus soldiers take down all the humans aboard the vessel, until the meet face to face with the princess the human soldiers had been guarding at the edge of the boat. Just as she is thrust into the water, one sole octopus bursts free of his armor and leaps in after to carry her back to land. This world that humans and octopus share is one of war, and where once the octopuses ruled supreme the humans have taken over and pushed them back into the ocean. While most wish to fight back and take the humans down, a sole octopus by the name of Tako sees them in a bit of a different light. After having saved a human, Tako gets shunned by the others for his decision going against his brother Bako. In order to try and prove that humans aren’t as bad as they seem, Tako seeks to travel and stop his brother from waging war on land with the help of a fairy who grants him the power to breathe on land with the promise that he will never come to hate humans.

The basic gameplay of Mr Tako is level based, allowing the little octopus to explore a safe open area between levels to replay at any time once beaten. Tako is an octopus with many talents, with his key one being the ability to shoot ink. This is the main mechanic players encounter as they first begin exploring levels. Tako’s ink is capable of freezing enemies in place, allowing them to be used as temporary platforms. The catch is that Tako has a limited amount of ink, but can be refilled with various ink drops found throughout levels. If Tako completely uses up his ink, it takes a little while for it to recharge making it worthwhile to not just aimlessly use his abilities. While in many instances he is able to simple navigate around enemies, this is often necessary or frequently needed in order to access otherwise out-of-reach areas that contain secrets. Along the way Tako will receive all manner of unique alternate abilities, granted to him by the hat he wears. These hats also typically act as a second hit, as normally Tako can only take a single hit from an enemy before restarting from the last checkpoint. The difficulty can seem a bit hard at first because of this, but it ends up fairly balanced when considering there’s no time limit on stages making it feel like the best plan of attack is to safely explore by taking it slow at times. 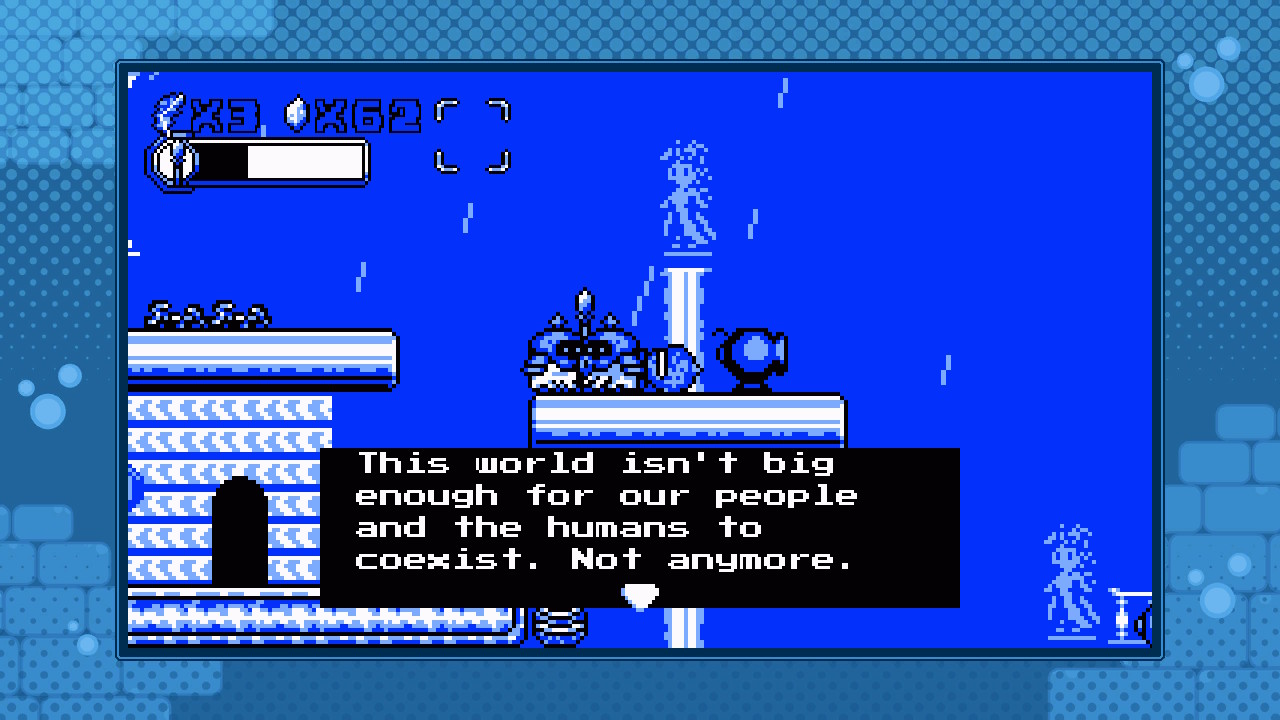 The core levels are much like any other platformer, with Tako’s goal to reach the ending door to lead him out. These levels are incredibly well designed, with secrets hidden in great places that makes it worth replaying if every one isn’t found. Fortunately the levels even signify if not everything has been found, by putting a star for full completion and a simple check mark for having just finished the level. Many levels do also include checkpoints, where Tako can pick up one hat to help on his perilous journey before continuing on his way. Outside of the regular levels there are dungeons that puts Tako through a puzzle-solving trial. Progress through these can be difficult but satisfying to solve everything along the way, with most dungeons leading to a specific hat that Tako must use to finish it. This includes a boss at the end, which Tako must overcome. Many of these bosses aren’t difficult in concept, but as Tako can only take one hit it makes being careful especially important. Perhaps the only unfair aspect of these bosses is occasionally upon respawning, Tako will lose a life again almost immediately if the boss happens to be right on top of where he appears. One of the more forgiving elements for the longer levels besides checkpoints is many offer warps at the beginning if Tako loses all of his lives to a game over. This makes it less frustrating when players happen to get far but lose all their lives and quite forgiving overall.

Aside from the typical levels and dungeons, Mr Tako is filled with a good number of towns and side areas to explore which don’t include enemies but instead normal villagers. This is where Tako will receive many of his side quests and alternate hats, and often dive further into the lore there is to offer. Completing these side quests can be anything from fetch quests, talking to other people or often completing a special stage that appears for it. It makes it worth talking to villagers multiple times throughout to see who has a quest so Tako can begin his journey towards collecting all fifty of the available hats. Although Tako may be the headliner for this title, players will occasionally take control of others as the story progresses. These are unique instances in which players will control either another octopus or often human characters. Most come with their own skills, which is a wonderful change of pace that leads to new difficulties and challenges. While most have weapons, some will come unequipped and have to dodge enemies instead of face them head on. 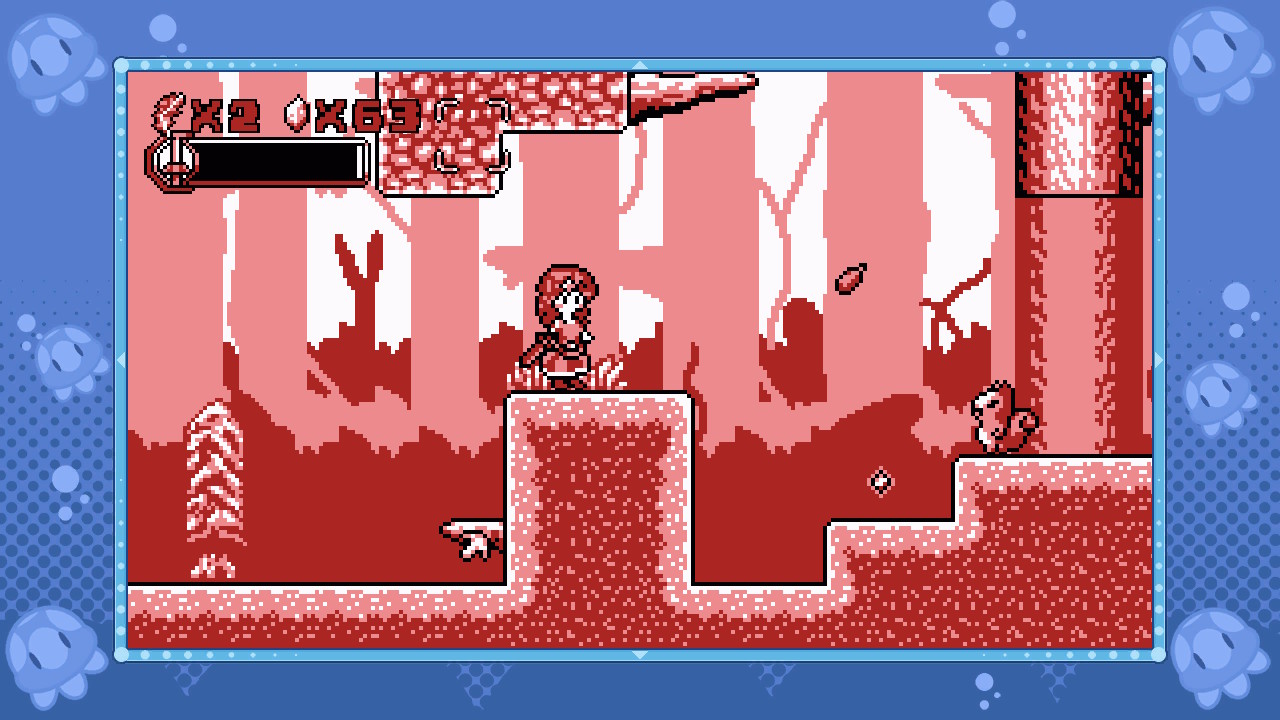 While Mr Tako has a lot of strengths, one of the most surprising is the story itself. The simple idea of an octopus that stands up to protect humans without completely opposing his own kind is such a unique premise, but the depth it dives to is simply astonishing. Each NPC offers so much information to keep one wanting to learn even more and certain areas even offer a chance for Tako to see things that happened in the past to understand a character’s reasoning even more. It’s creative, wonderful and even dark at times but works so shockingly well alongside the full Game Boy presentation.

It’s not often that an indie title so perfectly replicates a retro style, but Mr Tako nails. From the visuals to the sound design, it feels just like the classic gameplay on the original Game Boy. The soundtrack is catchy, with each area having such well-made themes that standing around listening to them becomes almost a norm. There are a lot of options on how to change the visuals as well. The starting menu allows for screen size adjustment, in addition to changing the screen color or add a background. The screen color and background can also be changed at any time during gameplay, so those who feel like mixing it up or want the colors that are easiest on their eyes can mix it up whenever necessary. There are a lot of games that aim for the retro appeal in looks alone, but Mr Tako feels as though it wants to be played on a small square screen under the blankets with a flashlight late at night. 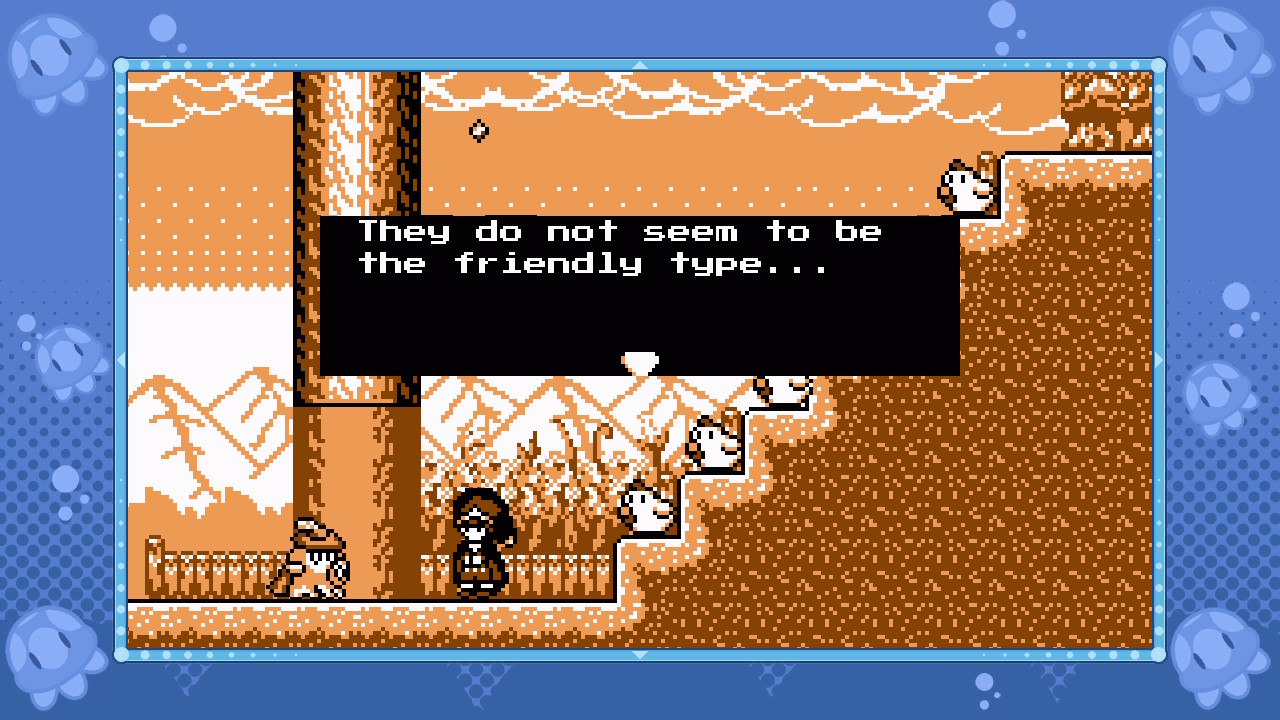 There’s so much about Mr Tako that shines that even the few bits that are difficult or feel unfair can be easily overcome by just taking that part a little slower. Mr Tako isn’t just a love letter to many of the classic Game Boy titles in terms of looks and gameplay, but includes a well-written story and wonderful mechanics that make it easy to want to keep going and discover even more. It’s an amazing title that exceeds all expectations, and even during some of the more difficult sections is hard to put down for more than a few minutes. There isn’t a single recent title that comes to mind that truly captures what made retro titles great while also managing to be outstanding all by itself. Save Me Mr Tako! is a title that is for anyone who loves amazing platformers with a perfect balance of puzzles, combat, challenges and story.