Some things take longer than others, and a good case in point would be the physical release of Rabi-Ribi.  Initially revealed some time way back in mid-2016 this super-cute bunny-girl metroidvania took its own sweet time thanks to a long period of regular updates and getting final certification.  The long journey ends Friday with a release for both PS4 and Vita, although a slight disclaimer is in the works seeing as the print run is tiny.  The PS4 sees 2,500 copies while Vita gets 2,800, which is most likely due to the PS4 getting an unlimited physical release in Europe and Vita cartridges getting carefully rationed out due to the end of its life cycle.  While there’s no deluxe edition there will be a Rabi-Ribi Bunny Bundle, which is a collection of goodies from Sekai Games’ boxed PC release with the main draw being a 160 page art book.

The other release this week is also a big one in the form of Battle Chef Brigade, the beautifully-animated cooking action platformer tile-matching adventure that figures the more genres it stuffs into a single game the better.  The PS4 version is limited to 2,500 copies while the Switch is a two-week open pre-order, but both platforms also get a giant Brigadier Edition with one of the cooler extras packed in the box.  In addition to the standard CD soundtrack, poster, and steelbook case, the game also comes with a full-sized cooking apron with the Battle Chef Brigade logo printed in metallic ink.  It’s maybe a little fancy for standard kitchen use but absolutely perfect for when you need to turn a selection of monster parts into something particularly tasty.  The PS4 version of the Brigadier Edition comes in at 1,300 copies while the Switch gets 2,000.

It’s worth noting for Switch collectors that Battle Chef Brigade is most likely getting a Best Buy release, limited to 5,000 copies with an different cover from the one offered on Limited Run Games’ site.  The big-box retailer gets exactly the same ordering window as anyone else and the stock it buys is a one-time offer, no reprints.  The release is still as limited as any other, it’s just that there’s probably going to be a different version in decent supply out there.  It’s not 100% definite because the order isn’t finalized yet, so maybe it won’t happen but probably it will.  On the plus side, if you’re buying Battle Chef Brigade to play it doesn’t make much of a difference at all. 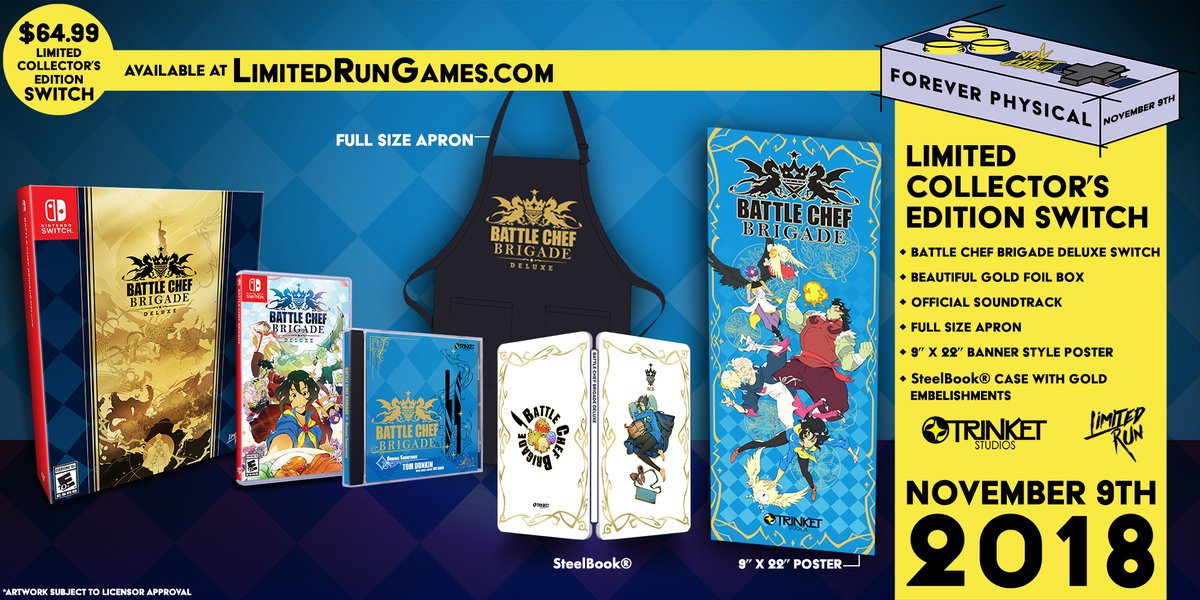