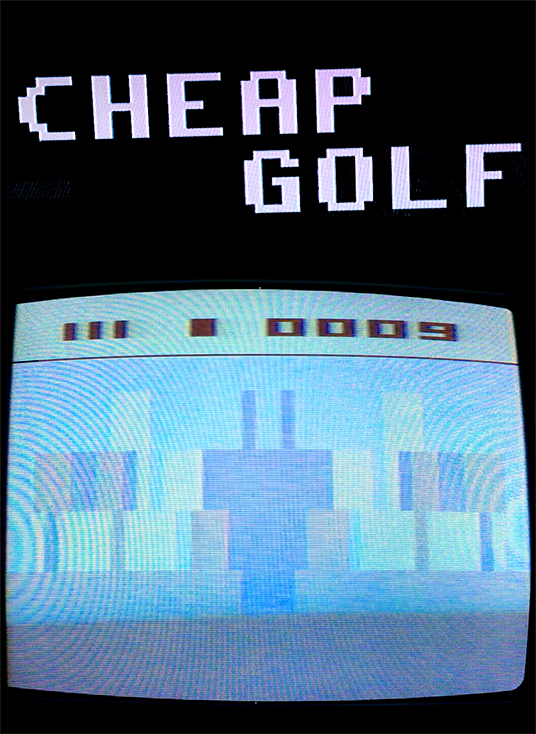 Retro comes in a number of styles ranging from hyper-neon arcade games to console-style throwbacks. Usually the imitated consoles are NES, SNES and Genesis, with PS1-style blocky 3D just beginning to come into style, but retro generally starts at 8-bit. This ignores an entire stretch of gaming history, though, with plenty of systems that had their own unique look for the games they hosted. None is more iconic than the Atari 2600, but the basic nature of its style means any game mining that era had better be simple. That doesn’t mean it can’t be clever, though, and Cheap Golf balances the simplicity of its single-screen minigolf gameplay with fun writing for an AI named Susan who is monitoring your mouse gestures for what’s bound to be a good reason.

It’s worth noting before going too far that Susan sounds like “she” could easily be another GlaDOS, so consider this a disclaimer that she’s not. She’s funny, a little weird and on a journey to becoming smugly omniscient, but in no way is she a clone. Not every AI needs to have an evil plan to crush humanity under its digital heel. It doesn’t make them any less amusingly arrogant, of course, and I’d happily pay good money to hear GLaDOS, Susan and SHODAN kvetch about humanity.

Susan’s journey starts off straightforwardly — by playing a game of minigolf, she gets input data on the user. The golf ball is actually just a square called a boop and sending it flying across the course is as simple as click, hold, drag, release. How far back you drag indicates how much force you use to send the boop flying and then it bounces around the screen until slowing to a stop, hopefully near the exit hole. The controls work nicely so long as you don’t have to move too quickly, because there’s a second shooting method involving a quick tap on the mouse to start the pull-back and then clicking again to let go, and it’s easy to trigger this by mistake when trying to make a fast shot.  Once you’ve got the ball to the hole under par you move on to the next level and that’s all there is to it. Other than insta-death red walls, moving obstacles, tricky corners, waves of force, teleporters, keys that open color-coded gates, sticky-walls, etc. There are over 140 levels divided up into three chapters and no one level is like another. 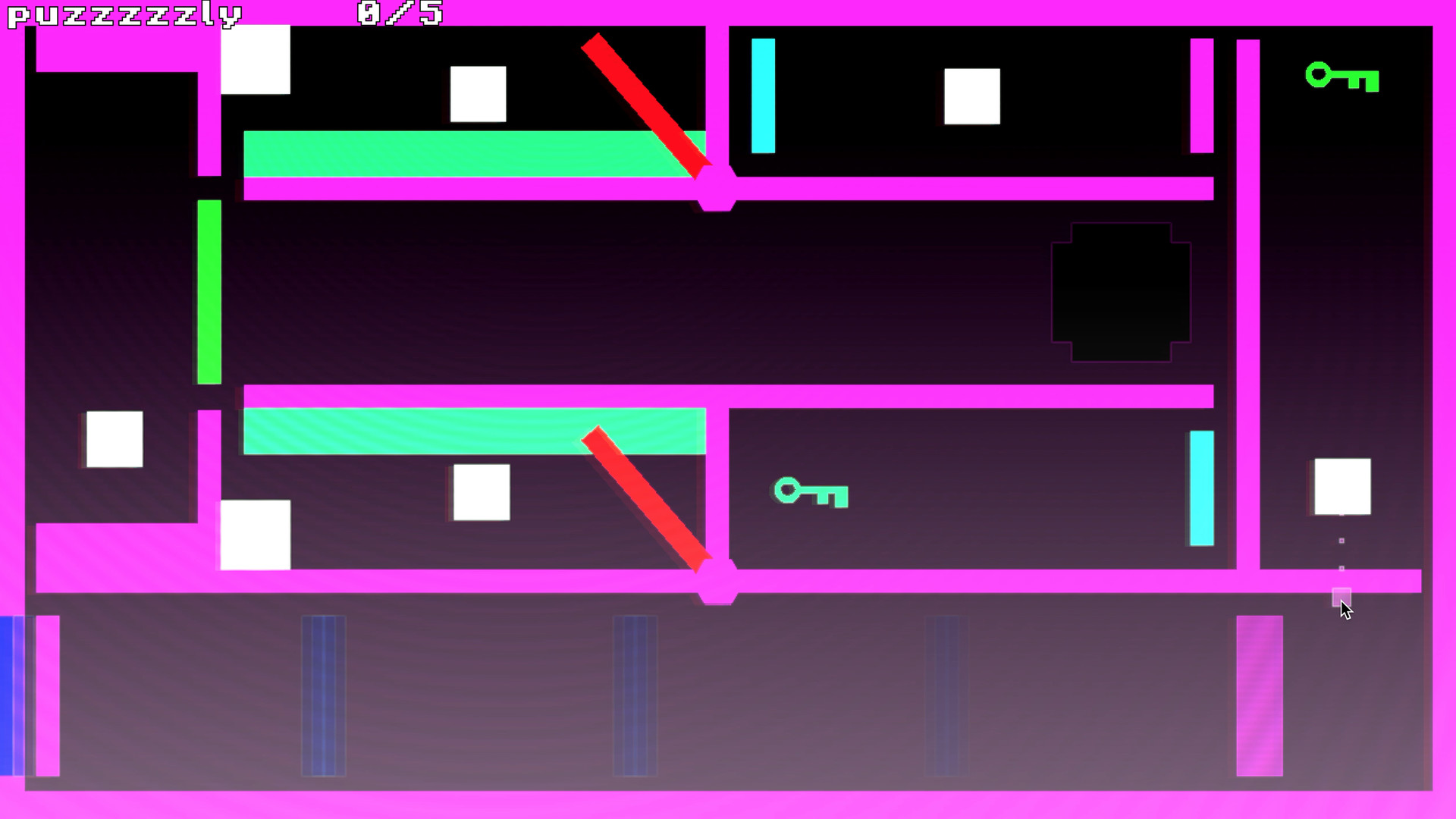 Level 1 is simple: ball goes into hole in a single shot unless you’re playing around testing the strength of the pull-back indicator to get a sense of calibration or deeply bad at aiming. Level 2 has corners. Level 3 introduces bouncy angles and after that all bets are off. The view is from straight overhead and you can fling the ball any direction you want, but in one level force waves from the top plus a few platforms turn the perspective on its side. Colored keys open corresponding walls, and when you introduce multiple boops and holes, it turns the course into a puzzle where you not only need to sort out the correct order but also leave the boops in a place where they won’t get hit by wandering red shapes of insta-doom.  At one point Susan gets tired of omniscience, gives herself a digital lobotomy and her backlog of tricky levels is replaced with a short string of silly non-challenges.  There’s no telling what will show up next, just that it’s not going to be much like what’s come before.

All of this is rendered in a style reminiscent of the Atari 2600 as seen on a slightly crap tube tv.  Not slavishly, of course, because there are nice, clean diagonals all over the place, but both the color palette and moire-pattern CRT filter are as mid-70s as humanly possible, with just a little bit of color-bleed to complete the illusion.  Every once in a while there’s an obstacle that’s gives away its polygonal nature, but for the most part everything looks like it’s made of ultra-simple flat shapes of color.  I’ve never shied away from admitting how much I disliked the Atari 2600 when I was young (I was an arcade rat and the ports were uniformly terrible) but Cheap Golf makes the look work thanks to how completely committed it is to the style without letting it limit the design. 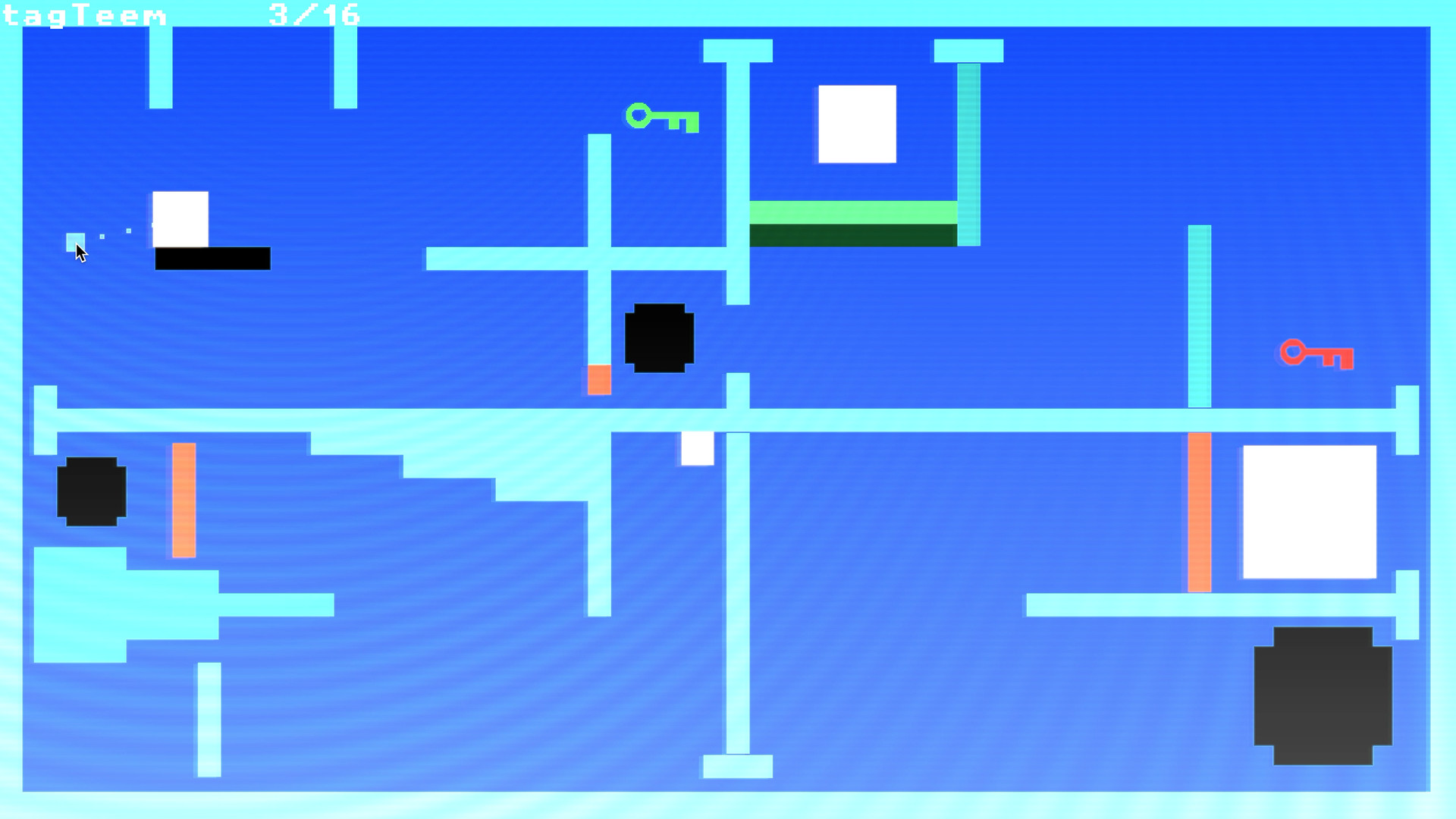 Cheap Golf is a far smarter game than its simplicity and retro style make it look.  While the bulk of your time will be spent flinging a white square around a convoluted screen, the bits between the levels with Susan are just as memorable, providing a far more entertainingly strange narrative than you’d expect from a game of minigolf.  The huge number of levels constantly switch up style and difficulty, making it easy to push on past a soul-crushingly brutal course due to the knowledge that the next one will at the very least be nothing like the current challenge.  It’s also worth noting that current plans call for a few new packs of levels to be added to the game later on, although seeing as they don’t exist yet that in no way affects this review.  What exists currently is more than enough to make Cheap Golf worth a play, helping an AI grow from its initial self-awareness thanks to the amazing instructive power of endlessly creative minigolf courses.