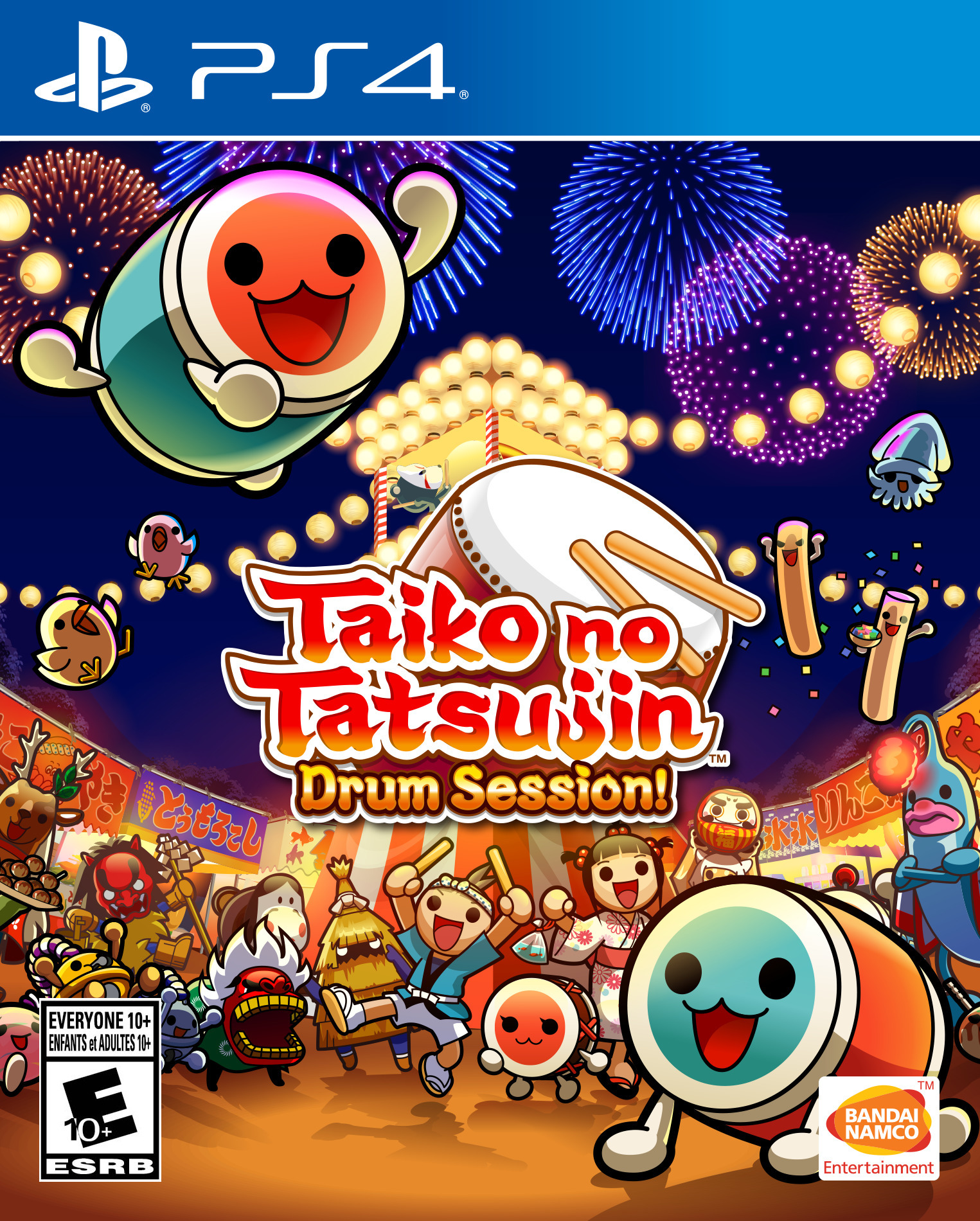 Taiko No Tatsujin has been a popular rhythm title for some time, but not for western players. This heavily Japanese title went from a hugely popular arcade experience to reaching home consoles in the early 2000s. The first, and previously only, western release was for the PS2 in 2004 and came bundled with a drum peripheral along side a heavily-western soundtrack. Many players criticized the lack of some of the more iconic Japanese music in the titles from anime and pop, but now Bandai Namco’s latest release has given a players a chance to experience Taiko like they wanted. So is Taiko No Tatsujin: Drum Session everything we wanted?

Like all rhythm titles, Taiko is all about timing a beat along side some winning musical selections. It’s extremely straightforward as well with only two buttons being required to play at any time. There are multiple options for controls which players can choose, but for the most part it will be either the buttons, d-pad or shoulder buttons. There are two main notes players will hit being the red Don and blue Ka. The Don hit is on the face of the drum, while the Ka is the rim which creates two different sounds. There are also large Don and Ka notes, which can be tapped with one or two buttons of the corresponding colors. Doing two at once will reward better points, akin to hitting both sides of the drum at the same time. There are also yellow drum roll notes which are longer and require hitting as many notes as possible, a balloon note which needs a certain amount of notes to be popped and a mallet which rewards lots of points for hitting its note requirement. The goal in each song is to raise the soul meter past the clear point, after which players will succeed in having beaten the song which will often result in rewards.

Each Taiko title has its own unique aspects, and in single player Drum Sessions has the bingo card. Upon finishing a song, a bingo card will be marked if certain requirements are met. These are fairly straightforward and include note count, score and often a perfect run. Each row of three earns a Don coin which can be used to purchase cosmetic items for the player’s taiko character. Customization allows the change of all three main Taiko colors and of course the ability to put unlocked costume parts. Some items will be unlocked through certain songs, but the majority will be through spending the in-game currency. While the looks don’t directly affect any ability the character has, it’s a nice way to dress them up and make them stand out. There are also voice lines that can be collected and is another way to change up how the character acts for when players take their Taiko skills online. 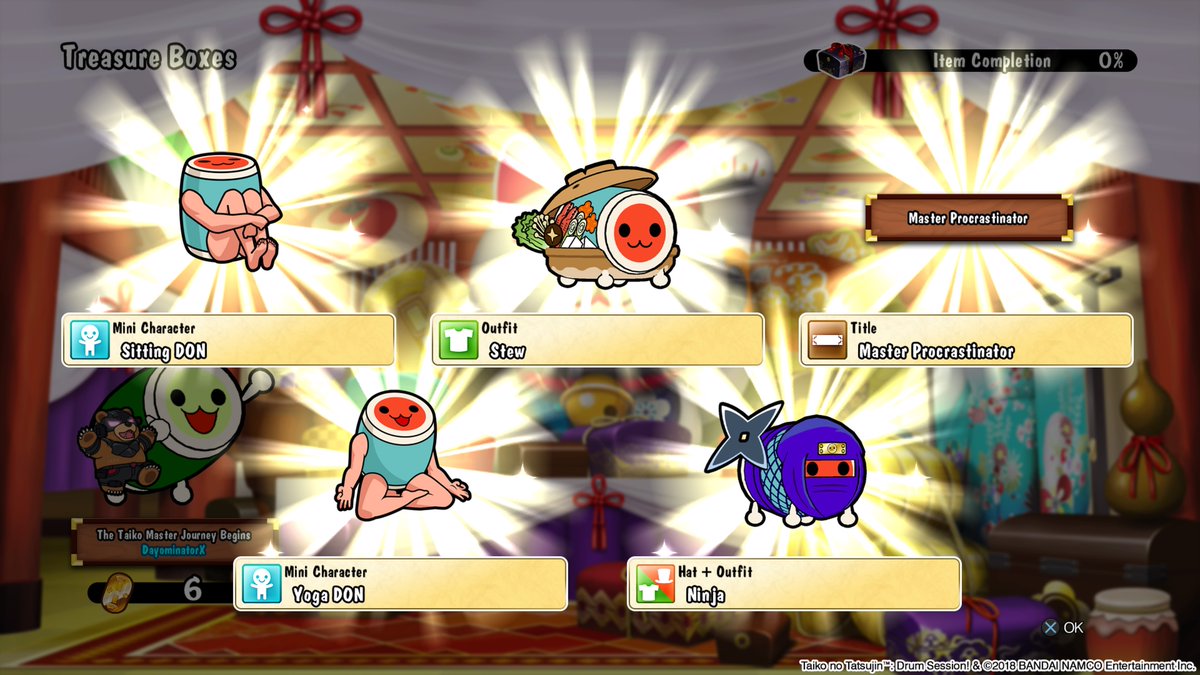 There’s a couple different forms of multiplayer that Taiko offers. The first is local, in which two players will go head to head and compete for the better score. The second is online, but it isn’t what might immediately come to mind. There is no direct confrontation requiring two players to drum at the same time and instead uses ghost data from songs for them to compete in ranked matches. After going head to head in face placement matches, players are given a rank to compete with. The highest being 99, lowest being 1. Players can improve their rank by winning in VS Matches or be potentially decreased if they lose. Fortunately players are put up against opponents at similar ranks, so it always feels well balanced. VS Matches are mainly there for a new type of challenge, but there are also limited-time events that players can take on for bonus items. Players can collect brand new gear by earning FP through winning matches, but for a limited time only. Fortunately this is all real time and is fairly generous allowing players to easily achieve collecting everything should they put in the time. It’s unknown right now if these limited time events will end up being repeated or are truly a one time experience, but for right now it gives even more incentive to go head to head against other players. It should also be noted that this mode is fully accessible regardless of access to the Playstation Plus service, due to not being a directly online feature.

If it wasn’t immediately apparent, Taiko No Tastujin is very much a Japanese-inspired title from its songs to the overall aesthetics. This includes the music lineup as well, which includes a myriad of songs from anime, j-pop, Bandai Namco originals and a variety of classic orchestral pieces. The music lineup has always been one of Taiko’s strongest features, one which was heavily criticized in the PS2 version due to the influx of western songs that replaced Japanese originals due to licensing issues. Fortunately this time around that is no longer a problem and players can enjoy a completely untouched assortment of music. Although there are also a few paid DLC songs, these are fortunately not listed among the main ones and don’t make it feel like they’re necessary to fully enjoy playing. 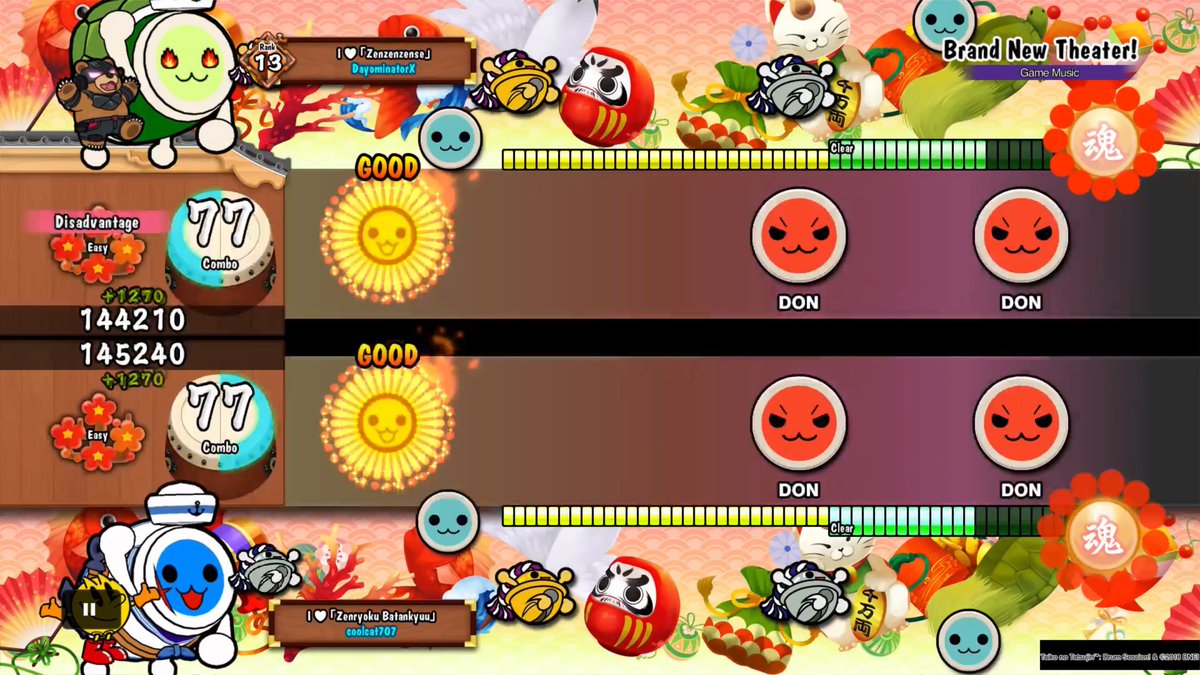 It’s wonderful to see Taiko No Tatsujin finally return to the west and perhaps in the most spectacular way yet. Some might see the paid DLC tracks as disappointing, but it makes sense given the expensive licenses needed for much of the music to be in Taiko. Like most rhythm titles the music selection may not appeal to everyone, but is still one of the greatest Japanese collaborations in a rhythm series to ever exist. There’s also something satisfying about hearing the sounds of drums playing along side the many musical tracks. Taiko is one of the greatest rhythm titles to ever exist, and although playing on a controller doesn’t quite replicate the true drumming feeling, Taiko No Tatsujin: Drum Session! is a masterful rhythm title that will hopefully continue to reach all fans for years to come.