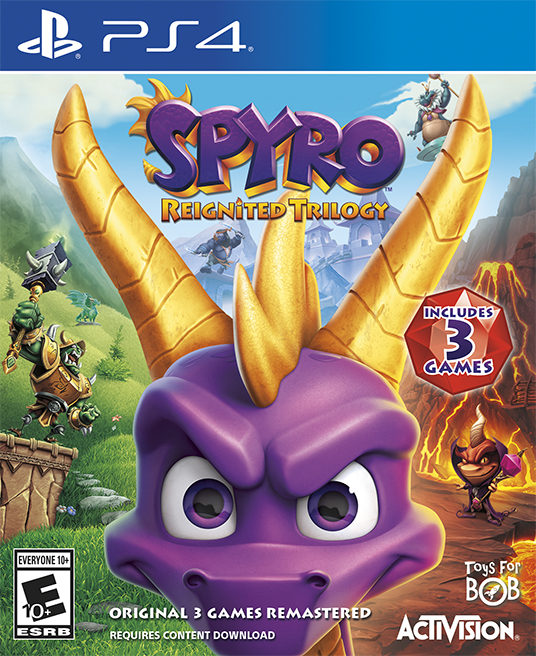 The late 90s/early 2000s were a weird time for gaming.  3D game design was finally getting nailed down, but even so developers’ ambitions were almost always greater than the available tech would allow.  Spyro the Dragon came out three years after Super Mario 64 had pointed the way forward for the mascot platformer, and while it missed a few tricks that are genre-standard nowadays the base game was a ton of fun.  Two more games followed with a year between each and then Insomniac went on to do other things.  The original Spyro trilogy sold consistently well through the lifespan of the PS1 and even long after the system was relegated to a neglected shelf or two at your local retailer, creating a generation of fans with fond memories of a favorite childhood series.  A few attempts were made to bring the series back but nothing ever took off, and eventually Spyro was left behind.  As of right now it’s a little over twenty years since Spyro the Dragon came out and that means it’s well past time for a remaster.  Spyro Reignited Trilogy gives the little purple dragon his due, completely reconstructing Spyro the Dragon, Spyro 2: Ripto’s Rage, and Spyro: Year of the Dragon with care and attention that in many ways goes above and beyond even the most optimistic expectations.

Short version-  Are you a long-time Spyro fan?  Looking for a combined concentrated dose of nostalgia and quality mascot platforming?  Spyro Reignited Trilogy has you covered.  The only thing necessary to translate these games from the late 90s to today was a good art update and analog stick camera controls, both of which are in place.  Everything else necessary was already there: fun characters, creative level design, solid controls, a nice variety of challenges that put Spyro’s abilities to a constant test, and an imaginative world to house it all.  Everything made the transition to 2018 intact, the bulk of it looking better than it’s got any right to.  This is the Spyro you remember and it’s a rare game (or set of games in this case) that holds up to being viewed without nostalgia-goggles. 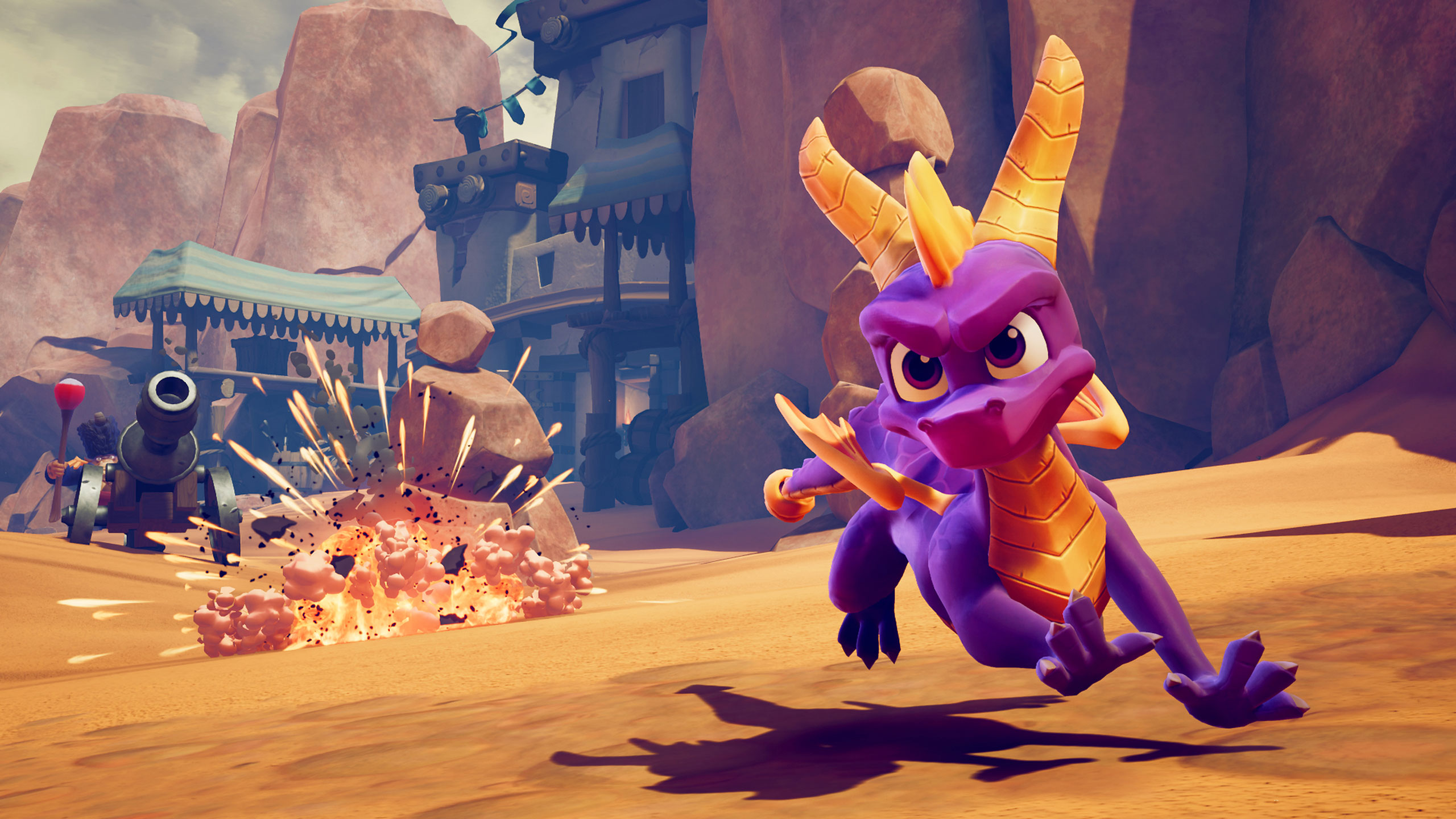 As for the longer version, Spyro is a little dragon who escaped being crystallized when Gnasty Gnorc took offense to being called ugly by one of the Dragon Clan elders.  As it turns out de-crystallizing a dragon is as simple as walking up to it, which is good seeing as Spyro isn’t old enough to have learned any kind of magic. His abilities are flame breath for shooting out a limited-range cone of fire, a charge move where he rams things with his horns, and a glide.  It’s a nice, basic set of moves that give Spyro the flexibility to meet any number of challenges head-on.  The ram move doubles as a galloping charge that lasts as long as you need it to, for example, and it chains nicely with the jump for a little extra distance when a platform might otherwise be out of reach.  Glide is nice but it’s not the same as flight, and Spyro is losing altitude as he goes, so he needs every possible advantage to get as much aerial distance as possible.  Overshooting is a lesser problem but one solved with the multi-purpose Action button, which is context-sensitive depending on what Spyro is doing.  Standing still turns it into the Look button, which isn’t quite a holdover from the PS1 days because it does let you see up or down a little farther than the right analog stick allows.  In the air, though, the Action button stops Spyro’s momentum, dropping him straight down in the first game but giving him a little extra height at the end of a glide before dropping down on the second and third ones.  The action button is also in games two and three for a ground-pound when in a standard jump, and although three separate unrelated functions on a single button sounds like a weird design decision it ends up working out fine.

The level progression in all three games is also roughly the same.  In Spyro the Dragon each level contains a number of Elders to wake up from their crystal sleep, while in Spyro 2 he’s chasing after green spheres to power a gate and in Spyro 3 he’s searching for dragon eggs.  Each hub world holds a number of gates leading to the individual levels, and once you’ve met the area’s requirements there’s a balloon ride to the next hub.  Both the hub worlds and standard levels have a number of gems and main goals ready for a curious dragon to uncover, and you can cue up a full list of level goals at any time.  The Spyro games are meant to be 100%-ed and a big part of that is making sure the player knows exactly where they need to backtrack to.  This is made much easier than the originals by means of fast travel, so you can not only see what level needs a little work but also enter it directly from the same menu. 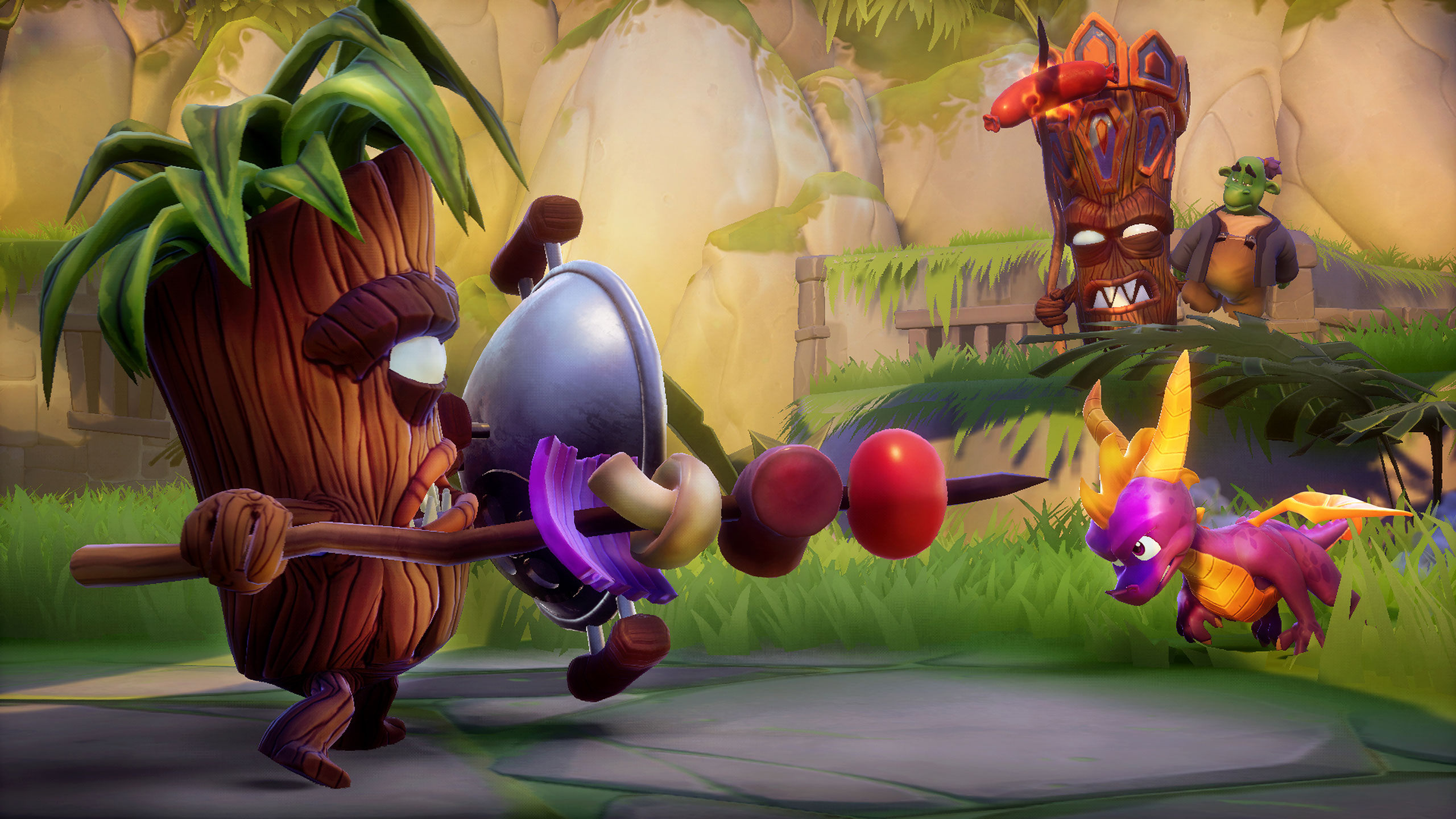 The lovely thing about this is that it lets you get all obsessive-compulsive about three games worth of goal-chasing and gem collecting across a huge variety of levels.  Having the games together does an amazing job of showing off how much work went into making sure that repetition was kept to an absolute minimum, which is deeply impressive when even just the first Spyro has 17 regular levels, four free-flight areas, five hub worlds, multiple boss fights, and a bonus level for getting 100% on all the earlier areas.  True, the levels are relatively small, but they expand a bit in the later games and honestly, it’s nice that the space is used efficiently.  Whether you’re in the clouds, the desert, a mountainside, grassy green fields, exploring underwater, or surviving the hazards of an industrial area, it’s good to be able to search the entire level for that last missing gem in a minute or two.  It also helps that, once an enemy is defeated it’s gone until you reload the level from scratch.  This makes level progression one of quick and frequently intense skirmishes broken up by more relaxed exploration, and it’s an easy tempo to settle into as one level moves on to the next and it’s 3AM before you quite realize how it happened.

One of the fun things about having all three games together in a single package is seeing how the series evolves, moving from being purely Spyro-centric to building a cast of, basically, furries to act as sidekicks.  In Spyro 1 it’s all Spyro, all the time, exercising his basic abilities.  Spyro 2 lets Spyro learn several new skills, and while ladder-climbing may not be particularly exciting the ability to swim opens up several new types of level, plus the game adds a recurring cast and each level is its own little story.  Spyro 3 opens things up even further, with multiple playable non-Spyro characters joining the adventure and most levels having several different play-styles in different sections.  You can practically feel the Insomniac Games of the late 1990s growing towards the developer it is today.

That’s not to downplay the work that went into polishing Spyro into its current form, though.  Every character, monster, enemy, and critter has been given a full makeover, most notably with the dragons from Spyro 1 changing from a handful of models to each one being its own unique design.  The level layout is almost perfectly identical but the level of detail is beautiful to see.  Even the music is updated, although for purists the original tracks are available in the menu.  There are a few technical hiccups here and there, like the occasional moment of inconsistent framerate and surprisingly long load times, but that doesn’t prevent Spyro Reignited Trilogy from becoming the definitive version of these PS1 classics. 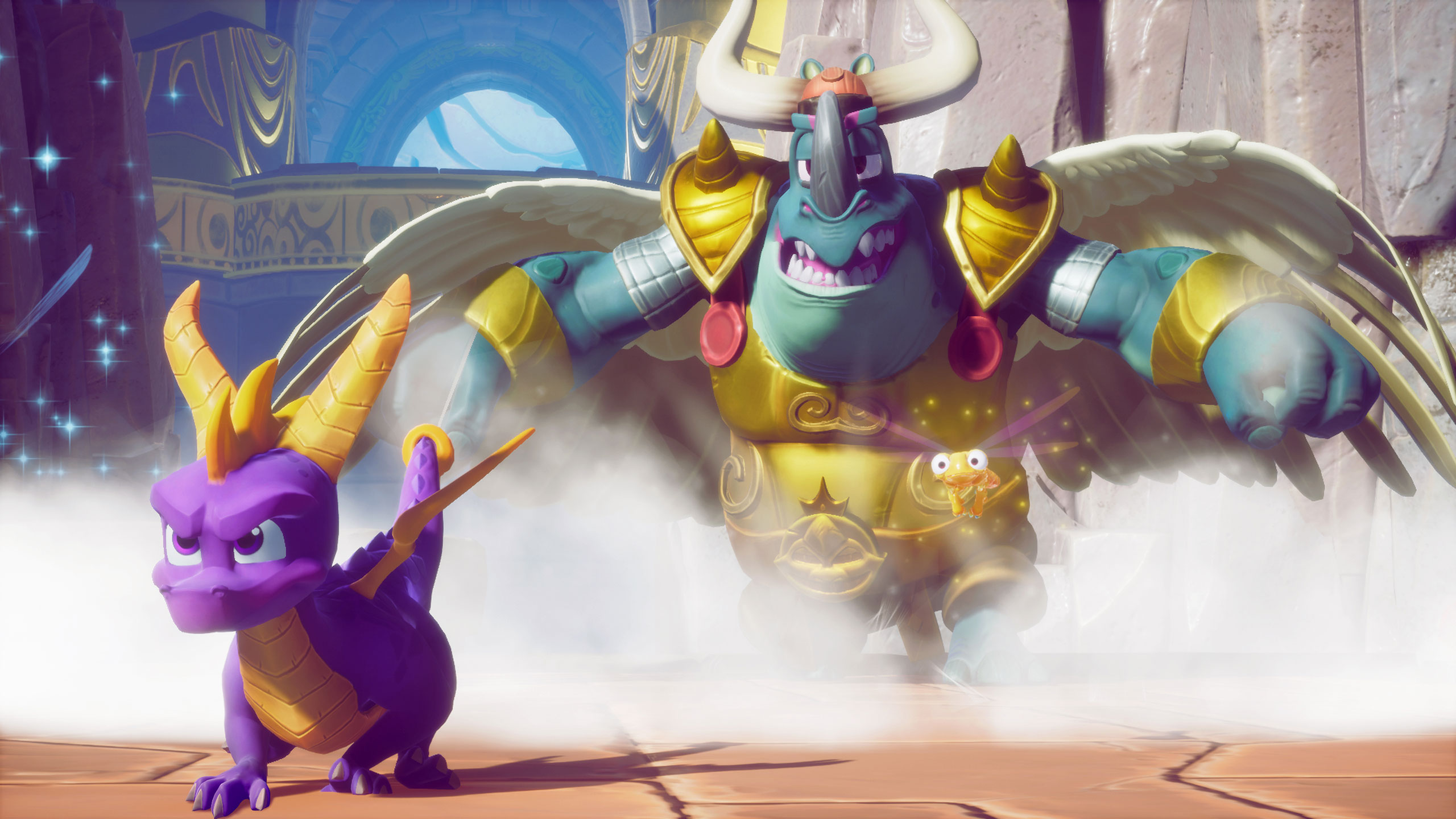 Nostalgia is a tricky thing in that it tends to be a liar more often than not.  It’s easy to remember something as far better than it actually was, especially when it’s a game from the early days of 3D.  The Spyro games were legitimately great for the time, though, and thanks to an near-perfect balance between preservation and updating, Spyro Reignited Trilogy is every bit as excellent by today’s standards.  There are rare moments of 90s awkwardness (Spyro on a skateboard, dude!) but those are few and far between, and the vast majority of the game is spent in a timeless cartoon-fantasy setting running, jumping, and breathing fire through endlessly creative levels.  Spyro Reignited Trilogy is an incredible collection of games from the 3D platformers’ heyday, and a fantastic reminder of just how good the genre can be.