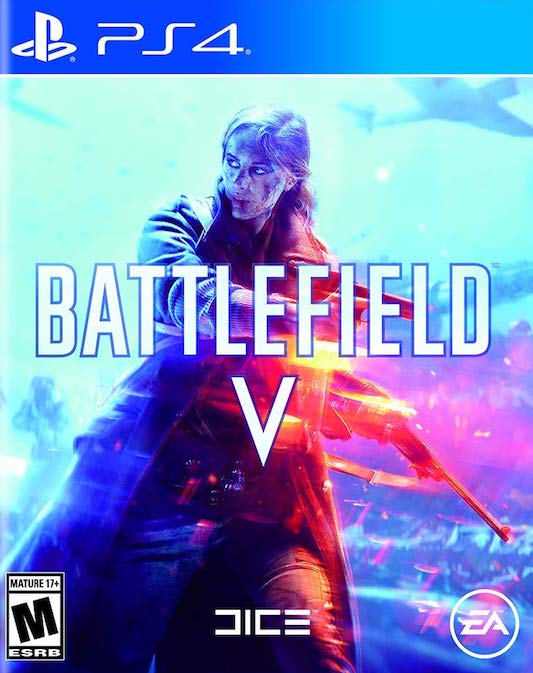 With a franchise as long running and storied as the Battlefield series, each new release is an event. Starting out as a PC-only multiplayer shooter, it evolved into a juggernaut whose only real rival is Activision’s Call of Duty series in terms of the style of play and the mind share captured by connoisseurs of more robust, but accessible, shooters. Indeed, there tend to be two camps of fanbases, CoD and Battlefield, at war with each other, spewing more flames than a Spitfire that caught too much flak. Last time around, DICE and EA followed up the middling Hardline with Battlefield 1, breathing new life into the series and once again taking the dominant position in regards to quality. The newest title of the series continues the trend, hewing close to the meat and potatoes of what makes the series stand out, while reworking the garnish to create a whole new dish.

The announcement that Battlefield V would be taking place in World War II was initially heralded as a return to the original title’s roots. Battlefield 1942 and the last-gen arcade sequel, 1943, built upon the conflict in interesting ways. While the Allies versus Axis theater is used to great affect here, it’s best to remember that V is a sequel to 1. Much of what worked in the last one, such as the heavier focus on building destruction and the feeling of being in the mud and guts of an actual battle, is brought forward here. As to be expected, the drive and longevity to be found here rests in the hands of the classic multiplayer. The four class system of Recon, Assault, Medic and Support are still present, and the core battles for control points remain the focal point of the best modes available. The return of the Ticket system, with an ever dwindling number of spawns being shaved off better representing the attrition of war than 1‘s score based dynamic, makes this feel like a return to form. That’s not to say that it’s all more of the same and there are multiple match types to check out.

Conquest is the baseline Battlefield experience. Two teams of 32 players murder each other over control of strategic points on the map. Each kill takes off a ticket from the the opposing team’s pool of spawns, while holding the majority of points shaves off even more. Many players will gravitate to this mode as it’s well balanced and gives each class a chance to pull their weight while allowing for the brutal mixtures of infantry, armored and airborne warfare. Conquest Assault is similar, expect the focal point is on one objective at a time, forcing defensive or offensive play. In a way, this removes some of the strategic thinking that squads can utilize, but also makes for some of the most chaotic and invigorating firefights in the genre. Domination is similar to Conquest, except it places the focus on infantry only. There’s also Airborne, where the player begins by parachuting onto the map with the goal of destroying control points instead of just capturing them. 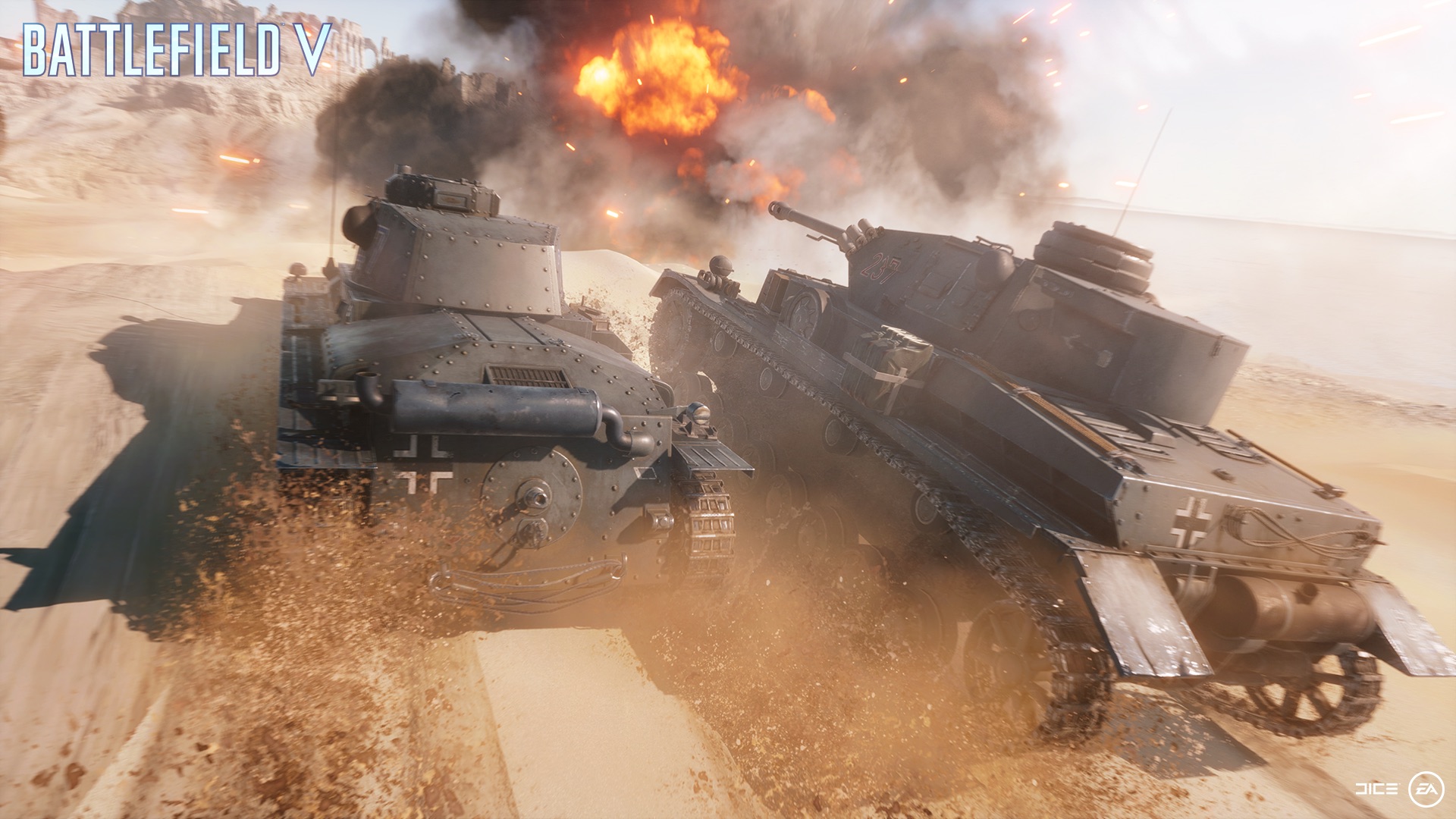 The one mode with the most potential is Breakthrough. Players either take the role of attacking or defending. It starts out with the attackers needing to capture and hold two points simultaneously while balancing limited lives available for respawns. Success forces the enemy to retreat and the offensive goes for two more points. The final stage of the match requires the attackers to capture and hold three points at the same time. With the concentration of defenders and the limited lives available to the offensive team, the defenders have a huge advantage. Even with rudimentary use of the new Fortifications system, it’s difficult to lose against the aggressors. Personally, I have played matches where we were able to win the day despite the fact that we were playing like, well, complete buffoons. We had no business winning. Conversely, pushing for ingress smartly and skillfully with teammates ended poorly because of the requirement to hold the three points at the same time. This could become one of the best modes in the game with some rebalancing, but it’s currently an exercise in silly amusement or frustration, depending on which side is drawn.

It’s to the game’s benefit that losing is still invigorating. DICE has always made good use of their settings and tech to create the feel of harrowing situations. With Battlefield V, a greater emphasis was placed on making the proceedings feel more kinetic. There’s a real weight felt when throwing one’s self over a wall for cover; it’s never a question as to whether or not outgoing fire is having any impact and each weapon handles like the player is holding a raging beast of barely contained fury. It’s fun to shoot here and each bullet lands where the weapon is pointed in short to midrange gun battles. There’s a line between fun and simulation in play here, but the fun side of the equation always wins out, even if it’s not immediately obvious how. A prime example of this would be in the revival system. In Battlefield 1 and other previous titles, only medics could revive a fallen teammate, but the shot was instantaneous. Now, squad members can pick up other squad members, though it’s slower. Medics can still do it quicker, and revive folks outside their squad, but it still takes time. This might seem like a change for the worse, but that time to revive makes for more satisfying moments as a Medic. 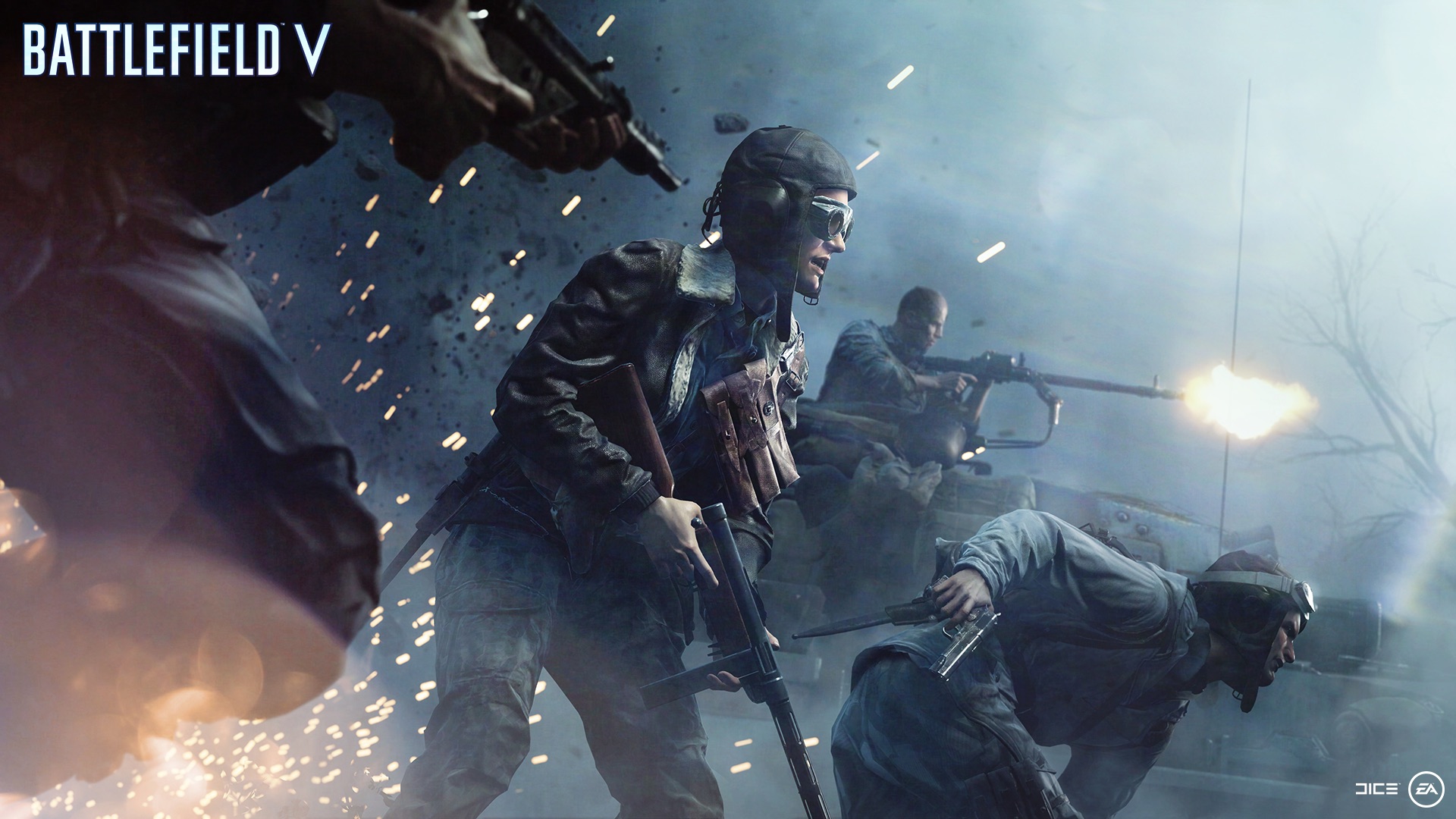 One major new feature is in the introduction of the Fortification system. Each control point has parts that can be build up with sandbag walls, barbed wire, trenches and more. Support class can build these out faster and erect machine gun emplacements. Each point has a predetermined part. A player cannot dig a trench where a sandbag wall should be, for example. While some might balk at this lack of customization of strategy, it works for allowing the building of elaborate constructions without the need for fiddling with extra menus. As a system, it adds some real benefits. Less skillful shooters can still contribute meaningfully to the team. Plus, there’s a whole new tactical element to consider that adds to the entire experience without detracting from any other point. That’s not even getting into the joy felt with firing a tank shell directly into a well fortified emplacement and watching somebodies hard work fly apart.

A controversial aspect surrounding Battlefield V lies in the inclusion of female troops, with the primary argument that it’s not realistic. This is a game that already has a serum that reverses the negative effects of a bullet to the head, so that point is out the window. This leads to the principal reason for the inclusion: customization. There are a ton of cosmetics to unlock and equip in the box, allowing each player to craft their own take on a class’ appearance. Gasmasks, facepaint, helmets and so on can be equipped on one of many premade “characters.” This is before getting into the weapon skins, with each part being able to be customized. This allows for some clashing concoctions, such as a gold plated barrel, chromed receiver and a stock that appears to have been used to test woodchippers before enlistment as part of the gun. This emphasis on freedom of personalization serves to boost the replay value. 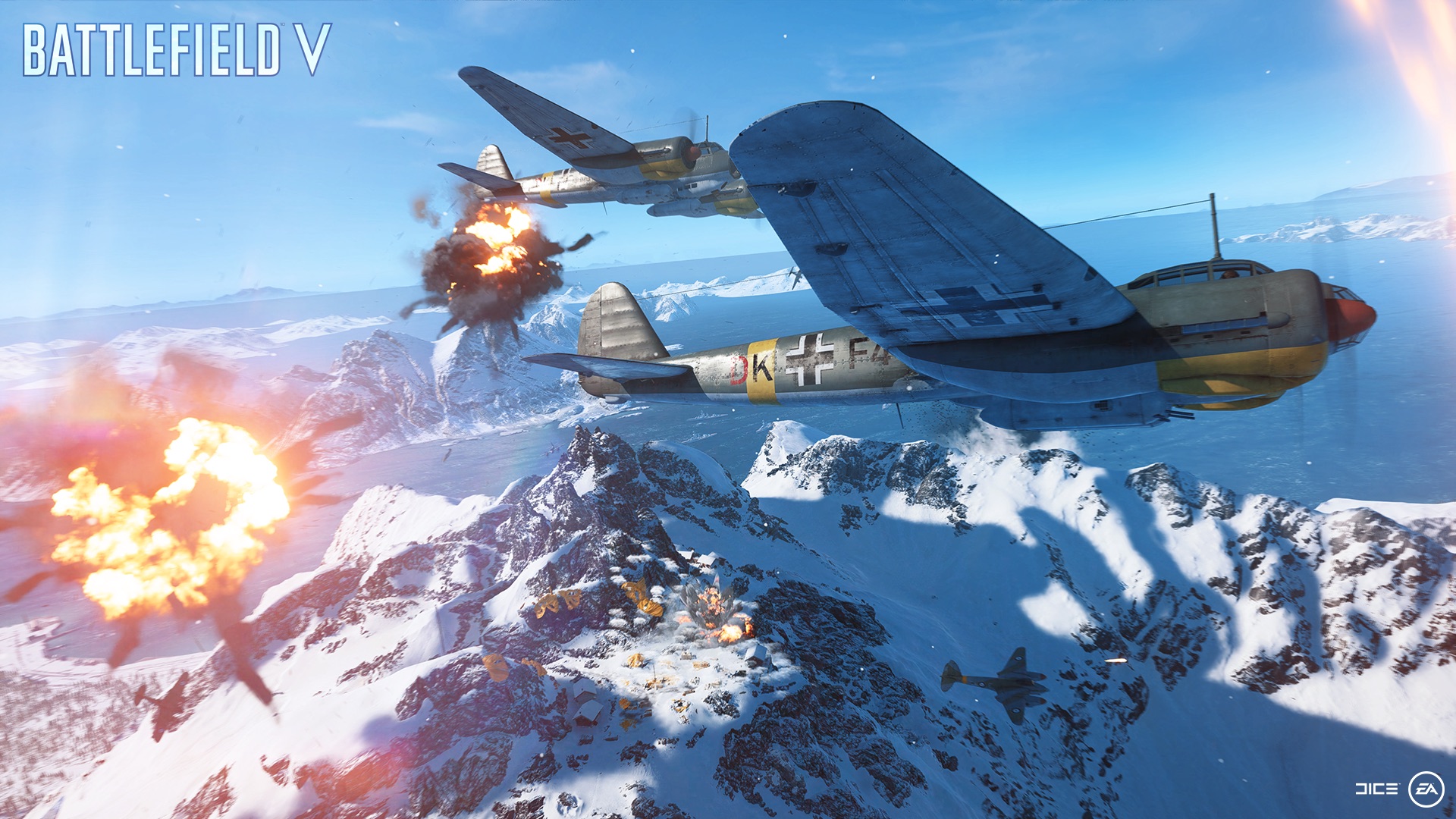 As of this writing, EA has not announced when and how they are introducing their premium currency to the game. For now, everything in the game can only be earned by playing the game. Therefore, when coming across a Support player with the full Union Jacked regalia and a completely blue metaled LMG, one can expect that the person is experienced and formidable. All of those things were earned through hard work and dedication, which isn’t something to be said about a game that awards cosmetics through random drops or direct purchases.

This isn’t to say that EA has no right to add additional monetization elements to their game. Every purchaser of the base game has access to the “Season Pass” in the form of the upcoming Tides of War expansions. Featuring new maps, modes and story missions, these aren’t small updates either. Since the decisions regarding how they will monetize to make up the difference hasn’t even been made at the time of this writing, it seems that the developer and publisher have placed the impetus on creating a quality product first in an effort to win back fan support after the debacle that was Star Wars Battlefront II. 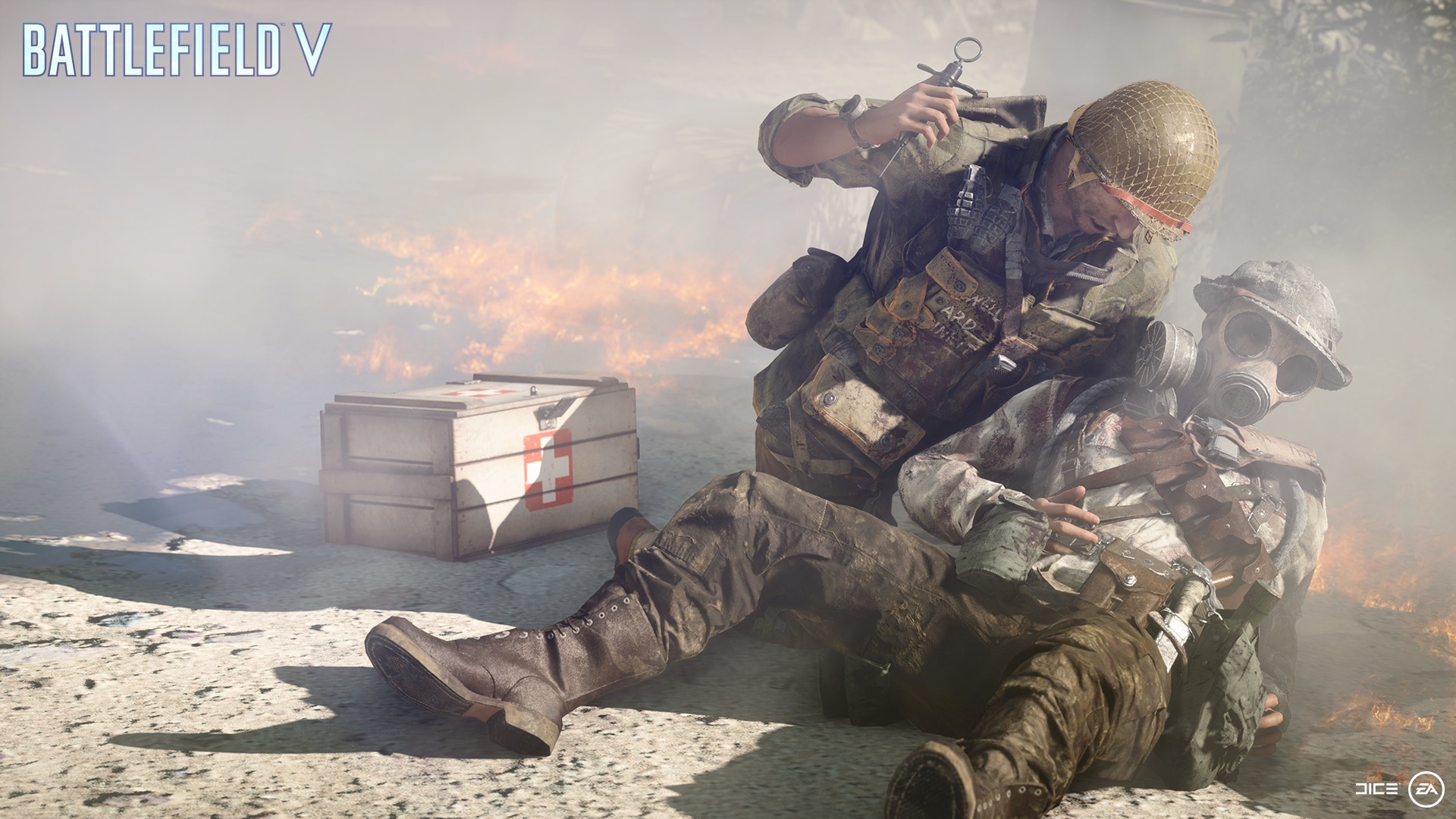 Battlefield V brings back the War Stories single player anthology. Taking place in three separate theaters with three different characters, these stories are basically a step above a normal tutorial with some cool bells and whistles thrown in. The CGI cutscenes are sharp and well-acted, and there are all sorts of outstanding moments, such as stealthily skiing down a mountain to infiltrate a German military installation. Were these tales given more time and room to breathe, they could have been something special.

Take Under No Flag for example. This is a tale of a perpetual screw up and failed criminal, Billy Bridger, and the beginnings of what would become the SAS. Billy is a stupid kid with more cajones than brains, something that he demonstrates in quick order on his first foray behind enemy lines. His failure ends up leading to him needing to redeem himself, which he does in short order. Then the story is over. Billy had a chance to become a interesting character, one who is forced to grow up under a hail of bullets. There was a chance to create a campaign full of humor, heart and verve with just this one scenario alone, but it’s cut short. Fortunately, the action and movement that informs the multiplayer is present in the single player, so these stories are still fun enough to play when the internet is out.

Finally, we come to the issues with bugs. I have observed many throughout my time with Battlefield V and none have them been pleasant. Issues with reviving teammates popped up, where the button prompts would show but nothing would happen. People clipping through the levels geometry would also be a common occurrence. I’ve fallen though the bottom of the map while waiting for a revive, gotten stuck in some rocks and had games fail to load. The last time I played, there were numerous freezes and the game finally crashed to desktop. The thing is that the developer has been feverishly working on fixes and many of these issues have been resolved in the days since. It’s likely that the crash issue has been addressed in the few hours since this occurred. This is a far cry from the flaming compost heap that was Battlefield IV and time will yield a solid product. Early adopters, however, should be prepared for some birthing pains. 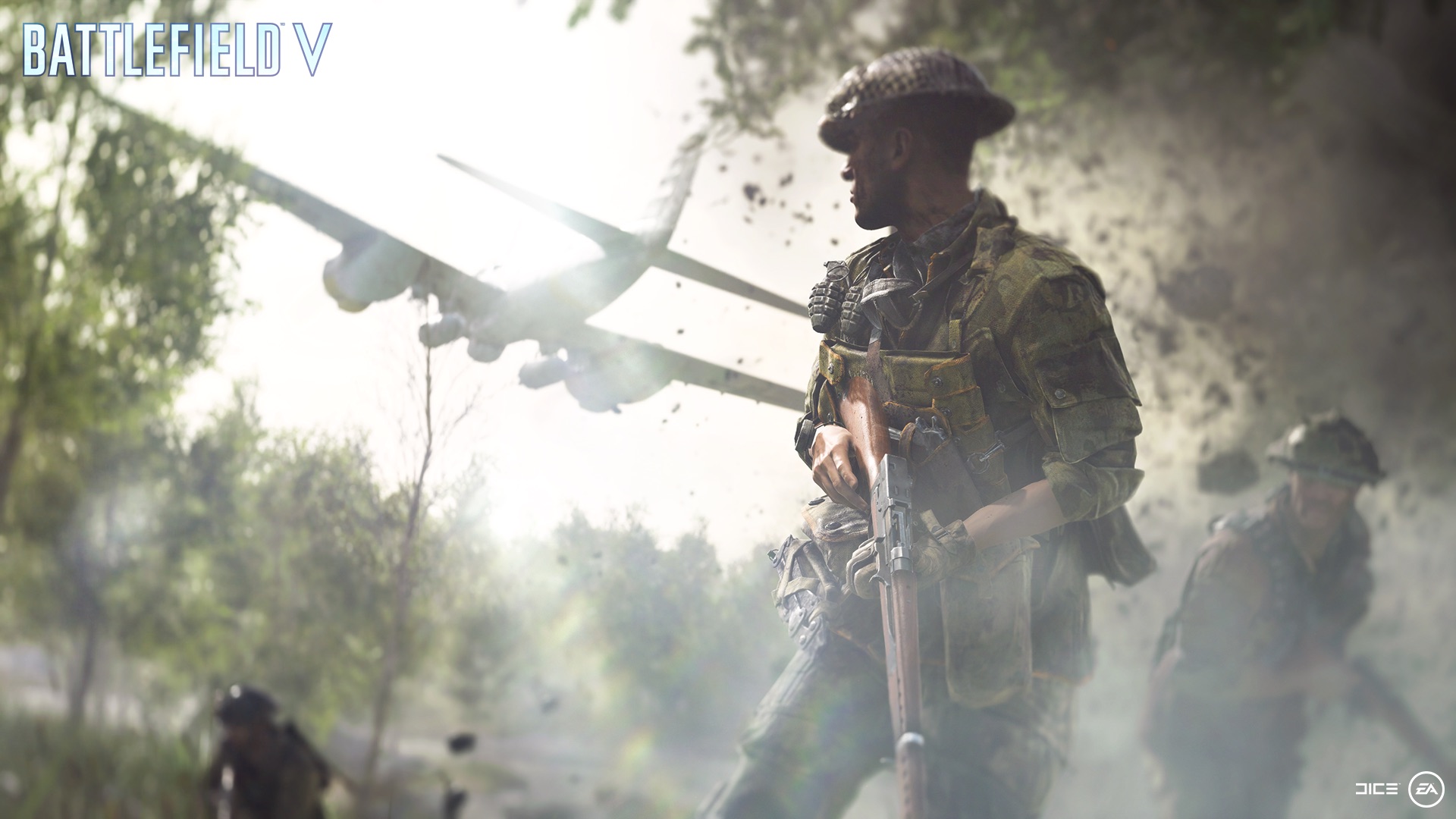 Battlefield V is one of the best current multiplayer shooters on the market. Points could be made for its contemporaries, but the full-featured package, the carrot on the stick in new cosmetics and upgrades, and the pure technical marvel that comes from the graphical and sound work raises the stature of the product as a whole. The fact that it’s a living game, with huge, full-featured updates to be added at no additional price just ices the proverbial cake. It’s true that the single player portion is a let down considering the massive amount of potential that peeks through, but the high-quality multiplayer manages to make up the difference. The only real question is in how quick and efficiently the final glitches can be resolved. Even with these present, the title is well worth a player’s time. Once the wrinkles get ironed out, the Battlefield V will be required playing for anyone with even a passing interest in throwing down online.