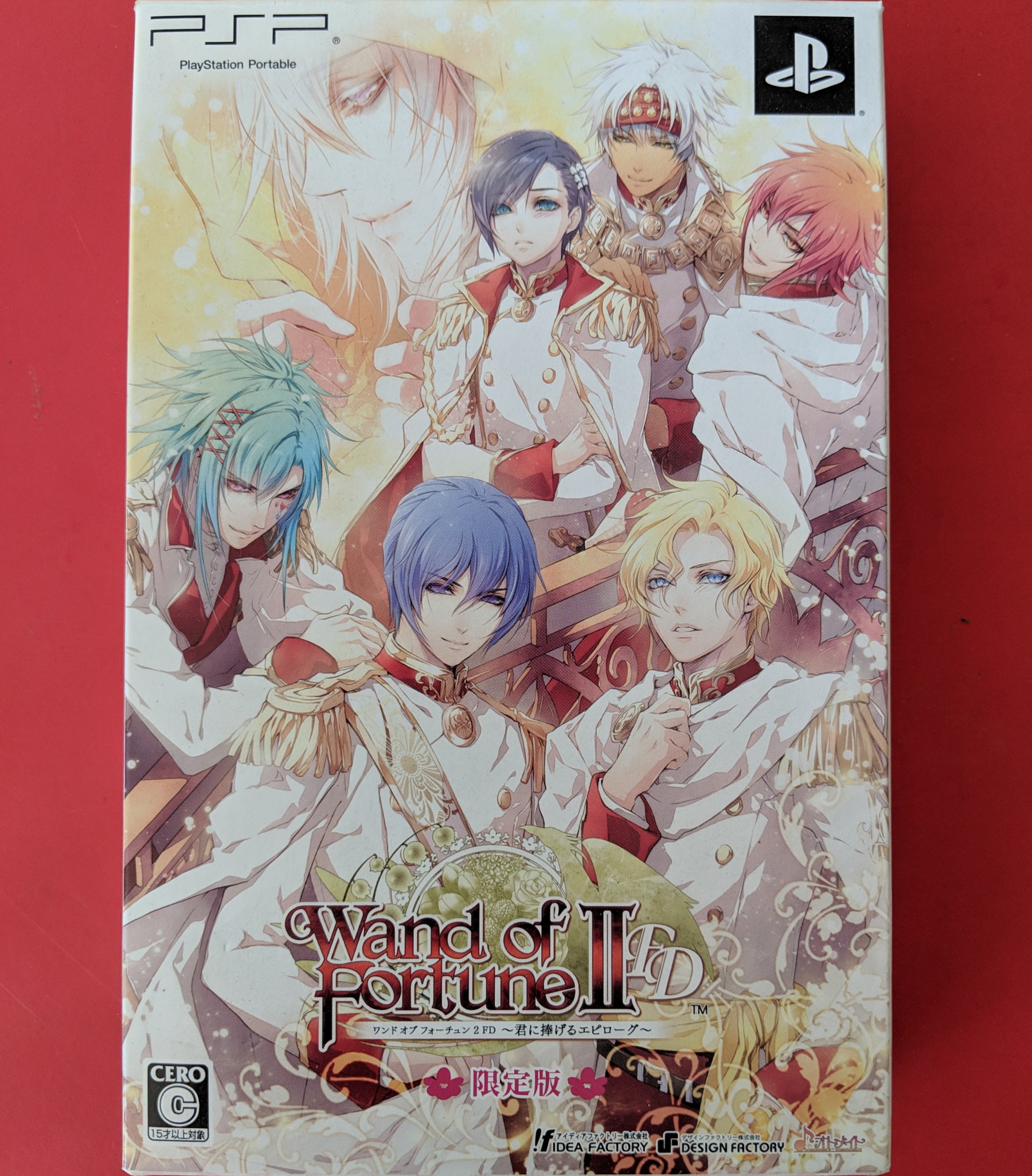 It’s fantastic to see so many visual novels releasing in English these days. With that said, there are still hundreds, if not thousands, of enjoyable titles still out there without any official translation. The otome fandom is aware of this disparity, though things are getting better. For example, the Wand of Fortune series isn’t available in English as of yet — and may never be. The original Wand of Fortune launched on PS2 near the end of its life in 2009. A year later, it re-emerged on PSP and became a hit with fans. The storyline featuring a protagonist named Lulu with malfunctioning magical powers was just too fun to pass up.

After that, there was a fan disc game and then the sequel Wand of Fortune 2 ~Jikuu ni Shizumu Mokushiroku~ arrived on PSP in 2011. Just last year a remake version, titled Wand of Fortune R2, came to PS Vita. In between these releases was what’s known as a fandisc. In particular, it was Wand of Fortune 2 FD ~Kimi ni Sasageru Epilogue~. This also came to both PSP and Vita. In general, a fandisc provides additional story content without becoming an outright sequel. Usually fandiscs also aren’t nearly as long as the game they’re based off. Still, they’re tremendously popular in Japan — a few fandiscs are even available in English. 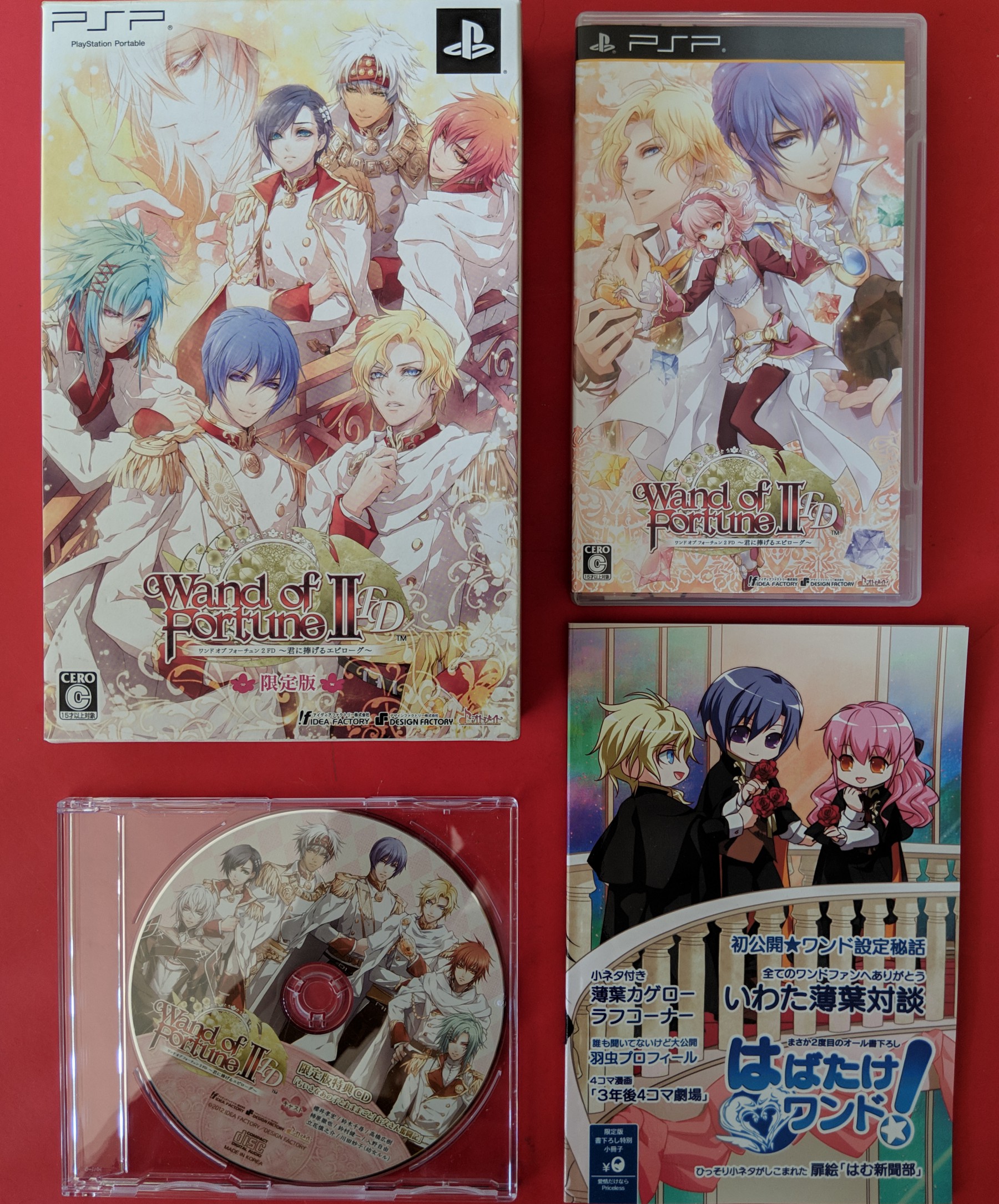 Wand of Fortune 2 FD provides a fun look at what happens after Wand of Fortune 2. Basically, the main routes showcase a grand ball and then what occurs three years after getting with each of the different romanceable men. There’s even a silly other path which turns Lulu into a mischievous child wreaking all sorts of havoc. The version of the game displayed here is the limited edition. All the game’s contents come packed in a wide cardboard box with exclusive artwork. Inside you’ll find a copy of the PSP game, an audio CD and a 42-page booklet.

The PSP game is about what you’d expect, with a UMD and manual enclosed within. Of course, visual novels don’t typically need much explanation. There are some great color illustrations of the guys in it, though! The CD comes in a slim jewel case without any cover or manual. It’s worth noting that this is not a soundtrack CD. Instead, it’s a drama CD which is a common addition for otome games. People love these characters and as such want to hear even more interactions with them. 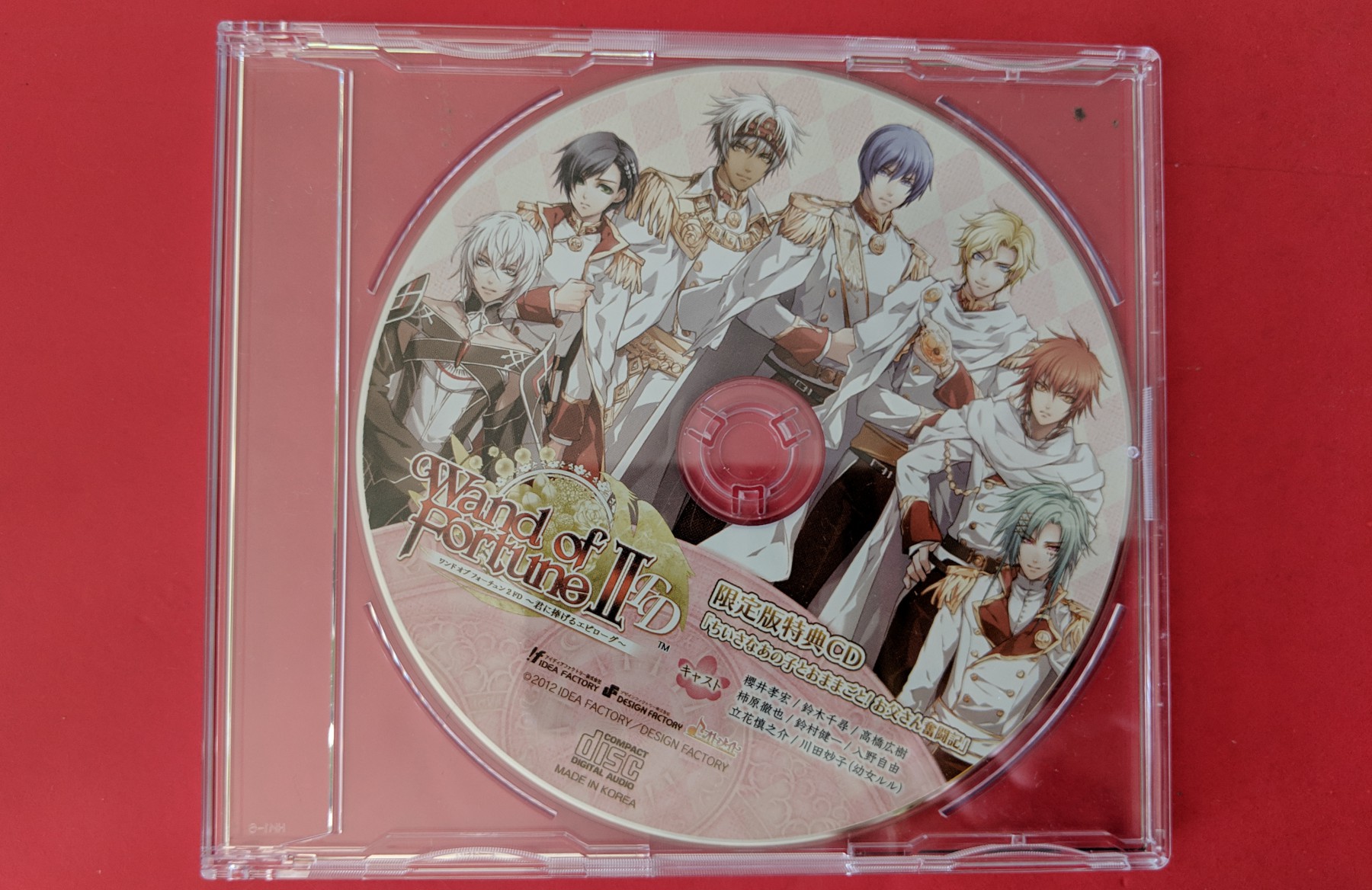 Finally, there’s the softcover booklet. This cannot be easily defined in any one way because it offers a variety of content within its pages. There’s pages of artwork featuring the guys rendered in lovely watercolor illustrations. Then there’s a black and white comic in the middle. Finally, after all that, there’s an interview. Of course, all the content is written entirely in Japanese. It might not be the most exciting limited edition of all time, but it’s not bad. The only let down is a lack of character art cards or perhaps even keychains.

With the recent re-release of Wand of Fortune 2 FD in Japan, it’s clear that the series still has a lot of life in it. Developer Otomate is moving from Vita to Switch, so chances are a port will appear in the future. Here’s hoping that a Switch release will finally happen when an English version appears!