Stop me if you’ve heard this particular declaration before: “Legend of Zelda: Ocarina of Time is by far one of the greatest games ever made…nay, the greatest game ever made.” And as an added bonus, but one I personally offer more intrigue over: “Ocarina of Time is by far the best Zelda game not just of the 3D iterations, but of the entire series.” While not as forcibly aware of posthumous discussion on the game as some of you may be (that primarily seems to take the form of long-form/long-winded videos nowadays rather than written editorials), it’s not hard to come to terms with the fact that more and more people tend to share the same sentiment that Ocarina of Time — even pre-Breath of the Wild, another Zelda game, let alone a game in general, that also seems to have been donned the honor of “best game ever” — was never really a flawless masterpiece. Long before the 2017’s redefining of the series, it wasn’t uncommon (and still isn’t for that matter) to find discussion, be it serious or not, less around the game’s almighty highs…but instead on its seemingly-apparent lows.

You can debate the merits of an individual’s critique — as well as the manner at which they present it — but even the most zealot of fans should concede that any game heralded with such lofty accolades will inevitability find itself an easy target for deconstruction. For the record I think Ocarina of Time is a great game. One of the most-played releases in my library if we’re going off of return playthroughs with the intention of not only reaching the credit’s screen, but in some cases attaining 100% completion. Of course there are going to be those who profess — rightfully and perhaps honestly so — that they don’t like the game. That it didn’t, and still doesn’t, click for them…that it just isn’t their cup of tea. Fine, we all have different tastes and preferences; we all fall into that seemingly splintered minority at one time or another, myself included. But for those who would declare that Ocarina of Time is still the best entrant, does that conclusion — twenty years on from its original release on N64 — stem from weighing up all necessary pros and cons of all releases in the series up to this point, or is it just simply nostalgia talking? 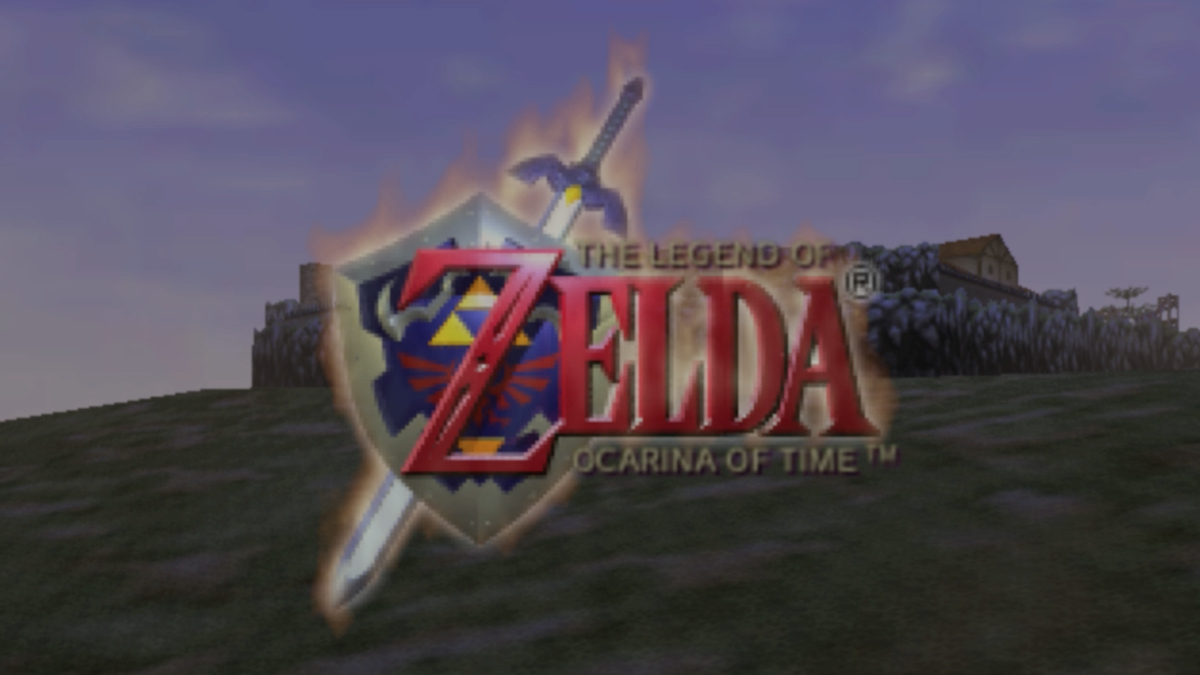 From my perspective, before, during and after my first time playing through a self-purchased copy of the game (technically my first ever try came by way of a Toys ‘R Us store on a late Friday night) Ocarina of Time, while an objectively great experience at the time, was far from perfecting all reaches, Zelda entrant or not. My interpretation was not on whether Ocarina of Time (or any iteration) was simply “the best,” but whether its direction this time round paid off. Let’s frame it another way: The Legend of Zelda series could be considered one of Nintendo’s most flexible but adaptive series in terms of artistic and structural variety in design. Where Mario will inevitably fall back on its platforming or Metroid its exploration, the priority has shifted many a time with Zelda. Everything from layout, challenge, aesthetic, controls, storytelling; no one game can be considered the same even if, on a superficial level, things may appear relatively unchanged.

The objective often confines to the same basic formula: complete x amount of dungeons until the game says you’re done and save the princess/the land/the Link, but you’d be foolish to assume that the original Legend of Zelda’s unrestrictive, trial-and-error approach is the same as Adventure of Link’s side-scrolling RPG-lite affair. Similarly to the way A Link to The Past’s grand unveiling at the half-way mark contrasted with Link’s Awakening inevitable, melancholic realization. These differences can be affront like their pacing or their aesthetic, or more engrossed such as the tone or debated themes, but if there’s one universal rule, and thus universal intrigue about The Legend of Zelda, it’s that the series has never stayed in one spot for a considerable length of time. Even if some would argue the core premise lying at the heart of all this has, by effect, hampered any real revolutionary steps forward. 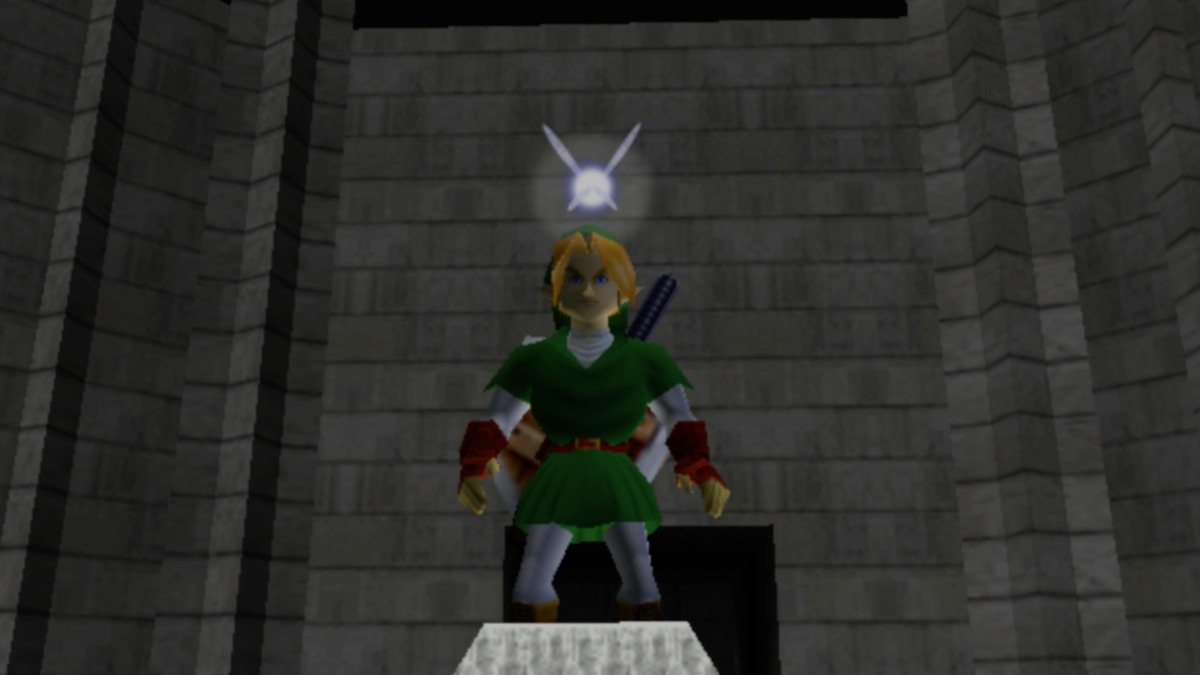 But look a smidgen deeper and you’ll realize that things aren’t always that relatively straightforward. Ocarina of Time’s grandiose story-beat epic of good vs evil, contrasts itself with Majora’s Mask’s more brooding, apocalyptic, character-led focus on tone, which itself stands apart from Wind Waker’s vibrant, exaggerated, cel-shaded sprawl of care-free oceans and isolated islands alike. Twilight Princess saw the integration of motion-controls as it did a rekindling for Ocarina of Time’s pseudo-fantastical roots — itself offering a noticeable difference in delivery to Skyward Sword’s watercolor-like aesthetic, explorative-lite discovery and, elephant in the room, intrusive “let me spell it out for you” hand-holding. And this is just the [vastly agreed-upon] 3D games — no mention of the many 2.5D follow-ups for any of Nintendo’s handheld devices intended.

Of course, the advent of 3D with the fifth-generation of consoles (namely the Nintendo 64 and original PlayStation) meant games of that era could be touted, by definition, as the next evolutionary step for a series, in much the same way the fourth-generation of consoles — and more specifically, 16-bit graphics — widened the parameters of creative potential to carve out worlds, settings, characters, themes and ideas we hadn’t experienced up to that point. Would either Super Mario 64 or even Final Fantasy VII be similarly lauded if they remained purely 2D/sprite-based affairs? But to assume a simple addition to one dimension automatically constituted some lauding of praise over its 2D brethren, not only paints 3D as some be-all, end-all guarantee for success, but it disregards the many leaps and bounds that older titles made over the course of the previous ten years preceding 3D. Be it as it may through retrospect, the fact of the matter is that some ideas and executions of such on previous-gen consoles have aged better than those present on the fifth-gen and beyond. 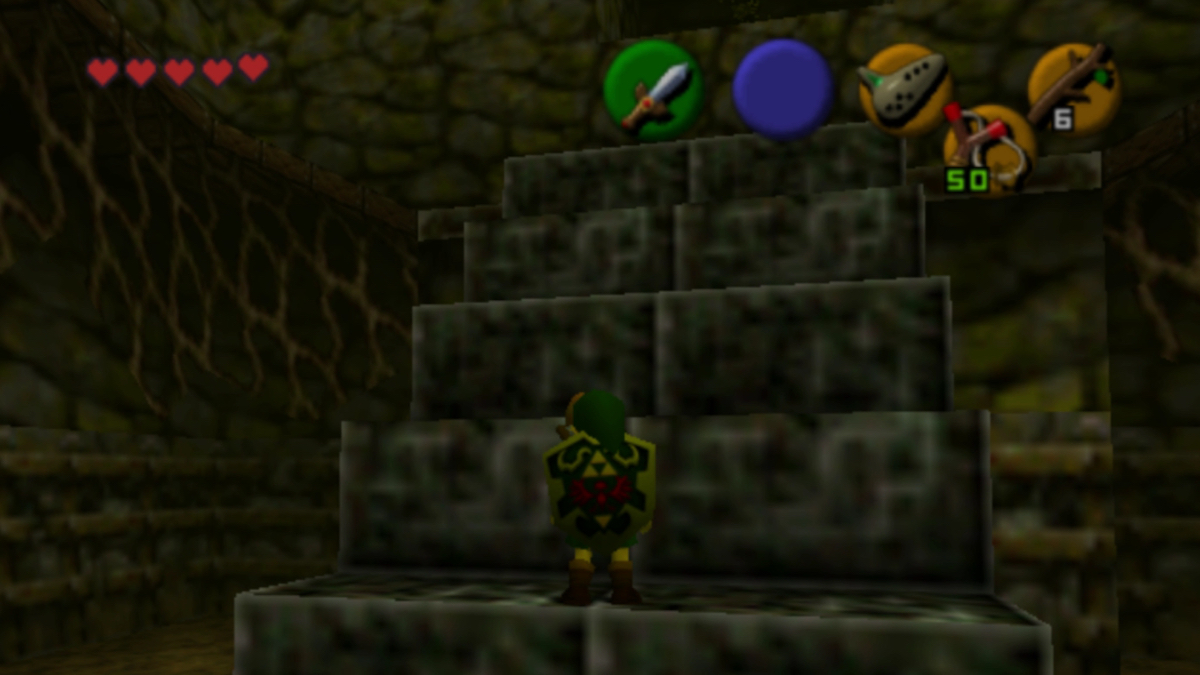 It’s here where Ocarina of Time arguably falters slightly on one of its more apparent drawbacks when returning to the game years later, as I have done as of recently leading up to the game’s 20th anniversary. You needn’t look at it through the perspective of ever-advancing technology to realize that even from day one, Ocarina of Time — though approaching things such as level design differently nonetheless — was restricted in what it could achieve. And it shows relatively early on in its representing environments in the overworld. The flat, penned-in limitations of Hyrule Field; despite [at the time] the vast swathes of green impressing my former nine-year-old self’s perception. The way implied landmarks and regions are but mere 2D textures in the near-distance — tight channels, paths or staircases the only evident proof that there was indeed an element of exploration to be had here. An unfortunate symptom of the N64’s limited memory and older cartridge-based hardware — its 2000 follow-up requiring the separately-sold memory upgrade via the Expansion Pack for Majora’s Mask’s improved illusion to size and liveliness with how NPCs moved about the world, to thrive.

If there’s one thing this sequel couldn’t contest its predecessor on, however, it would undoubtedly be its dungeons. And as much as I can highlight future iterations, like Majora’s Mask’s inverting gimmick in Stone Tower or Twilight Princess’ uncanny setting via Snowpeak Ruins, when it comes to 3D dungeons (or simply dungeons of any Zelda game), Ocarina of Time just may boast of possessing some of the best examples in the series. Without going into detail (something which I’ve covered in an accompanying piece), what remains so interesting about the five Temples — a crucial if not sizeable bulk of the game’s roughly twelve dungeons — particularly in Ocarina of Time is not simply how varied their aesthetics and visual designs appear, but also how the game took to difficulty in a way that didn’t simply conform all elements to an inclining curve of challenge and objective.