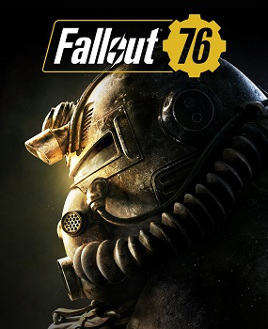 Fallout 76 was a surprise when it was announced earlier this year and the reception was not the most positive, with backlash that included a petition for a single player mode which received thousands of signatures in its first day. While unexpected, the announcement shouldn’t have been too surprising due to the settlement building feature in Fallout 4 and the continued expansion and support for The Elder Scrolls Online. Even with these factors taken into consideration, the concept of multiplayer Fallout wasn’t something most players were excited about as Bethesda Fallout games always had a lone wolf feel to them and taking it into multiplayer territory seems like it may detract from that. Oddly enough, even with multiplayer Fallout 76 feels like the loneliest title in the franchise.

Fallout 76 is not a traditional Fallout title, but more of a survival title. It’s designed to play in a familiar manner to the three previous Bethesda Fallout entries but incorporates multiplayer. The trade off is the world is lacking any NPCs, which was a source of some of the charm. The branching dialogue, using perks to intimidate, bribe or persuade along with the over-the-top personalities helped bring the post-apocalyptic wasteland to life. In Fallout 76 audio logs, computer entry and other echoes of the past are the only connection the player will have to the former citizens of Appalachia. Other players on the server will be the only other humans the player may interact with, which isn’t necessary at all.

The story begins on Reclamation Day, which is when the player is free to venture outside of Vault 76 for the first time. The player begins in the vault alone and follows instructions left by the overseer and service robots. The messages left behind serves as a decent narrative device for the tutorial since giving instructions on how to use the CAMP equipment and purifying water makes sense. During the early stages of the game this seems like an interesting way to advance the story and provide mission objectives, as it feels like this is building up to something important. The problem is it never does. The idea is actually not a bad one in theory, but in execution it wears out its welcome rather quickly. Going through computer terminals, holotapes and other communications left behind by the dead quickly gets boring. Progressing through the game is gain an objective goal from accessing a computer terminal, finding out where you have to go to achieve it and then get sent to another location. Everything feels like a tedious fetch quest a few hours into the game without any of the amusing character interaction that was present in previous Fallout titles. A greater drawback to this system is the ability to complete quests in different and meaningful ways is completely absent. 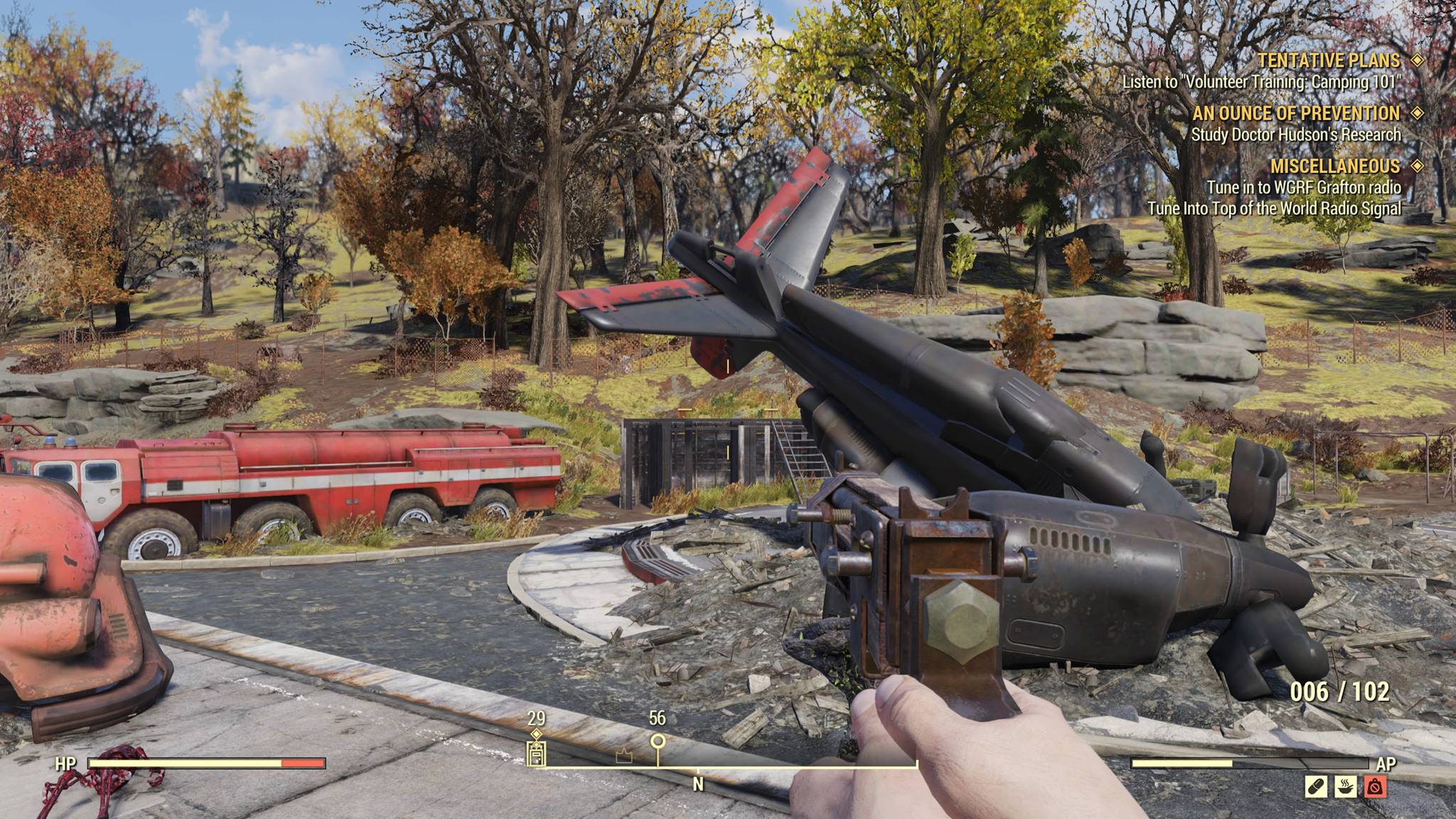 There are timed events that occur throughout Appalachia to give the player something to do besides just explore the country side or complete missions, but these tend to also suffer from the problem at large with Fallout 76: interesting idea, poor execution. Some of the events including defending a robot prison guard or fighting off waves of the Scorched. One problem is the control mechanics aren’t well suited for dealing with waves of enemies and the other is sometimes these events occur in an area the player may want to travel through. These events are much better suited for multiplayer events but they pop up in game regardless of however players are present and are more of nuisance than anything else in single player. Shooting from the hip is inaccurate, as there were several times when an entire magazine was emptied at center mass at point blank range with zero registered hits. Lining up the shot with the left trigger dig making shooting more accurate, but VATS is the best way to go.

VATS needed to be retooled for a perpetually online incarnation since pausing and slow motion aren’t viable options in multiplayer settings. The cinematic slow shots of an enemy receiving a buckshot induced amputation are gone with VATS being in real time but surprisingly the version in Fallout 76 works well. The targeted enemy is highlighted in green with the percentage to hit them displayed over their body. It more or less just functions as a visual aim assist, but it does make combat more enjoyable and give it a more distinct Fallout feel. 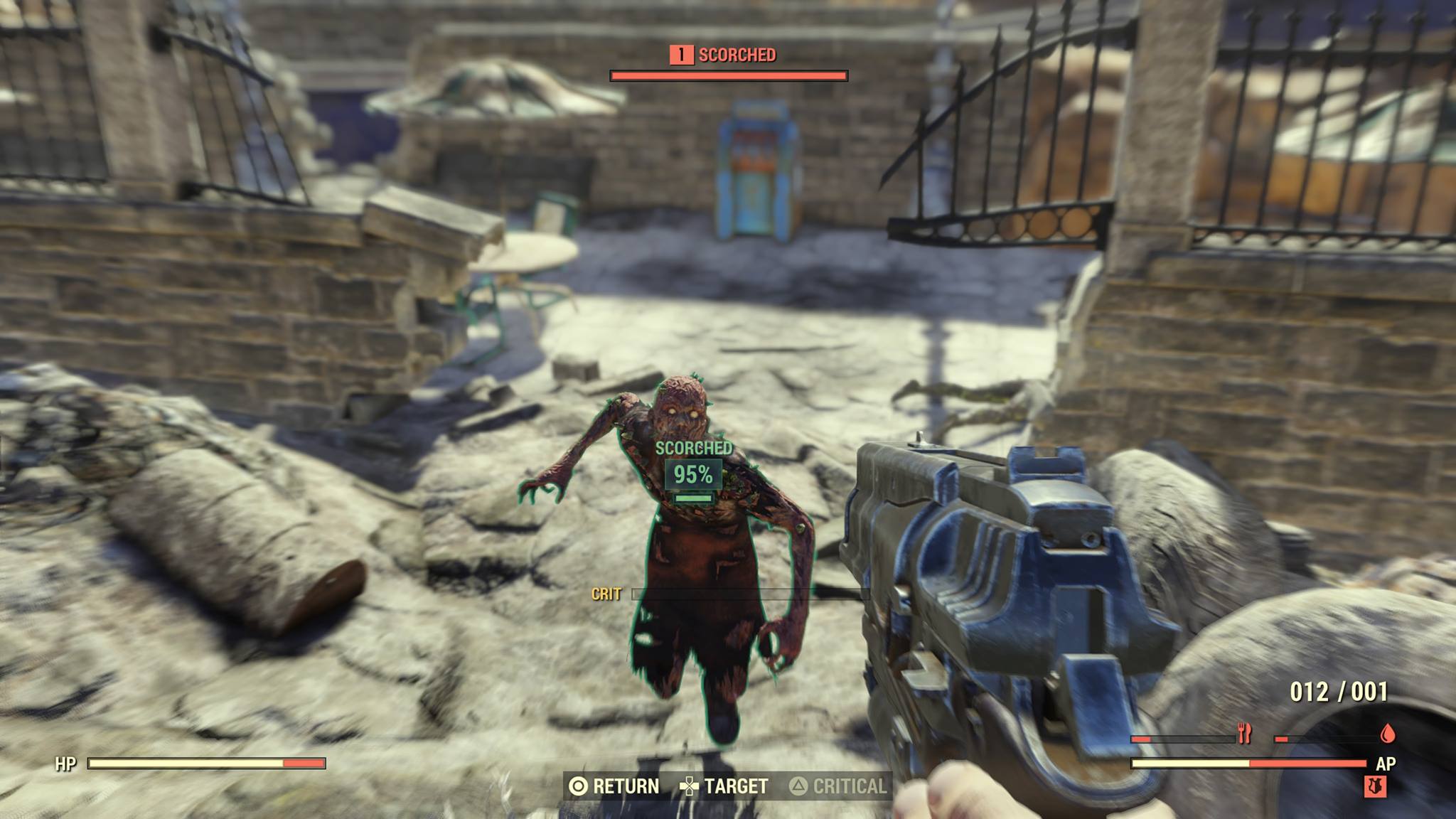 Fallout 76 has an emphasis on multiplayer, but it’s more of the survival genre than MMO. This employs some of the features of the hardcore mode of Fallout New Vegas such as having to make sure the character eats and drinks regularly. One hand this does create a more realistic survival experience, but given the heavily-mutated animals, super mutants and scorched individuals realism is an adjective that should only be applied to Fallout 76 in the loosest sense. What adds to the tedium of maintaining these basic vital functions is just about every consumable is irradiated or disease ridden. Proper preparations are needed in order to safely consume these items.

The perk system has undergone some revamping, and thanks to the ability to select active perks, using the newly-implemented card system allows for more experimentation with the character build, which is a welcome feature since in previous Fallout titles there was always some personal anxiety in selecting new traits in deciding between something interesting and unique or going with something that would be more useful. The equipment situation is a bit of a mess since the player will be able to loot weapons to their heart’s content, though most of what is pilfered is best scrapped for parts at work station where they end up taking up inventory space until the player finally finds the necessary rare item to make something useful. 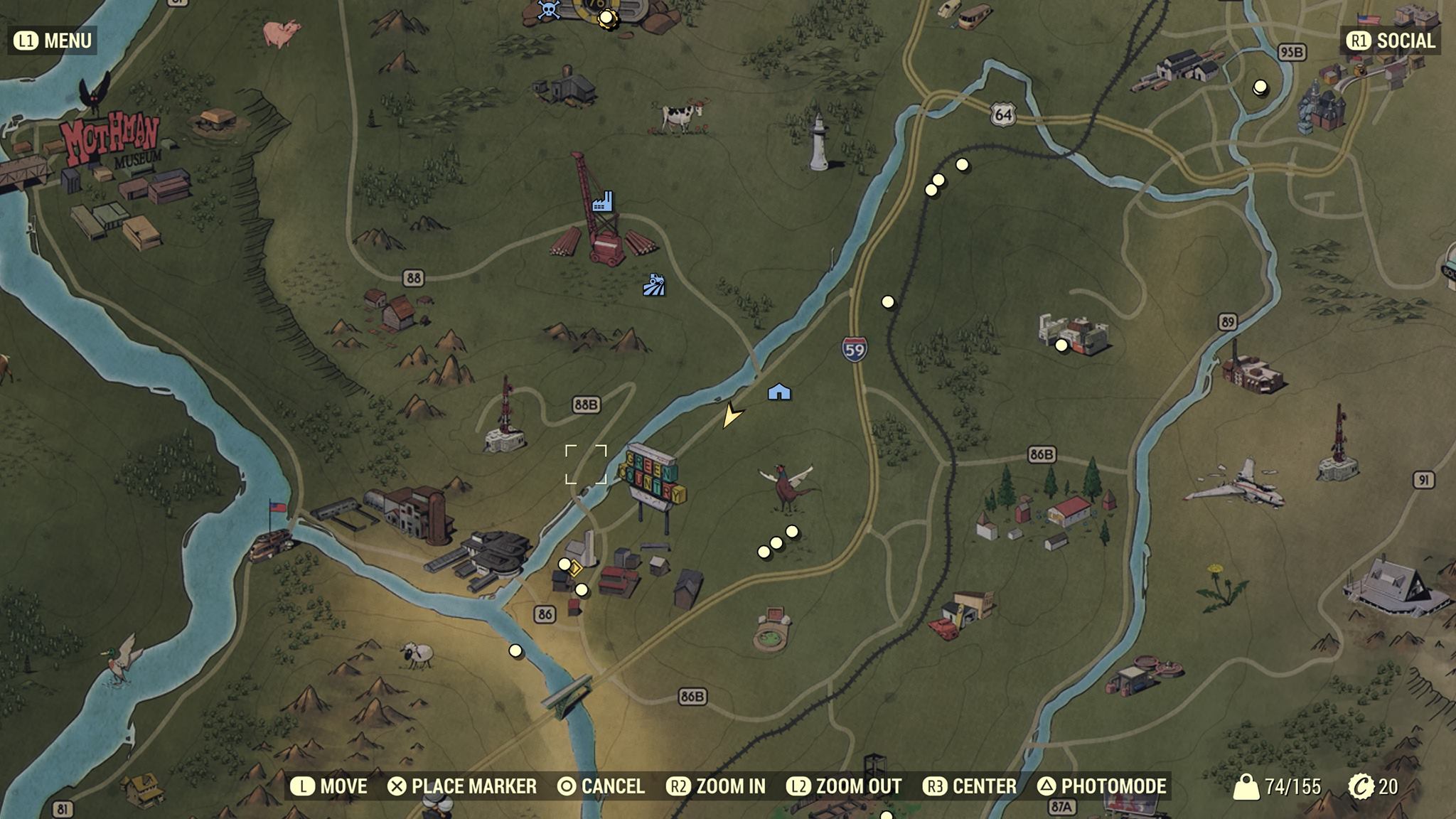 Technically Fallout 76 is a mixed bag. The landscape is just breathtaking in some areas with the leaves in the decaying shades of October’s rusty colors and some amusement park attractions that still contain the echoes of the now dead children’s laughter. The character models, on the other hand, look behind the times, which is disappointing compared to the rest of visuals. For the most part the online experience is stable, which is important since there is no offline mode, but there were the occasional lag, framerate and general glitchyness that can be expected from Bethseda titles so soon after launch, though about ninety percent of the time there weren’t any issues.

Multiplayer is the best feature of Fallout 76, though it’s not the greatest experience. With no NPCs, the entire story and mission objectives are told through found recordings or written records, and waiting for your companion to finish reading or listening to an audio log can break the momentum of the game, though not in a major way. Due to the nature of the quests getting boring, multiplayer is best suited for enjoying the random timed events that happen or simply exploring the wasteland with a friend. Voice chat is naturally supported and there’s an easily accessible wheel for quick responses and emotes to other players. It should be noted that while there is no separate fee for Fallout 76, console players will need to have Xbox Gold or PlayStation Plus in order to play. 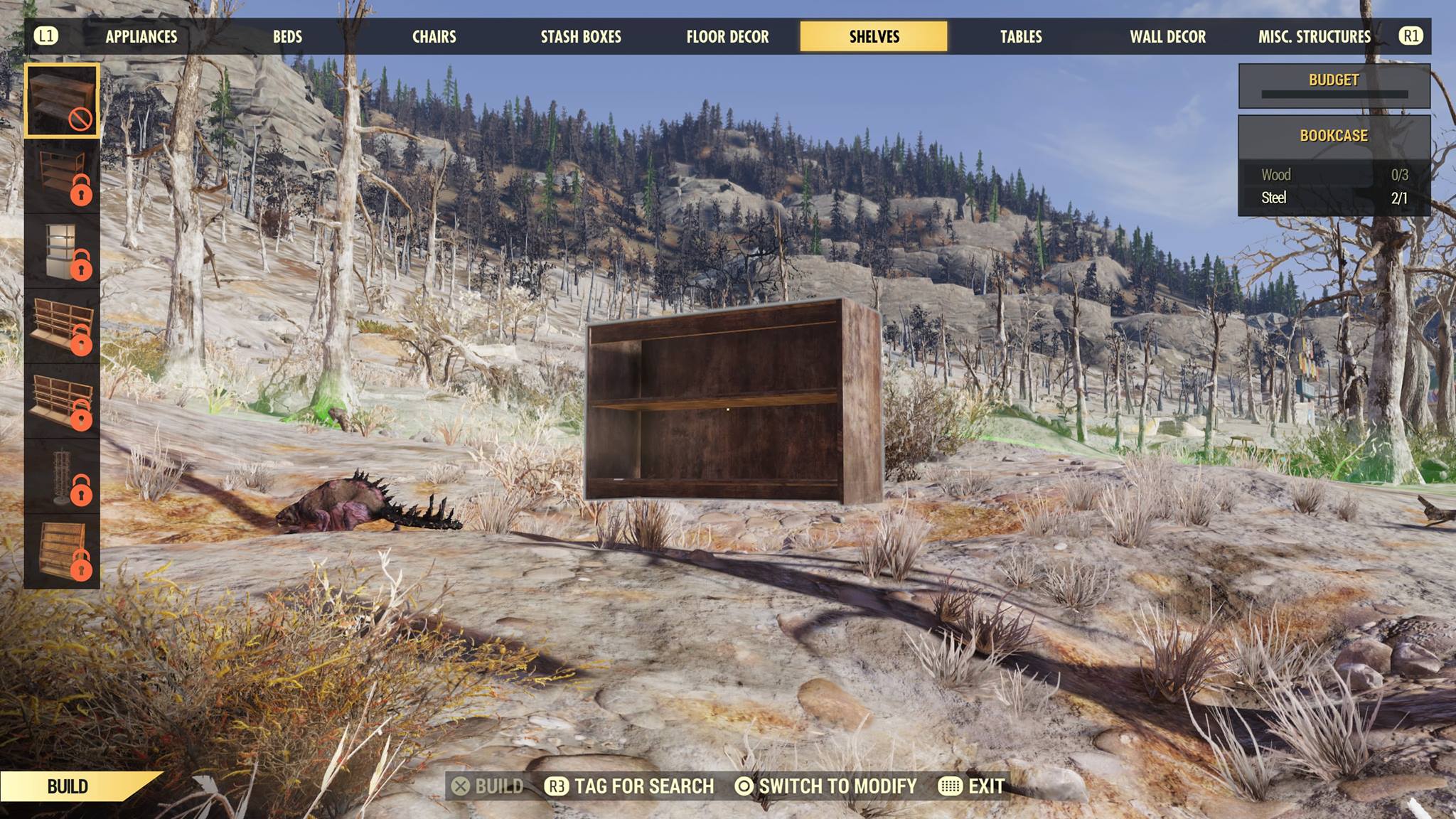 Fallout 76 strives to be both a single player experience and online multiplayer game, and due to the concessions it makes to achieve this, ends up falling short in both objectives. Some of the ideas are interesting in theory, such as the lack of NPCs giving the wasteland an unsettling quality, but also makes for boring story missions. The overall result is a game that has some interesting ideas that don’t come together in an enjoyable or meaningful way. There is some enjoyment to be had though most of that would come from just exploring the game world or playing interior designer using the CAMP station, which feels way less meaningful than the settlement building aspect of Fallout 4. Fallout 76 tried to take the series in a new direction, and while Bethesda has done great things with the franchise in the past, this ultimately feels like a misstep. Fallout has always excelled as a single player experience, so hopefully we can see a proper Fallout 5 in the near future.