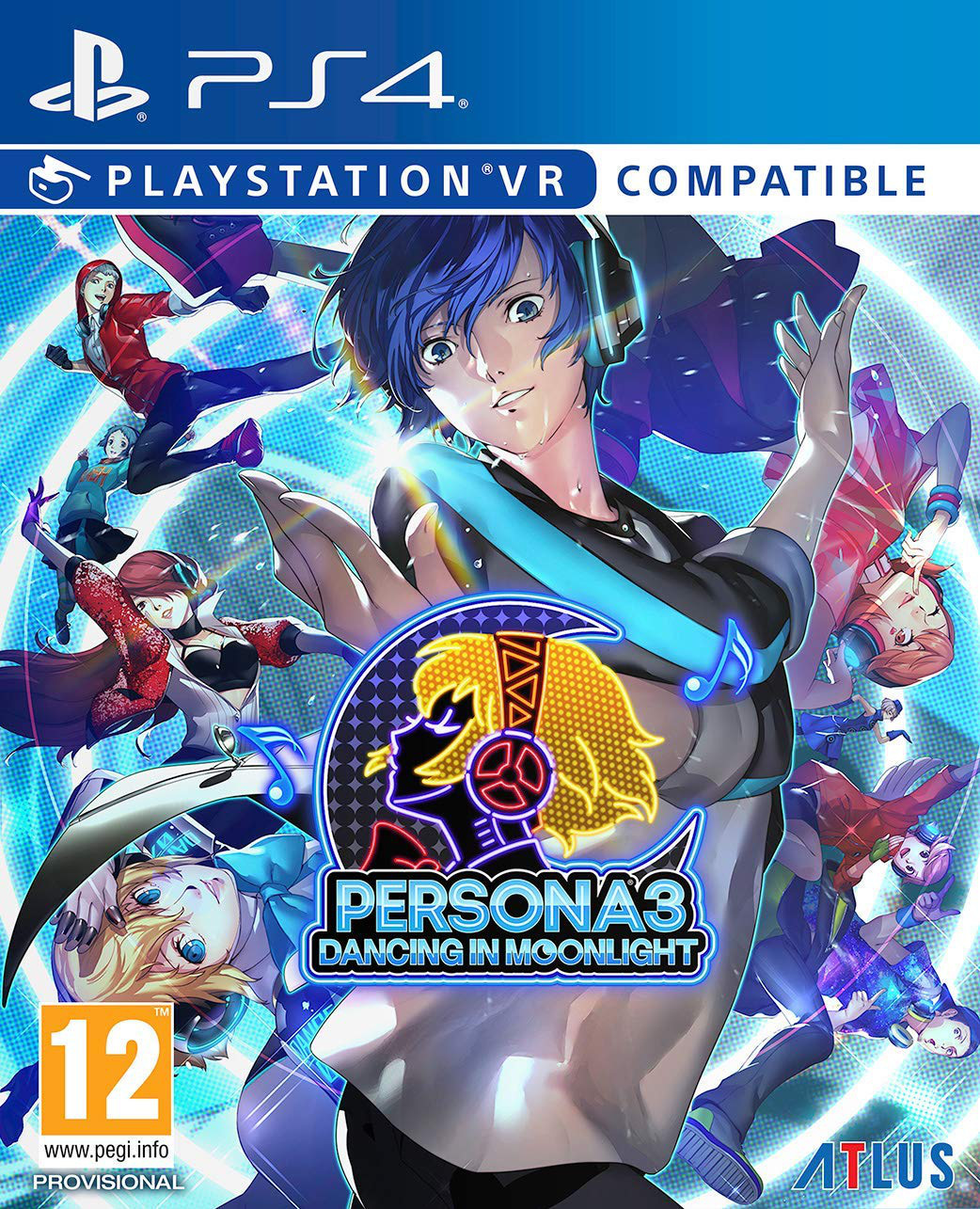 It’s been a long time since the last Persona 3 game was released, about 11 years ago to be exact. That’s plenty of time for a game to be forgotten by all but its most dedicated fans, and time enough for its developer to consider the game dead and buried. Yet, here we are with Persona 3: Dancing in Moonlight anyway. That’s right, Makoto Yuki and the rest of SEES are finally back and they’re ready to dance their socks off. They’re unfortunately not getting the same treatment as Yu and his friends from Persona 4, but fans at least have the chance to see their favorite cast in a new light and get to know each member of SEES a little better.

Unlike Persona 4: Dancing All Night, Persona 3: Dancing in Moonlight doesn’t have a story. All it really has is an excuse for these characters to be singing and dancing. Instead, they’re loosely connected by the same instigating event. Elizabeth has summoned Yuki and the rest of SEES to the Velvet Room for a dancing competition in order for Yuki to claim the title of “most remarkable guest” Persona 4’s Yu because Margaret has been bragging about him. That’s really the long and short of it. SEES agrees to do it because Yuki is indebted to Elizabeth, and…that’s it. Just go out there, have fun dancing for the dream crowds and maybe learn a little more about each other along the way. Like its partner game, Persona 5: Dancing in Starlight, Persona 3: Dancing in Moonlight suffers a bit from smaller-than-average song list; there’s only about 25 in total. They’re all catchy and fun to play through, but this combined with the lack of a story just leaves one wanting more. With so much time having passed since fans got anything Persona 3-related, this is more than a little disappointing.

Gameplay in these newest Persona rhythm games is more or less the same as it was in Persona 4: Dancing All Night. As the song plays, notes appear and float over to their corresponding buttons. All the player needs to do is hit the correct buttons in time with the notes. Like any rhythm game, the sheer number of inputs can be overwhelming, but Persona 3: Dancing in Moonlight comes equipped with a robust tutorial. All one has to do is run through it once and they’ll be ready to dive into the game proper. 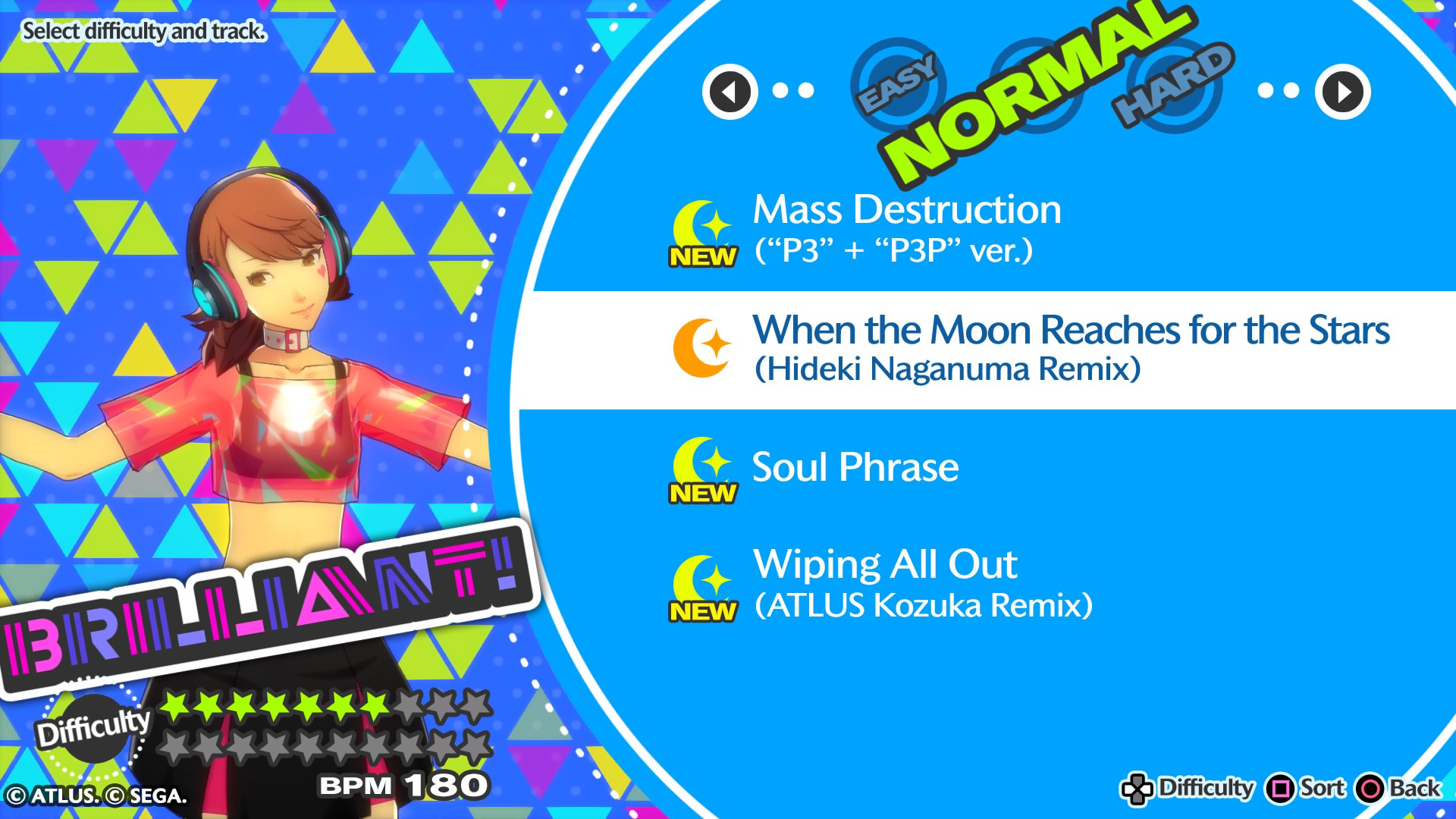 Persona 3: Dancing in Moonlight starts out with three difficulty levels for each song. Once they’ve completed most of the soundtrack on “normal” or better, “All Night” will be unlocked. This difficulty might as be renamed “master” mode though, as it’s only for those who’ve reached the pinnacle of their rhythmic skills. Not only is it faster overall, but it introduces many brand new note combinations that are sure to bamboozle those who aren’t prepared. SEES may have overcome the terrors of the “Dark Hour,” but this may indeed wind up being their greatest challenge. They aren’t without help though, as there’s plenty of modifiers available to make the job a bit easier

Instead of having to buy items to adjust songs, players can just toggle support and challenge modifiers on and off as they wish. As the name implies support modifiers make clearing a song easier at the cost of one’s overall score; challenge modifiers do the exact opposite and are best used to liven things up once one gets confident in their skills. These all have to be unlocked before they can be used, but they’re easy to come by for the most part. A couple are even unlocked just by playing all the way through the tutorial. There’s no lasting drawback to using them, so don’t be afraid to throw a couple on if transitioning to a higher difficulty is proving troublesome. 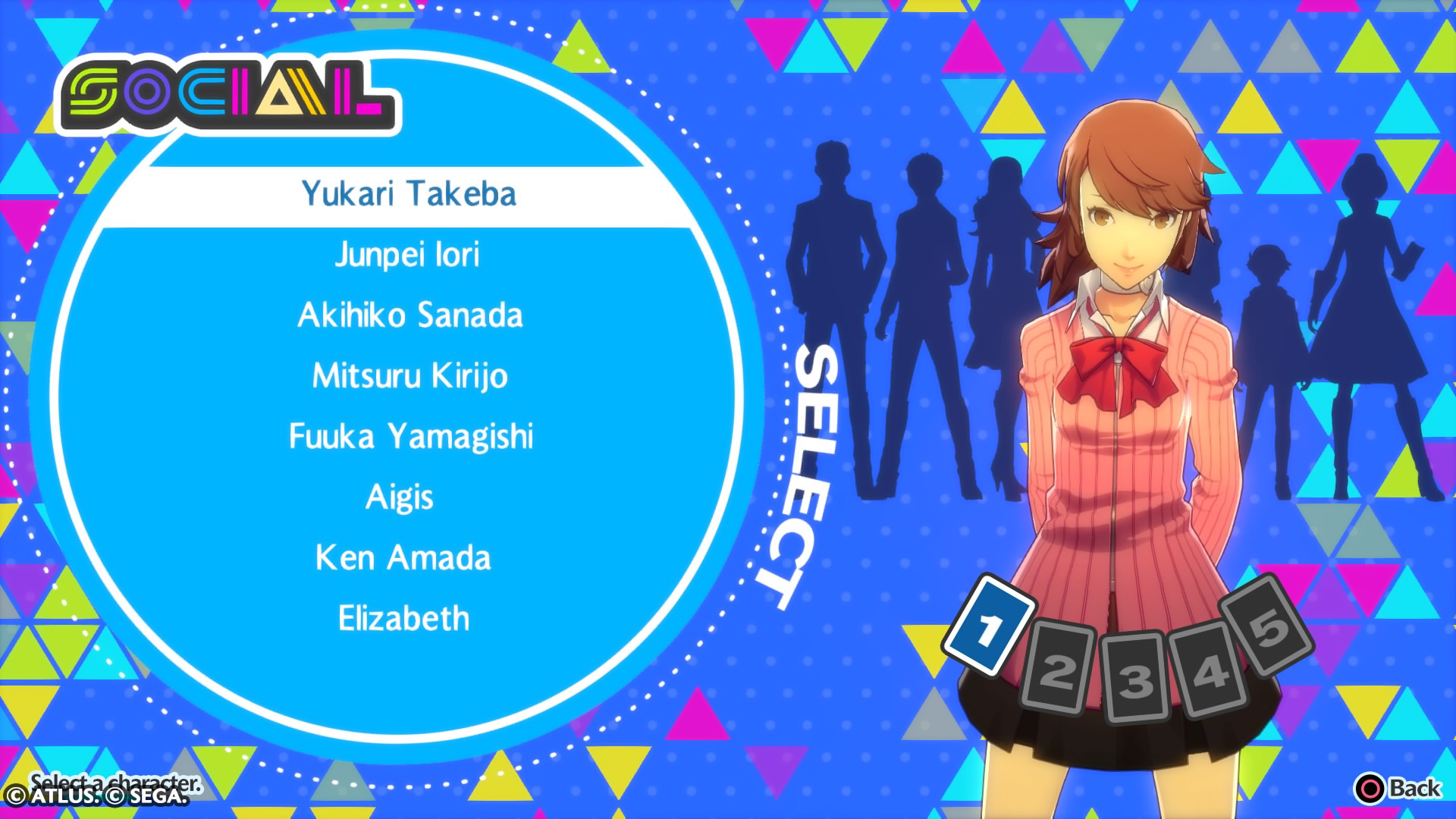 Beyond simply enjoying the gameplay, unlocking each SEES member’s social events will be the main drive to keep playing through Persona 3: Dancing in Moonlight’s song list. They’re all little more than unrelated conversations, but fans will likely enjoy them as a chance to learn more about their favorite SEES member. They obviously won’t mean as much to Persona fans who’ve only played Persona 4 or 5, but this might be enough to drive some to actually playing Persona 3. It would have been nice if these amounted to more than idle chit-chat and a room exploration mini-game, but it’s at least something.

Persona 3: Dancing in Moonlight character customization system on the other hand is much more robust. Players can dress up SEES in everything from their normal attire to outfits that they’d likely never wear in a million years outside of the dream world. There are plenty of accessories to unlock and choose from, and each character has their own set of outfits. They don’t react to them at all aside from a quick quip, but fans who enjoy this kind of thing should have a lot of fun seeing their favorites do their dance routines in these outlandish outfits.

There is online functionality, but it’s limited to leaderboards. One can go in and look at a person’s score details, but that’s it; no watching a recording of their song and seeing how they chose to dress up the characters. The VR functionality is even more limited. It basically allows one to look at a static character in a 3D space and that’s it. Otherwise VR just makes the game harder by making the player turn their head to see the full display. Don’t bother with it. 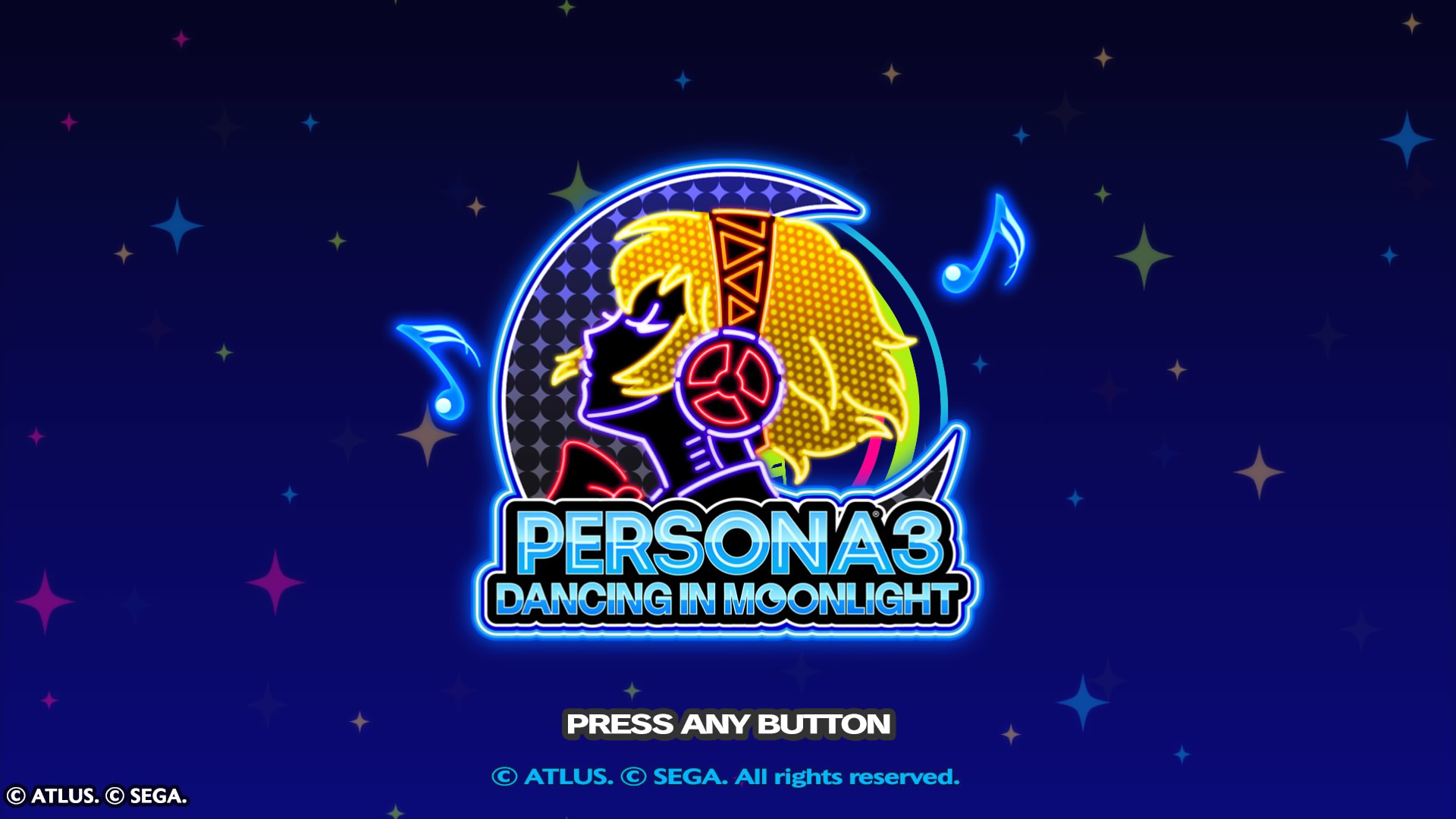 Persona 3: Dancing in Moonlight makes for a decent rhythm game overall, despite a relatively small song list and the lack of a story. Its gameplay hits that “easy to learn, but difficult to master” sweet spot and it’s easy to pick up for even a complete novice. Each song offers a slightly different experience from the rest and completing them always feels satisfying no matter the difficulty it’s played on. Spending time with the members of SEES is enjoyable for Persona 3 fans, but they’ll likely wish they’d gotten a story instead. It’s also nice that P-Studio thought to include Online and VR functions, but their bare bones implementation almost leaves one wondering why they bothered at all. In the end, though, it’s the gameplay and music that’s king here, and both together make for a very enjoyable experience. It’s not worth the for $60 price tag for non-Persona 3 fans, but is worth trying after a price drop.