Playing arcade quality fighters in the comfort of one’s own home has been an enjoyable pastime ever since the first Street Fighter II found its way home to the SNES. The buttons needed to reconfigure to match the controller layout compared to an arcade cabinet, but it got the job done, and being able to play these games without having to deal with crowds of people and constantly feeding the machine tokens was a huge benefit. Even so, this type of game just feels more natural on a proper arcade layout. With the recent release of Soulcalibur VI, Qanba has released the limited edition Soulcalibur VI Obsidian Arcade Joystick, which features original illustrated Soulcalibur VI artwork with the arcade-style joystick and eight button layout.

The Soulcalibur VI Obsidian Arcade Joystick features a Sanwa Denshi 8-way lever joystick and Sanwa Denshi push buttons, which looks and feels like playing on an actual arcade machine. This arcade stick is corded with a USB cable that is just shy of nine feet (2.7 m) so the player isn’t tethered too close to their TV. This joystick is compatible with PC, PlayStation 4 and PlayStation 3, and for PlayStation 4 users, the touch pad is located on the back of the unit. There is a 3.5mm headphone jack so players without a preferred wired headset won’t have to go without. This joystick is rather hefty, weighing in at about seven pounds (three kilograms) and measuring 18″ x 10″ x 5″ (461 mm x 266 mm x 121 mm).

Each of the buttons can be programmed into three different turbo modes that can be toggled rather easily (instructions included with joystick), which are turbo off, push button for turbo and an auto turbo setting. The PlayStation 4 controller is known for its constant glow and there are four different glow settings that can be done with the LED switch. The settings range from an orange glow when the buttons or joystick are used, a green glow that flashes in place of the controller’s vibration, a constant blue glow or no glow at all, allowing the controller to emanate the darkness of Soul Edge. For Tournament Mode there is a lock switch that disables the Share button, Turbo mode, the PS button and the options button, making this stick compliant with most tournament rules. 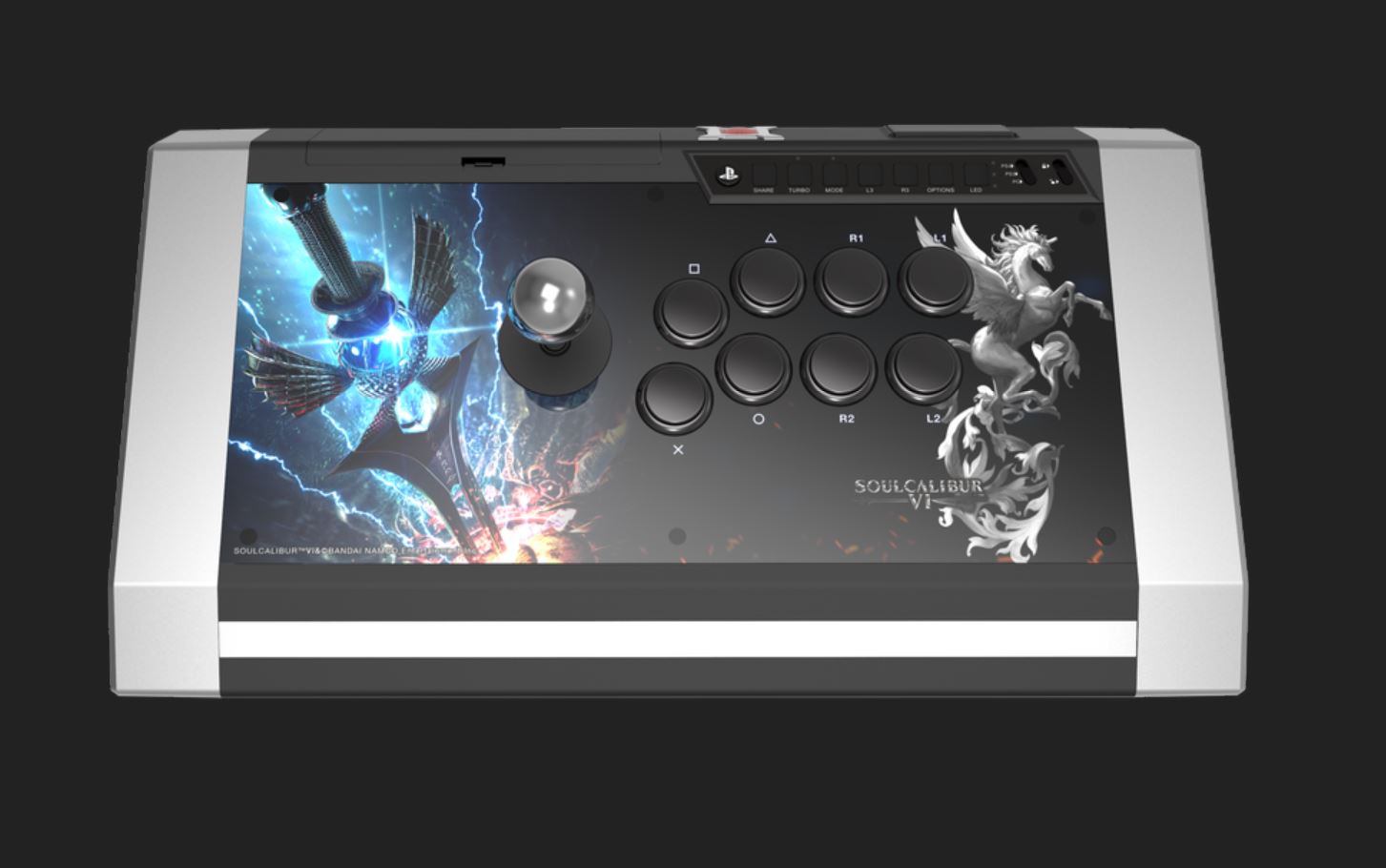 The Soulcalibur VI Obsidian Arcade Joystick plays like a dream. It’s not unwise to have suspicions about the quality when it comes to third-party hardware, but those were quickly laid to rest. Having played exclusively with a controller for a while now, it took some getting used to, but the old school arcade muscle memory came back quickly. I played Soulcalibur VI, Tekken 7 and Street Fighter V since all those games seem like they would benefit the most from an arcade button configuration and there are no complaints about the joystick’s performance across the games. Every move I wanted to execute was done with the greatest of ease, with no noticeable lag or other issues like the joystick getting stuck in a direction or buttons not responding. Playing fighting games with this feels natural. This unit could work with any type of game, but the layout doesn’t feel as comfortable for platformers or first-person shooters, but that shouldn’t be surprising since it’s designed for fighters. A nice feature about this is in the back of the joystick there is a compartment for neatly stowing away the USB cable.

Hardcore Gamer did have a chance to speak to Kaydie Hansen, the artist who worked with Qanba on designing the look of the joystick. In coming up with the design, she stated she wanted to stick with the Baroque visuals that Soulcalibur is known for along with including one of the legendary swords. She went with the Soul Calibur because it matches the blue LED lights of the stick and Siegfried’s crest to represent the two major sides of the Soulcalibur saga. She deliberately avoided using any character art because she wanted the stick to appeal to all Soulcalibur fans and not just catering to fans of a specific character. Even though the image is related to Siegfried, it doesn’t focus on him directly as a character and more on the overall tale of the legendary swords, Soul Edge and Soul Calibur. 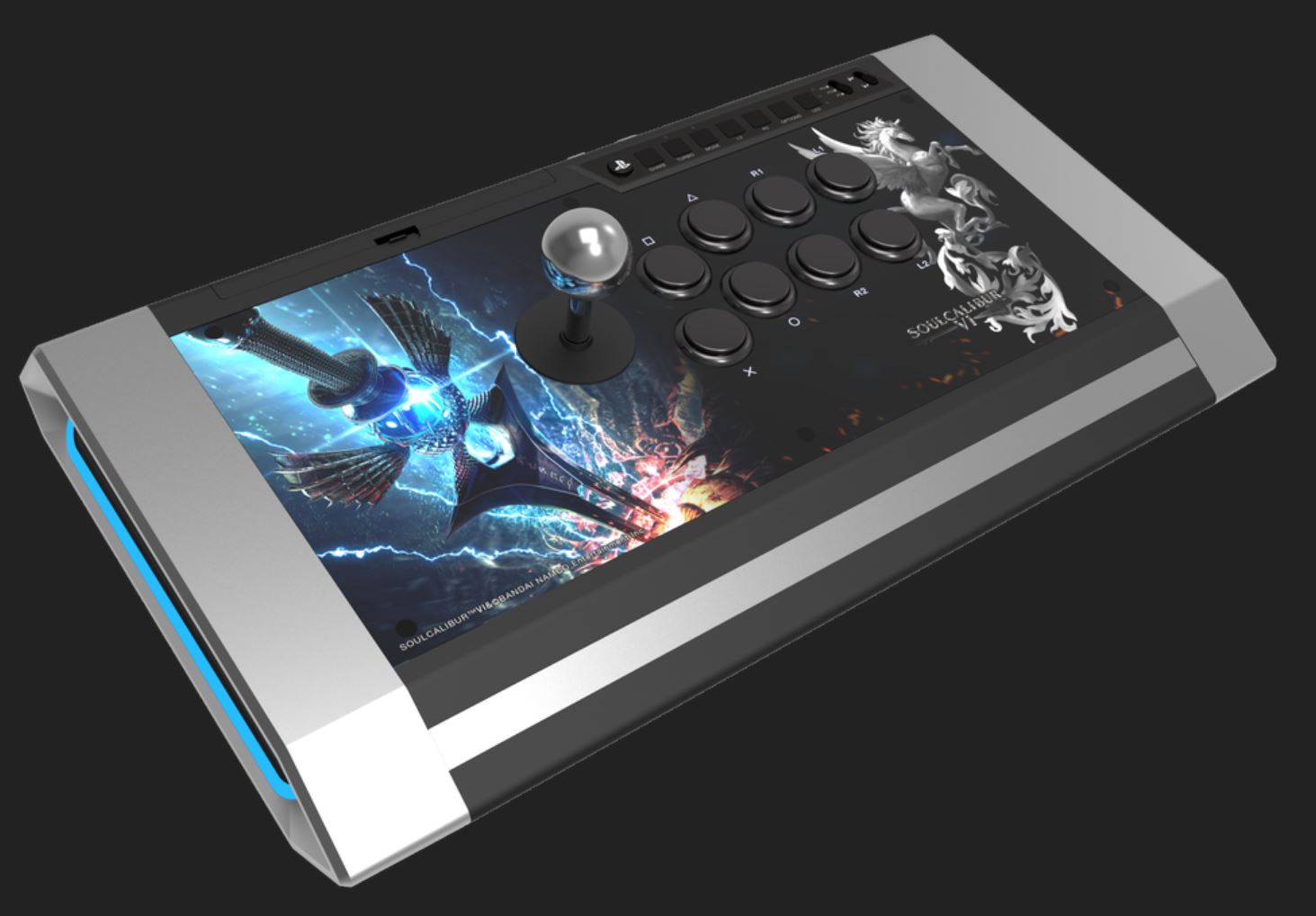 For traveling Qanba does offer the Aegis backpack that is designed for arcade joysticks, so naturally the Soulcalibur VI Obsidian Arcade Joystick fits perfectly. This backpack is designed for the arcade stick with reinforced stick guard in the main area and has a separate compartment for a laptop or tablet, and some mesh pockets for accessories and convenient side pockets for a water bottle. The backpack is on the slimmer side and it’s specifically designed to securely transport the arcade stick and tablets, making it ideal for bringing the arcade stick to a tournament or friend’s house, but might come up short for a couple days of traveling.

The Soulcalibur VI Obsidian Arcade Joystick is a fantastic way to bring the arcade feel to a home setting. The arcade stick not only feels and plays well, but its design is tasteful and attractive, appealing to fans of Soulcalibur with the recognizable designs but is subtle enough where it looks like it belongs with a sophisticated looking gaming setup. By nature of its design, it’s best suited for fighting games, so this may be an unnecessary luxury for casual fighting fans, but this is a highly-recommended item for those who can’t get enough of tournament fighters.