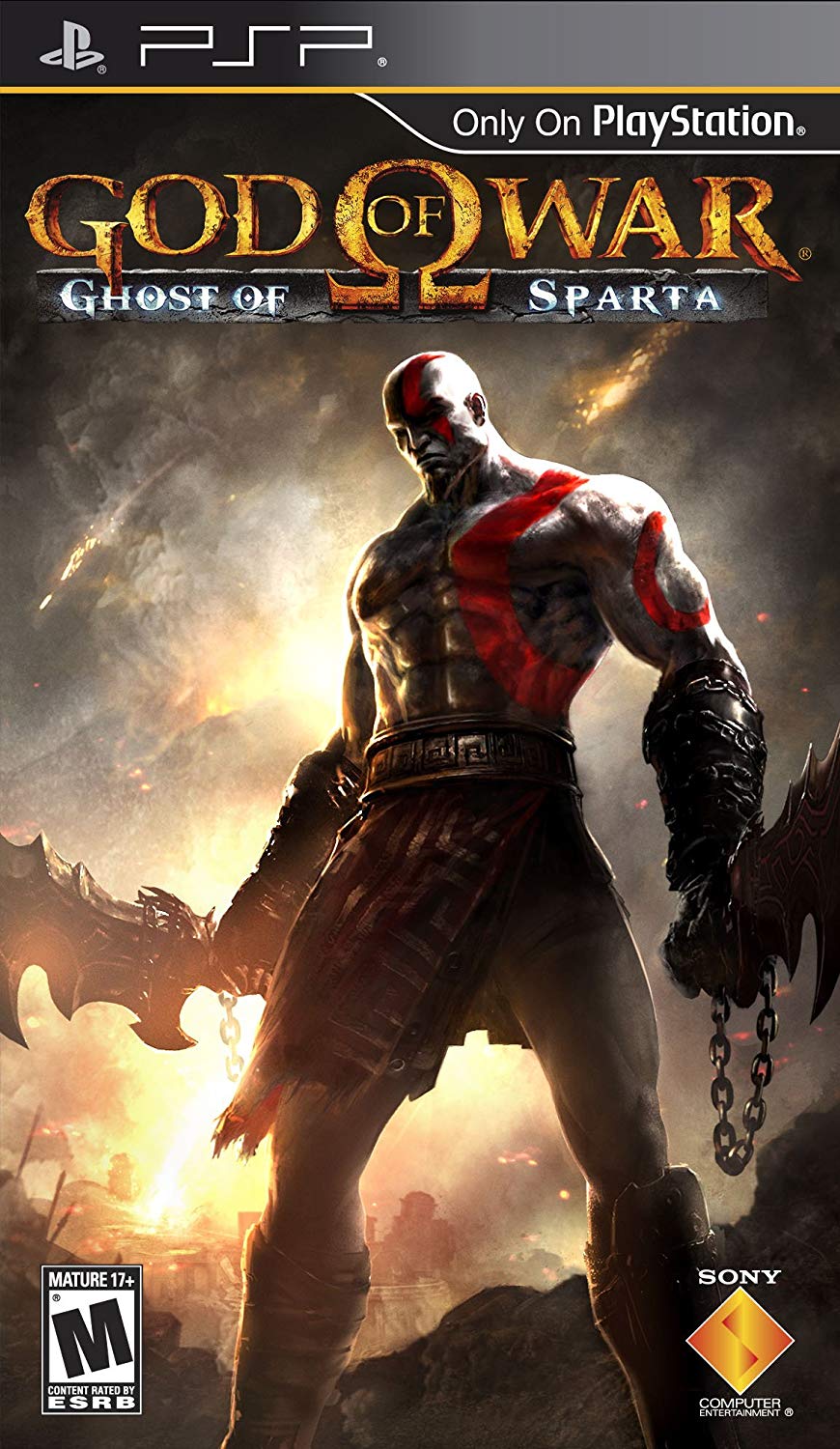 In order to make the PSP a real competitor in the Nintendo dominated handheld market, Sony needed some top shelf exclusive titles. God of War was always too popular of a franchise to be confined to just a single platform trilogy, and Kratos was just the god to face off against Mario, Link and Pikachu. After Kratos has proven that his larger-than-life adventures can adequately be presented in a pocket size format with God of War: Chains of Olympus, Kratos returned for another side story. The main trilogy had concluded earlier in 2010 with a fitting climax in God of War III, but there were still a few mythic figures that had not yet been slain by the Blades of Chaos. They will meet their end in God of War: Ghost of Sparta and there was much rejoicing among PSP owners.

God of War: Ghost of Sparta takes place between God of War and God of War II, or more specifically between God of War and God of War: Betrayal if anyone has played that. Kratos has earned his place among the gods in Mount Olympus but as in the previous games he is still partially living in the past, haunted by visions of his life when he was a mortal Spartan. Kratos really needs to learn how to live in the present moment and could benefit from some extensive therapy, but unfortunately Sigmund Freud would not be born until several centuries later so Kratos will continue to cope with past trauma by committing mass deicide against the Greek pantheon.

When God of War: Chains of Olympus was first announced I was apprehensive about how God of War would translate to the handheld format. Ghost of Sparta had a different reservation, which was living up to the legacy of Chains of Olympus. At this point there weren’t too many big names in mythology left for Kratos to kill but they did manage to scrape up a few noteworthy opponents. The gameplay was exactly what God of War veterans would expect and just like its predecessor found a way to make do with just one thumbstick. Ghost of Sparta was slightly bigger than Chains of Olympus, taking about five hours to beat compared to the four hours needed to put an end to Morpheus’s blanket of darkness over Greece. 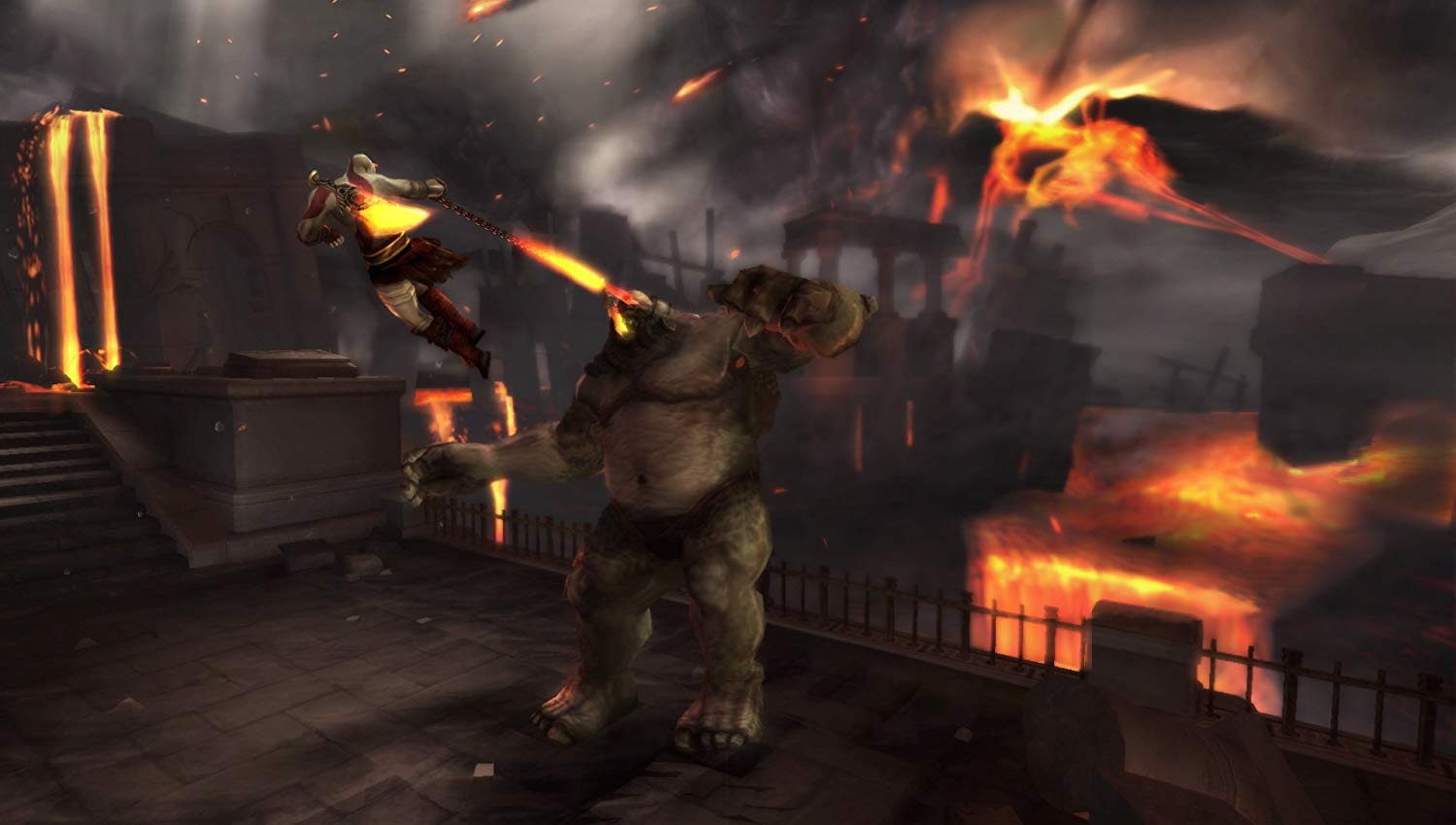 In ancient Greece people would use oracles to try to predict the future. The predictions of the oracles were usually spot on, but the interpretation tended to muck up some of the details which could lead to hilarious and disastrous results. This was one of those cases. The oracle revealed the death of the gods, and thanks to the unusual birthmarks on Kratos’s brother Deimos Ares ended up capturing and imprisoning Deimos. To honor his brother, Kratos ended up getting his brother’s birthmark tattooed on himself, thus explaining that odd red stripe he’s always had. The fun thing about predictions such as this is the misinterpretation is what led to it becoming true. Had Ares and Zeus not mistaken the identity of the god slayer, Kratos would have never got the red tattoo and may not have ever gone in search of Pandora’s box to kill and usurp Ares. Zeus and Ares could have heard the prediction, decided that it was a trap and left the Kratos and Deimos boys alone. If the gods only had some critical thinking skills when it comes to dealing with psychics these seven games may have never existed.

Kratos ends up taking a trip to the temple of Poseidon in Atlantis where he has an unfortunate run in with the monster Scylla whom he naturally has to kill. Once Kratos reaches the temple he encounters his mother Castillo, who as luck would have it transforms into a monster who Kratos has to kill. Before she dies, her lucidity returns and she tells Kratos to go to Sparta to look for his brother Deimos. She also tries to tell him who his father is, but in a soap opera worthy cliffhanger moment this tidbit of information is not revealed, though if you play the games in the order that they were released and not in the story chronological order you already know who that is. On the way to Sparta we have the expected events from a God of War game, encounters with titans, citizens still loyal to Ares, a volcanic eruption and ornery lion. 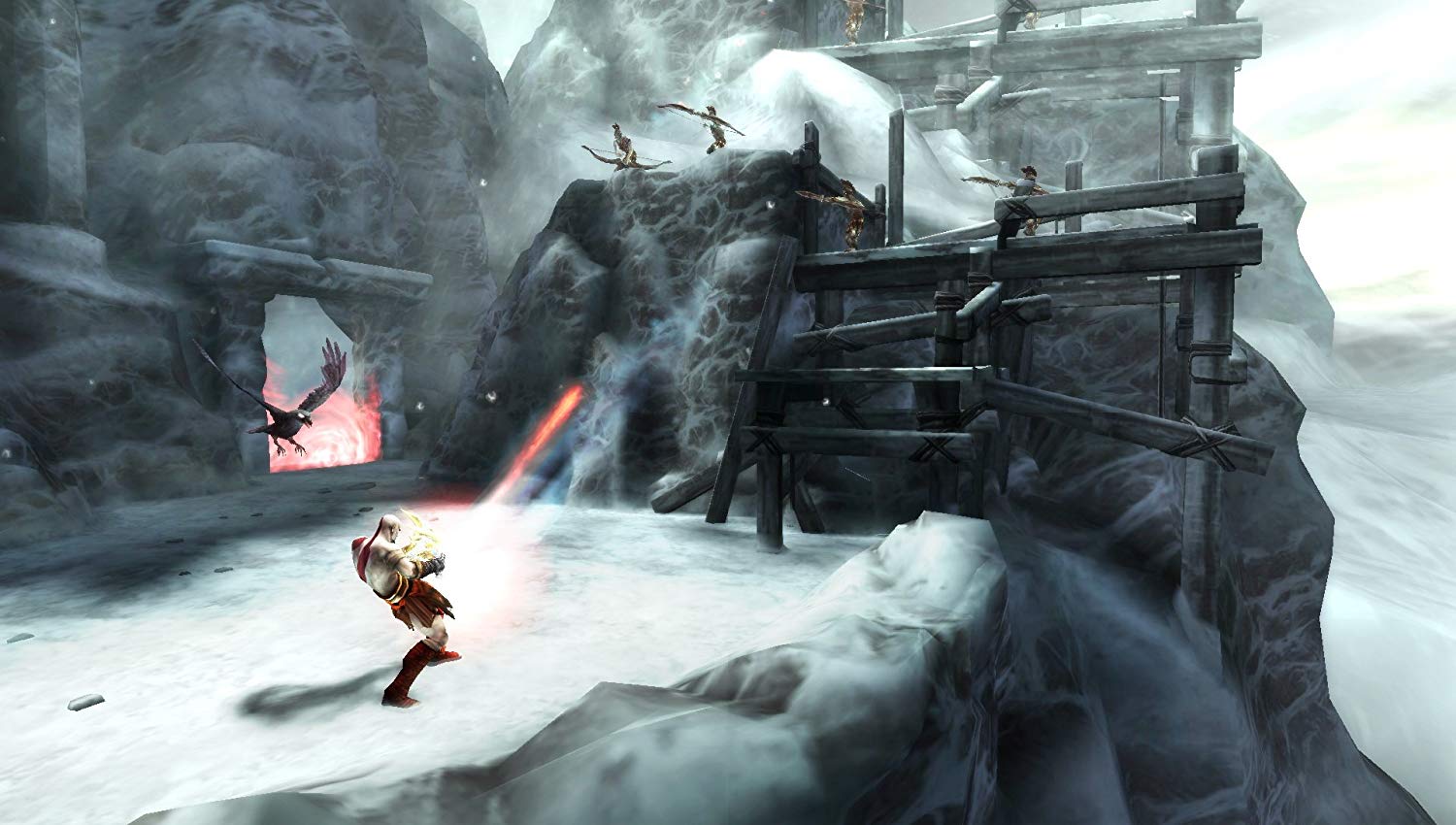 Throughout the God of War games, Kratos’ story and family arc continues to expand and become ever more tragic. This approach to telling his story is inspired by the Greek myths and tragedies where the most horrible situations are inflicted on people, often times due to their own hubris. This is very true of Kratos, who’s life exists of nothing more than a constant battle where he tragically murders most of his family members with only the rare sex minigame to offer any kind of reprieve. A more disturbing fan theory I have come across is that Kratos is schizophrenic. Kratos was a mortal who became a god later in life and this represents his life before and after his diagnosis. Deimos was his brother, who died in some accident when they were children. Kratos grew up and started to live a normal life before he lost control of rational mind. Kratos committed the murder of family and was committed to a psychiatric institution. He suffers from the delusion that he is the god and the events in the game are how he recounts the events of his life when he talks to his doctors.

On a technical level, Ghost of Sparta is one of the most impressive titles available on the PSP. Chains of Olympus proved that a PlayStation 2 caliber adventure can be crammed into the handheld device while Ghost of Sparta exceeds what was done in its predecessor. The scope of Greece reaches the bar set by the previous God of War installments. Games such as this make me sad that the Vita is essentially a dead console, as side stories based on the 2018 God of War would have made great additions to the Vita’s library. 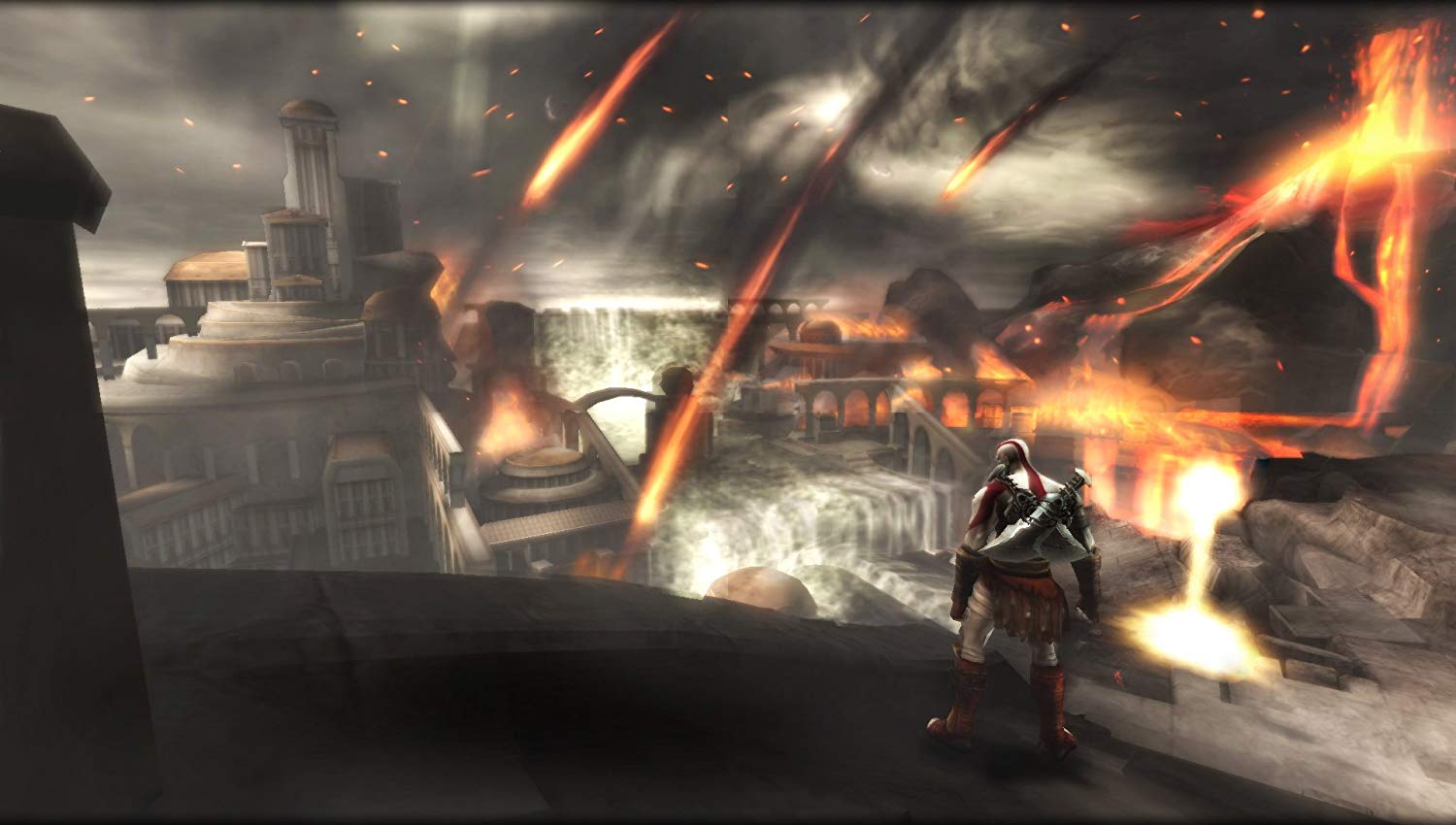 God of War: Ghost of Sparta is a bit of a weird entry in the series. Like its handheld predecessor, it’s a side story to the trilogy but feels like it just as important of an entry as any of the console titles. It’s easy to write off Kratos as a one-dimensional killing machine in need of anger management classes, but the story with Deimos and Calliope help bring light to the Ghost of Sparta’s human side. Throughout the trilogy and the handheld adventures we gather information about Kratos’s past. A Spartan trained to dominate the battlefield with such a tragic family history is naturally more likely to eviscerate someone than use I statements for conflict resolution. By the end of God of War III Kratos has dealt with his past, largely by removing reminders of it by killing all the gods and anyone else whose name has been in a Greek mythology textbook. He gets a new start in Scandinavia where he gets another shot at fatherhood, but as Boy will tell you the more sensitive Dad of War hasn’t exactly gone soft. The finale of the Greek God of War happened a few months prior to the release of Ghost of Sparta, but this was good supplemental material to the saga and one of the best PSP titles available and is also available on PlayStation 3 in HD in God of War: Origins Collection.