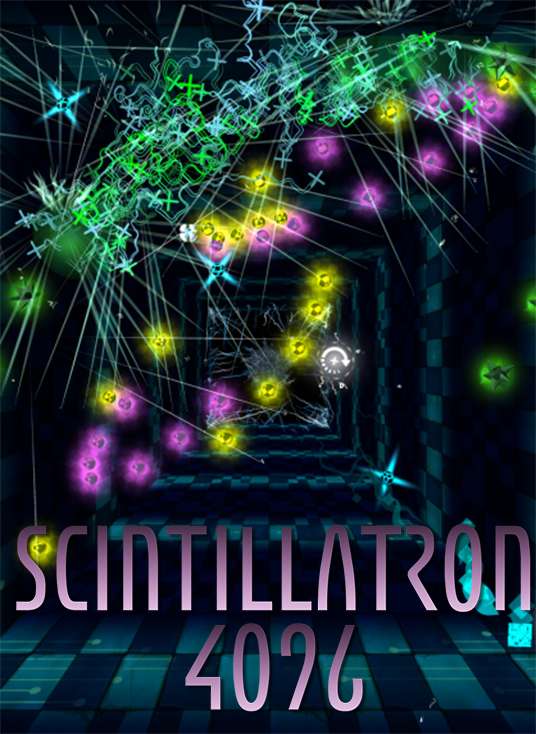 Arcade shooters generally leave the need for precision to the elite players who have put in the practice to know exactly what enemy will show up and when. While certain games tend to start out with a tiny single-shot popgun, that’s usually temporary until the first power-up arrives shortly after beginning the game.  Even the most humble beginning tends to become about the joys of overwhelming force versus overwhelming numbers, with precision being a tool only needed for high-end score chasing. It’s a standard formula that pays off nicely, but not one Scintillatron 4096 has any need of.

Scintillatron 4096 is a precision arena shooter where the player’s firepower is like wielding a scalpel rather than a hurricane. The object of each level is to create as large a combo as possible, chaining enemies of like color until there’s none left and then moving on to the next batch. In level 1, for example, you’ve got slow-moving yellow orbs and faster pink ones, all tracking the player, and the trick is to lure the pink ones out from the cluster of yellow before sending a single laser shot to kill just the enemy you want. Once all the pinks are gone you can fire with wild abandon at the remaining yellow, but until that point it’s important to choose targets carefully.

It’s not like you’ll die if you hit the wrong enemy, of course. You can probably clear the levels easily if you don’t care about score, but a fast-clear bonus is nowhere near as impressive as what you’d earn from the full-chain combo. If an aspect of the game isn’t subtly pointing towards the importance of score, it’s only because it’s waving a blinking neon sign with giant flaming letters instead. 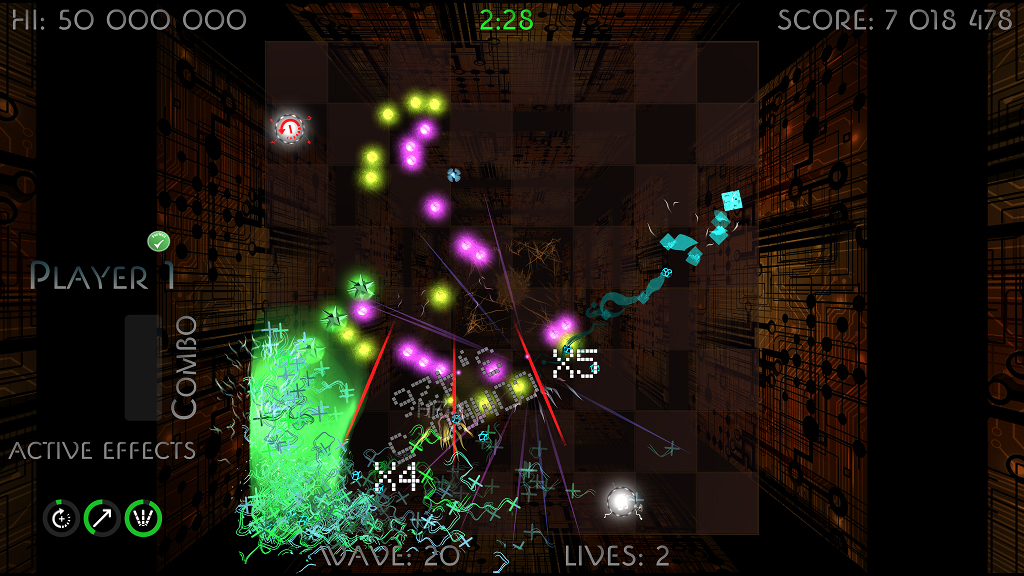 It takes a bit of adjustment to get used to this type of play, but the tools are there to make it work. The player moves notably faster than the standard enemies and can use this to lead the ones you want to target out of the pack. The player character is a ball with a plus sign embedded in it and that tiny bit of decoration is perfect for lining up a shot. The twin-stick controls allow eight-way firing rather than the standard 360 degree angling, making it much easier to ping a single laser at an enemy in the middle of the pack. Years of Geometry Wars-style conventions are thrown away to make it easier for the player to be an agent of precision. Temptation to stray away from being careful is everywhere, though, most notably in the power-ups that appear around the arena. Faster firing is nice, especially when quick enemies that require multiple shots to dispatch show up. Triple shots or a piercing laser, on the other hand, are better saved for when the arena is trimmed down to a single type of enemy. There are also power-downs kicking around, thankfully glowing red to make them easier to avoid. Seeing as one breaks a personal rule of never reversing the controls for any reason whatsoever, period, or the controller goes through the wall while the console burns, it’s probably for the best they’re obvious.

Precision is a tricky thing, though. At the start it’s not so hard, and chaining the first couple of levels together flawlessly only takes a bit of practice. And then the faster spikey enemies appear, taking more shots to go down, and other indestructible enemies leave behind a multicolored trail of the smaller ones.  If you take too long a Hurry Up enemy appears, drifting around before charging full-speed at the player, making the final moments of the level a high-speed jousting match.  Exploding mines go down in a number of shots, killing you with a massive static discharge if you’re too close and ruining the combo if destroyed out of sequence.  Everything must be destroyed in order for the highest scoring, no exceptions.

This is also Scintillatron‘s major weakness, though.  It focuses so completely on the score-chase that there’s not much room for the pure joy of shooting, making the fun of blasting everything on screen something to do when you’ve accidentally screwed up a level and just want to clear it out of the way to move on to the next one.  The gameplay can get tense, of course, but it’s more about careful positioning to take the right shot while avoiding the number of enemies who are either aggressively trying to kill you or drifting into the line of fire.  One missed shot can destroy an entire level’s worth of shooting, turning what had been a challenge of careful target selection into wasted effort and making it feel like work rather than play.  When the score is clear about how poorly you’re playing it’s hard to enjoy the journey. 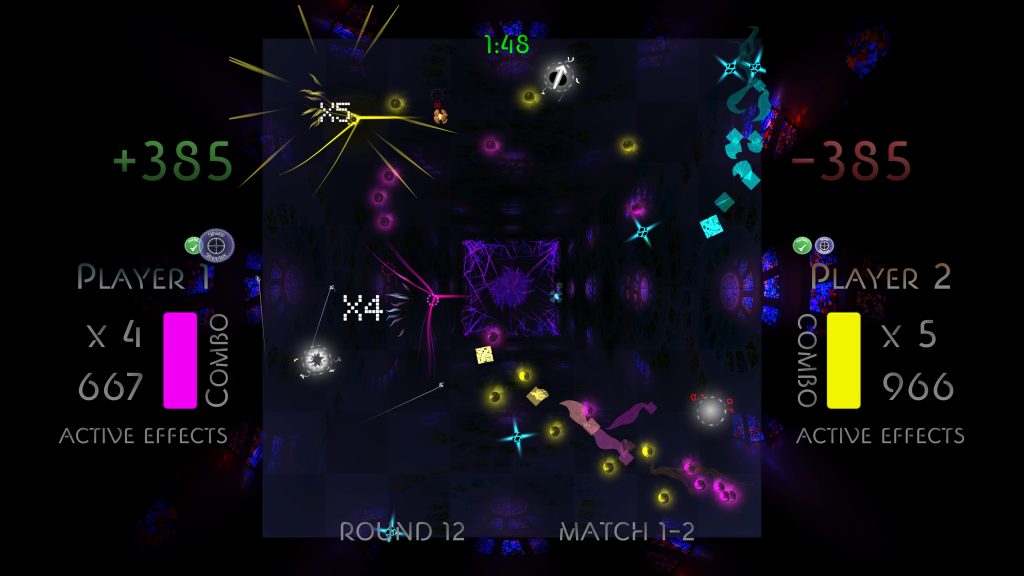 Scintillatron 4096 is a unique arena shooter.  It’s got all the shiny effects and abstract enemies you’d expect, but demands a very different style of play.  The deliberate target selection doesn’t mean it’s sedate by any means, but rather the fast-paced action needs to be more carefully planned.  Zipping in to nail a specific target, dodging out of a tight spot you could shoot your way out of if you don’t mind sacrificing the entire level’s scoring potential, then clearing out of the rest of an enemy type takes good reflexes and planning, and that extends to the selection of what the next threat to target will be.  You need to come up with a strategy on the fly and then stick with it, carrying it off to perfection to earn a decent score.  That’s Scintillatron 4096’s biggest strength and harshest weakness, because there’s no recovering a level from a single mistake.  When you can pull it off flawlessly, quickly and with style, though, the end-of-level bonuses make it all worthwhile.