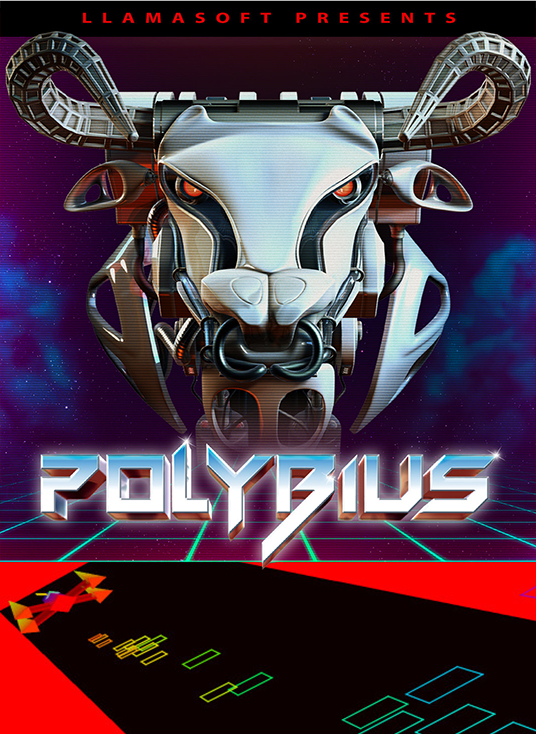 Myths and legends are overrated. Yes, great, Orpheus screwed himself by looking back on the way out of Hades and losing Eurydice forever, but maybe not every story built on that template has to end the same way? The tales of the past are an example, not a narrative prison, and that holds true for urban legends like Polybius as well. When Llamasoft’s Jeff Minter decided to create something new based on the myth of the brain-altering arcade game of the ’80s, he decided its feel-bad nature was an aspect that could be abandoned, and instead created a trippy, insane shooter that would be a frantic white-knuckle ride if it wasn’t near-paradoxically relaxing and uplifting.

The plot of Polybius is completely nonexistent, replaced with a setting and rules you learn as you go. An x-winged fighter soars just above a psychedelic checkerboard surface, height and speed locked in so you only need to concern yourself with lateral movement, with enemies and level elements dropping into place in the distance. The only instruction is “Do what comes naturally,” and if you’ve played a game in your life then that means “hold the fire button and steer.” The first level object you see is a couple of gently curved ox horns rising straight up from the flat surface, set just far enough to comfortably fly through, right in the path of the ship. Naturally you’ll want to fly straight through them and this is where Polybius begins.

Each gate is a speed boost, making the ship both fly and shoot faster, plus bumping up the bonus multiplier and even giving a 1/3-of-a-second shield of invulnerability. Initially, though, it’s all about the speed, with the other features taking several more levels before you’ll need to notice and take advantage of them. For the start of level one all you need to do is hold still and shoot things, watching as they shatter into their component polygons and an electronic voice rewards you with “perfect score!” And then it’s time to get moving and everything changes constantly. 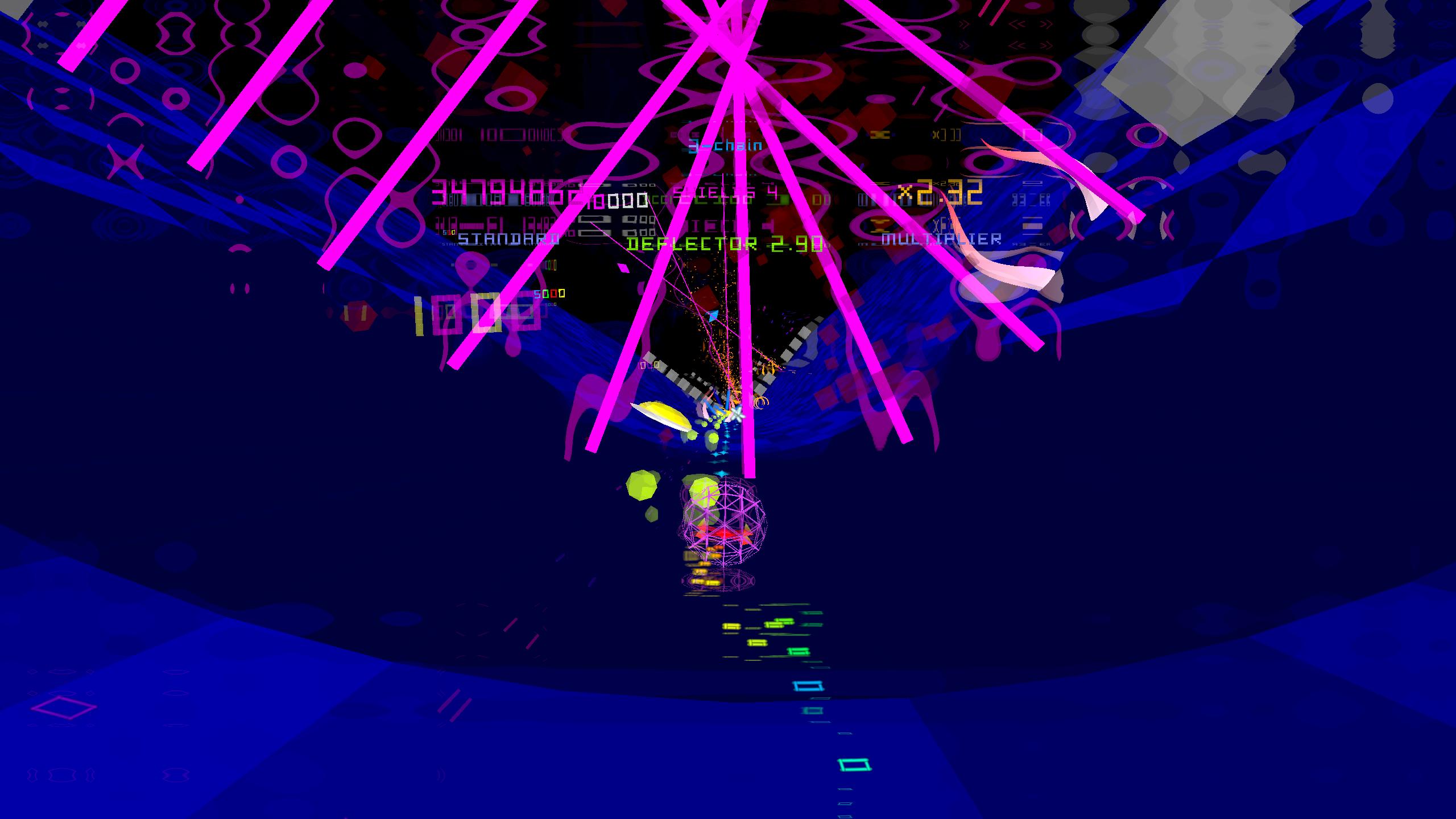 There were plenty of arcade games that were fairly similar one level to the next, but others kept introducing new elements with no explanation and assumed the player could keep up. For every Galaga (move left/right, shoot, the waves get faster but not different) there was a Moon Patrol (speed up and slow down, jump, there’s pits and rocks on the ground, enemies bobbling overhead, now there’s deadly flowers in the pits and where’d these mines come from!?). Polybius is very much from the latter school of game design, introducing new enemies, level traps and powerups on a regular basis. The standard powerups are giant pills you shoot to make them home in on you, granting abilities like a spread shot or extra-hyper speed, but there are plenty of other ways to dominate the course once you learn the tricks.

An enemy introduced in the early levels, for example, drops a giant circular bullet with a star in its center. Shoot the bullet and the star pops out, causing the remaining ring to hone in on your ship and grant the same speed boost you’d get from flying through a horn-gate. Another early level has massive red and blue slalom flags, and while it’s obvious you need to keep to the side the flag points what’s less clear is that, if you steer as close as possible to the pole, you again get a speed boost. Eventually you’ll even run across updrafts that launch the ship into the air and targeting various structures keeps the lift alive so the ground-based enemies can’t touch you. None of this is explained, but steering and shooting are simple enough actions that you’ll have just enough brainpower left to figure out the subtleties of each new mechanic. 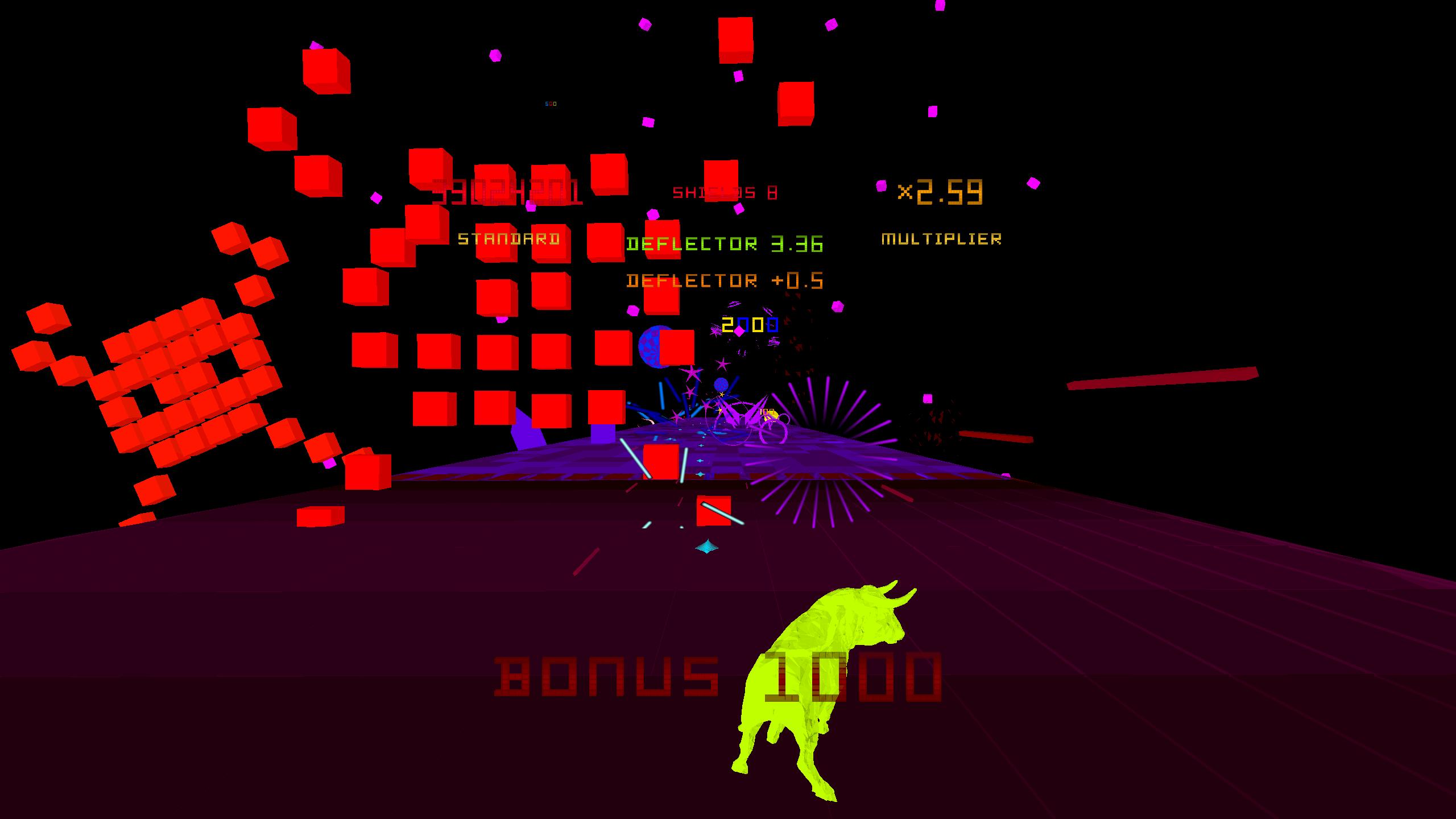 The thing about all these changes is that learning feels good and that’s one of the main points of Polybius. Flying crazy-fast over the ever-changing geometries of each new level, tearing through the madness as enemies rise up and pepper the screen, dodging unbreakable walls, aiming for the next set of gates and soaring cleanly through at max speed to send a pulse of energy undulating into the distance and clearing a good chunk of everything in the path, it all feels strangely zen until the next new element comes into play. Then there’s a bit of swearing, because that’s how video games work, until the new wrinkle is incorporated into your play style. Got a field of rising towers that make grumbling muttery sounds when destroyed or rolling balls that scream? There’s no gameplay mechanic to go with the sound effects, but it’s still almost impossible not to want to clear them all out. The fried eggs, glitch gates, bad pills and more, on the other hand, all have specific behaviors to keep you on your toes or take advantage of as the colors strobe by.

Every once in a while a new element becomes a wall rather than a toy, though. Hitting the updraft to glide is great when you make it, but if you miss one you can lose two to three shields depending on how many walls are in the way. Eventually you learn to keep an eye into the distance, because they’re generally obvious as the indicator drops into the level, but that’s not so useful when the course is on the outside of a tube and the thing you need to see is blocked by the landscape. There’s not a boss to be seen in Polybius (or any Llamasoft game, for that matter) but certain levels are massive difficulty spikes, practically guaranteed to whittle a full supply of nine shields down to almost nothing by the end, and it’s hard to feel like you weren’t punished by a gimmick when this happens. There’s a way through, of course, but it can be a complete mood-killer to get taken down by a thing you don’t understand.

The other major thing about Polybius is that it’s technically VR-compatible rather than required. It’s absolutely true that you can play the game on a standard 2D monitor, no need for a fancy headset. The viewpoint of being behind the ship rocketing is far better suited to the headset, though, and it makes a huge difference in judging distance.  It’s not so big a deal with shooting down enemies, due to most of them being relatively far away when you tag them, but the horn gates require a level of spatial awareness that’s very hard to get without help from a 3D display.  Having only a standard 2D monitor I can’t speak to how it would work on a 3D one, but sinking into a gaming trance of speed and firepower is much easier in VR. 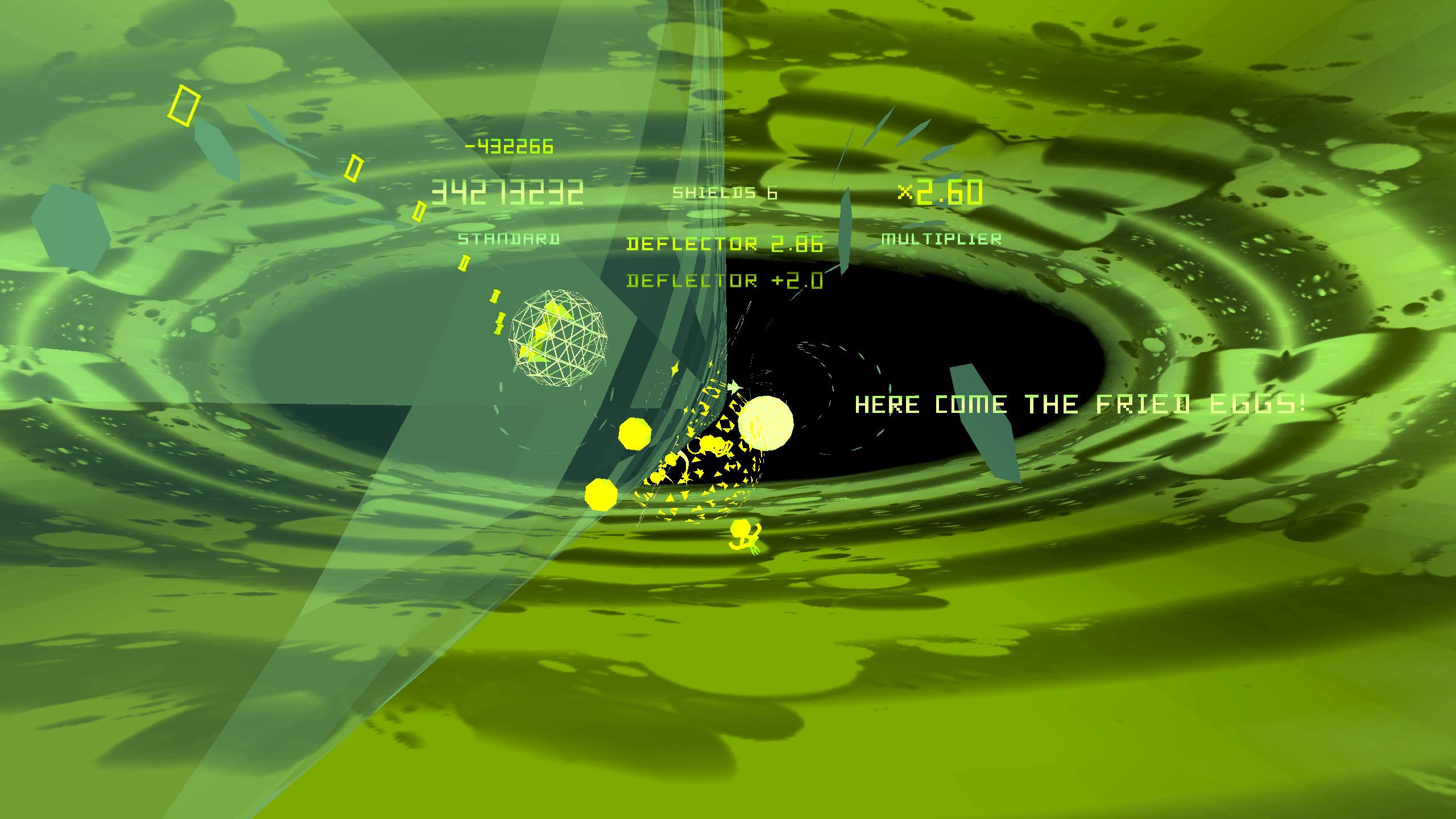 Polybius looks like a frenetic shooter that constantly has the player in a state of heightened tension, but the truly amazing thing about it is that it’s almost the complete opposite in actual play. The speed, colors and madness are just a light covering on a chilled experience that’s honestly relaxing once you sink into the zone. There were many times I was playing where I hadn’t the slightest idea where the ship was, but only knew that the enemies I wanted gone were being destroyed and every gate I targeted was sending a pulse into the distance as the level rocketed by at eye-warping speed. The legend of Polybius is about a mysterious game that breaks the mind of those who play it, but Llamasoft’s version is somehow exciting and relaxing at the same time, and the result is a shooter that leaves the player in a better mental space than when they began.