Personal computers are the dominant platform for any game requiring mouse and keyboard controls. It’s been that way for decades and will continue to reign supreme. It’s practically how everybody experienced hits such as Wolfenstein, DOOM, Unreal Tournament and the like back in the day. Nowadays, mega hits such as Fortnite and PUBG are taking over all the mice and keyboards. In more recent years, however, players have been fortunate enough to experience that same style of play on other consoles and a new product is on the market that will surely help expand things even further.

The GameSir VX AimSwitch is a mouse and keyboard combination perfectly set up to play with all current consoles. That means you will be able to use it on PC, Xbox One, PS4, PS3 and Switch. It sounds too good to be true but actually works smoothly with each. You receive a left side keyboard and mouse both being ergonomically designed and stylish. There is seemingly no lag when playing on any of the consoles especially when playing a game such as Fortnite. The AimSwitch can even be plugged in halfway during your game and pick right back up like there wasn’t even a swap from the regular controller. Every key can be configured to your own preference to make for a truly customized setting. A companion app can be downloaded to your mobile device in order to complete the configurations, but is simple to understand. You can even easily travel with the AimSwitch due to its small size when compared to other devices. Let’s say you are heading to a tournament, convention or friend’s place, this will get you back into the game wherever you go. 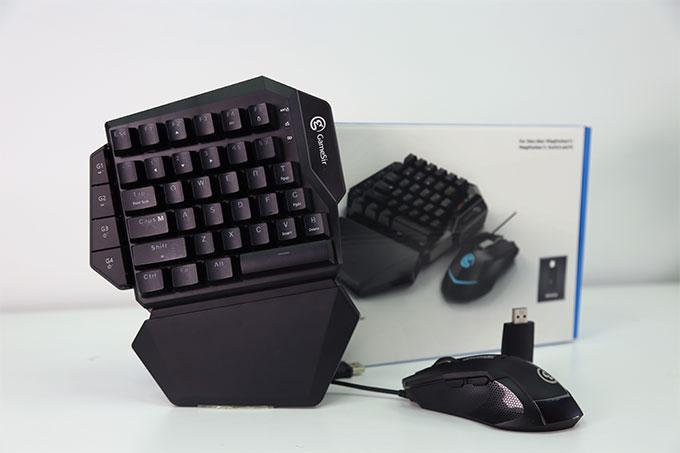 What makes this particular product perfect for gamers is its versatility. As previously mentioned, you can go back and forth between this and a controller with no problems and that also means plugging right in to play Call of Duty on Xbox One right after Fortnite on your PC is quick and easy. There’s also the matter of using it with the Switch. Many would think Nintendo doesn’t have its latest console built to handle this type of device, but it works out better than imagined. Honestly, moving around, jumping and shooting in Fortnite or Warframe doesn’t look or feel different from the PC. You could put them side by side in comparison and still not be able to tell. There are some games listed on the official website which make for a more perfect fit than others. That being said the AimSwitch is compatible with games such as Breath of the Wild, but it’s not going to feel as natural as the Switch’s Joy-Cons or Pro Controller. So, something like that is up to your own personal preference. Using the AimSwitch mouse and keyboard for consoles is going to give you an advantage online and that’s exactly the reason players should consider making the purchase.

So, while it does work well, it could take some getting used to and would make for a good backup should anything happen to your current Switch, Xbox or PlayStation controllers. It will mainly be geared towards those who want that classic first-person shooter quickness and aiming capabilities. Though the combination comes with a finely-built wired mouse, you can use wireless ones if you feel more comfortable doing so. This adds another layer of versatility to the product. Being able to mix and match with other peripherals is useful, especially with everything you can find on the market. It’s ready out of the box, though a short update may be needed to play various current titles. Even future games are already compatible; the website lists BioWare’s Anthem as being able to work with the AimSwitch, so there has to be even more on the way.

Overall, the AimSwitch is a quality piece of equipment. It’s satisfying in terms of appearance and control, and the keyboard even gives that pleasing clicking noise. GameSir is on the rise to deliver great products and the AimSwitch ranks up there. You can find this particular product for around or under $100.00 USD which is a good price point given how much use one can gain. You’ll get a lot out of this for all your consoles and then some.