There are many subtle indicators of a dysfunctional relationship, such as a lack of appreciation for the work one party puts in, an imbalance of power, or administering the time-altering drug Chronos to aid in secret blood-soaked assassination missions. That last one really should be a giant red flag, but anything can seem normal if it escalates slowly and goes on long enough. The unnamed samurai of Katana Zero and his therapist are not in anything resembling a healthy relationship, either personally or professionally, but the drugs keep flowing and the work gets done so so far, so good. Until everything spins madly out of control.

Katana Zero looks like a pure action game on the surface, but there’s a surprisingly strong narrative holding it all together. As a memory-deficient samurai with time-altering abilities, you’ll be killing a whole lot of people in pursuit of a target, but leave just one public highway littered with corpses and wreckage and all of a sudden your employers care about the body-count. The game starts with a ten-day countdown and everything mostly fine, but one event after another disturbs what had already been a fragile situation. The therapist is getting more disgruntled after every mission, the samurai is experiencing glitches in his perception, old memories are disturbing his sleep, and Chronos is attracting unwanted attention from the outside. It’s unstable and getting worse by the day, but there’s still work to do killing people in each new mission. 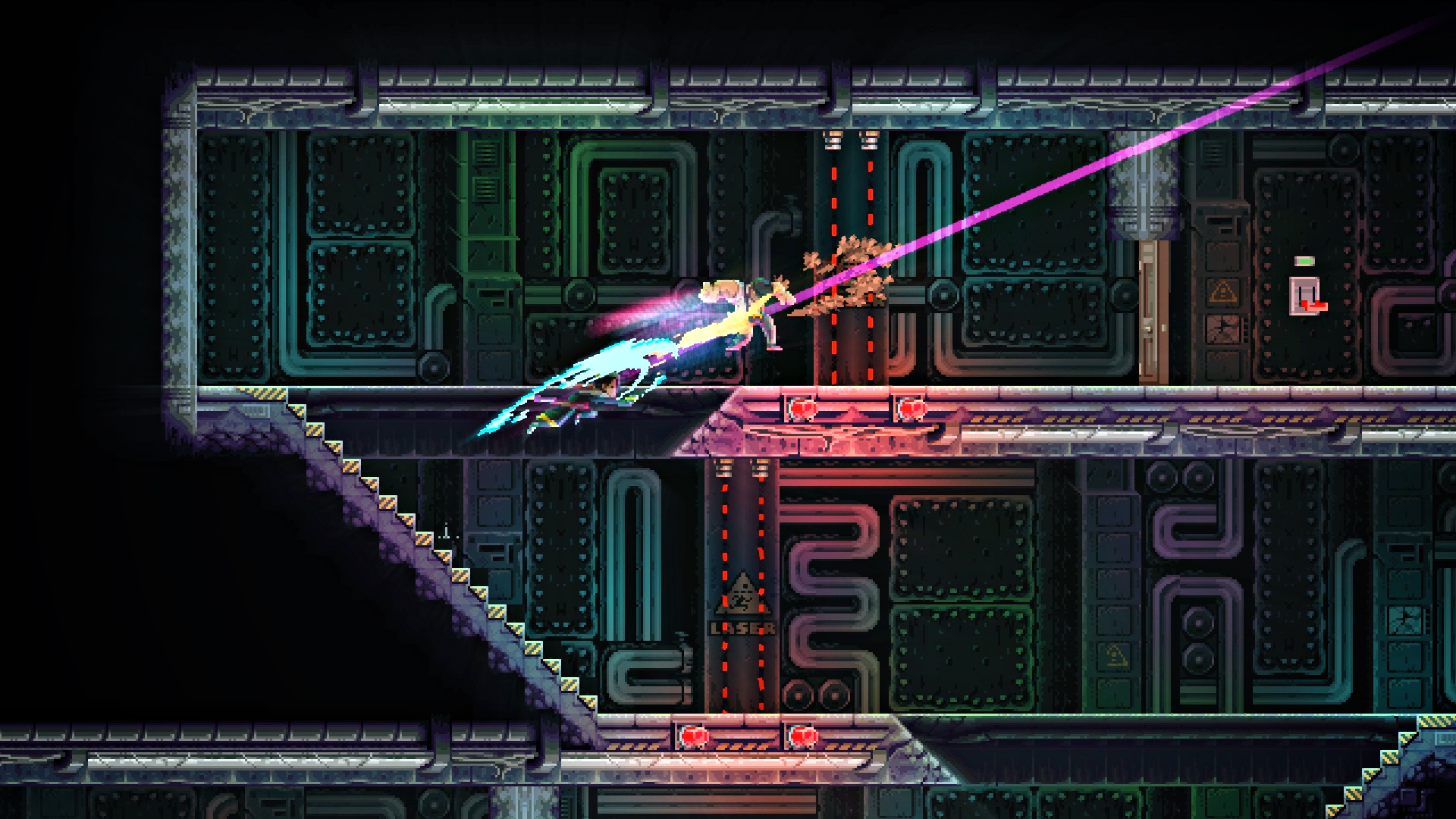 Each day’s target is given in a dossier that gives just enough info to tell where they are and no more, usually with instructions to leave no survivors and not to talk to the victim.  Seeing as you’re a samurai in a bathrobe rather than a well-trained dog that last command is easy to ignore and conversations either in-mission or between tend to have branching paths plus the opportunity to interrupt the speaker if you just want to move things along.  How you approach each situation determines the information you get from it, and there’s a lot of fun writing to be found exploring the different options.  Each day is a VCR tape you can access from the main menu, replaying to find hidden extras and explore the many ways things might have gone.  The feel of watching the action on a VCR is a theme throughout the entire game, which is appropriate seeing as so much of the powers granted by Chronos involve rewinding time.

As if being a pure badass samurai wasn’t enough, you also get powerful precog abilities that let you plan the attack perfectly before execution.  Each room has a number of guards wandering about and you’ll need to take them all down to proceed, but while they fall in a single hit so do you.  There’s only the single attack button which launches a lightning-fast sword strike in the direction of your choosing and to get the most out of it you’ll need to master the timing on the dodge roll and the Chronos-granted slow-mo ability.  When you hear the sound of a bullet it’s too late for slow motion to be much use, because bullets aren’t known for their patience, so you need to anticipate and know that the instant a guard sees you he’ll fire.  If you’re crazy-good you can send the bullet back where it came from without dropping into slow-mo, but for regular mortals it’s best to hold down the button and let the bullet gently drift into sword range instead.  You’ll want to use the dodge-roll on a shotgun blast, though, because there’s no practical way to hit all those pellets at once.  Each enemy has a number of possible tactics to use against them, and while the samurai’s move-set doesn’t seem particularly diverse on paper, there’s a ton of great action waiting for those who spend a little time putting together the possibilities. 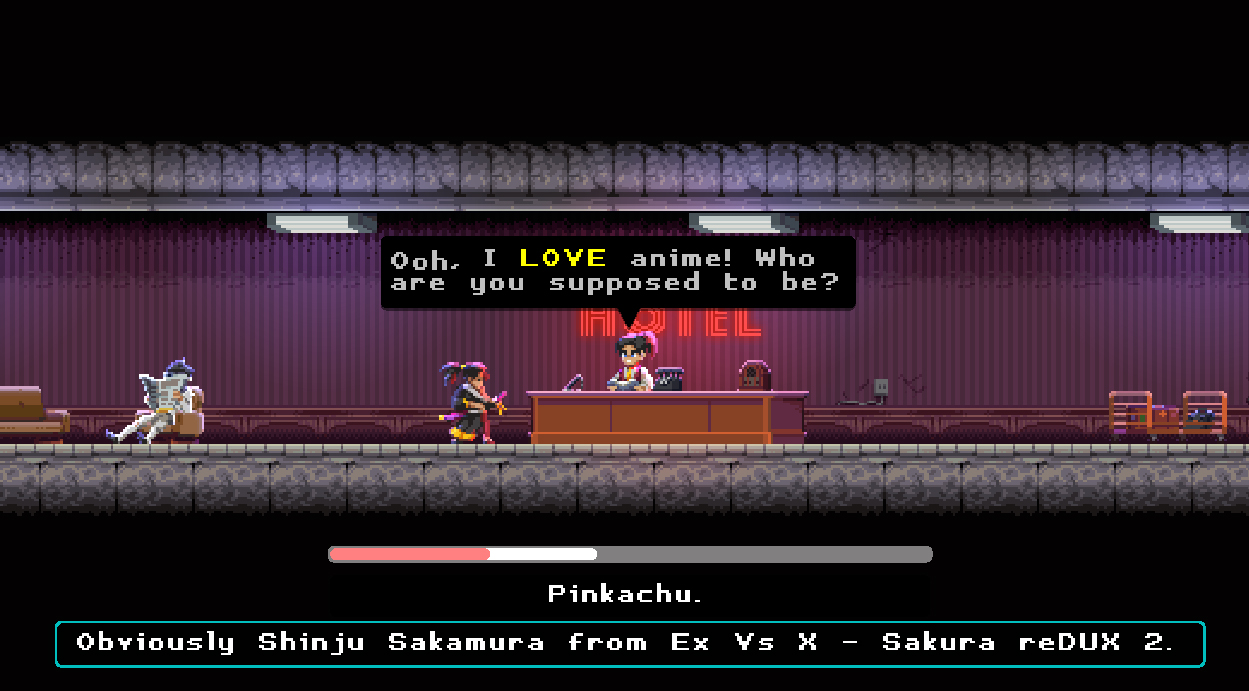 Experimentation is rewarded, but the thing about learning is that there’s a whole lot of failure before finding success.  This is where Chronos is especially useful because death just means rewinding to the start of the room before trying again.  Say you’ve got a section of an area with a door, a roaming muscle-thug, a bottle lying on the floor and a rifle-guy.  You can wait outside the door for Mr Muscles to get too close, kick the door and squish him, then throw the bottle at the rifle guy.  Or you can kick open the door, dodge-roll the muscle goon’s attack, go into slow-mo to slash the rifle bullet back into the enemy’s face, then take out the first goon with a sword strike and save the bottle for the area’s next section.  The enemies aren’t always following the exact same path from one attempt to the next, so there’s also the possibility that guards from another section of the level heard the commotion and are on the way.  Figuring out a good combination of reflexes, memorization and improvisation makes each room a puzzle in arcade action and they’re generally short enough that failure is another chance to get it right rather than a major setback.

Katana Zero still has a couple months to go before release, but the build I got to play felt very complete.  Complete enough that I couldn’t stop playing until I beat the whole thing, in fact, and I’m now feeling the withdrawal symptoms.  The game builds a world where its action makes sense, but never holds back on letting the player leave a huge body count behind while also making every enemy a real threat.  The story is one you’ll need to see completed, filled with memorable characters and plenty of twists and surprises along the way, and it lets you know from the start that the samurai is a classic unreliable narrator so you can never quite trust what you see.  The samurai’s world is spiraling out of control and his therapist is getting grumpier by the day, but the killing is always a challenge to be met with graceful efficiency.  And when that doesn’t work, Chronos guarantees another chance to screw it up in a unique and bloody fashion.