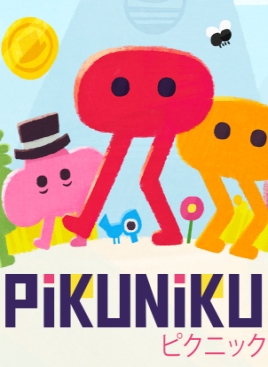 Quirkiness and charm are major selling points in a lot of indie games, and as such, it takes something special to stand out. For developers Sectorhub, though, all they needed was a red oval with some adorable eyes. Well, that and a story involving a possible dystopia. Their puzzle-platformer, Pikuniku, turned some heads when Devolver Digital first unveiled it a while back. It looked and felt unique, upon first impression. But does the final product’s quality match the charm and adorableness of its lead character alone? Well, okay, that’s a tough bar to to clear, but let’s see how close the game comes…

Now, if you’ll recall our initial preview from just over a year ago, the setup for Pikuniku involved a mysterious town under constant surveillance with a mayor trying to force everyone to be happy via a daily festival, who eventually makes you a permanent resident with your own home. It was a highly-intriguing setup that contrasted brilliantly with the colorful, childlike aesthetics. And now…you need to forget about all of that, because it no longer exists. No, really. The entire plot is different now. Instead you’re a mysterious red creature simply known as “The Beast” by nearby villagers. After emerging one day, you find that that a Mr. Sunshine is offering the locals free money for useless junk (like corn and wood). Eventually, you find yourself exploring around the land, hooking up with a resistance, and plotting to uncover Sunshine Inc.’s plan and stop them.

It’s a jarring change, to say the least. I can’t tell if somewhere between then and now, they decided to overhaul the whole plot or if the original premise was just for demo purposes. About the only aspect remaining is the the creepy surveillance cameras that pop up and even they feel completely downplayed. Well, the cameras and the style and character designs remain, obviously. For a change this drastic to occur in a relatively short amount of time just feels odd. 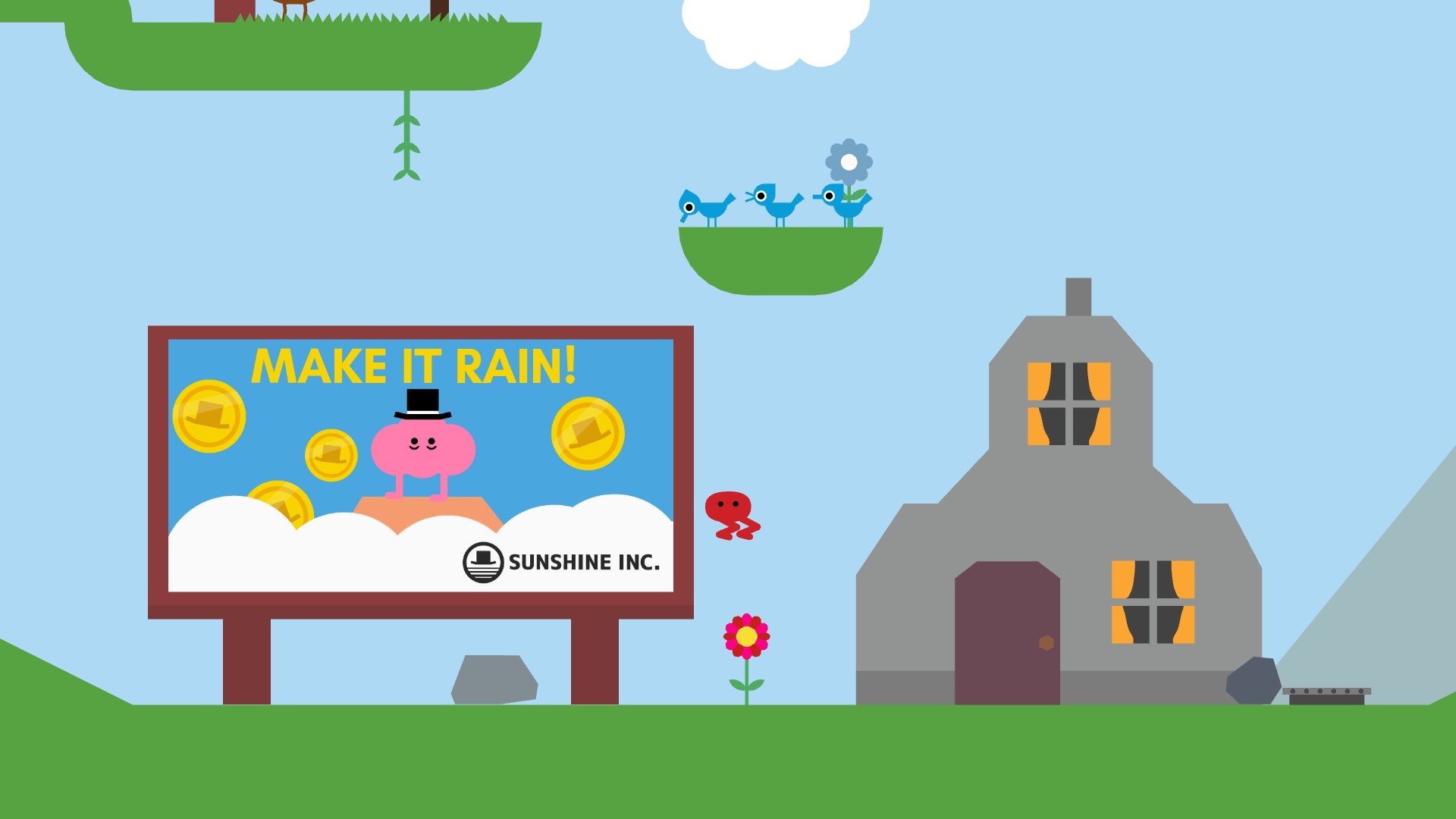 But enough about these changes, let’s get into the actual game that we have now. At its core, Pikuniku is still a simplistic platformer. You can jump, kick, swing from certain hooks, and roll around as a small oval, Morph Ball-style. There are a couple of skills that you gain as progress is made, but that’s about it. And really, not much more is needed. Thanks to a world filled with well-crafted puzzles, platforming action and a good amount of exploration, Pikuniku‘s gameplay is arguably a terrific definition of the “simple yet fun” design philosophy.

Not that you won’t be switching things up now and then. Pikuniku is capable of throwing a few curve balls in the player’s directions. Sometimes it’s just a boss battle or two, but then maybe there’s also a rhythm game, basketball/soccer hybrids and classic arcade homages. It’s a good chunk of variety to keep you on your toes, with each section being easy to get used to. It may never be anything revolutionary, but the game is always ready to deliver something fun at the player. 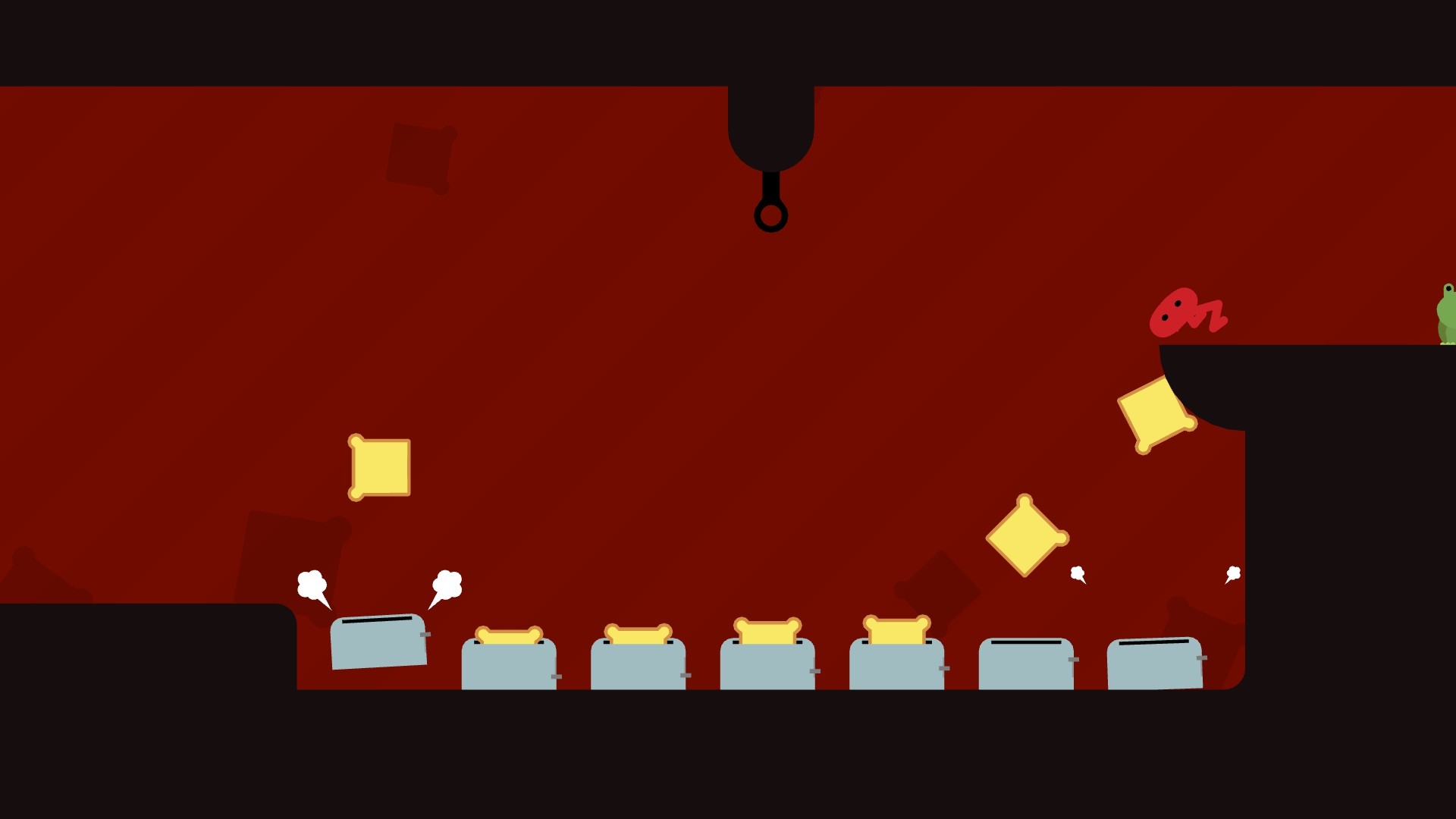 And that’s the key word that defines a lot of what makes Pikuniku enjoyable: fun. Plain and simple. This is embodied in the game’s art style, with everything being lineless, bold and colorful, like it came out of a kid’s storybook. The animation in particular is also nice and fluid, especially on or hero’s limbs as they walk of jump. The screenshots here alone may not do things justice. It may be a minimalist style, but just looks good in motion, as every citizen walks around their town.

Speaking of the citizens, Pikuniku also has a world filled with some rather enjoyable characters as well. Even if the main story can seem a little basic at times, it’s bolstered by the humorous dialogue each cast member aside from our hero gets. It comes across as laid back a lot of the time, but works as another sharp contrast to the standard plot about a resistance, with members describing where they keep their snacks seeming just as important to them as detailing how to take down a giant robot. Everybody gets a chunk of good lines in (including their reactions to “The Beast” and their actions over time) and even the hidden insects that you can uncover have some cute little vignettes.

The previously-mentioned insects also make up part of the hidden secrets in Pikuniku. There are indeed a good amount of hidden areas to explore, ranging from the obvious to those more out of the way. In these lie optional challenges, trophies and coins to collect for the various shops in order to score collectible headgear. A lot of this is related to the side quests, which again, have a nice amount of variety, such as hide and seek competitions, treasure hunting and defeating evil toast demons. A lot of them are enjoyable and add a bit of much-needed replayability. 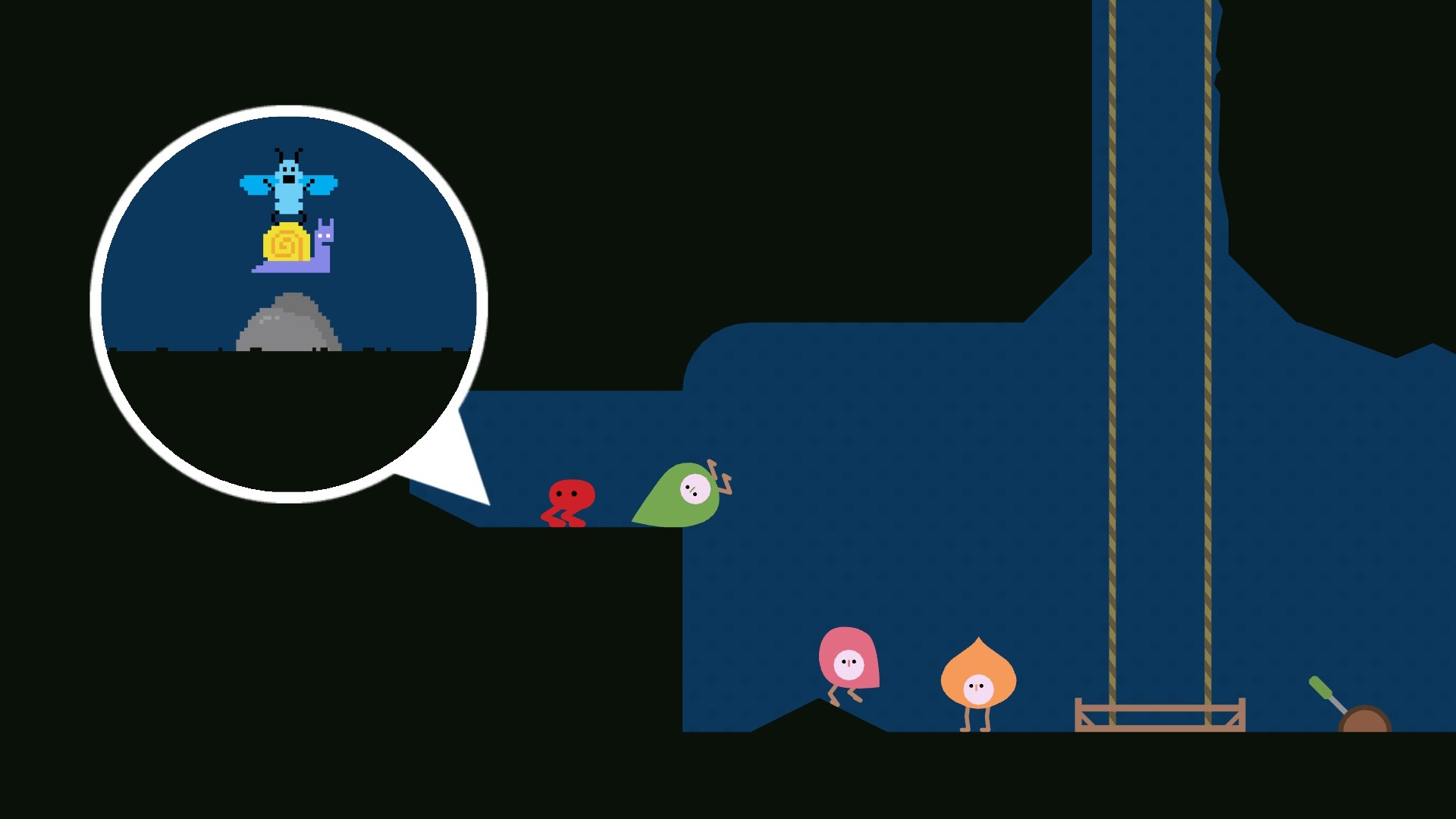 Getting back to gameplay, though, it should be noted that Pikuniku is a puzzle-platformer that utilizes physics, with more than a few obstacles involving having to kick objects around until they reach a certain spot. Kick a ball onto a button, kick acorns into water, kick a rotund guy through a maze, et cetera. A lot of it is enjoyable, but I would be lying if there wasn’t the occasional slight hair-puller when it game to the physics, like having to properly get a ball across a gap using a ramp. It only comes across as minor hindrance a lot of the time, though.

But if Pikuniku does have a major flaw, it’s one that seemingly strikes every puzzle-platformer that comes our way: it’s short. Players should be able to breeze through the campaign in about two hours, and that’s even if one stops for several side quests. Now, as mentioned before in reviews for previous puzzle-platformers, a truly great entry does everything it need to do in those few hours. Yet honestly, I walked away from Pikuniku feeling like that wasn’t the case this time. The game almost follows a metroidvania structure, suggesting areas you come back to with multiple power-ups you unlock. But save for the watering can head that creates platforms out of certain flowers, everything else is basically cosmetic. And while there are a decent chunk of secrets, it’s still a linear world. 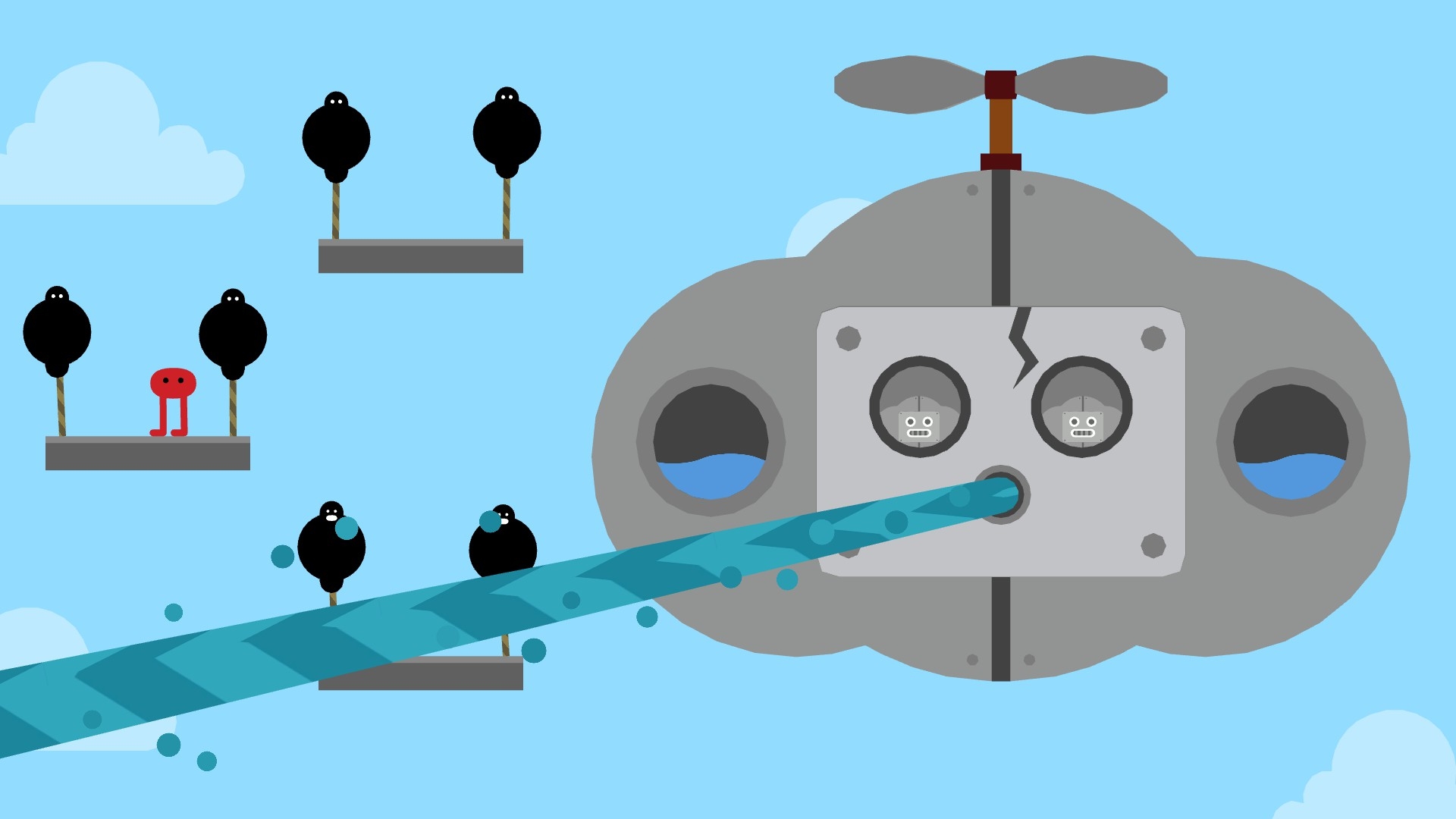 It feels lacking even in terms of narrative. There’s a scene right before the credits suggesting there may be something bigger surrounding our hero’s history, but even after following a few notable secret areas and quests in the post-game, nothing popped up. Mind you, I do still have a few missing trophies and three hidden achievements, so I could be missing something. But if Pikuniku has a bombshell for the story, it’s hidden away hard. It feels like it ends just as some truly interesting stuff should emerge. In fact, combined with the changes in plot earlier, it almost feels like something bigger was cut out, sadly.

Oh, and finally, it should be pointed out that Pikuniku does have a co-op mode. Unfortunately, being local co-op, I wasn’t able to experience it at the moment. It does promise additional challenges and levels designed around co-operation, which is a nice addition. But whether it adds enough to boost up one’s overall opinion of the game, I can’t say. But it doesn’t detract from anything, naturally, and the end result is still a colorful romp that even the whole family may want to check out. 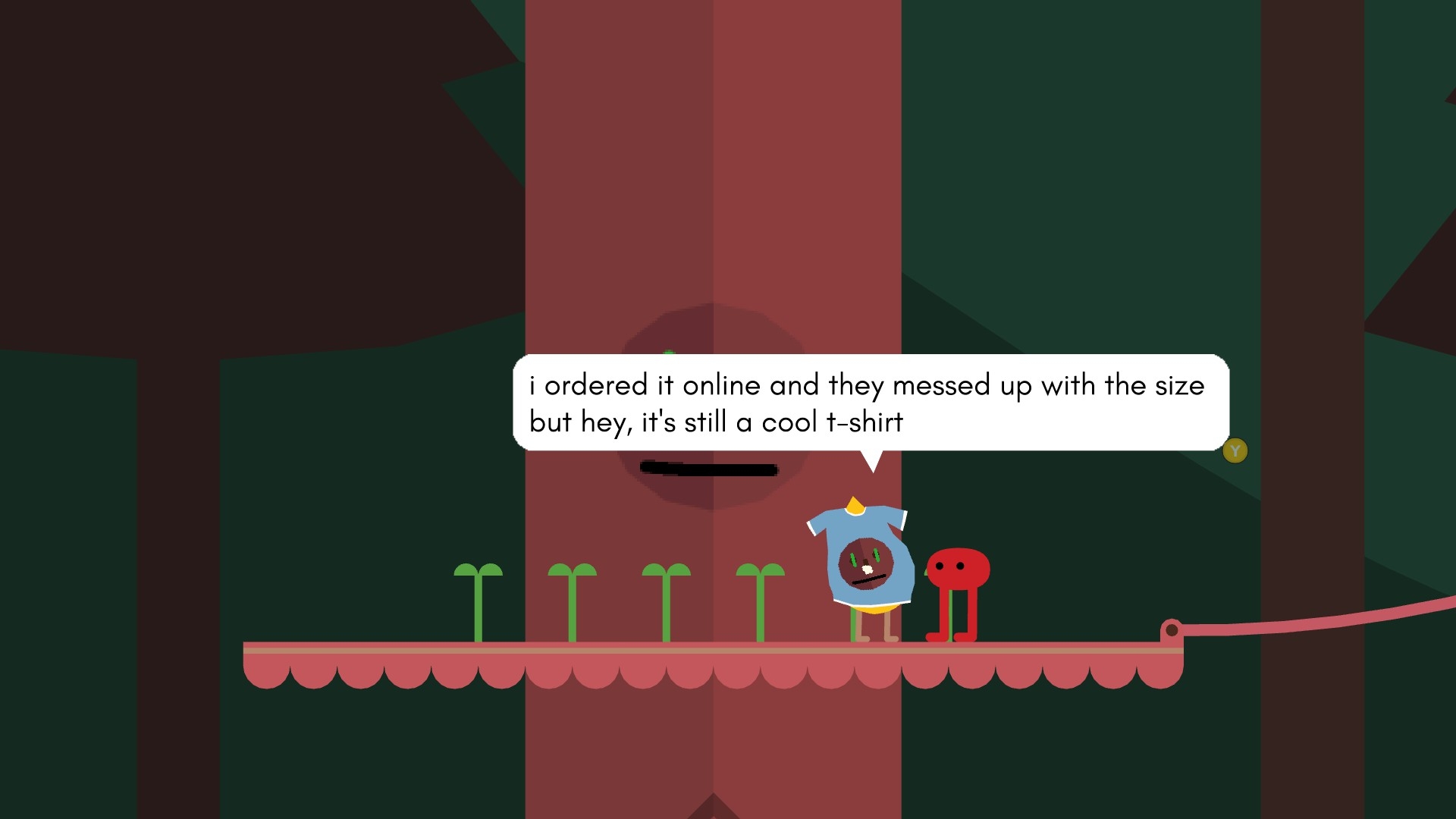 It would have been nice if Pikuniku was longer and had a bit more to its story, if only because it means spending more time with its interesting and charming world. Still, what we have is a fun blend of physics-based gameplay, traditional platforming, exploration, eye-catching art and a fun cast that makes for one cute, highly-enjoyable experience. It’s a quick little romp through a gleefully bizarre world that you won’t regret checking out.