Long ago Wanda accepted the fact that I exist in a perpetual state of suspended adolescence. While other couples discuss grandchildren and retiring on a lake, she can look forward to me playing on the PlayStation 12 and sneaking out of the retirement home to go see a symphonic black metal concert in our golden years. Wanda has picked up on what games I enjoy playing in the rare free time I have to play games that aren’t the adult equivalent of homework assignments. Dragon Quest XI did not seem like a title that fit that mold so it is understandable Wanda is a bit perplexed at how excited I was over a proper Dragon Quest game coming out that wasn’t on a handheld system.

Dragon Quest and I go way back. I have the first four Dragon Warrior games on the NES and paid five bucks for Dragon Warrior IV, which is going for much more than that on eBay. It has been over a decade since we’ve had a real Dragon Quest game on a home console and I was very excited to play it, which I did immediately after it came out, assuming immediately encompasses two months after it’s release date. Wanda was curious why this excited me so and decided to sit down and watch me step into the shows of the luminary. Dragon Quest XI began in a way that isn’t too groundbreaking as far as JRPGs go, with the whole child of prophecy being sent away from home to avoid death as an infant type of thing. This wasn’t an issue, Dragon Quest games have always been rather formulaic and filled with their own tropes. Maybe I am just a hardcore Dragon Quest fan boy, but Dragon Quest XI was one of my favorite titles from 2018. 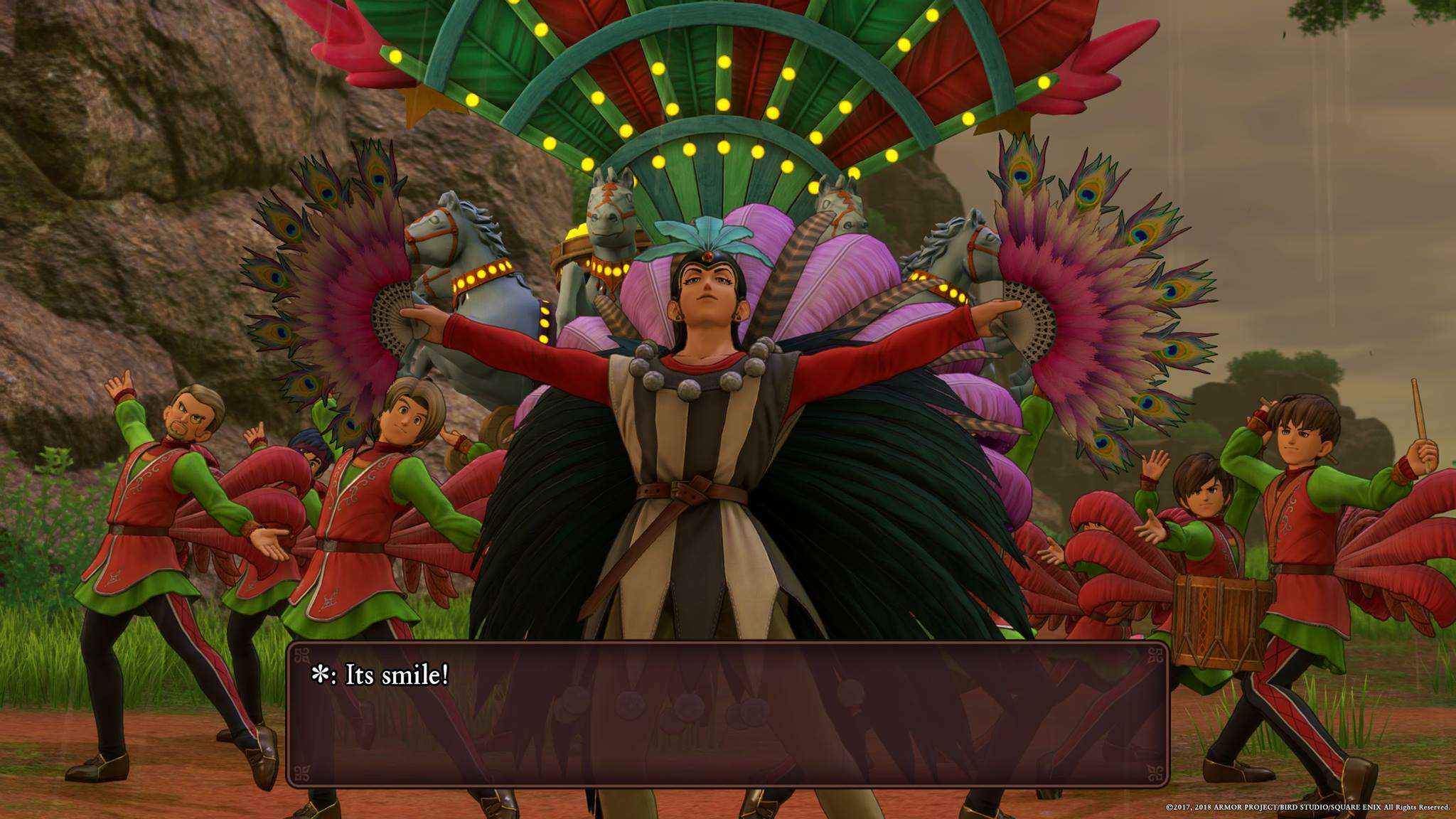 Wanda continued to play on her phone as I was enthralled with this game. Wanda would look up occasionally if I pointed out a cool monster or something humorous happened. She didn’t seem to dislike the game, it just didn’t catch her interest as I sank every waking hour into Dragon Quest XI. She probably wondered why I was so into the game. I found this whole split between our interest was mildly depressing. This is one of my favorite video game series and I wanted her to share my joy in experiencing this new title. This didn’t seem like it was going to happen. And then a miracle happened. And that miracle was named Sylvando.

Sylvando is so amazing he is possibly the greatest video game character since Battleborn’s Montana, but it’s difficult to get into his greatness without getting into some spoiler territory, so consider this your warning. We first meet Sylvando at Gallopolis while the hero is trying to enable the prince’s royal incompetence. Sylvando’s grand entrance is that of a showman who will go to any length to entertain the audience. His motives are unclear from the beginning, but soon it becomes apparent that he is one of the nicest characters that will be encountered in Dragon Quest XI, as one of the first things he does after joining the party is work to secure his ship for the party to use. 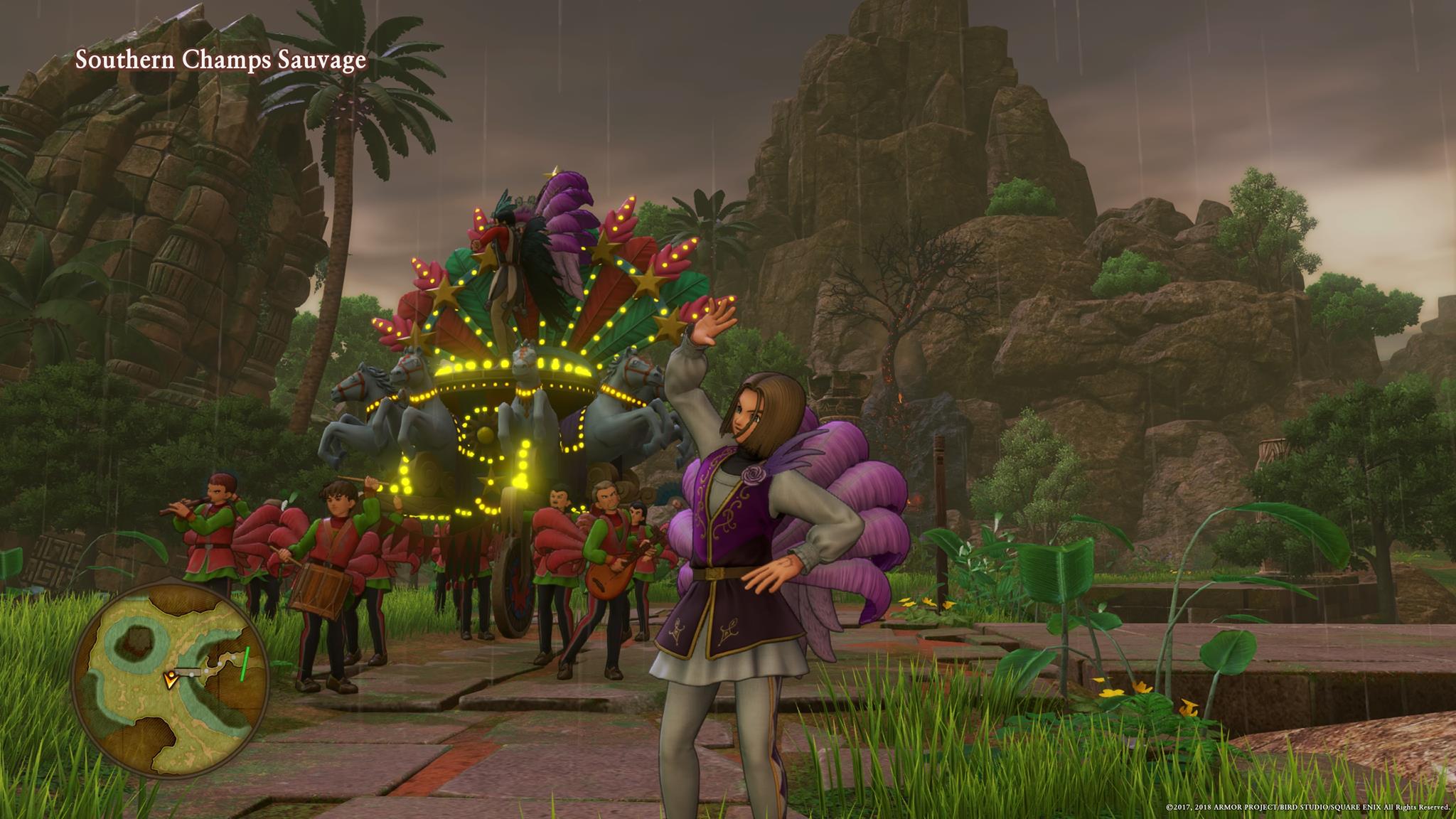 Much of Sylvando’s personality entertained us through the rest of the game. His charismatic flamboyancy is nearly impossible not to smile around, whether he is helping NPC children in villages as Detective Sylv or playing music in battle, though it’s hard to top his proclamations of the great Sylvando growing even greater. Sylvando’s appearances always put him at the center of attention, but one of the greatest ones happens in the second act of the game when things have gone horribly wrong. The luminary and his companion stumble across a man who has ran into some problems, but before he can intervene, his thunder is stolen by the knight in smiling armor. Sylvando makes an appearance leading a grand parade and ends up saving the day, but not without making a huge spectacle of himself while blasting some amazing music. Around this time last year Wanda would get tormented with me randomly playing Emil’s shop theme from NieR Automata. This is the new random song of annoyance at our house. This scene ends with Sylvando giving a luminary a wardrobe makeover in the form of the Mardi Garb, one of my puns Dragon Quest XI has scattered throughout.

Sylvando, not surprisingly, is actually an alias. Sylvando is really Norberto, son of the legendary knight Don Rodrigo. Sylvando was raised to follow in his papi’s footsteps and become a knight but Sylvando had a different path in mind. He wanted to travel the world and put a smile on everyone’s face. Sylvando was naturally fearful at the prospect of facing his father, as he had feared that he disappointed his father by not being who his father wanted him to be. Don Rodrigo was displeased that Sylvando had returned, but not for the reason he had feared. Don Rodrigo accepted that Sylvando had chosen a different path than he had in mind and was disappointed that Sylvando had not yet completed his quest to bring smiles to everyone, stating he was raised to set a goal and achieve it. It seems like a small thing, maybe even a bit sappy, but both myself and Wanda know several people who’s deviation from their family’s expectation for them did not have the happy resolution this scene did. Even though this is a complete work of fiction, it was heartwarming to see that after how ever many years and whatever the details were that led to the present moment, Sylvando and his father finally had their moment of reconciliation. 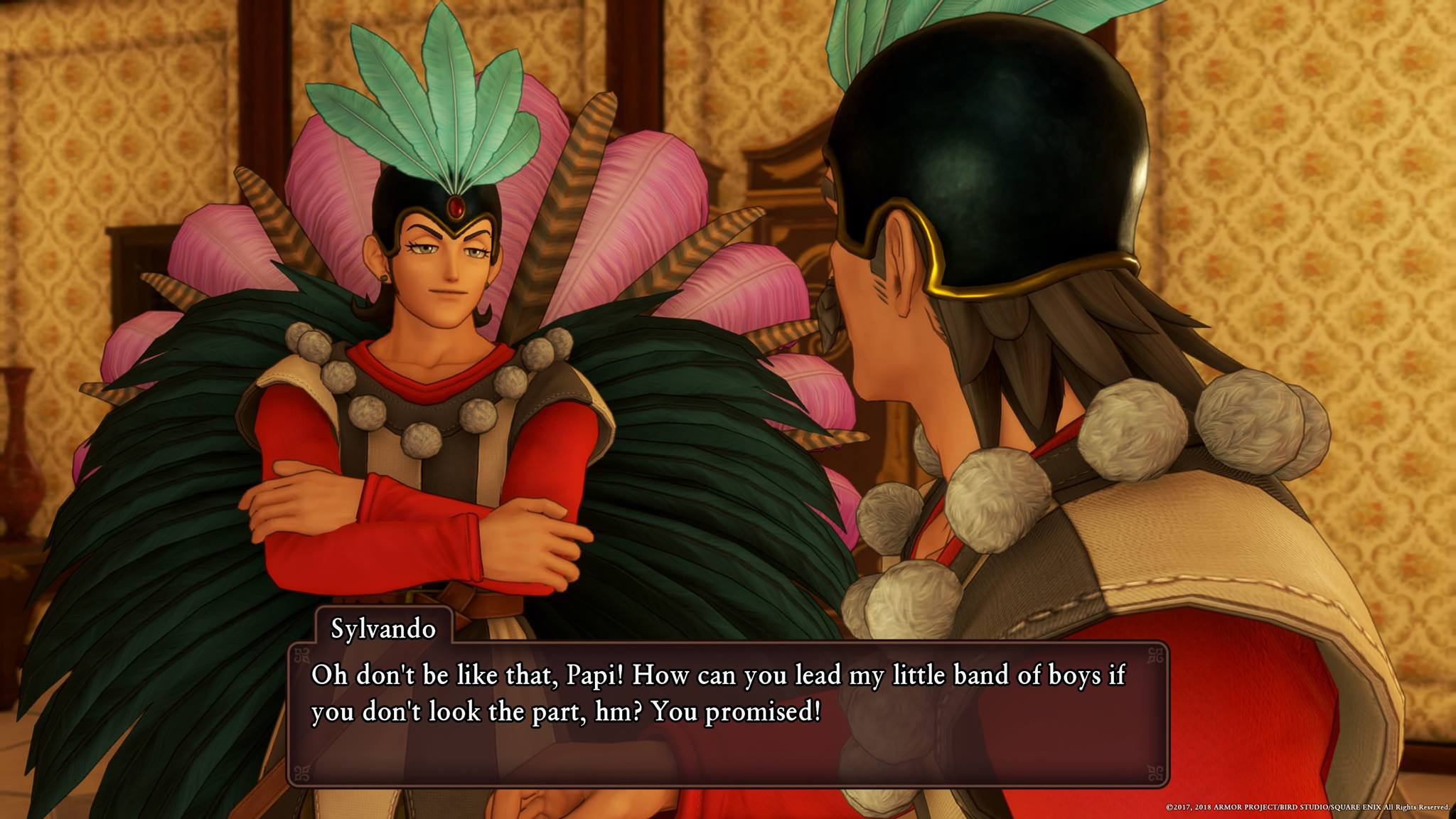 Dragon Quest XI was among my top five games of 2018 and Sylvando is one of the best features in the game. While he is often a caricature of stereotypes and used for comic relief, his mission in life is to put a smile on your face which he often succeeds, and his more serious moments do add some depth to him, showing that in some ways he is the clown hiding his tears behind a smile. While not really discussed in the game, watching the scene with his father gives me the idea prior to us meeting him he wasn’t all showmanship and smiles, it’s a role he adopted for survival and to make others not feel like he did. My interpretation of this character may not be the intended one from his creator, but it’s one that makes me like Sylvando more. And having someone like Wanda to share a Dragon Quest game with makes the character that much more meaningful.