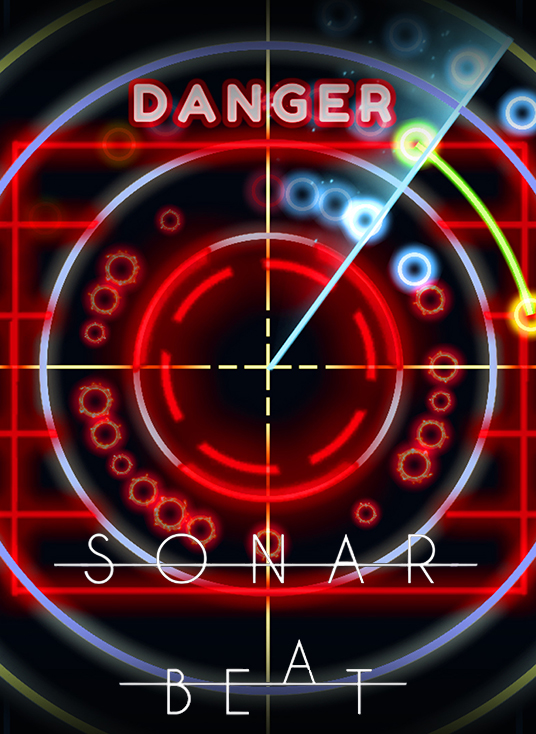 All music games come down to figuring out a good way to arrange notes and time. Whether that’s Ouendan‘s touch-screen tapping, Rock Band‘s scrolling bars, Airtone‘s swishy lines or Beat Saber‘s slicing action, the trick to a good music game is to come up with an interesting mechanic for note progression. Once that’s in place the soundtrack takes care of the rest, because it doesn’t take a lot to make playing with music fun.

Sonar Beat is a pure music-rhythm game with a nautical theme and an upbeat but still nicely chill electronica soundtrack. A line sweeps around a sonar readout as notes pop in just ahead of it and you need to tap in time to the beat to prevent them from advancing to the heart of the display. The readout is divided into three rings and standard notes can appear on the outer two. Miss a note and it moves to the inner ring and if you miss again it counts as a hit against you. Do that too often and the track ends and by the time you get to the fourth or fifth songs (of twelve total) it gets easy to blow it before a little practice opens up the next song.

The controls are divided up between two buttons, one for the primary hit and the other being secondary. In the beginning notes pop up one at a time, politely lined up for single-button rhythm tapping, but soon enough the second button comes into play. Two notes on two rings at once is the most common setup, but a long note requiring a hold might have other individual notes on the middle ring, and the dual-ringed pink notes require hitting both buttons together to clear the single hit. It took me a while to come up with a control scheme that worked for this and eventually I gave up on using a controller at all to switch to the precision of the keyboard, one hand per button. I’ll also admit that part of me is still wondering about a Gamecube USB adaptor to see if I can get Sonar Beat to work with the Donkey Konga bongos. 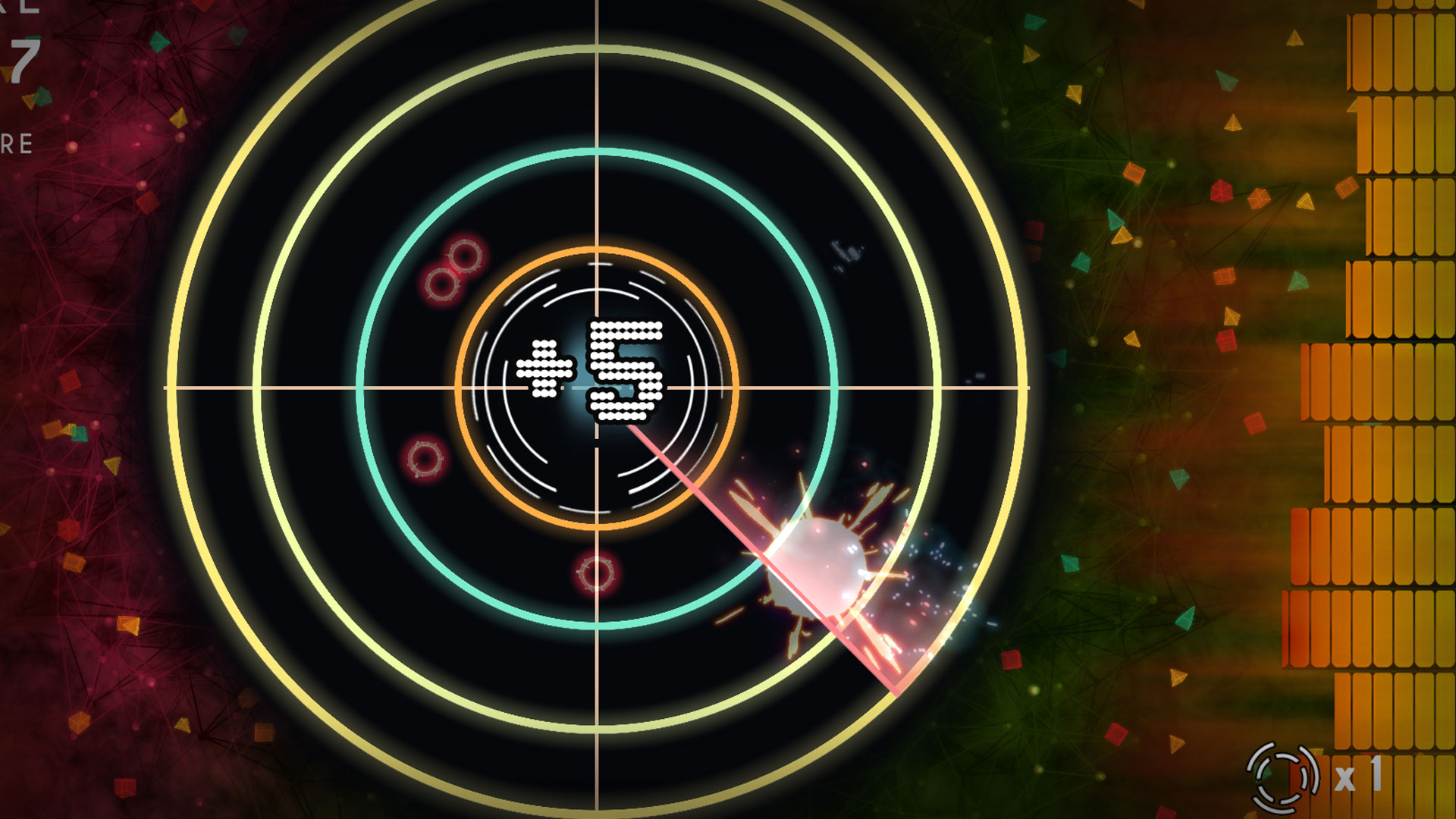 While the basic presentation of the game is simple, it gets nicely complicated as the song goes on and you build the combo. The sonar remains clear of any interference but you get a good number of effects outside the circle, especially as you chain notes together and go from the standard background to one dancing to the music. Each song has its own style and effects, although when the notes start flying it’s hard to pay attention.  The important visual parts happen inside the circle of the sonar readout and the game is smart enough to not have the effects intrude.  There’s already enough going on inside the readout that there doesn’t need to be any extra distractions.

The early songs are fun to learn, with note tracks that do a good job of getting you up to speed on the mechanics, but the nature of the display means some of the tricks it throws at you when the notes get denser are hard to read.  Two notes on different rows is easy enough to see, but when they fade into existence a second before the sweeping arm of the sonar gets to them it can be hard to read correctly.  Three notes set up with two on the outermost ring and one on the center one can be either primary and secondary hit together and then primary again for the third, or three rapid taps of the primary button, depending on whether the middle-ring note is directly underneath the the first one or not.  If it was a straight Rock Band-style scroll it would be fairly easy to tell, but the nature of the circle is that distance shrinks the closer to the center you get and determining note order can take a bit more time than the game gives, especially when in the midst of a dense cascade.  The beat can help determine how the notes should go, but because there’s an element of randomization, you can’t completely memorize a difficult section.

The other issue that slowed me down was the primary and secondary hit buttons, and the amount of work it gives to one finger/hand depending on your setup.  You can’t treat the buttons like a pair of drumsticks, in that it doesn’t matter which you use, but instead the secondary hit only comes into play when the primary is busy.  While I eventually settled on a one-hand-per-note setup on my keyboard playing never felt particularly comfortable, especially on the songs starting in the middle of the game when the note density goes up.  While Sonar Beat is relatively forgiving and doesn’t have the same focus on perfection of a standard rhythm game, it’s still never quite felt right. 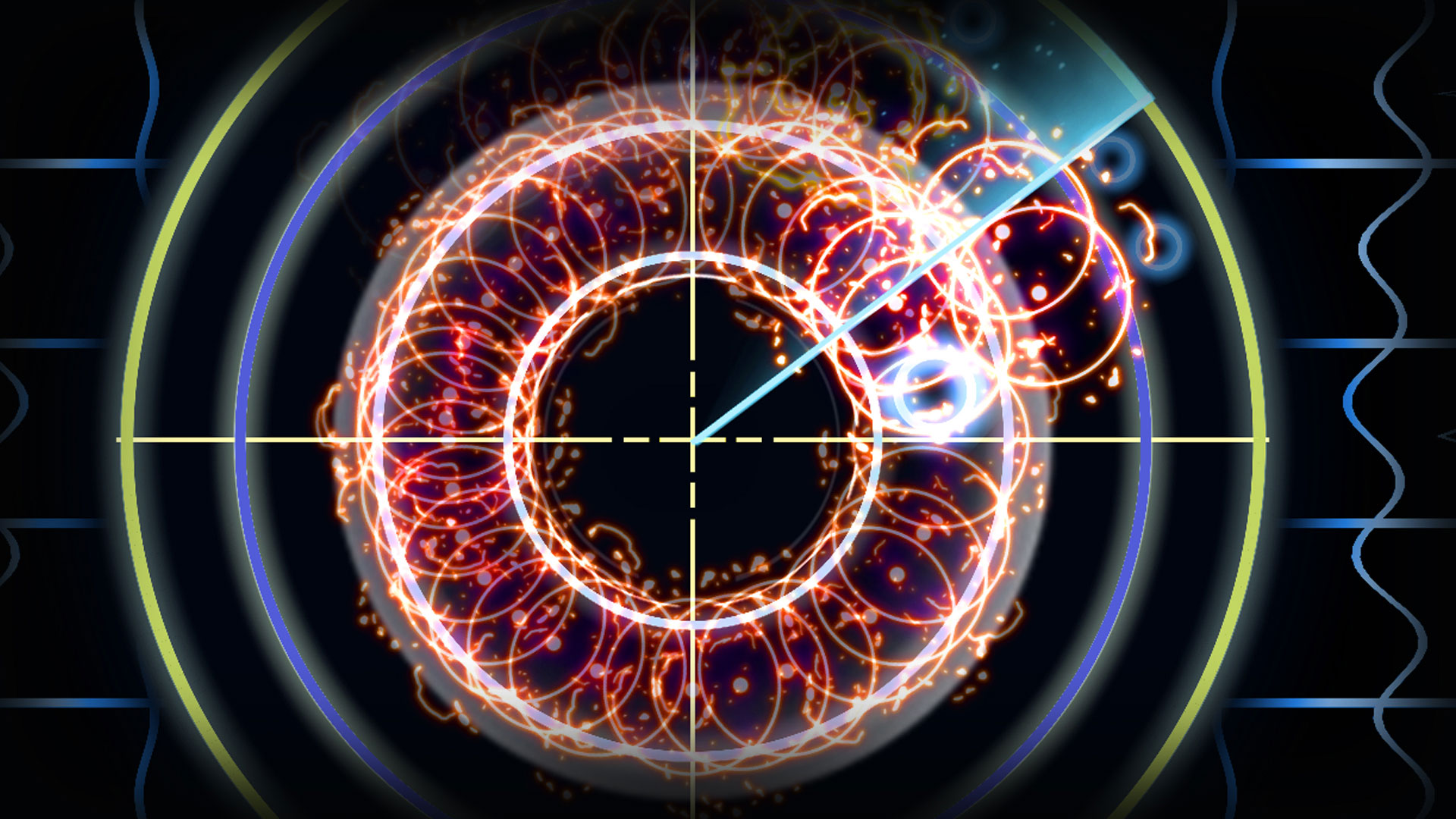 Sonar Beat is a clever rhythm game with a pleasant soundtrack and a good visual style.  It also gets very hard very fast, with the early songs showing accessible note tracks before things get out of hand around level six.  As the sonar arm speeds up on the more difficult songs it makes for less and less time to read the notes before it’s time to tap them away, so even if you’ve got a good head for the rhythm it’s hard to know what the song is going to ask of you.  When the later songs got too brutal, though, I’d go back and play one of the earlier ones to get a sense of what Sonar Beat could be.  There’s a good design in here but to make it work the note tracks needed to work with sonar’s layout and be a little more in tune with human-standard reactions.  The first several songs are good fun to play but then the difficulty wall chunks itself into place and instead of playing the music you end up flailing away, hoping to clear away as many outer notes as possible while guarding the center ring against the advancing missed ones.  You can survive that way, but it’s not particularly musical, and that’s a problem for a music-rhythm game.