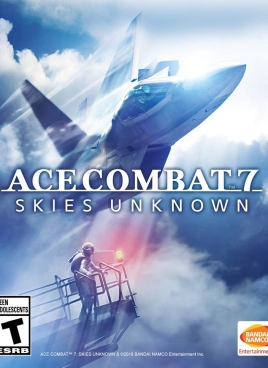 Since 1995, the Ace Combat series has grown from being a highly-regarded arcade and console flight-action game to being one of the biggest sellers in Bandai Namco’s entire catalog. The franchise has been dormant for far too long, but returns with a vengeance in its most action-packed and user-friendly entry to date. With that said, the seventh mainline entry showcases not only just how far the series has grown from its humble beginnings — but also how much room it can still grow by further modernizing its core game mechanics. The dogfighting action has evolved quite a bit, but the mission structure is in need of improvement. With the last numbered game being released in 2007, one would expect Ace Combat 7: Skies Unknown to be the best-playing entry to date — and for the most part, it is.

The intricate flying controls from past games are here, and do rely on intense coordination for proper turning and movement. The classic mode has a steeper learning curve and requires you to move not only the left stick in the direction you want but also adjust your pitch at the same time. This gives you far more control over your aircraft, while the simple handling is better if you’re more used to things like After Burner where the left stick would just control your movement by sending you in the direction you want. By default, you will also have up sending you down and vice versa, but all of the stick controls are fully configurable too — although for a flight game, it’s easier to keep at least your vertical movement mapped to the default since that’s how you would move a flight stick as well. 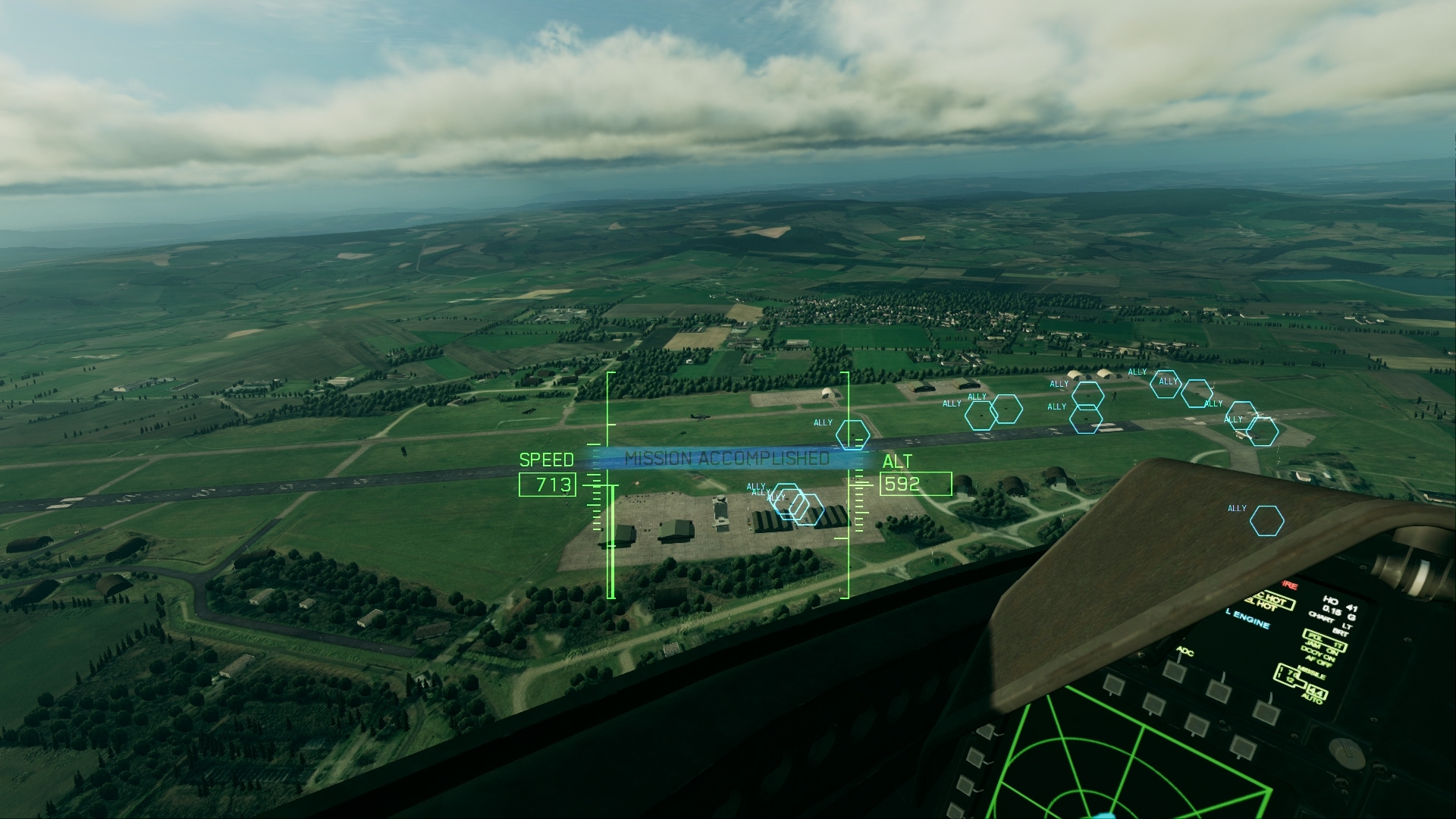 Ace Combat 7 gives players a healthy amount of aircraft types and more weapons to choose from too, meaning that there will be a bit of trial and error as you try and find what suits you best. Ace Combat 7 gives you fighter, attack and multirole crafts to use to cater to players. Fighters are speedy and agile, so they’re great for when you’re outnumbered since you can pick off rivals one by one. With a fighter, you want to use as much defense as you can, and beyond evading blasts, you can also use things like the clouds as cover. Cloud cover is risky because while it obscures the view of enemies, you also can’t see through it and your screen winds up obscured with not only a cloud, but also leads to some waterfall on your windshield — so you have to use it carefully. Relying on it also means that you can’t rattle off any damage since your own attacks can only land if you have them perfectly lined up — and even homing missiles require you to be somewhat near rivals.

Attack crafts are akin to a large brute that has a bit of speed, but chooses to dominate with force. They don’t move and swiftly and aren’t as good at evasion — but can take some hits and keep on ticking. They’re tough and durable and excel at ground-based combat. The multirole class is a solid combination of both, but each mission usually requires something that excels at one or the other. If you’re going to be in the air a lot for a mission, then a multirole or fighter are best. If the mission involves a lot of ground combat, then the attacker is best. If you’re unsure what you’re heading into, then a multirole will get through things, if not perfectly and if you find that it’s a poor choice for the mission, you can just restart and try again with a new craft. 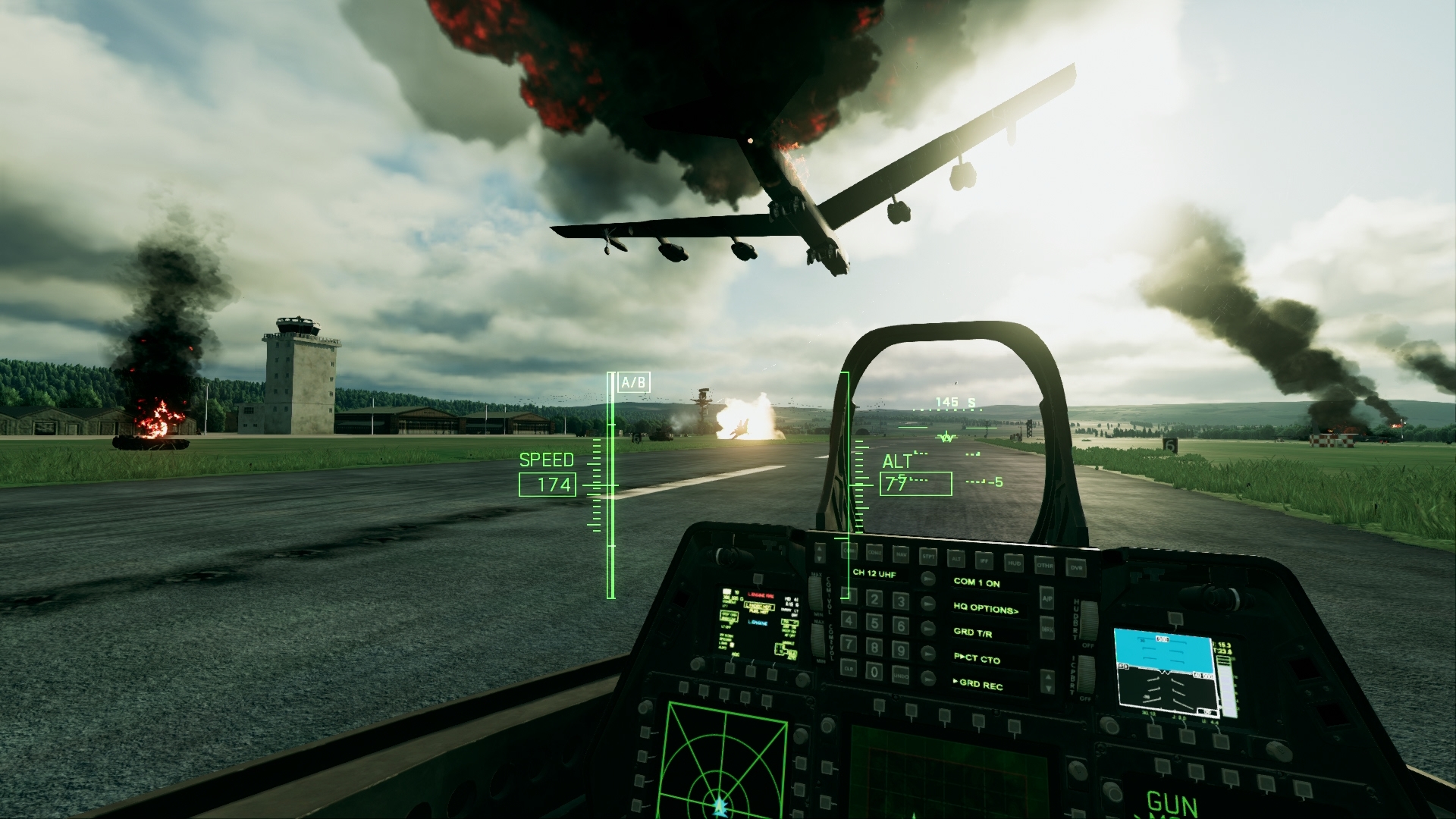 Beyond having access to a greater amount of aircrafts thanks to in-game currency — which thankfully avoids any kind of microtransactions, you also have a robust skill tree. These allow you to enhance various parts of the craft and change how a craft plays. If you have a larger plane that you love, but wish it was a bit faster, then giving it a light body kit will allow you to boost its speed and make it lighter in the process. You can also change out your rudders to make them more maneuverable if you so desire. There’s a lot of flexibility to how players tackle the game’s challenges, and while this is a tougher game compared to something that is purely arcade-centric like an After Burner game, it’s forgiving in how it allows you to tackle its challenges.

Ace Combat 7 offers its greatest challenges to newcomers who haven’t yet experienced the franchise’s mix of strategy and fast action. While playing a classic dogfighting game will help you — especially with the simple controls that replicate how those kinds of games control, the slower pace and increased emphasis on strategy take time to get used to. Navigating with not only what you see in front of your craft, but also using your various radar systems to find out where enemies are and what direction they’re facing in relation to use gives this game a surprising amount of mid-air depth. 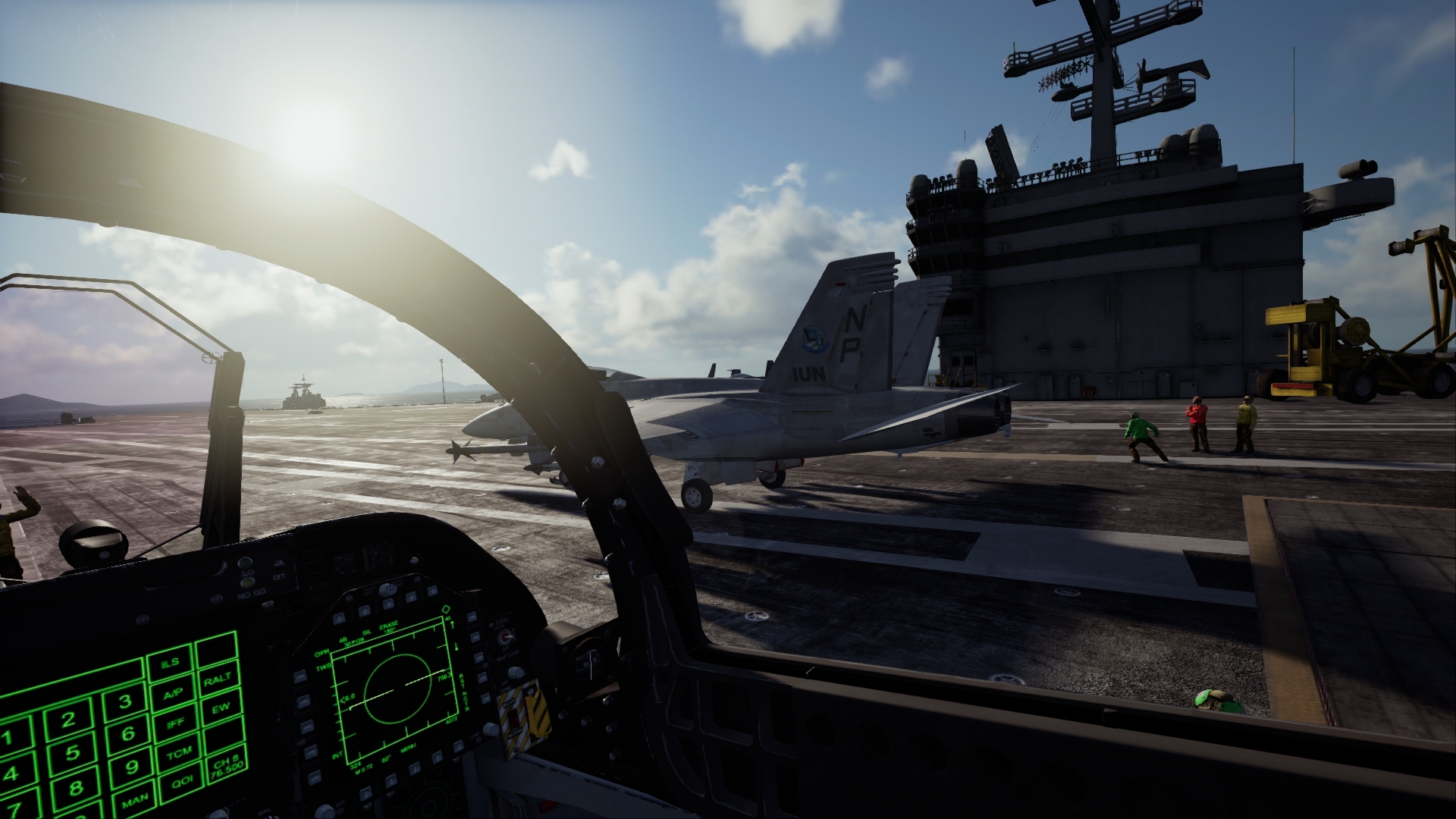 Ace Combat 7 excels at offering up a lot of variety in how the game plays, but suffers a bit with an archaic mission structure. For the past decade in most kinds of games, especially those with larger missions broken up into parts, checkpoints have become the norm. Ace Combat 7 doesn’t give you much leeway when it comes to dying in a mission. You can complete several objectives only to find that upon death, you have to restart from the beginning. It’s frustrating, but does make it even more important to avoid damage and think before you act. This is especially true in later missions where you have things like score attacks to complete alongside traditional missions.

Visually, Ace Combat 7 provides a stunning experience at all times. Beyond the flourishes like clouds providing in-depth cover, you have explosions filling the screen when you’re near and filling the speakers with sound all around you. Playing with a good home theater system or solid headphones allows you to hear not only commands from allies, but also hear where enemies are coming from. If you wind up in a cloud and can’t see an enemy, then being able to hear where they’re at, it still gives you a bit of extra time to get things together and attack. Ace Combat 7’s blend of classical music with a bit of a rock works nicely and gets your blood pumping while still making the events of the story seem epic. 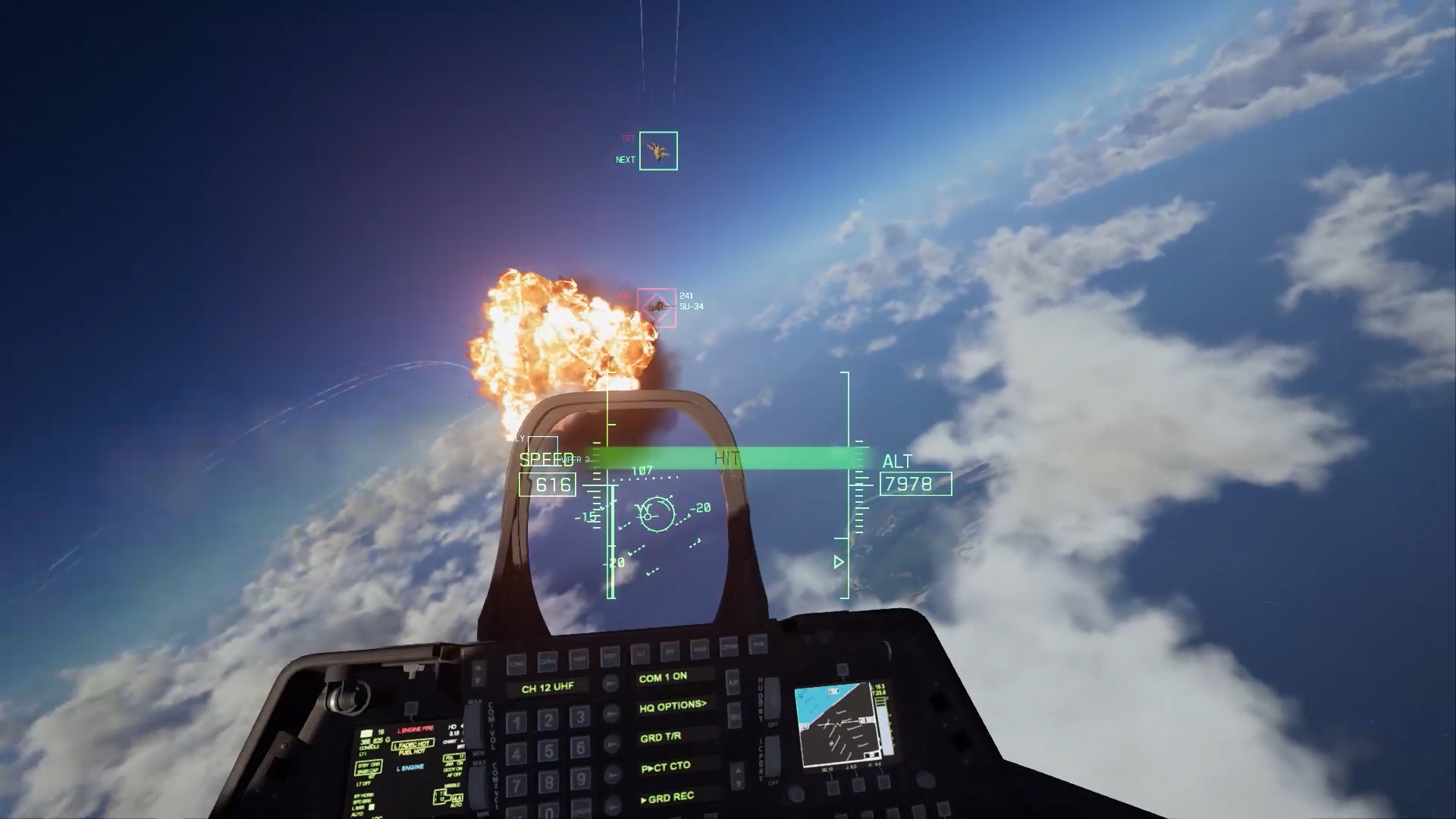 Ace Combat 7: Skies Unknown is the best entry in the series yet and provides a near-perfect blend of action and strategy. Those looking for something to fill the void of the long-gone After Burner series will like the quicker pace offered here. Longtime AC vets will love the quicker pace and increase on craft customization. Dogfights are a rewarding challenge and every part of the presentation is impressive. Its graphics are the best ever seen for a flight-based game and the soundtrack is outstanding too.