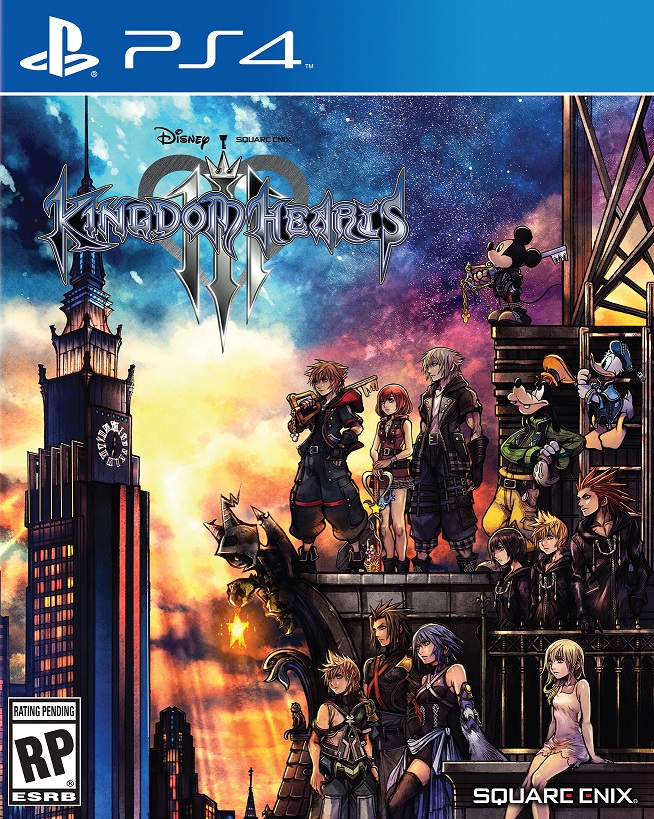 Players began their journey with Sora 17 years ago on the PlayStation 2. Since then, fans have experienced waves of emotions as director Tetsuya Nomura weaved together his magnum opus. We’ve faced off against Organization XIII, witnessed the tragic backstory of Terra, Aqua, and Ventus, and hit an all-time low as Sora nearly fell to darkness. Now, the finale is at hand. Kingdom Hearts III is finally here, culminating the long-running Dark Seeker saga. With numerous gameplay improvements, a new engine and a suite of new worlds to explore, does Kingdom Hearts III offer the satisfying ending players have long hoped for or should it have stayed in the dark?

Kingdom Hearts III picks up right after the end of Dream Drop Distance and 0.2: Birth by Sleep – A Fragmentary Passage. Master Xehanort is making his final preparations for the Keyblade War by gathering his thirteen darknesses. Sora, following his near fall to darkness, must regain his lost power as he works to gather seven warriors of light to clash with Xehanort’s darknesses. His journey takes him across new worlds as he strengthens his heart, saves lost souls and prepares for the final battle.

Kingdom Hearts III represents the emotional culmination of nearly two decades of story. While the writing is spotty in places, the game continuously hits the mark with its story beats. Though some of those beats are predictable, they none the less manage to resonate. Seeing Master Xehanort’s plan play out, reconnecting with old characters and seeing how it all ties together is rather powerful, even though fans have had numerous years to figure out how the story will end. The game still manages to surprise in unexpected ways and a handful of threads are left open for future titles, but overall, Nomura does a spectacular job tying up the saga. 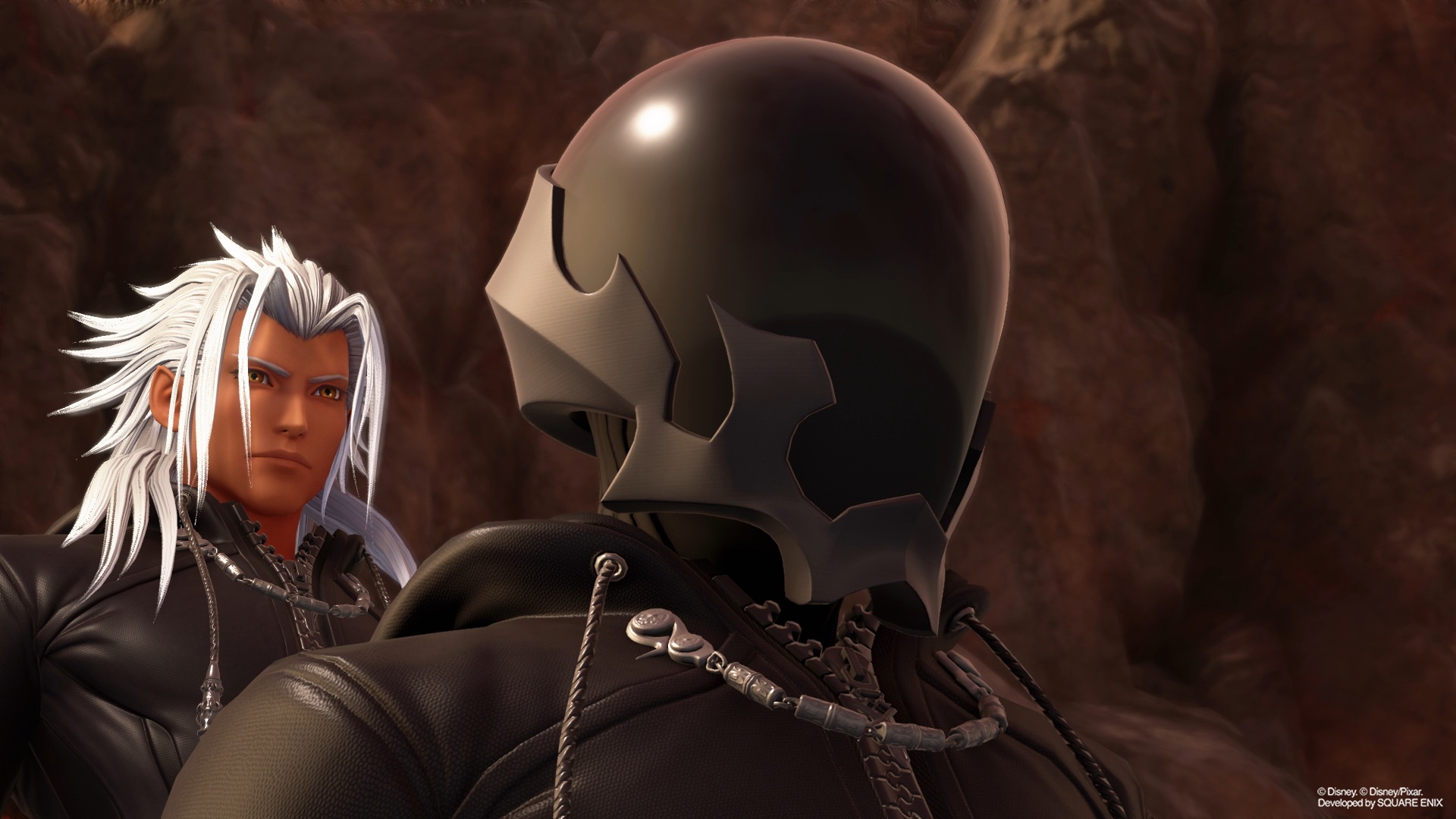 Strong performances from the main cast anchor the emotional weight of the story. Haley Joel Osment, David Gallagher and Willa Holland, in particular, deliver heart-wrenching performances as Sora, Riku and Aqua. Meanwhile, Richard Epcar and Paul St. Peter give menacing performances as Ansem, Seeker of Darkness and Xemnas, respectively. The only sour note is Master Xehanort, who is no longer voiced by Leonard Nimoy following the actor’s passing in 2015. Master Xehanort’s new actor doesn’t possess the notable growl of Nimoy and feels off each time he speaks.

As good and satisfying as the story is, Kingdom Hearts III does suffer from pacing. Many of the story beats are delivered at the beginning of the story and the end with just a few spread out between each of the Disney worlds. The story is still a blast to get through, but it would have been nice to see it better spread out across the journey.

The game also doesn’t make it easy for players to jump in. Kingdom Hearts’ long-running plot has always required players to pay attention, but Kingdom Hearts III is cruel to new players. Despite having recap videos in the main menu, they don’t do enough to prepare new players for this game. If you skipped Birth By Sleep or Dream Drop Distance thinking they were side games, you’re likely to have no clue what is going on. Kingdom Hearts III’s story is spectacular and satisfying, but you need prior knowledge to enjoy it fully. 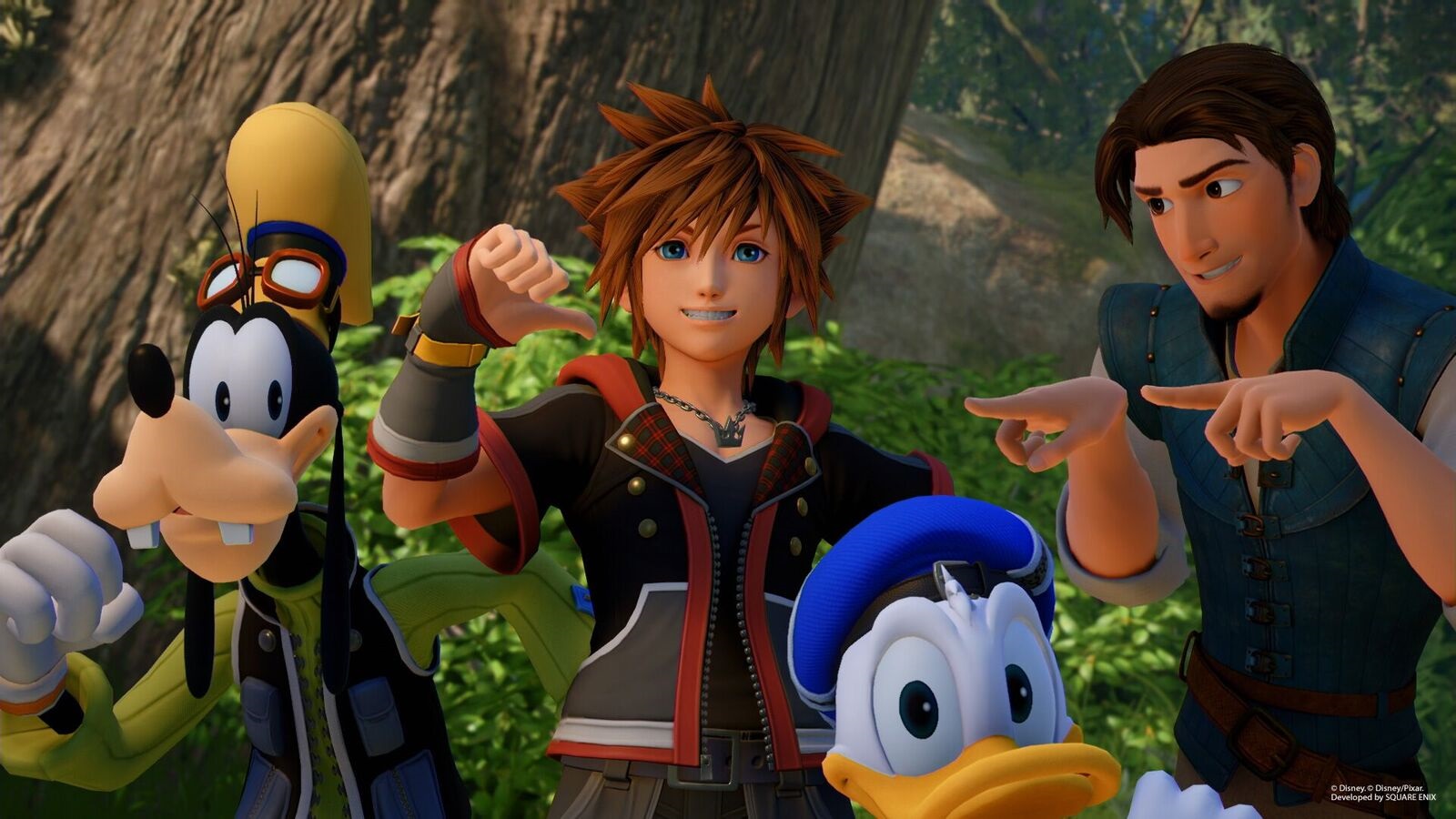 As with all previous Kingdom Hearts titles, Kingdom Hearts III takes players on a journey through various Disney worlds. Unlike the previous entries, the selection this time around focuses heavily on the newer, 3D-animated films, including Tangled and Frozen, as well as Pixar films. The only traditional 2D-animated based worlds are Olympus (Hercules) and 100 Acre Wood (Winnie the Pooh). Mileage will vary depending on how well you like each film, but overall the selection provides plenty of visual and gameplay variety.

Each of the worlds has been painstakingly crafted to feel as authentic to the source material as possible. Worlds like the Kingdom of Corona and Arendelle beautifully replicate Disney’s 3D style to the point where the visuals look nearly on par with their film counterparts. Meanwhile, a live-action world like The Caribbean uses a more photo-realistic technique to bring the likes of Jack Sparrow to life. It’s an impressive batch of worlds visually, though they aren’t all equally fun to play.

Worlds are far more open and more extensive than in any previous game, but they never feel overwhelming. The game makes it clear where to go but leaves the environments open enough to encourage exploration. While each is impressive to look at, engagement with each world wildly varies. The Kingdom of Corona stands as the best designed with visually-stimulating environments and a solid recreation of the film’s story. Meanwhile, The Caribbean introduces ship battles, which are simplistic yet enjoyable, and Toy Box allows players to jump into a giant mech suit. On the other hand, you have worlds like Arendelle, which forces players to climb a mountain three times, or San Fransokyo, which feels too empty to be a sprawling city. 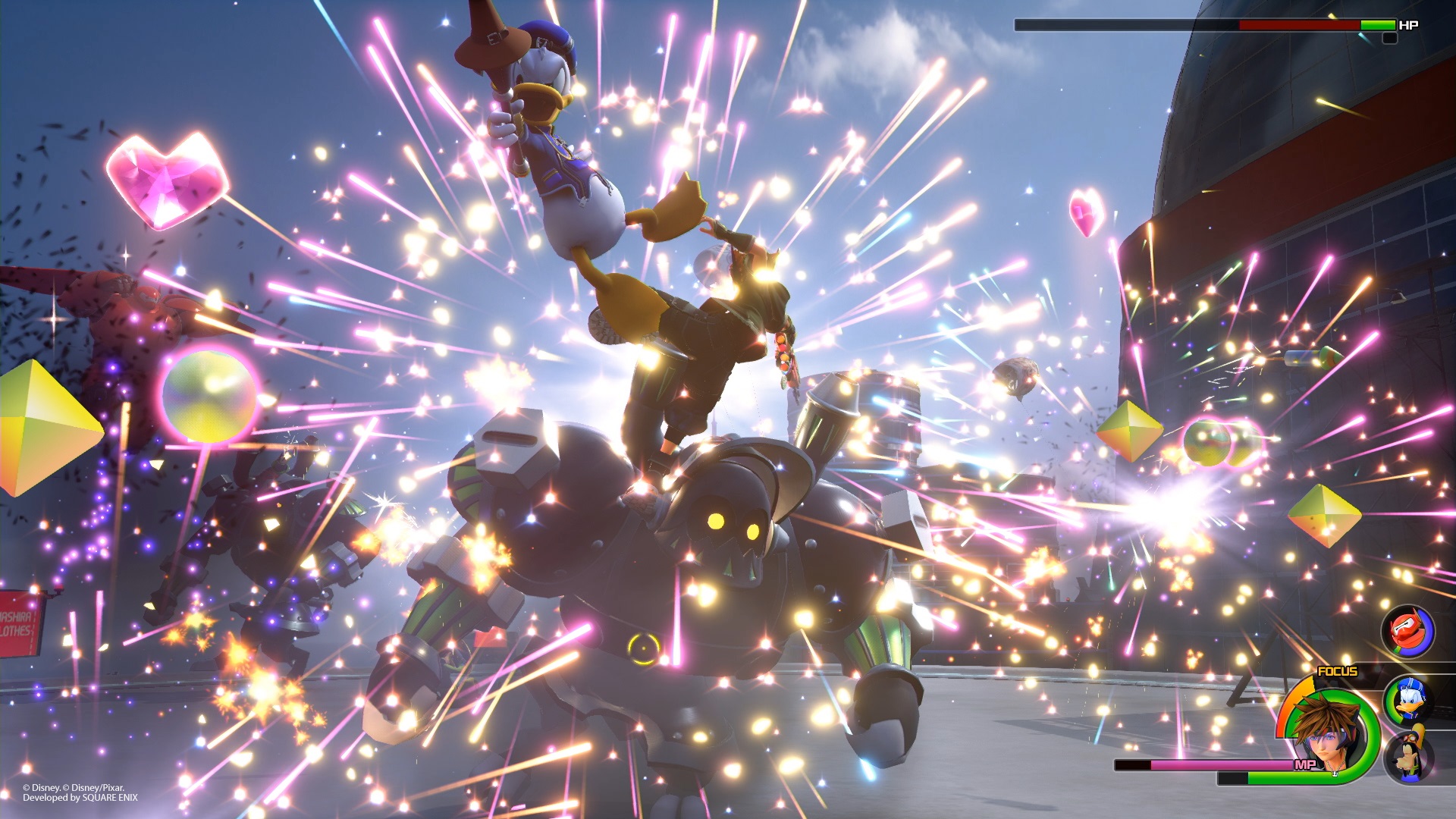 It also doesn’t help that the stories within each of the worlds aren’t particularly compelling. It’s a problem earlier games have struggled with and time hasn’t made Square Enix any better at recreating or telling original stories in Disney’s universe. There are also mundane mini-games within each world that range from OK (dancing in Corona) to dull (finding crabs in The Caribbean) to just awful (putting Olaf together in Arendelle). Still, there’s a decent amount of content to explore after the credits roll, including treasure chests to find and Lucky Emblems to snap.

What Kingdom Hearts III absolutely nails is the gameplay, which is the perfect marriage of the best elements from II, Birth By Sleep, and Dream Drop Distance. The classic style from II returns, but Sora is far more mobile than before. Able to easily launch enemies into the air, Sora performs flashy combos that are further augmented with new abilities.

New to the series are Keyblade Formchanges, an evolution of Birth By Sleep’s Command Styles. By continuously landing attacks or spells, Sora builds up a meter. Once entirely filled, players can activate a Formchange, which yields different effects depending on what Keyblade Sora currently wields. For example, the Frozen Keyblade turns into a set of gauntlets and can be further evolved into a pair of skating blades. They’re fun and flashy, though can be ignored if you’d rather stick with your regular Keyblade. Each Keyblade also has a unique Shotlock, which are powerful moves that home in on targeted enemies. Players can also summon a handful of Disney attractions with Attraction Flow. These amusement park rides deal significant damage and are useful for clearing large waves of enemies. 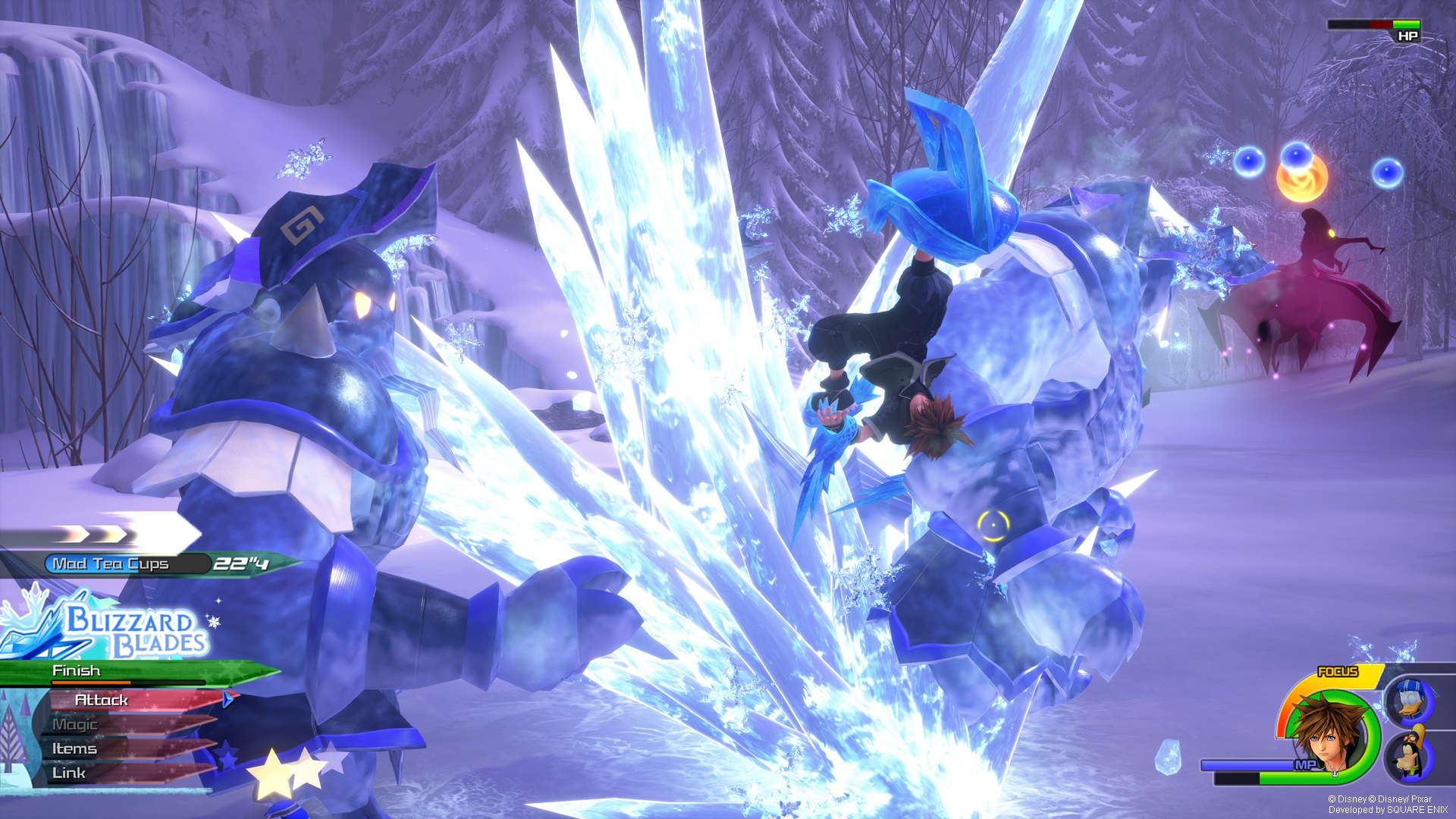 Sora’s mobility has always been a big part of the franchise and Kingdom Hearts III allows him to flex his muscles. Flowmotion from Dream Drop Distance returns, though not as overpowered this time, allowing Sora to interact with the environment in cool ways. Combined with Shotlock, players can quickly move Sora from platform to platform. Like previous games, combat is easy to pick up, but hard to master. Learning when to attack and when to block or dodge is vital to success.

Unfortunately, the Gummi Ship is back. If you liked it in Kingdom Hearts or Kingdom Hearts II, then you’ll be fine. If you didn’t, you’re not going to like it in Kingdom Hearts III. The overworld is now open-ended, which means you’ll need to manually fly to each location before you can warp to it. This wouldn’t be so bad if the ship wasn’t so slow to move around. Ship combat also lacks any of the finesse or spectacle the rest of the game provides. There’s not much visual indication or feedback your shots are landing. Though there’s far more customization than any previous Kingdom Hearts game, it probably would have been best to leave the Gummi Ship on the cutting room floor.

Kingdom Hearts III is the first full Kingdom Hearts title to use the Unreal Engine 4 and the results are spectacular. The game is downright gorgeous with plenty of attention to detail. Characters and environments are beautifully detailed with particular attention paid to the little things, such as burnt grass after casting fire magic. The game is a visual feast with all kinds of particle effects going off at any given time. Equally impressive are the Disney worlds, which authentically recreate the art style of the films. Seeing the toys of Toy Story come to life or the lifelike fur of Sully from Monster’s Inc. is extremely impressive. Snow effects make the world of Arendelle feel cold and the rolling hills of Corona’s forest feel lush. 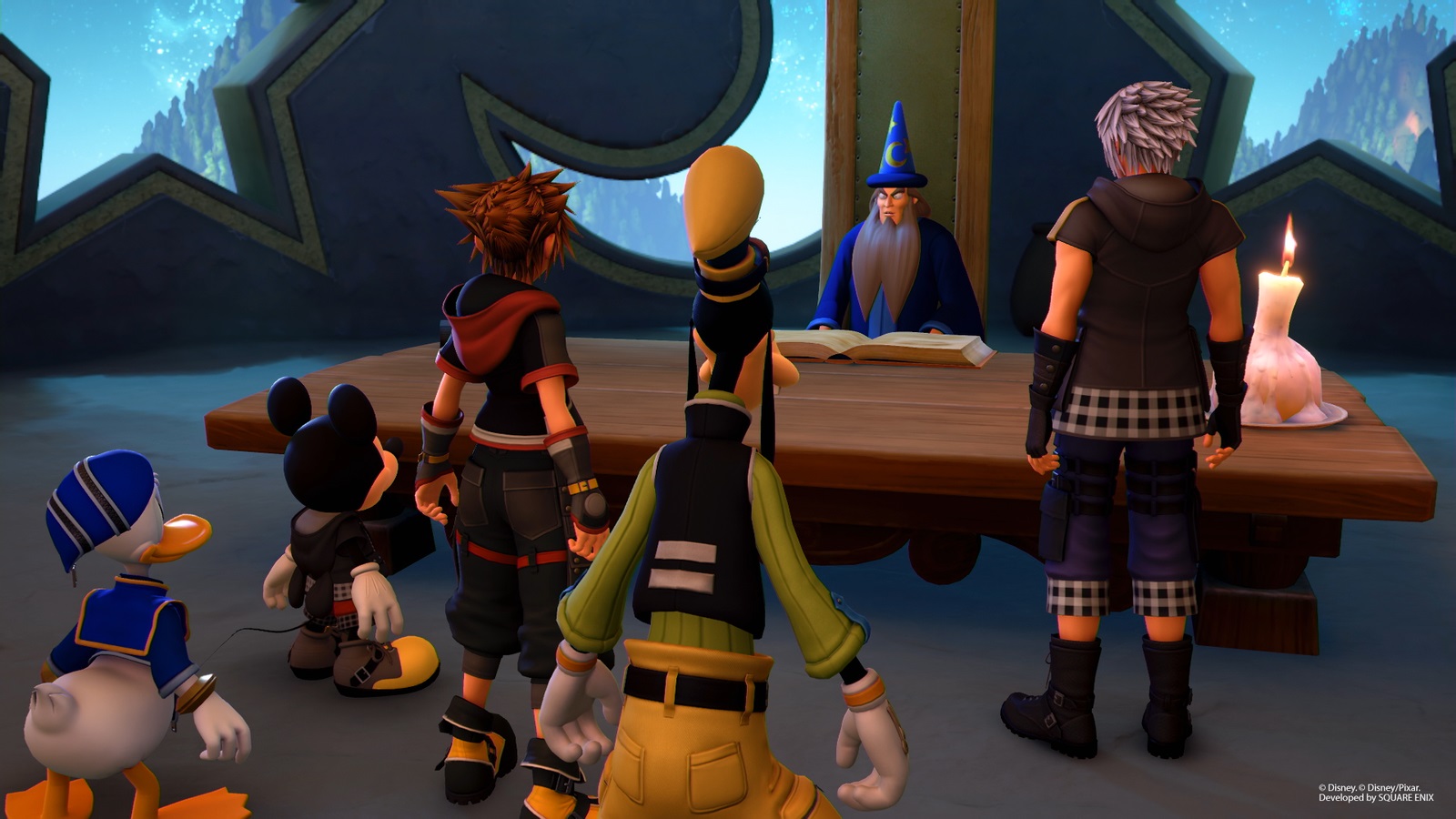 Yoko Shimomura returns to compose the soundtrack and manages to pull off a fitting sound for the end of the saga. New and old arrangements meet to create a wholly emotional soundtrack that’ll give longtime fans shivers. It’s also nice to hear her takes on some of the newer Disney worlds.

Kingdom Hearts III boasts an impressive presentation, but not everything clicks. Much like A Fragmentary Passage, III suffers noticeable framerate drops and frame-pacing when the action gets heated, even on the enhanced consoles. It was a noticeable problem back in 2017 and it’s disappointing to see it hasn’t been addressed here.

While the main cast is stellar, voice acting for Disney characters are a mixed bag. It’s immediately apparent who did and didn’t return to reprise their roles. Stars like Idina Menzel (Elsa) and Zachary Levi (Flynn Rider) make their worlds feel authentic, but the stars Square Enix managed to get are noticeable. There’s no better example than The Caribbean where the stand-ins for Will Turner, Elizabeth Swan, Davy Jones, Hector Barbossa, Cutler Beckett and Tia Dalma are terrible. The bad performances are distracting and pull from the enjoyment the worlds otherwise provide. Kingdom Hearts III nails the look and feel, but sometimes misses the audio mark. 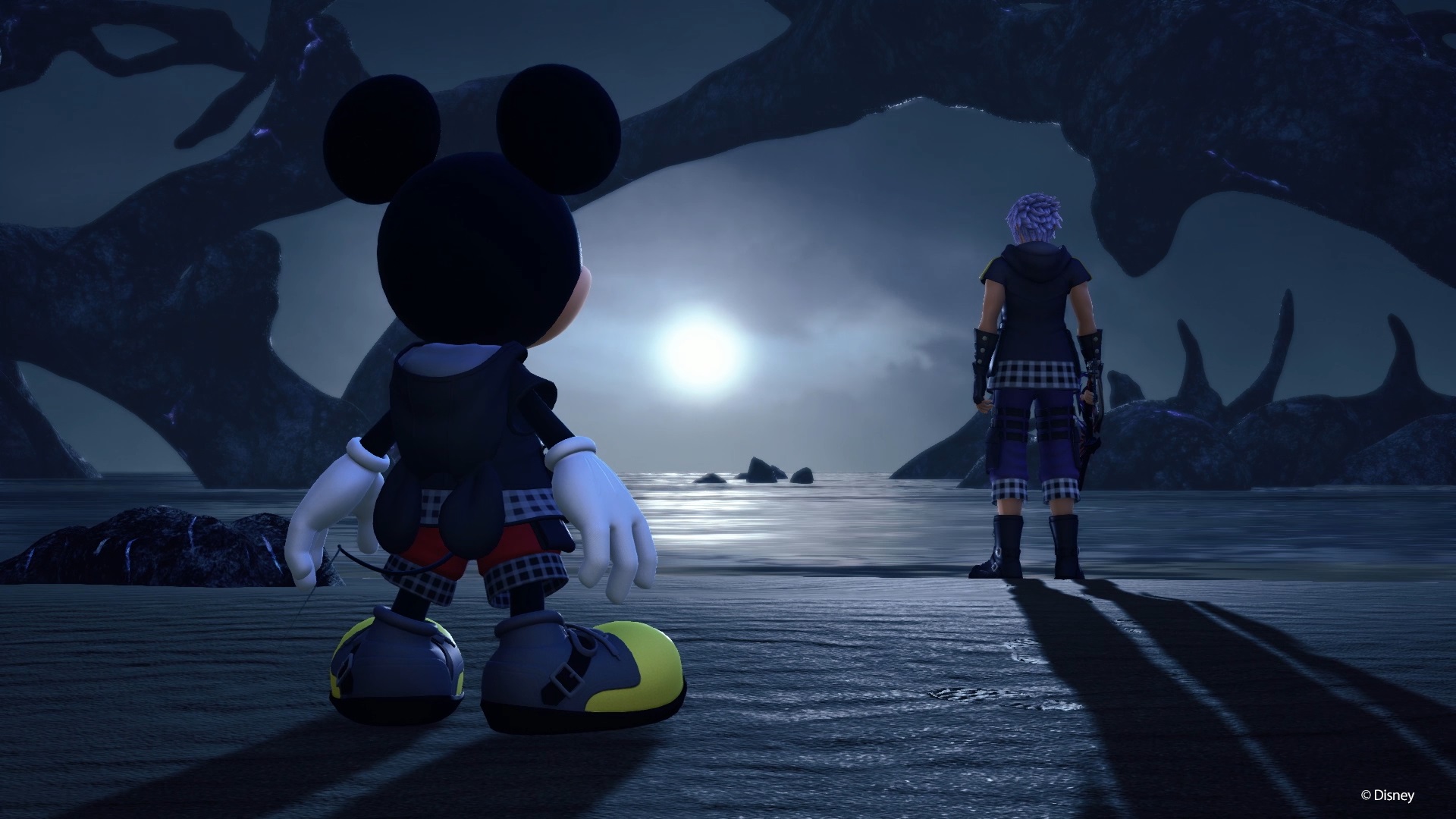 After seventeen years, the Dark Seeker saga finally comes to its emotional conclusion. Kingdom Hearts III wraps up Sora and Xehanort’s story in a satisfying way that still leaves just enough plot threads open for a new saga to begin. It’s the type of ending so few stories get these days, and it’s told with strong performances from talented actors and gorgeous graphics that capture all the spectacle. It also helps that Kingdom Hearts III is a fantastic game to play with high-flying acrobatics and a series of Disney worlds that show off the game’s mechanics. It’s not the perfect conclusion thanks to some pacing issues, uneven world selection and the Gummi Ship, but they do little to detract from what Kingdom Hearts III does well. From combat to story to graphics, Kingdom Hearts III delivers the magic, gut-punches and grandeur the series is known for. After nearly a decade of waiting, Kingdom Hearts III is the conclusion we’ve wanted and was well worth the wait.