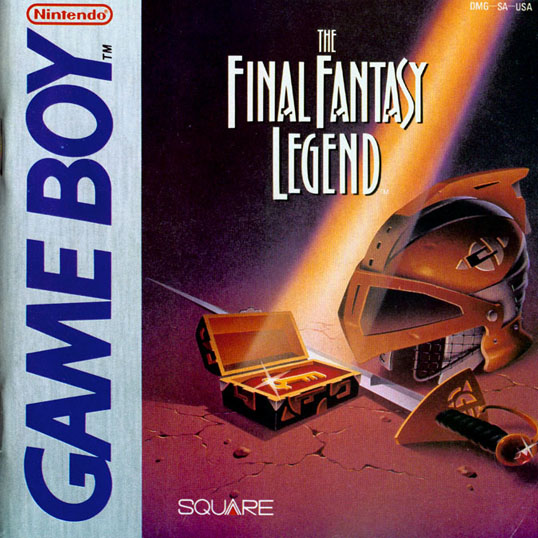 1990 was an important year for video games. A JRPG called Final Fantasy was released in the US that would eventually become one of the biggest franchises in video games. Final Fantasy was considered a big deal when it was released since there weren’t too many console RPGs on the NES and this was an ambitious title. Nintendo Power even released a strategy guide devoted to Final Fantasy. Another JRPG series was coming into existence at this time, SaGa, and its debut title was released in Japan in 1989 as Makai Toushi Sa-Ga, which translates to Warrior in the Tower of the Spirit World Sa-Ga. The Game Boy was still a young console and JRPGs were still a niche market in the states so the Square marketing team decided to rename this The Final Fantasy Legend, tricking parents everywhere that they should buy this for their kids who wanted Final Fantasy.

The Final Fantasy Legend’s story involves around trying to climb a tower in the center of the world that leads to paradise, which is threatened by the demon Ashura. The player needs to ascend the tower, visiting each of the four worlds along the way. The first world map is Continent, which is the basic fantasy world map, but in climbing the tower the player will explore maps based on Ocean, Sky and The Ruins. The tower isn’t initially accessible, but after completing quests and gathering specific items the passageway will open and the arduous journey through the tower can begin.

The player controls a party of four characters, but the party management system in The Final Fantasy Legend is rather complex. The player will pick a human, mutant (esper in the Japanese version) or monster at the start of the game as their main character and this choice cannot be changed. The player can then recruit three other characters from a guild and more powerful companions can be recruited at guilds in the later worlds. There are no traditional classes like fighter, mage, etc, but the type of the character determines how they function. Characters also do not gain traditional experience point based levels but gain power through other ways.

Humans are best suited for fighting but aren’t very good at magic. They have eight item slots in their inventory, for things such as weapons and armor, and increase their attributes by purchasing items that increase their hit points and other stats. Mutants are physically weaker but excel at magic. They only have four inventory slots so the player needs to be more selective about what they are given for equipment. Their ability scores seem to randomly increase after battle, giving the player less direct control over how they wish to develop them. Weapons and spells have a limited number of uses, so that needs to be taken into account when equipping your party. 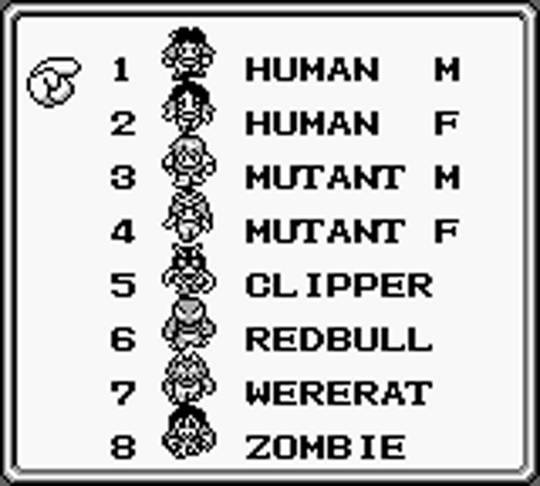 Monsters are a cool idea, but aren’t as useful as they could be. The main advantage monsters have over humans and mutants is that their weapon uses regenerate when the party stays at an inn, but their stats never increase and they have no inventory space. Monsters evolve when other monsters drop meat, and when a monster consumes this they can turn into another monster but this is a process of trial and error. An inexperienced player can eat all the dropped meat and get frustrated when they keep turning into weaker monsters, which is a possibility since the monster dropping the meat decides what the new monster turns into. Monsters are generally weaker, but some of them can get powerful toward the end of the game. Having a monster party can be an enjoyable but challenging way to play The Final Fantasy Legend, but this is recommended for experienced players or ones that at least have access to a guide.

The Final Fantasy Legend was challenging, or at least that’s how I remember it when it was new. There isn’t much hand holding or guidance in trying to navigate the world and the tower so most of my progression was done through trial and error. The absence of a leveling system separated it from other JRPGs. It was an interesting approach, but it did make it difficult to gauge if the party is powerful enough to venture into new territory. The random monster encounter rate was extremely high, making it easy to lose progress through some minor tactical miscalculations or bad luck, but a saving grace to this was that is was one of the few games from that era that allowed the player to save the game at any point outside of battle. Some bosses required special strategy. For example, there is an early boss that poisons any character that attacks with a melee weapon. This strategic element was nice, but it’s possible to end up in this battle where the party is set up where no one has any ranged weapons. By JRPG standards the game is short — someone who knows what they’re doing or using a guide could probably conquer it in under ten hours — but trying to figure it out on your own will extend playtime. 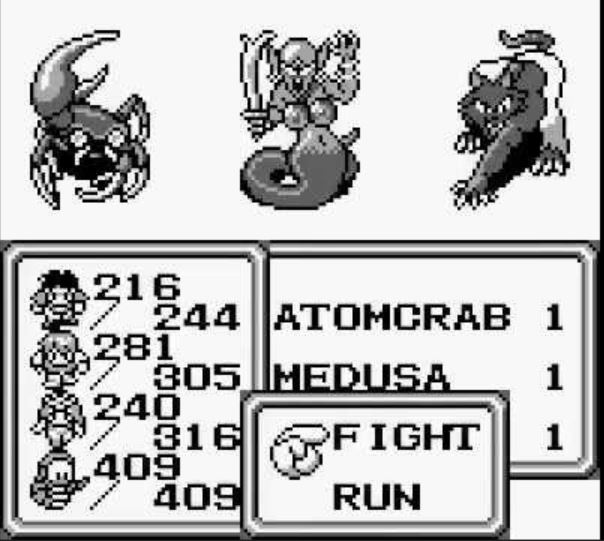 Despite its flaws, The Final Fantasy Legend is actually a rather good game. It shows every bit of its three decades and the absence of modern quality of life improvements may make it extremely frustrating for younger gamers, but for its time it was engrossing. Even so, fans of modern JRPGs could get some enjoyment from checking this one out if they mean to play it if for no other reason than to see how the genre has evolved. For its time it was an ambitious and advanced title, and while it may not hold up great by today’s standards, its influence in JRPGs is very apparent.