All it takes to be a real-life martial arts master is years of dedication, focus and training.  Start today and in twenty to thirty years maybe you too can be like water.  All the practice in the world won’t get you a force punch, though, no matter how nice the CGI effects in the best martial arts movies may be.  For this we need video games, and to really feel it there’s VR.  Kungfucious is a very early demo of a VR martial arts fighter where you can use chi skills to unleash powerful attacks while touching chi-blocking meridian points on enemies to open them up to critical strikes.  The current version is more proof-of-concept than representative slice of a final product, but I still found myself getting into it enough to accidentally punch my desk.

The game starts out in a cave with a few test dummies, one fixed and another hanging from a chain, plus a map on one wall and instructions for special moves on the other.  There are three chi moves total in the current demo, two of which are easy and one takes some practice.  The first move is a blue fireball with good range, summoned by holding your hands over each other and clenching them into fists, then a thrust move sends a blue flame shooting forward.  The ground shockwave is also easy; simply hold both hands over your head, clench, then thrust downward.  The force punch is a bit trickier, though, in that it needs your hand in the right spot to energize, indicated by a gentle rumbling in the controller.  Hold one arm out, rest the other at your waist palm-up, clench, then punch forward to release a yellow fist with a short range of attack.  The blue fireball and yellow fist both do the same amount of damage, so there’s no reason to favor one over the other, but it’s still cool to mix up tactics simply for the fun of it. 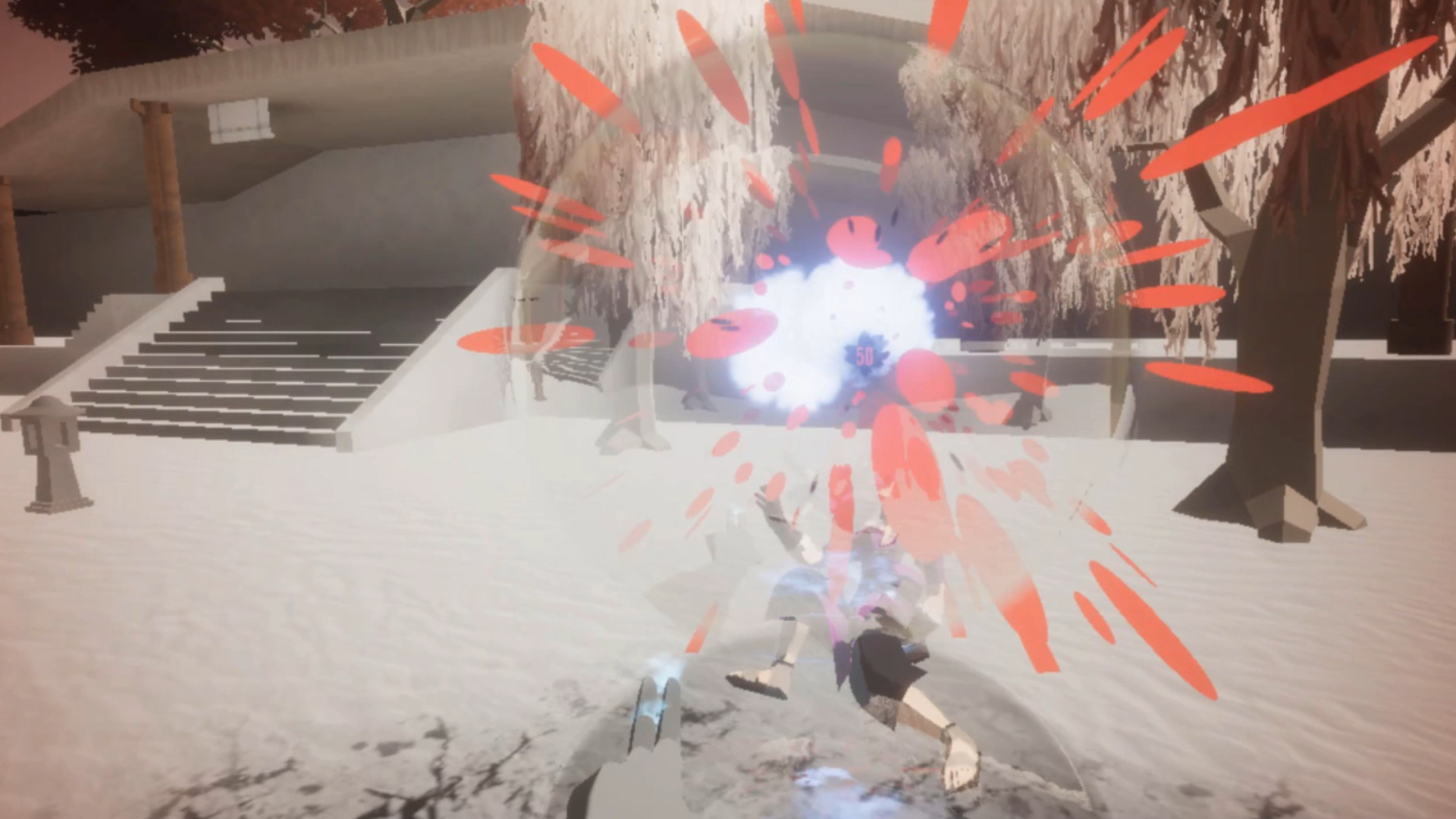 The cave’s test dummies also have a few lessons to impart, particularly about glowing pressure points.  When you clench just your lower fingers and leave the top ones pointed you get a blue glow at the tips, which you can then touch to the indicated spots on the dummies to trigger pressure points.  Do a couple in a row and a large red critical-strike ball appears, and punching it does a huge amount of damage.  The chained dummy has another lesson to teach and that’s about dodging.  There’s no health in this version, but the screen still glows red to let you know you’ve taken a hit, which feels particularly silly when it’s from a chunk of wood you just punched swinging back to smack you in the face.

After getting familiar with the basics it’s off to fight some actual people in a dojo setting, with five successive waves to defeat before victory.  The enemies are all the same character model in different colored outfits, getting stronger as they go, and the first fight is against a single guy who goes down fairly easily.  Movement is both teleport and arm-swing style, with the button on one move controller sending out a line that you pop over to instantly while the other controller lets you move forward and back in smaller, smoother increments as you adjust your arm.  It’s a little rough at the moment but with a bit of polish should let you get right to the battle and then give fine control for close-range maneuvering. 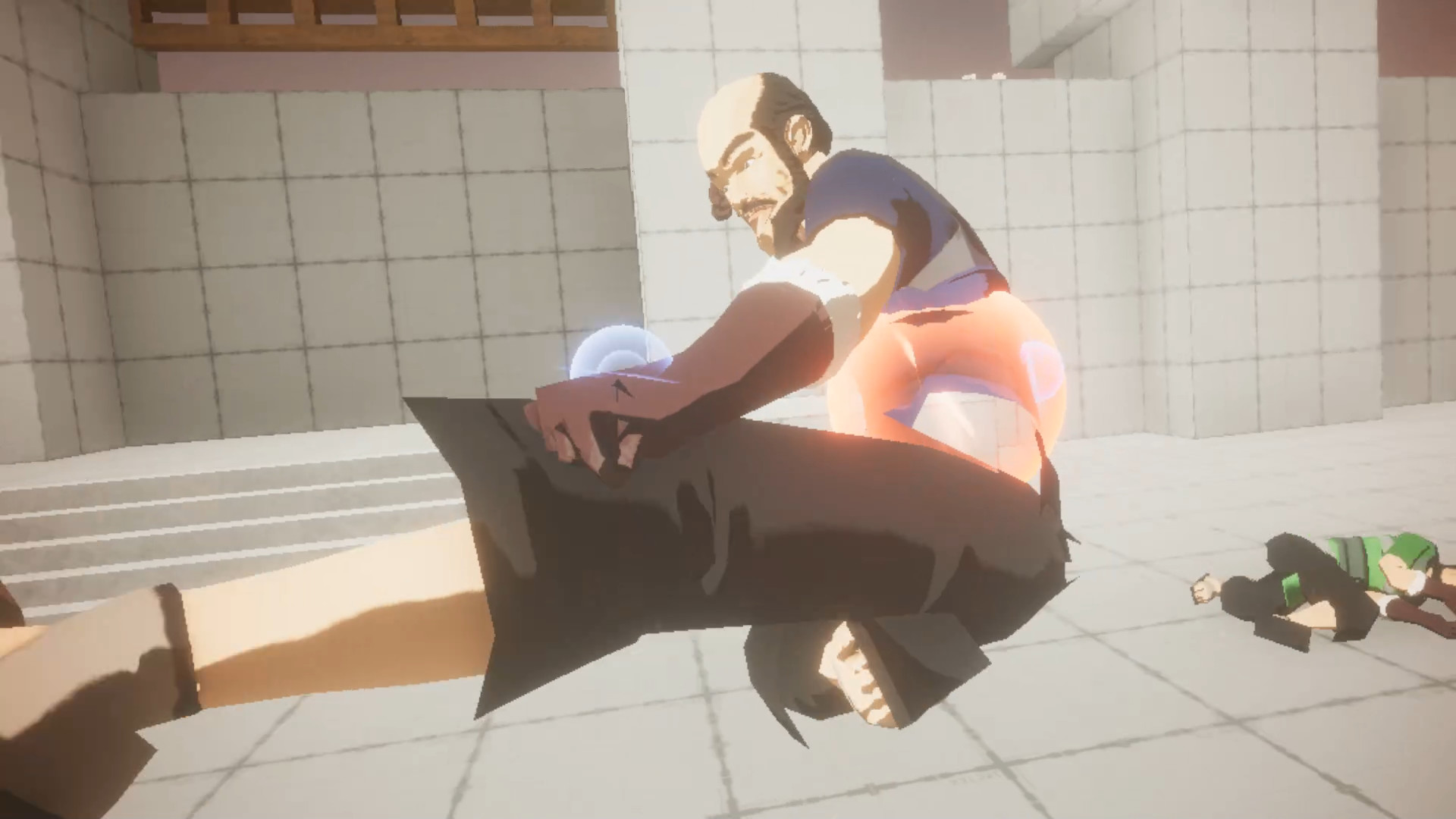 And then it’s time to punch some guys, although it’s worth noting that they’re still kinda dumb in this very early demo.  Everyone has a pressure-point or two lit up, but there’s more ways to attack than simply closing the range and poking at the critical-hit activation buttons.  Keeping distance and letting an enemy do a mid-level kick, for example, opens them up to a strong counter if you punch their foot away.  Alternately you can just wail on them like a speed-bag, watching the hit counter go up as you do.  The chi attacks are also fun to use, especially when the enemy charges in for an attack only to get a glowing golden fist of power right in the face.  Being surrounded by three enemies could be a problem but the ground shockwave is perfect for this situation, sending everyone flying every which way.  I did a couple of playthroughs of the demo experimenting with tactics, and while there’s no real threat in this build, it was a still a lot of fun to figure out how the various moves and skills fit together to feel like a chi-wielding martial arts powerhouse.

Kungfucious is rough, unpolished, but loaded with potential.  The current demo makes it look like a fantasy martial-arts Gorn, which sounds dismissive, but honestly isn’t a bad thing at all.  You can get the demo at the ever-helpful itch.io, or wishlist on Steam if you want to help the developer get a little more visibility.  There’s a lot of promise in Kungfucious and with a little luck and attention the game should be able to grow into something ridiculously entertaining, whatever that may end up being.