When The Division launched in March 2016, many fans quickly discovered that the game was more sparkle than substance. New York was rendered to a impeccable level of detail, but there was little to find or even do outside of the main questline. This improved over time and the game is an arguably excellent state right now. Still, these changes didn’t come fast enough for many fans and there are a few issues like Dark Zone cheaters still lingering. With The Division 2, Ubisoft and Massive Entertainment are aiming to not only address the original’s mistakes, but also pick up where it left off. Hardcore Gamer recently had a chance to spend several hours with the game and it looks like Massive might just pull it off.

Our session kicked-off near the beginning of The Division 2. Washington D.C. is already a shell of its former self and the first task was to secure a foothold in the city for the Division. It wasn’t a particularly notable mission except for the iconic status of its location, but it served as an effective tutorial. With that done and our first skills selected, it was time to head out into the city proper; this is where the game’s differences really started to become apparent. Washington D.C. is not the ghost town that New York was. There are pockets of survivors who’ve banded together and formed new settlements in the overgrown capital. As a Division agent, our job is to secure the city and protect these people. Completing main campaign missions helps, but they’re far from the only things that need doing before the city can be considered safe.

Missions have received something of an upgrade in The Division 2. It’s not that they’re radically different from what’s available in the first game, but rather that they’ve become longer and more involved. The first mission available after establishing the HQ involved raiding a hotel in an effort to recover a hostage. In The Division, that would have meant clearing out a couple room’s worth of dumb enemies and then moving into an open space to clear out a few enemy waves and a boss before seeing the mission declared complete. This wasn’t the case in here. The squad had to secure an entrance, fight its way through several corridors, secure the lobby and clear a path to the roof before finally taking on the named boss. That wasn’t mission complete though; we had to first return to the lobby and defend against reinforcements before extracting from the hotel.

Throughout this mission, the squad needed to make smart use of both cover and abilities. It’s no longer enough to all group up in one or two spots and just mow the enemy down. Combatants spawn in multiple locations now, make regular use of cover and will most certainly put pressure on players that don’t keep trying to find effective positioning. Some enemies are still the stupid melee chargers they were in the first game, but they are generally smarter than they were before. There are more special enemies that require specific tactics to overcome. Mini-gun carriers are always heavily-armored for example, and damaging them requires that squad-members first concentrate fire and break-off a piece of that armor off. That’s not the only case though; there are several enemy types that come later in the game whose appearance on the battlefield will force a change in strategy.

In addition to missions and side missions, there are strategically important control points that need to be taken and defended from the various enemy factions that have formed. Doing so will not only immediately reward Division agents with valuable loot, but it’ll also grant bonus materials and such via allied settlements. Doing these, the story and side missions had a tangible effect on the game’s environment. Enemy patrols in allied-controlled areas would decrease, settlements would visibly improve and the Division HQ would grow as new resources and personnel became available. Unexpected though it was, there was a real and gratifying sense of progression here. There is a fair amount of smaller activities to take on that won’t have this effect, but they’re rewarding and involved enough to be interesting all the same. As far as the early game goes, there’s plenty to do.

As for end game content, we had the chance to run through two “Black Tusk” missions with high-level gear and specializations unlocked. The Black Tusk is a paramilitary faction that shows up right at the end of The Division 2. They’re well-organized, well-equipped and relentless. Their objective in Washington D.C. is currently unknown, but it can’t be good. They’ll waste no time setting up occupying forces in most locations from the campaign as well as some new ones. The Division’s job isn’t done until the city is stable again, so it’s up to our agents to evict them. 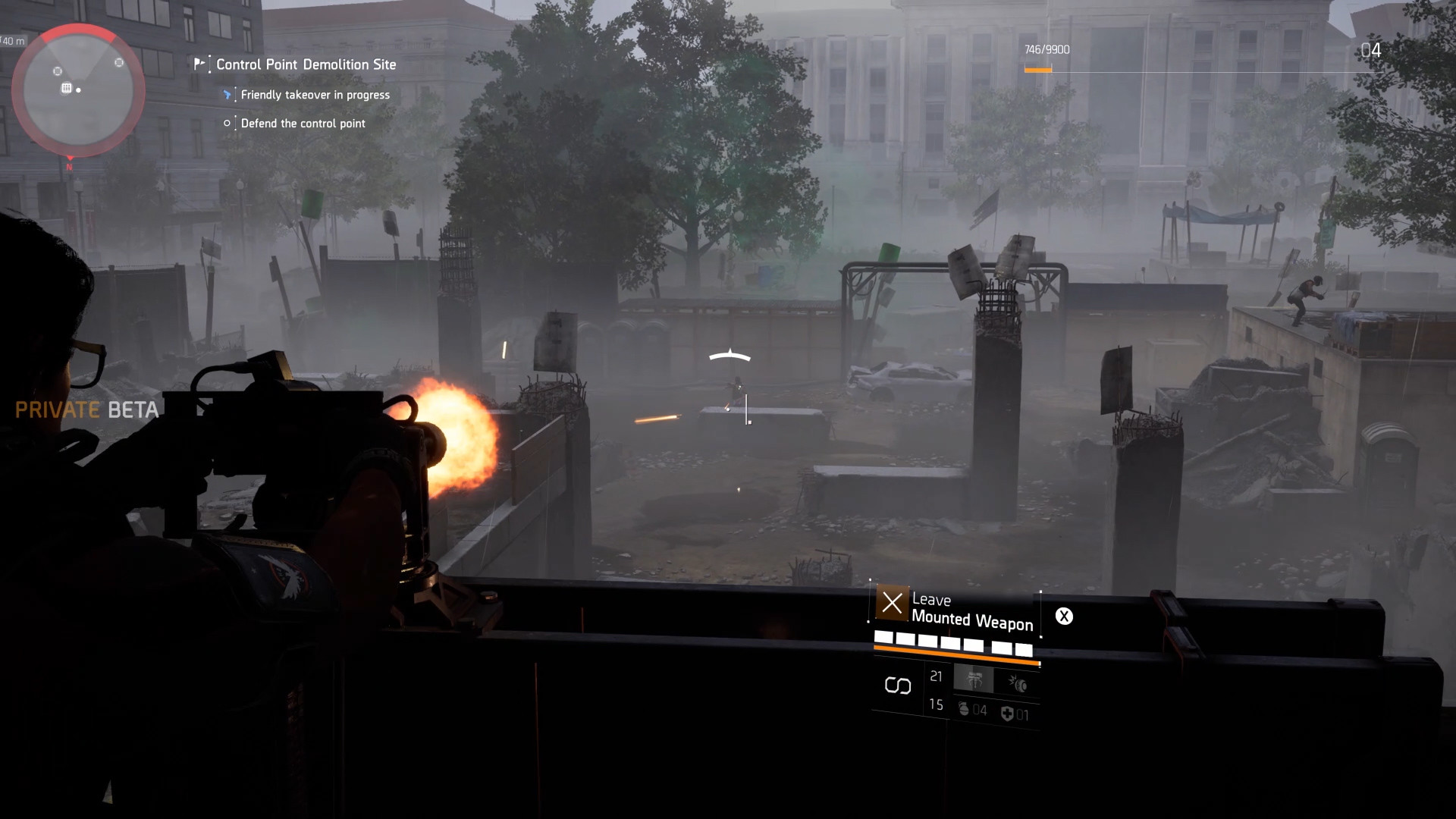 This is easier said than done. Black Tusk behaves differently from every other faction in the game and has access to gear that even Division agents can’t get their hands on. This includes mobile turrets and “Big Dog” robots with weapons mounted on their backs. The faction has similar generic units to the other factions, but their heavy-hitters and bots require different tactics to overcome. For example, the mobile turrets and “Big Dogs” like to run up to players and lay into them with heavy fire. They don’t get intimidated and take a significant amount of damage to bring down. So instead of trying to destroy them outright, agents would do well to immobilize them by shooting out the treads or legs. There might be bigger fish on the field alongside them, but ignoring these machines for any amount of time can prove deadly.

The Division isn’t completely outclassed, though. Agents still have their trusty “Shade Tech” and brand new specializations to rely on; combining these and solid teamwork was essential to overcoming Iron Tusk forces. Specializations grant agents access to powerful gear and bonuses that will give them an edge in end-game combat. Survivalists get a crossbow that shoots explosive bolts; demolitionists have a grenade launcher for blowing enemies out of cover and sharpshooters get a sniper rifle that highlights enemy weak points. Using these in concert with one’s other abilities is important in normal difficulties and will likely be crucial at higher levels of play. 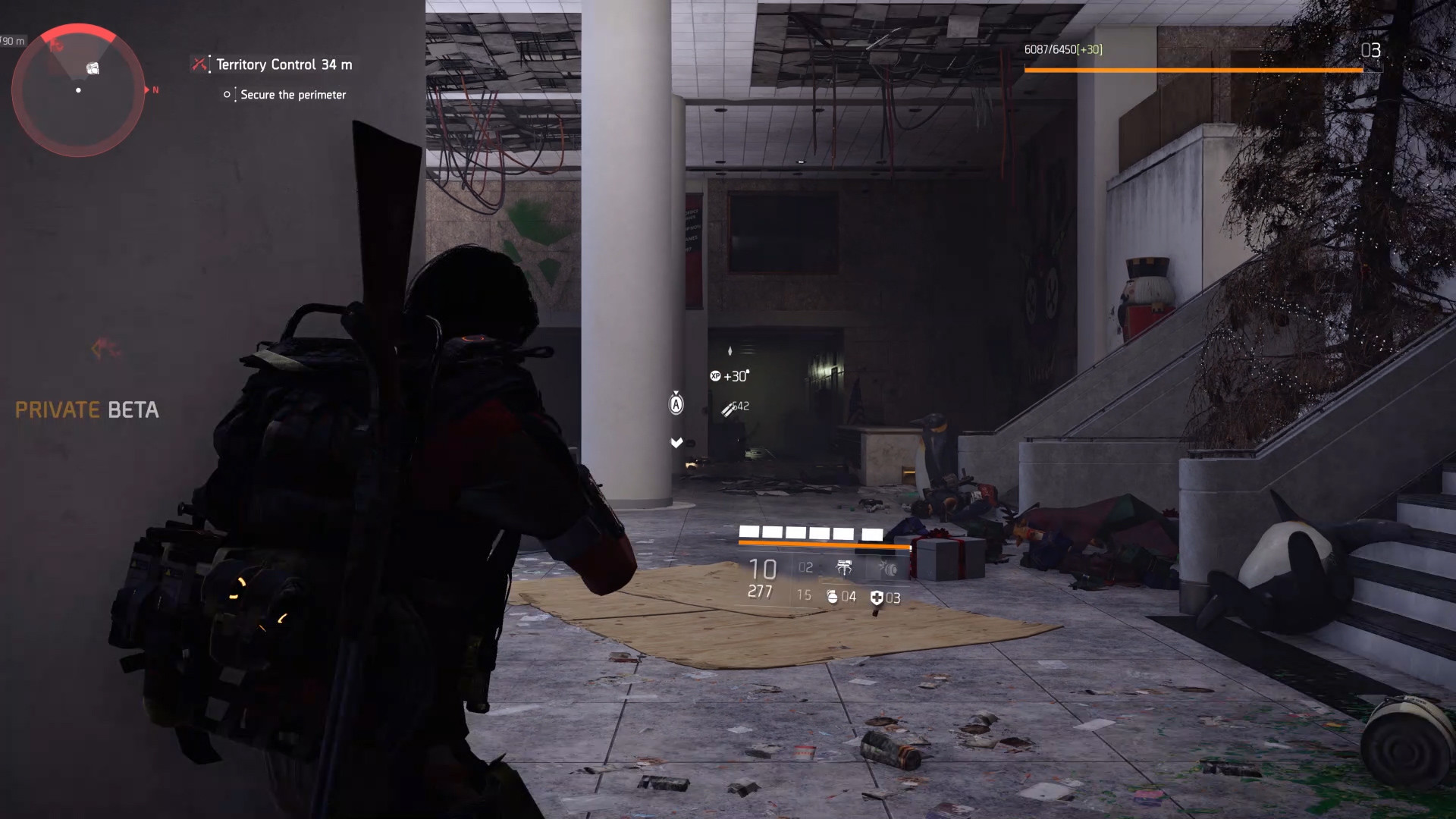 We didn’t get to see everything The Division 2 has to offer, but if these portions of the game are anything to go off of, Massive is doing everything it can to avoid the mistakes of the original game. There’s a fair amount to do here, the combat is enjoyably tense and the game’s overall presentation is excellent. Washington D.C. has been rendered with great care and even the music was noticeably cool. This is still The Division at its core, so those who weren’t all that interested in the first game probably won’t find all that much to change their mind here. For those who already invested in The Division or were perhaps hoping that the sequel would bring out the series’ potential, however, The Division 2 might just have what you’re looking for. Stay tuned for more info as the game’s open beta and release date draw closer.

The Division 2 launches for PC, PlayStation 4 and Xbox One on March 15.