The Lumines series sprang to life from the mind of Tatsuya Mizuguchi when he wanted to create something for the PSP but wasn’t quite sure what to do. A love of music made that a focus, but rhythm games were done to death. Instead, a puzzle game blending music and falling blocks was crafted and wound up leading to one of the low-key greatest puzzle game franchises ever. It was the perfect game to launch alongside the PSP as it acted as a bit of a then-modern day recreation of Nintendo launching the Game Boy with Tetris. In this case, Sony chose to support a project from a third party that they had no bundle deal with and still showed support for it — so much so that it was seen as an early killer app for the platform.

Lumines stood out from other puzzle games at the time thanks to its bright backdrops and extreme use of color. The widescreen layout of the PSP’s screen also helped too, but the concept felt held back a bit by the hardware. The lower-resolution display didn’t do justice to the rich imagery in the background and fans clamored for a higher-resolution offering. A PS2 release showed that the game’s bright visuals would benefit from a bit more horsepower, while the then-newer practice of DLC would allow for post-release content on modern hardware. Lumines Live! was the culmination of the original game’s vision with a more vibrant art style and has remained one of the best entries in the series’ fourteen year history. 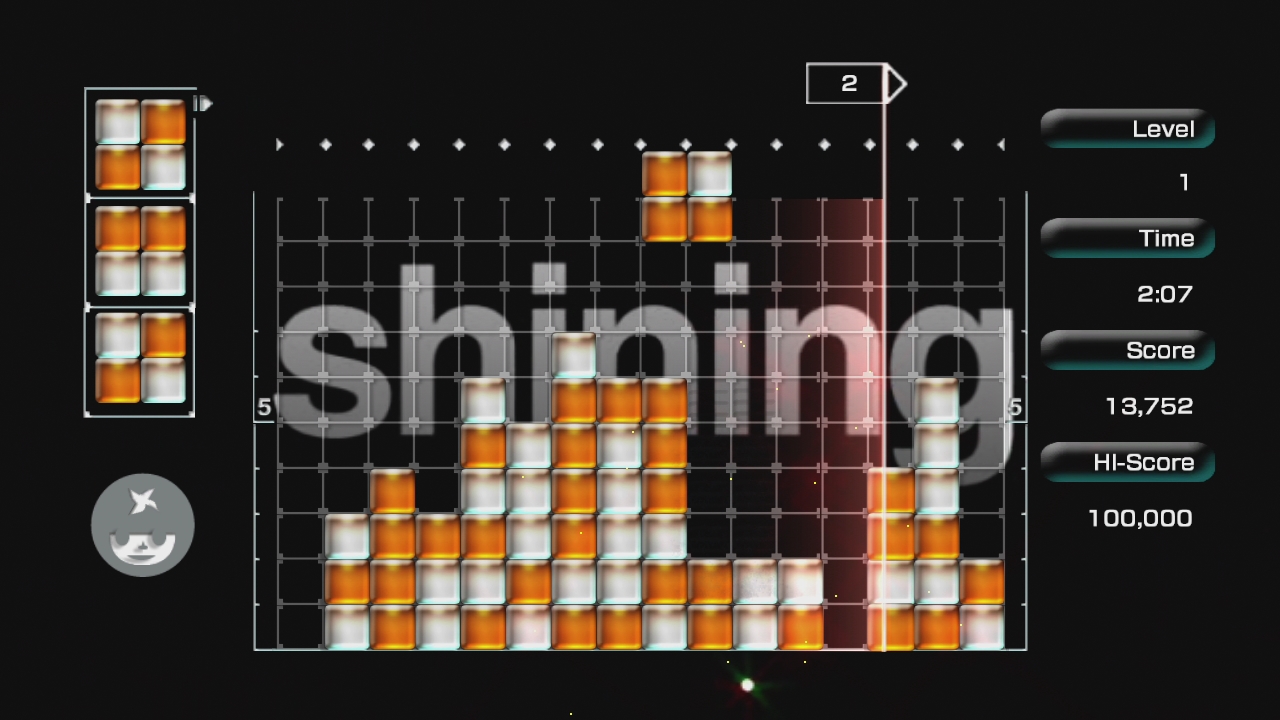 The core of Lumines is a simple, but addictive formula. As a music beat blares, blocks of four fall from the sky. You want to drop and rotate the 2×2 blocks into arrangements of four and send them off-screen. Your formations will be a block of four colors at once, a checkerboard with each corner getting one of the two available colors and then a block of four with three blocks of one color and a fourth of the other. How you arrange these blocks determines how many groupings you can take down at once or in rapid succession.

Live changed the design a bit by crafting the skins for the new areas before the music — allowing for a shift from before where all of the music was figured out first and then the stages were designed around the music. This new approach changes the pacing up a bit and makes the game slightly more manageable, with less rapid-fire stage design and color changes. Getting to a certain point total will still change the entire design around, and unlike most games that do something like this, it’s a dramatic shift. You don’t just have changes in colors, but also changes in how your “blocks” look. They may appear circular akin to a record and then have a border that blends into the background. This allows for stages to stand out while also keeping you glued and hoping to clear the area just to see what’s to come. 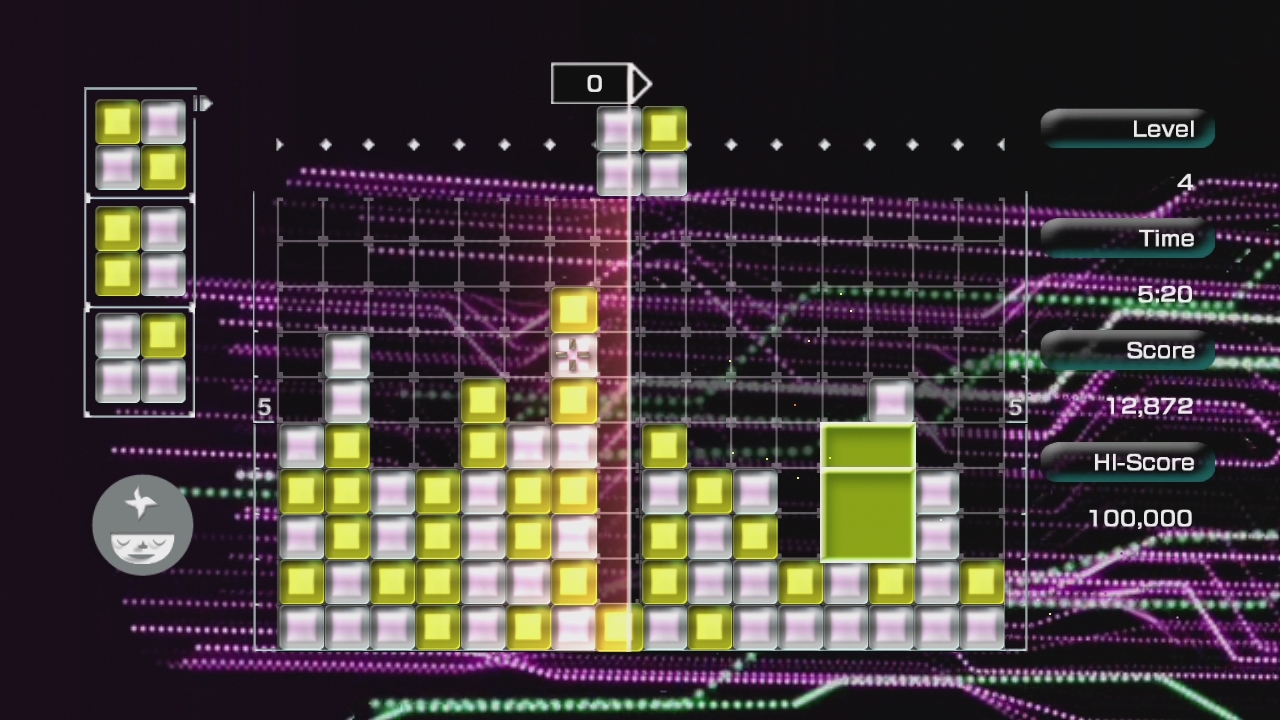 Live offers up more modes than before, with Time Attack challenging you to not only do your best, but beat the clock as well. The game featured a ton of DLC, with the Tokyo Club Mix Package being some of the best music ever heard in a puzzle game. The inclusion of Genki Rockets music is always a win and every song in the pack is full of energy. Live encouraged replayability with its high volume of unlockables. Beyond new profile images for the game, you could get things like new stage designs, level skins, and even craft new playlists. Beyond just having a lot of music and stage options, you can also battle AI rivals and give yourself a greater challenge steadily. There’s also a fantastic endurance mode after you unlock it, and it’s addictive to start things and see how much progress you can make.

Visually, Lumines Live is still a great-looking game. It’s aided by puzzle games never really needing to break graphical barriers. Instead, focusing on keeping colors sharp and vivid for all manners of HD displays. The power of the 360 was used to ensure that there are smooth transitions between stages to avoid slowdown and odd hiccups in the presentation. Everything looks great and with the simple d-pad-centric controls alongside the A button, it’s easy to learn the controls and master them after you learn the timing. 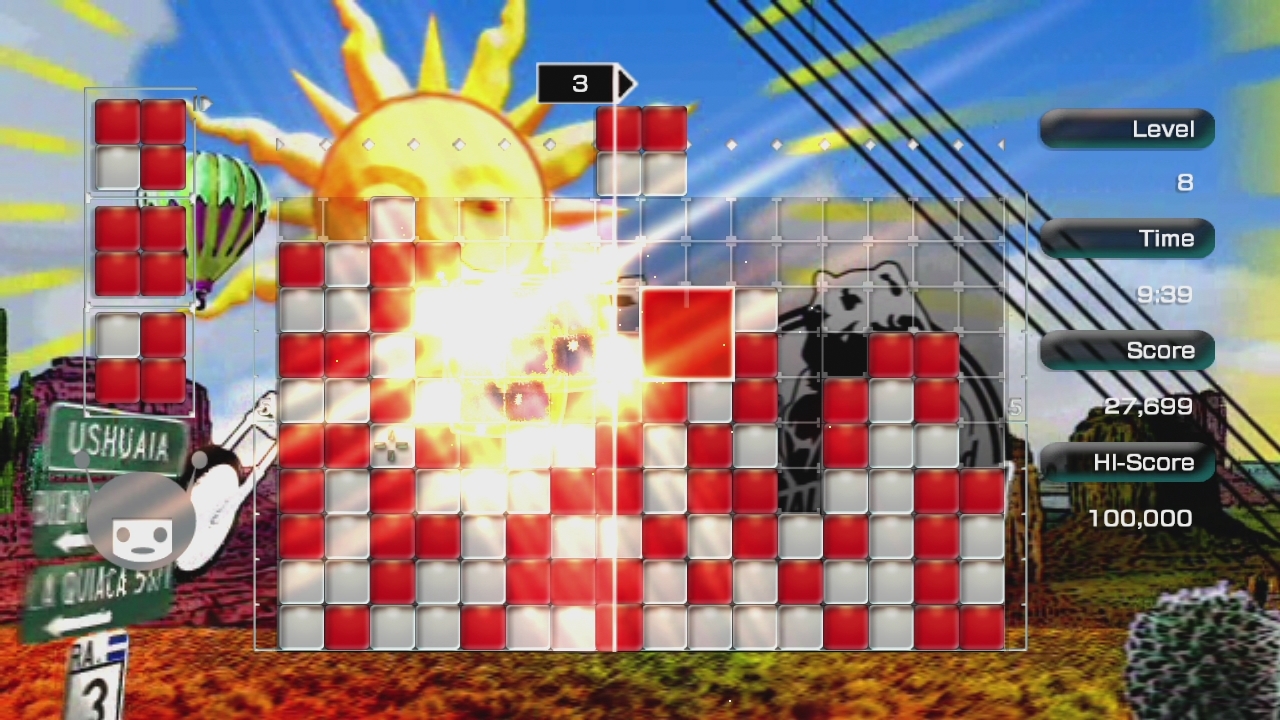 Musically, Lumines Live is simply outstanding and showcases a lot of dance and techno music. The soundtrack is infused with j-pop and gets your blood pumping from beginning to end. It’s an exciting soundtrack and it ties into the core sound design nicely. As you make matches, you’ll have a satisfying effect play when you clear it and that goes double for when you chain combos together. It’s tough to chain things together at first, but does get easier as you learn the most efficient placement for blocks and how to make sure you maximize their effectiveness. The soundtrack is clear too, with lyrics sounding exactly as they should — but being enhanced by a good pair of headphones or a nice home audio system allows for it to be truly appreciated.

Lumines Live! is available on the Xbox 360 and the Xbox One via backwards compatibility — and its DLC is reasonably-priced. There’s a ton of content and those who want to buy it physically can enjoy a version that also includes Rez HD and Every Extend Extra Extreme. That version is great for the 360, while modern console owners will want to stick with the digital version and enjoy it on either the 360 or Xbox One. It’s a fantastic puzzler and one of the finest examples of the genre on consoles now.