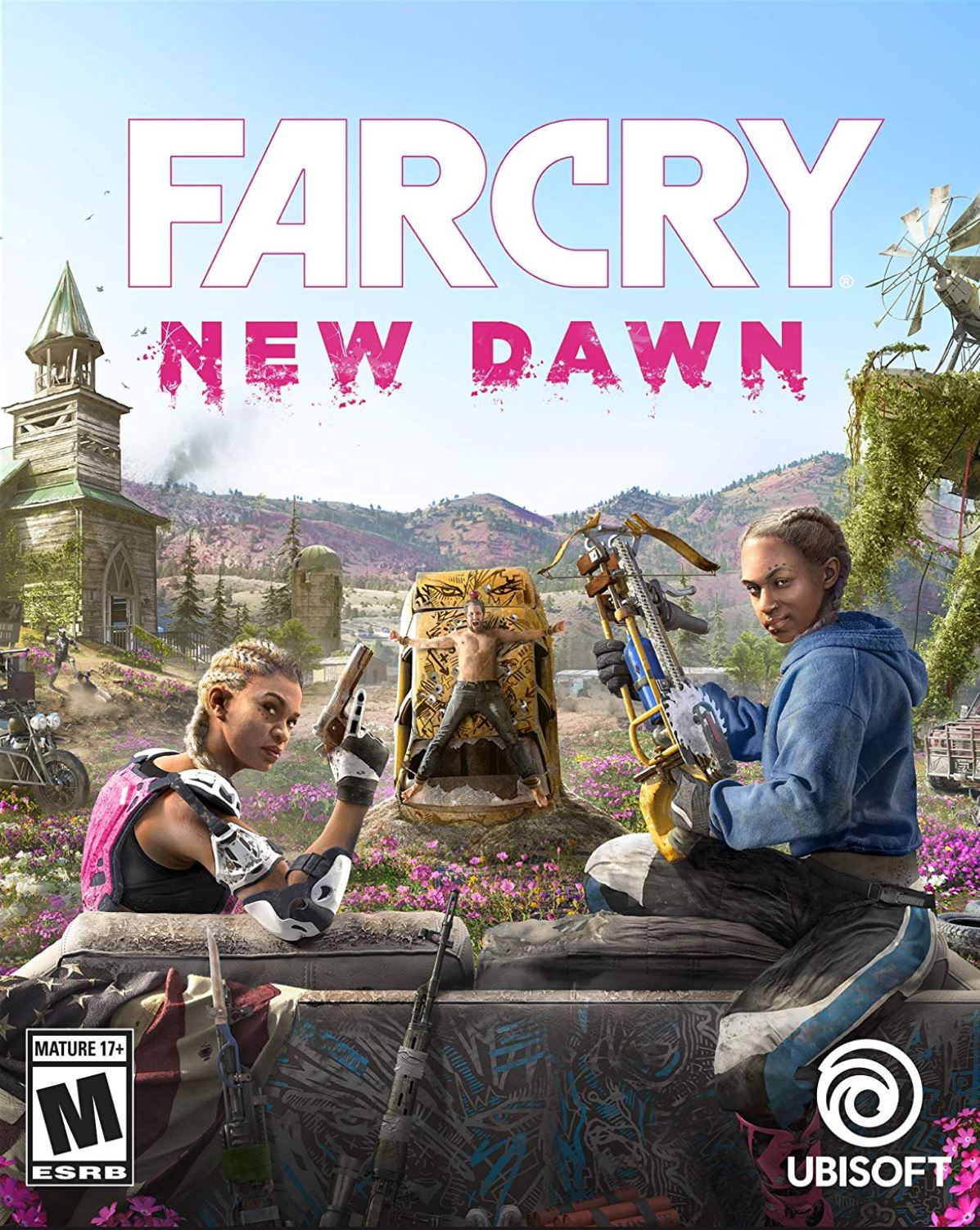 The fallout of nuclear war seems to manifest itself differently depending on which video game you’re playing. Nevada is a desert wasteland occupied by green mutated people and deathclaws, California is fields of skulls overrun with homicidal machines and Russia is in a state of nuclear winter with giant rats and crustaceans. Montana is a bit different. Despite only seventeen years having passed since the nukes went off there appears to be almost no areas with life-threatening radiation; at least the citizens of Hope County are blissfully unaware of it without any geiger counters. The plants appear to be thriving even better than before, with lush green overgrowth and pastel flowers, almost as if radiation is more beneficial to plants than the sun’s rays. The color of the animals seems a bit different and some are afflicted with slight monsterism, but overall it seems that nuclear holocaust was the best thing to happen in Montana, making it the most beautiful environment after an apocalyptic makeover.

Such is the case in Far Cry: New Dawn. Fair warning, major Far Cry 5 spoilers ahead, so just skip to the score at the bottom if you wish to finish Far Cry 5 unspoiled. Far Cry: New Dawn is a direct sequel to Far Cry 5. Joseph Seed aka The Father, leader of the doomsday cult Eden’s Gate, wanted to usher in a new world free from sin. His plan included setting off a bunch of nuclear warheads, reinforcing the belief that it’s probably not wise to put fanatical cult leaders in charge of social reform or environmental policy. The bombs go off, Hope County gets obliterated and the survivors spend a few years living underground until the surface is inhabitable again. They seem to be making a good go at things until about seventeen years after the bombs fell and some people called the Highwaymen arrived, replacing the threat of murderous piety with some post-apocalyptic piracy.

A region can change a lot after the passage of seventeen years and the detonation of nuclear bombs, but there’s plenty of familiar things to see for returning Far Cry 5 veterans. Eden’s Gate is still around, rebranded as New Eden, but they’re not the villainous force they once were. Now they just hang out up north living a technology-free lifestyle with something like an Amish Viking thing going on. Several characters have returned, such as Pastor Jerome, Grace Armstrong and Hurk Drubman. A scavenger hunt exists in Far Cry: New Dawn called Dear Photograph which allows players to compare pictures of how certain locations used to be compared to their current state. 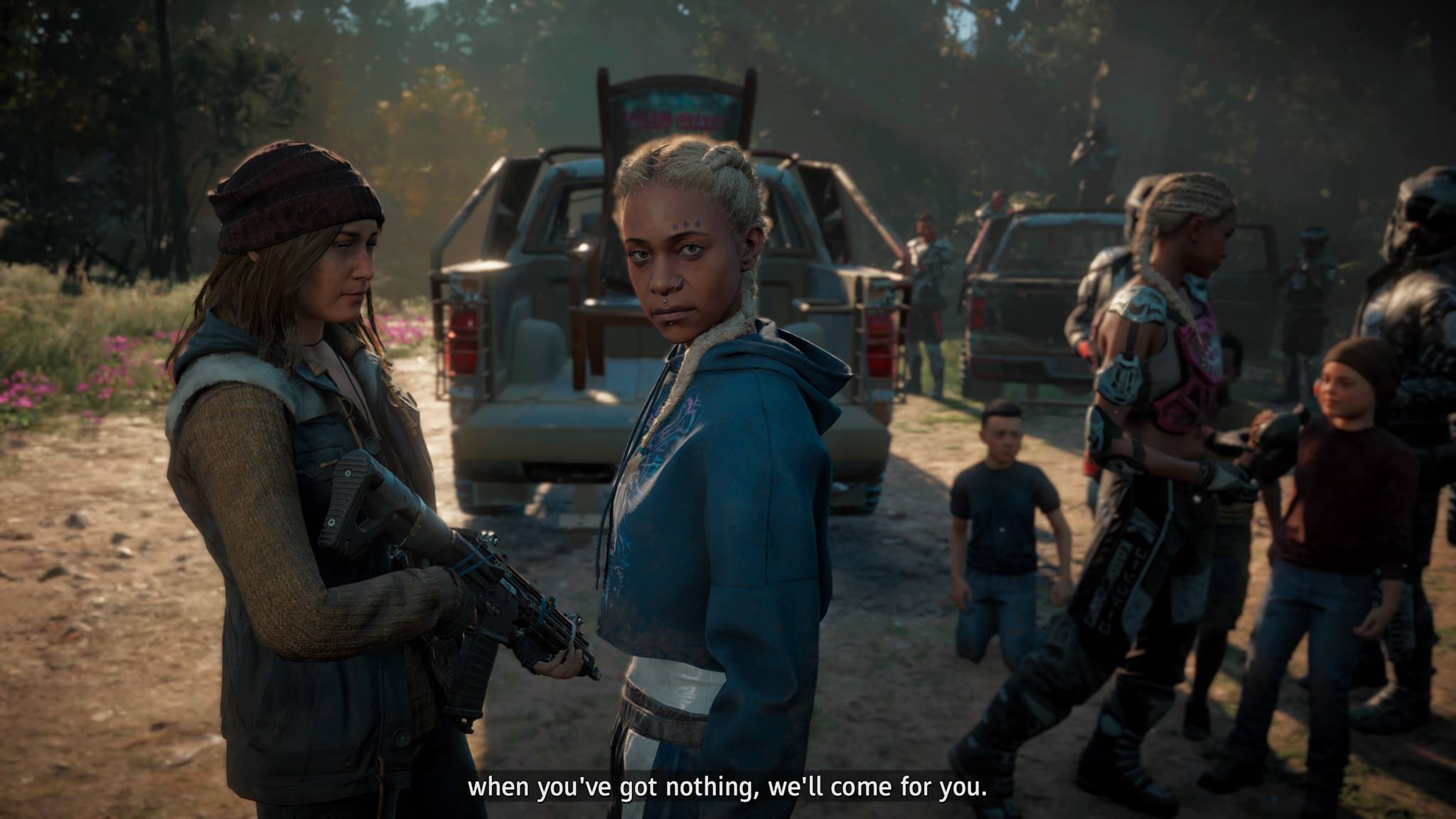 The Highwaymen are the new threat to the rebuilding efforts in Hope County. Led by the malevolent twin sisters Mickey and Lou, these two lead a murderous gang of marauders who look like how the world of Mad Max would if they were inspired by motocross instead of biker gangs. To contrast the Twins to the Father, Joseph was dangerous and evil but tried to be a charismatic leader who hid behind the facade of bringing good to society. The Twins are straight up vicious and have no delusions about trying to be the good guys. The Highwaymen are all about themselves, and travel the country scavenging and pillaging everything to suit their needs and wants. Their reputation precedes them and some communities will take the path of least resistance and give into their demands since they will take what they desire by force if they have to. At the start of the game the player is traveling with Thomas Rush on a train to Hope County to assist with the rebuilding efforts. They Highwaymen derail the train, take Rush captive and kill everyone on the train save for the player and Carmina Rye. The player and Carmina travel back to Prosperity that serves as the main community in the fight against the Highwaymen.

Far Cry: New Dawn’s gameplay will be familiar to any Far Cry fan. The first-person open world exploration is largely unchanged from the previous entries. Combat is a mix between action and stealth against human enemies and the wildlife is unusually aggressive, which we have attributed to being afflicted with Bestial Ubisoft Feral Aggression Syndrome (BUFAS) where all animals are homicidal maniacs with the disposition of a Tasmanian devil. This is a case of if it’s not broke don’t fix it since combat in Far Cry titles is generally enjoyable regardless of what particular approach is being used. The variety of weapons includes the traditional things such as throwing knives, shotguns, Molotov cocktails and other assorted firearms and blunt objects but there are some new additions. The saw launcher is essentially a crossbow that fires buzzsaws and it is as fun as it is ridiculous. 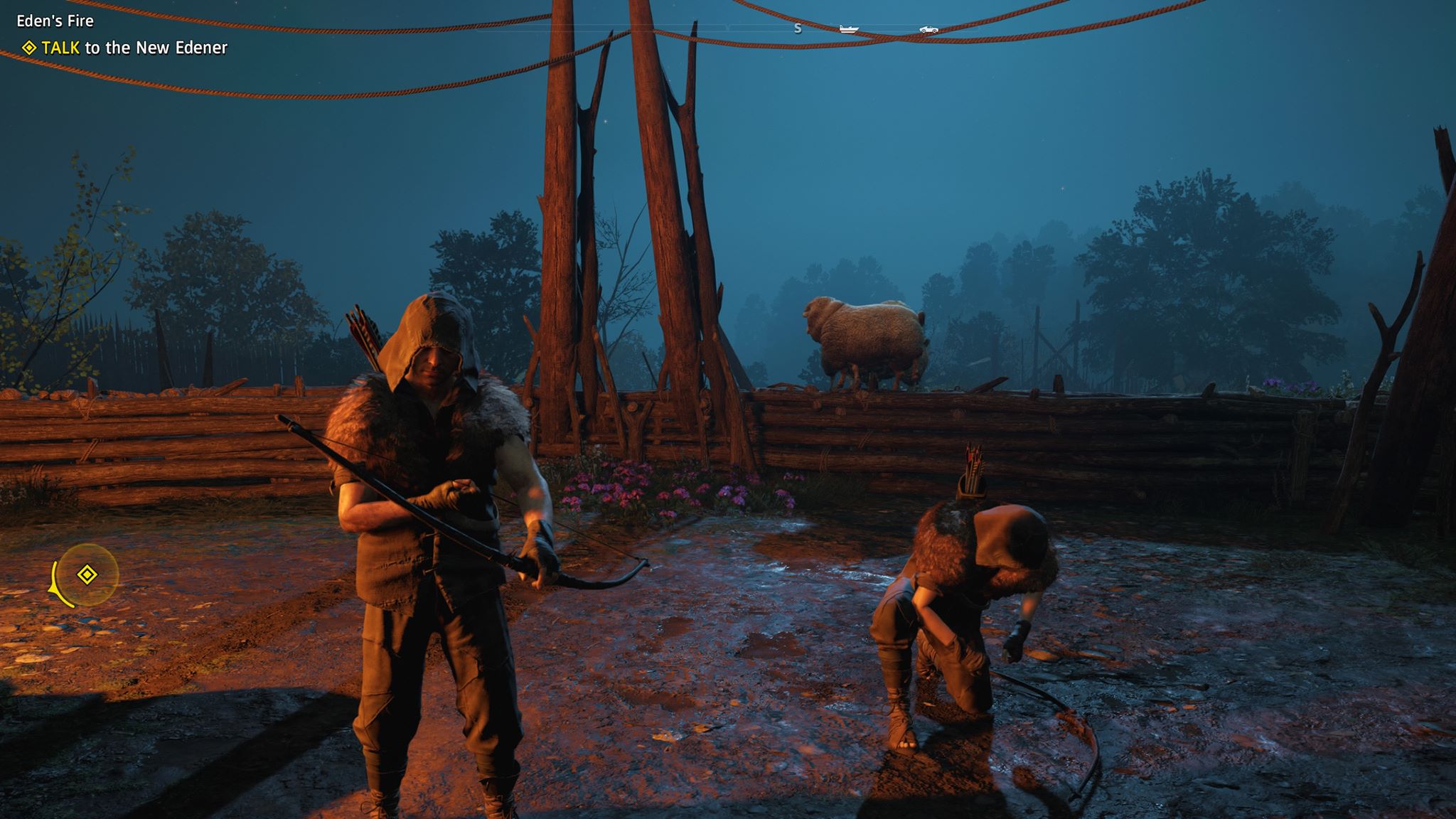 Instead of the grind of conquering the different regions under control of the Seed siblings in its predecessor, the new grind is collecting ethanol and rescuing specialists to help level up Prosperity, though this doesn’t feel as much of a grind as Far Cry 5. Ethanol is exchanged like experience points to level up the different facilities in Prosperity and it can be obtained in supply drops, hijacking ethanol tanker trucks and by taking over outposts controlled by the Highwaymen. Outposts function like they did in previous Far Cry titles, but there’s a twist in Far Cry: New Dawn. Upon capturing an outpost the player can choose to salvage the outpost, which nets some ethanol and relinquishes control back to the Highwaymen. This will cause the outpost to increase in level and be guarded by stronger Highwaymen units, but will yield greater ethanol rewards when it is captured again.

Something new in Far Cry: New Dawn are the expedition missions. These are where players can make use of Prosperity’s resident pilot to travel to a location far away from Hope County to score some valuable resources. The objective of these expeditions is to find the supply drop in the far away location, retrieve it and return to the extraction point without getting killed. The first available mission takes place on a naval ship known as the HMS MacCoubrey with some other expeditions taking place in recognizable locations. 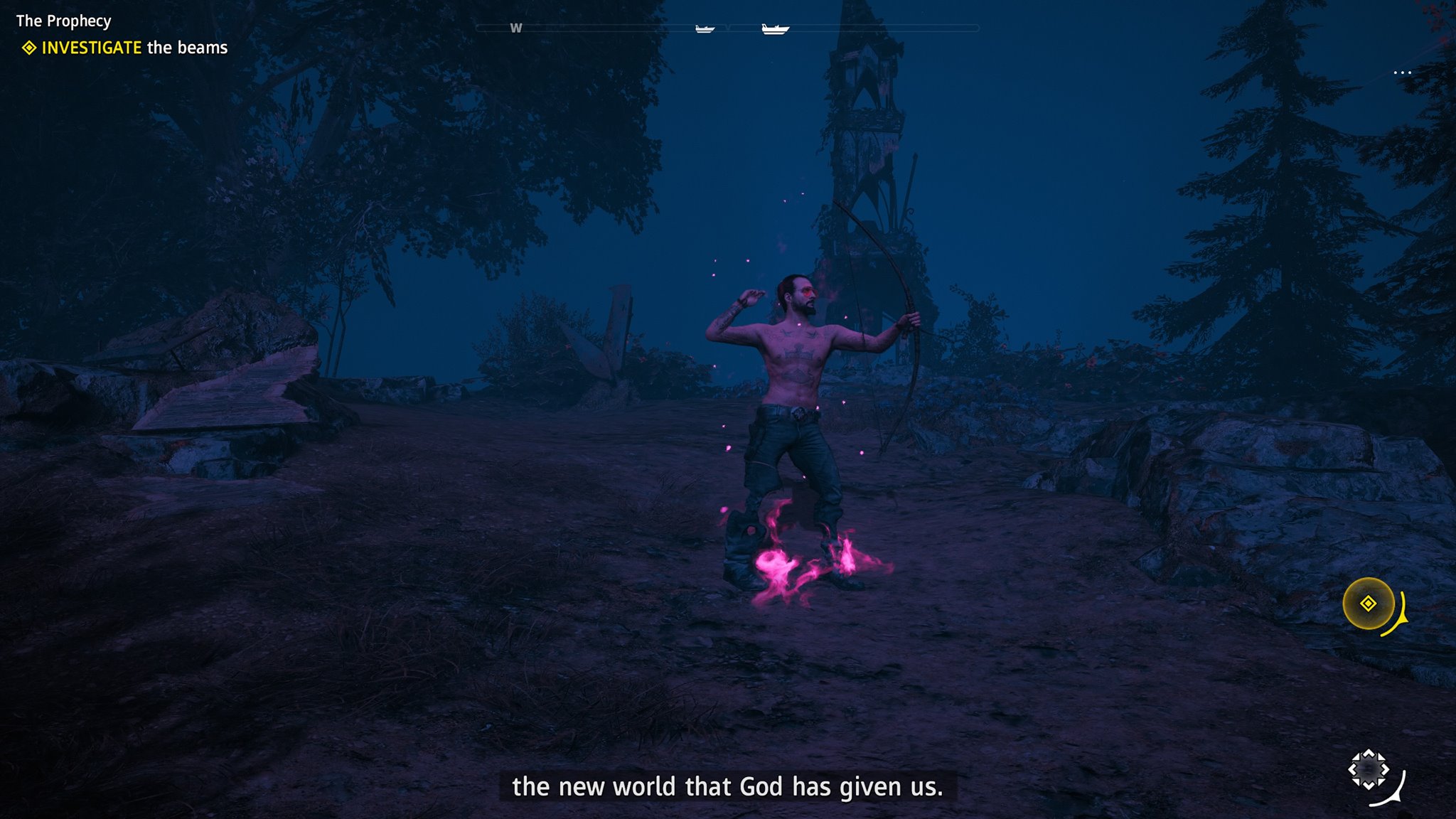 Far Cry: New Dawn uses a Light RPG system. The character doesn’t gain levels but by completing objectives they earn perk points that can be redeemed for perks like an extra weapon slot or a grappling hook. Ethanol spent on upgrading town facilities can increase the player’s health and rank of their guns for hire and fangs for hire along with making new equipment more accessible. The game progresses through the completion of missions. Main story missions are given through prominent characters and are necessary to complete the main campaign, but there are plenty of other activities to keep players occupied. There are several collectible challenges to be completed and amusing hired help to recruit.

From a technical standpoint, Far Cry: New Dawn had no major issues during the review process, the framerate remained consistent and no game crashes occurred. The graphic quality is on par with recent Ubisoft titles and the artistic direction was pleasing to this reviewer. The decision to make the resurgence of plants more vibrant and colorful prior to nukes dropping is an interesting decision but does allow for a good contrast with the unpleasant state of affairs. The same can be said for the coloring of the wildlife where the new animal appearances serves as a reminder that this is not the same Hope County it was almost two decades ago. The voice actors do an excellent job bringing life to their characters, and the dialogue is a good blend of being a serious narrative, but characters like Nana deliver one of the all time funniest lines from a video game to help keep things light. Co-op multiplayer allows players to join in with a friend’s game on a whim, which can be played through any story missions, but this is especially enjoyable when taking over outposts. The biggest negative is that vehicle controls are not as tight and responsive as they are in other open world games like this, such as Grand Theft Auto or Saints Row. 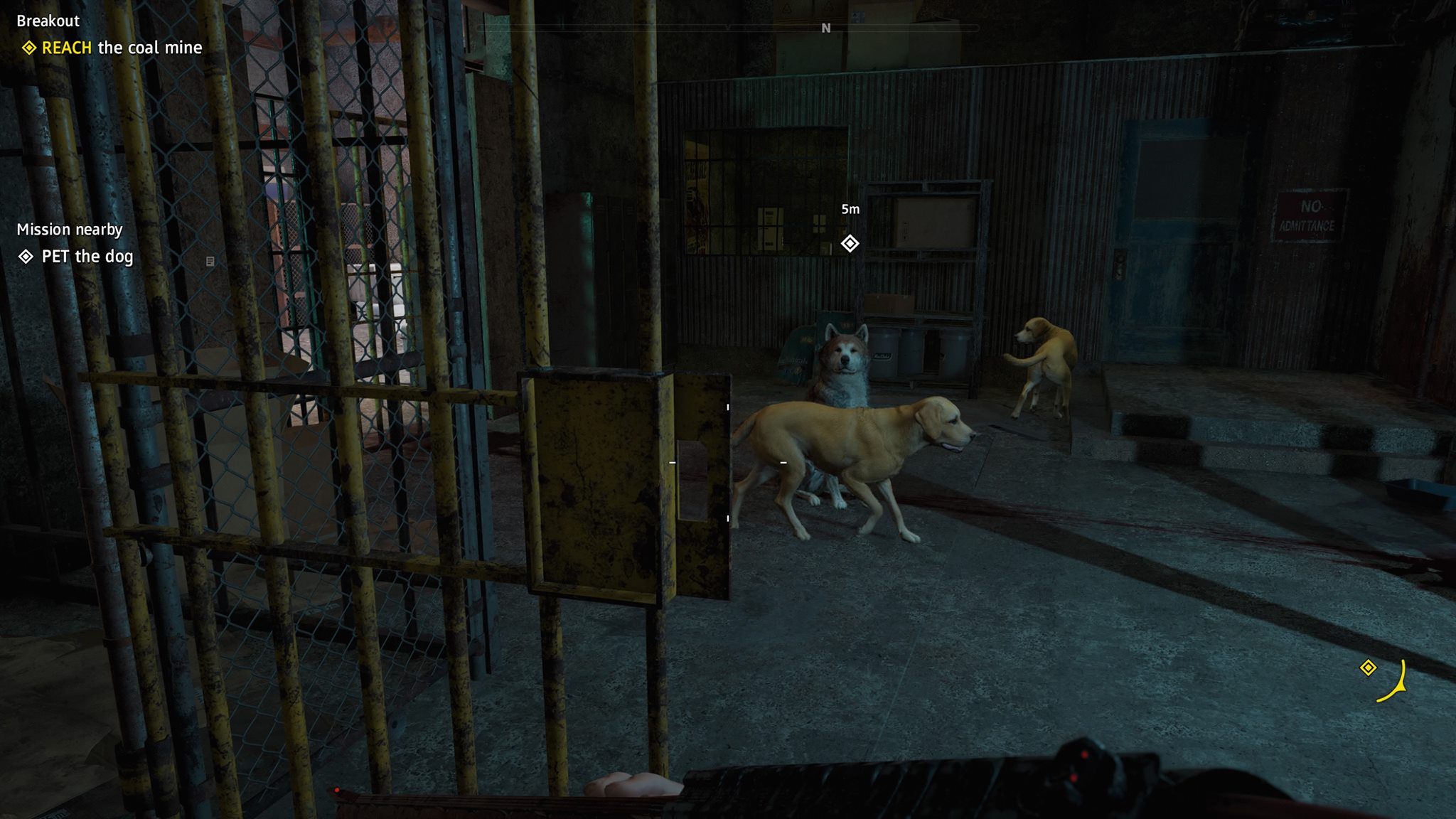 Far Cry: New Dawn is an unexpected but welcome continuation of Far Cry 5. Hope County was an enjoyable setting, filled with memorable characters in conflict against one of the more compelling Far Cry villains, so it’s nice to return to it and help clean up the mess from the disaster Joseph Seed orchestrated. As a standalone direct sequel the full package doesn’t seem as robust as its predecessor and no season pass has been announced nor is there any Arcade Mode, but the launch price is well below the standard MSRP for a title like this. The expedition missions and building up Prosperity change up the Far Cry formula a bit, but beyond that this does follow the same template they’ve been using since Far Cry 3, which depending on your opinion of sticking to that formula is either good or bad. People who enjoyed Far Cry 5 and its colorful inhabitants, however, should consider Far Cry: New Dawn a mandatory title.