This may be hard for people who weren’t alive in the ’90s to believe, but once upon a time The Simpsons was one of the greatest things to ever grace a television screen. During the early ’90s, the animated prime time sitcom was a cultural phenomenon and no merchandising opportunity was untouched by their yellow four-fingered hands. This naturally included video games and also contributed to the mindset that video game adaptations were often done by people who had at best a rudimentary knowledge of the source material. Bart Simpson’s Escape From Camp Deadly is one of several attempts to turn a family sitcom that doesn’t naturally lend itself well to an action game into an action game.

There are exceptions and things seem to have generally improved, but games based on licensed properties in the ’80s and ’90s were maligned and more often than not with good reason, with the NES titles Friday the 13th and X-Men perfect examples of this. Bart Simpson’s Escape From Camp Deadly is further proof that having an incredible license to use for a game will not save a bad game. Admittedly, this is far from the worst licensed game out there, falling slightly on the favorable side of the halfway point on the continuum between mediocrity and dumpster fire. Under no objective criteria would this game be called good nowadays, but back in 1991 when The Simpsons license meant something and the novelty of the original Game Boy was still relatively fresh, there was some platforming fun to be had here, just not very much of it.

Bart and Lisa Simpson are dropped off at Camp Deadly, run by Mr. Burns’s nephew, Ironfist Burns. Ironfist Burns runs Camp Deadly with the intention of making the experience as miserable as possible for the children. Being stuck at a miserable camp makes for a miserable video game, so in an attempt to liven up the gameplay, Bart and Lisa plot an escape from this hellish summer camp. The plot of this game is similar to the fourth season episode Kamp Krusty, but this game is actually not inspired by that episode as Camp Deadly was released in November 1991 and Kamp Krusty in September 1992. Aside from both of them featuring summer camps being disasters, there really aren’t any similarities between the game and episode. Unlike the game, Kamp Krusty is an episode from the golden age of The Simpsons and is required viewing for every Simpsons fan. 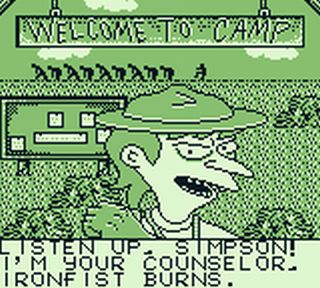 There are a few nods to the animated show within Bart Simpson’s Escape From Camp Deadly, but its incorporation of the source material is so limited this easily could have been a generic platformer that had The Simpsons brand slapped on it in hopes to garner sales and publicity. Ironfist Burns does have a family resemblance to the Burns; perhaps this is what Charles Montgomery may have looked like at the turn of the twentieth century. Whenever Bart takes damage the entire screen freezes so he can say his catch phrase “eat my shorts,” which based on the game’s difficulty will grow tiresome before the first level is over. Aside from the actual Simpsons family and Nelson Muntz, no other characters from the show are present. The enemies are generic bullies and overgrown hornets and spiders, but this is given an implied explanation in the game with the few tunnels filled with radioactive material Bart has to traverse. The player will only play as Bart with Lisa showing up in random locations to give him boomerangs or special outfits, such as beekeeper and radiation suits.

The gameplay is uninspired. Bart’s primary weapon is spitballs which are about as effective in combat as one would expect, but thankfully Lisa is there to provide him with boomerangs that are actually very useful. The first level is a game of a capture the flag, where Bart travels through the woods, fighting generic bullies and overcoming some basic platforming while needing to grab the flags in order to progress. The second level is the cafeteria, where Bart collects the succulent cuisine such as fried smelt and food fights his way through the cafeteria. Amp up the difficulty and repeat this sequence for levels three and four. After that it’s time to climb the mountain to get to the other side of Camp Deadly, then it’s back to the woods at night with an alarming number of unattended campfires and sleeping bears before descending into another radioactive sewer before shutting off the lights at Camp Deadly, which somehow signals Homer, Marge and Maggie to show up and do a celebratory dance since Bart and Lisa have successfully escaped and shut down the summer camp Marge and Homer sent them to so they can get some peace and quiet at home. The story here actually makes the nonsensical plot of the otherwise extremely fun Simpsons arcade game look well thought out. 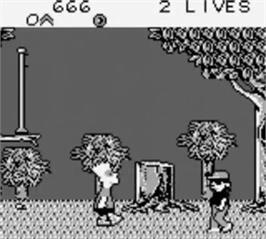 Bart Simpson’s Escape From Camp Deadly is not one of the better Game Boy games or even one of the better Simpsons games. Admittedly, despite how bad it is, I did get some enjoyment with it a long time ago. The game is short — an expert could probably beat it in under a half hour — but it does have a brutal difficulty. A lot of this comes from the hardware, since the screen is so small some enemies will almost be on top of you the second they appear and the lengthy two second freeze that occurs every time Bart is hit can disrupt the flow of the game. Hardcore Simpsons fans may want to check it out just for the history, but this is a title that wasn’t that great to begin with and has only deteriorated with age.