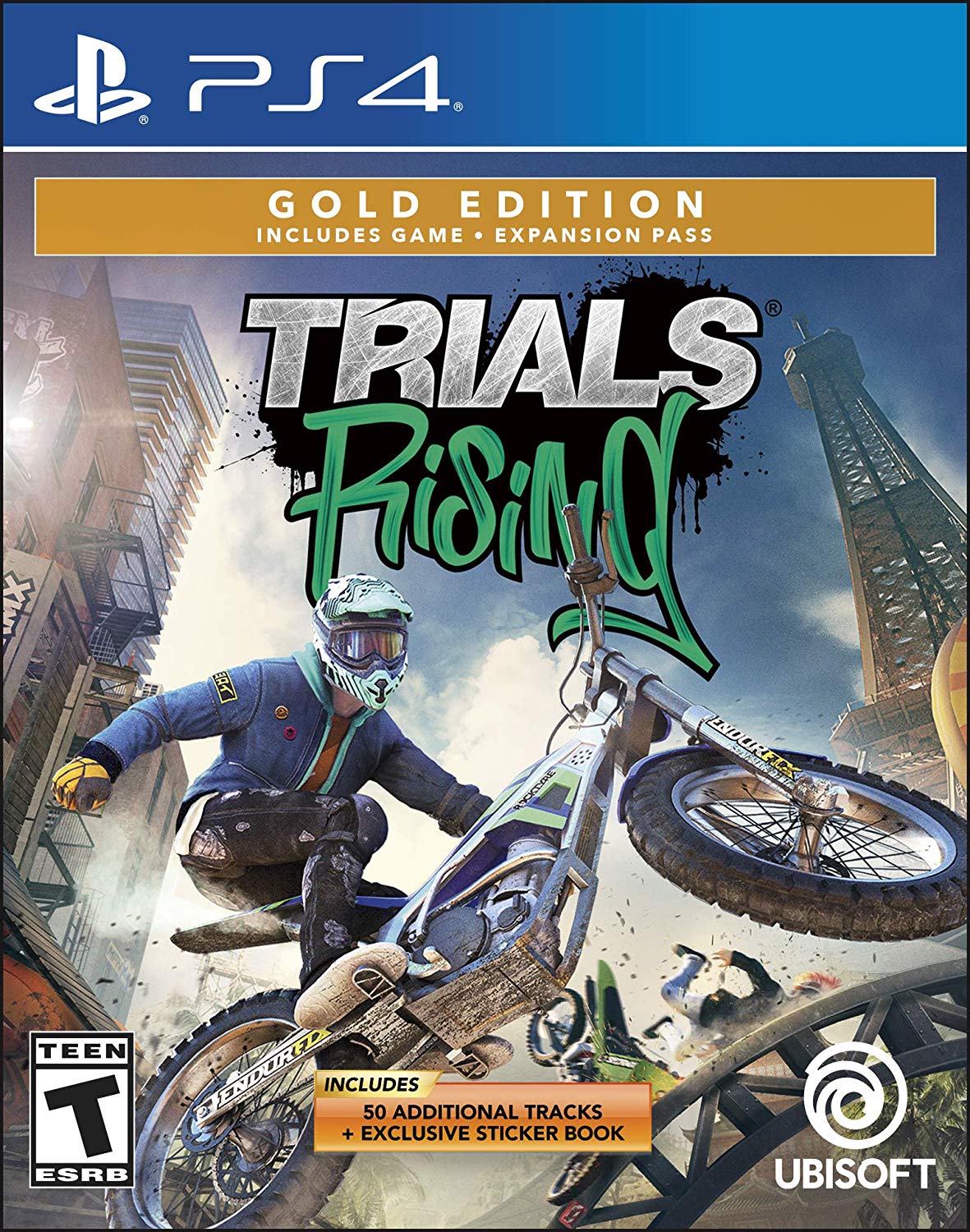 The concept that drives the Trials series is extremely unique in design. Trials Rising looks to be Ubisoft’s definitive version of the title as the development team at RedLynx hopes to capture the feel of some of the original titles and merge it with modern standards. A dirt bike or trials bike game that is designed to be a platform game that makes you think quickly on-the-fly doesn’t really have any competition, feeling something like Sonic the Hedgehog but with trials bikes. RedLynx introduced some new concepts with Trials Rising with mixed results, but ultimately still remains a fun game.

The base of the Trials series, at its core, is its physics engine. Transferring weight from the back of the bike to the front and vice versa, along with combining speed and momentum, results in an addicting experience with sometimes hilarious results. The levels get increasingly difficult as one of the main aspects is a lot of trial and error. Doing flips and positioning yourself to properly land and keep speed all become unified as you get better with the game. You may just have to play some portions multiple times to figure out the best way to progress. In single player, you will race ghosts that have set times with some events either requiring challenges to be met or simply beating the opponent. The opponents are a mix of real player times, AI times and times set by specific developers.

The setting for Trials Rising is much like a world tour as you will progress and unlock events in different continents. There is a Trials University to help train and hone your skills on the track and a challenge section that eventually gets unlocked that has you playing fun mini games that showcases the hilarious exaggeration of the physics engine. Games such as trying to slam dunk a basketball or see how far your rider can bounce off of barrels are certainly good for a laugh. You will find yourself bouncing around events with different environments that embody the area of the world you’re in. Lumber yards in Canada, rocket launches in Russia and city landscapes in major cities keep things fresh. There are also a few different bikes to choose with varying attributes such as being heavier and offering a better top speed or being light and agile. Two of the bikes are literally a BMX bike and a scooter, with the scooter being extremely difficult. The tandem bike allows for two people controlling one bike, as each person makes up 50% of the input and if one player falls off, hilarity ensues as you take jumps with a corpse hanging off the back of the bike. You can also bail on your teammate just to be a bad friend. 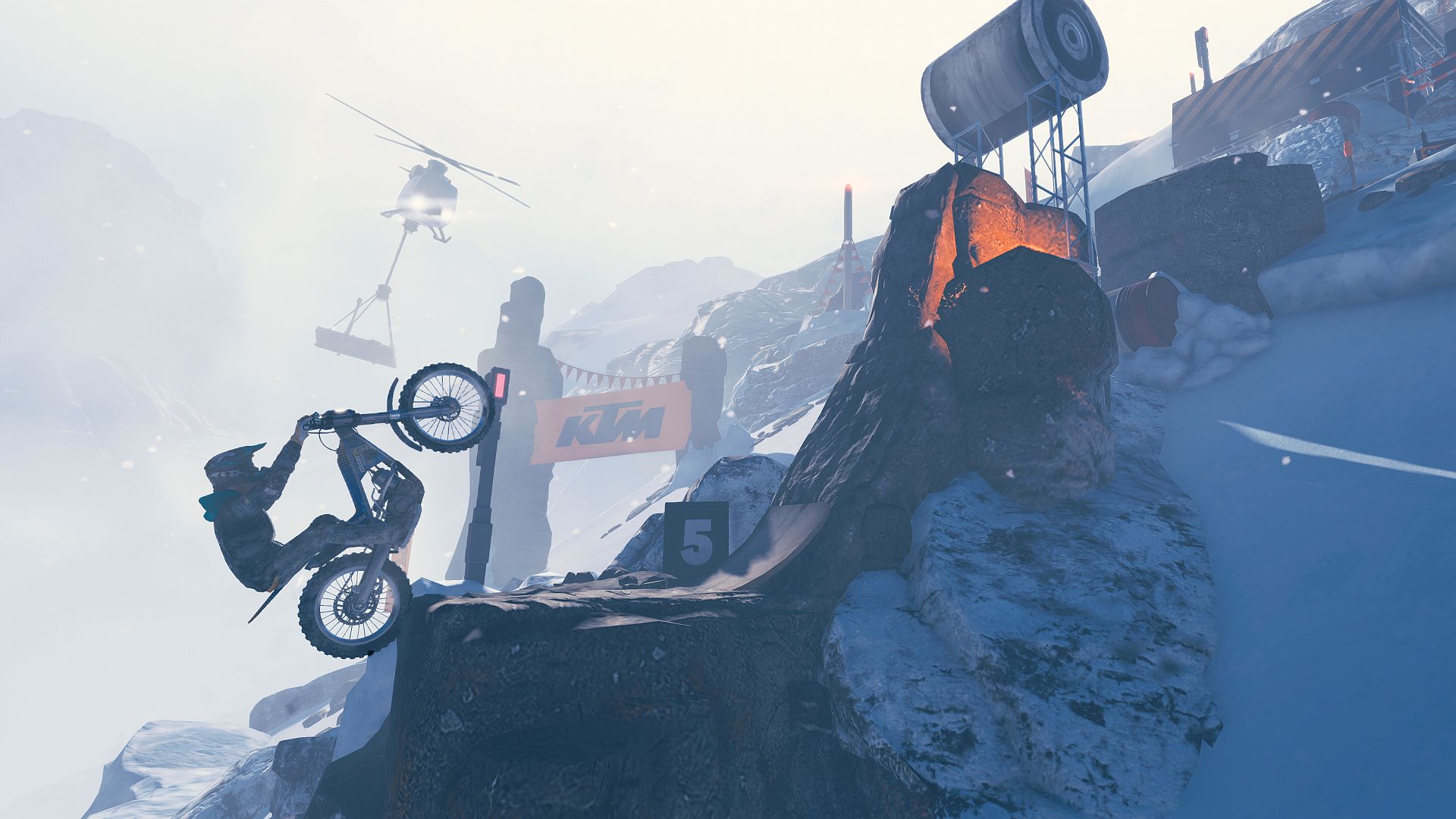 It’s clear that the developers at RedLynx have a light-hearted approach to the game as Trials Rising doesn’t take itself seriously. Crossing the finish line of a track usually amounts in something completely absurd such as launching your player into space or blowing them up. For all the fun that exists in the game, it gets brought back to reality thanks to microtransactions. There are a ton of customization options with an abundance of stickers to put on your bike or rider. There are some hilarious costumes ranging from beer foam hats to a horse head. The problem is, they’re all behind in-game currency and loot boxes. The game consists of two forms of in-game currency and the result becomes a grind. There are multiple types of loot boxes, but the results don’t seem to improve.

It’s one thing to have these implemented, but you are flat out reminded of them every 2-3 minutes. Normally, you’re rewarded after each race with a loot crate. It becomes taxing to open these as the results normally result in stickers. You can purchase individual stickers or unlock via progression, but the constant reminders of the ability to purchase products with real money and roll the dice on the rewards is a bad thing. Yes, duplicates can be sold to make back some in-game currency, but you never receive the other form of currency as a reward. There’s also no way to share your customizations with other people. Ultimately, the fun starts to ween off and you begin feeling like the game is a grind for customizations and unlocking other areas. 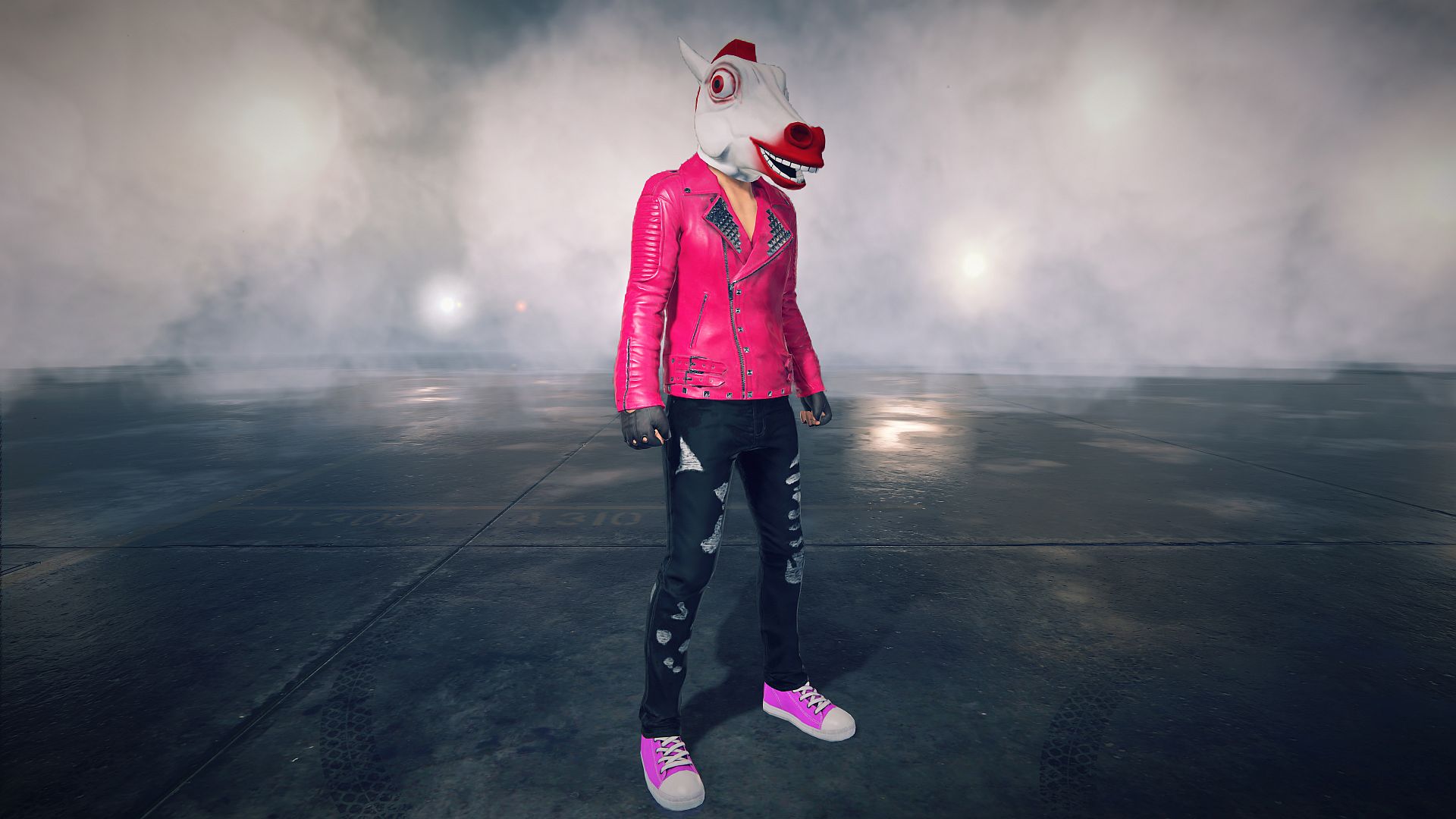 Trials Rising does return the track editor with a robust suite of object options. Objects have been included from every past Trials game to be used in the editor. Creators can adjust the time of day and plenty of details such as having a track in space with limited gravity to help shake things up and give players the opportunity to try different tracks. These can all be downloaded, played and voted on. More importantly, the tracks are cross platform and can be downloaded if you create one on another console. One thing that is seriously lacking in the editor is the inclusion of a tutorial. When you enter the editor, you’re basically just given the tools and told to run with it. This won’t be an issue for players that used this in the past, but new players will have issues with not only the navigation, but the implementation of the tools.

Multiplayer options actually better suit the local option as opposed to online. Trials Rising features a party mode where you and some friends can sit on your couch and do races for hours. This is also where the tandem bike comes into play. Unfortunately, there’s no way to link up online and use the tandem bike. As for the online, Trials only includes matchmaking with no lobbies or voice chat. You play a best of three where everybody votes on a track and the online supports up to eight players. Connectivity is consistent as I encountered no lag.

Visually, Trials Rising is a colorful game with varying environments and plenty of explosions that would even satisfy Michael Bay. The game runs mostly at a solid frame rate, but I did incur the occasional hiccup that can hopefully be patched. It can be frustrating to get that in the middle of a race. Textures and objects are solidly detailed, but the game is meant to be viewed from a distance. Trials isn’t out to set a precedent for visual prowess, but it achieves what the visual design sets out to do. The art design and presentation is relatable to something you’d see on an X-Games broadcast with plenty of youthful influence. The soundtrack is a mix of music that fits the scene. The bikes do sound good and the one thing I can give credit to on the loot crates is the music that plays when you open them (so soothing). There are a ton of sound effects and the crowd can be genuinely funny with specific timing. Hearing a specific guy hollering like he’s had one too many PBRs certainly helps to lighten the mood and keep the fun going. 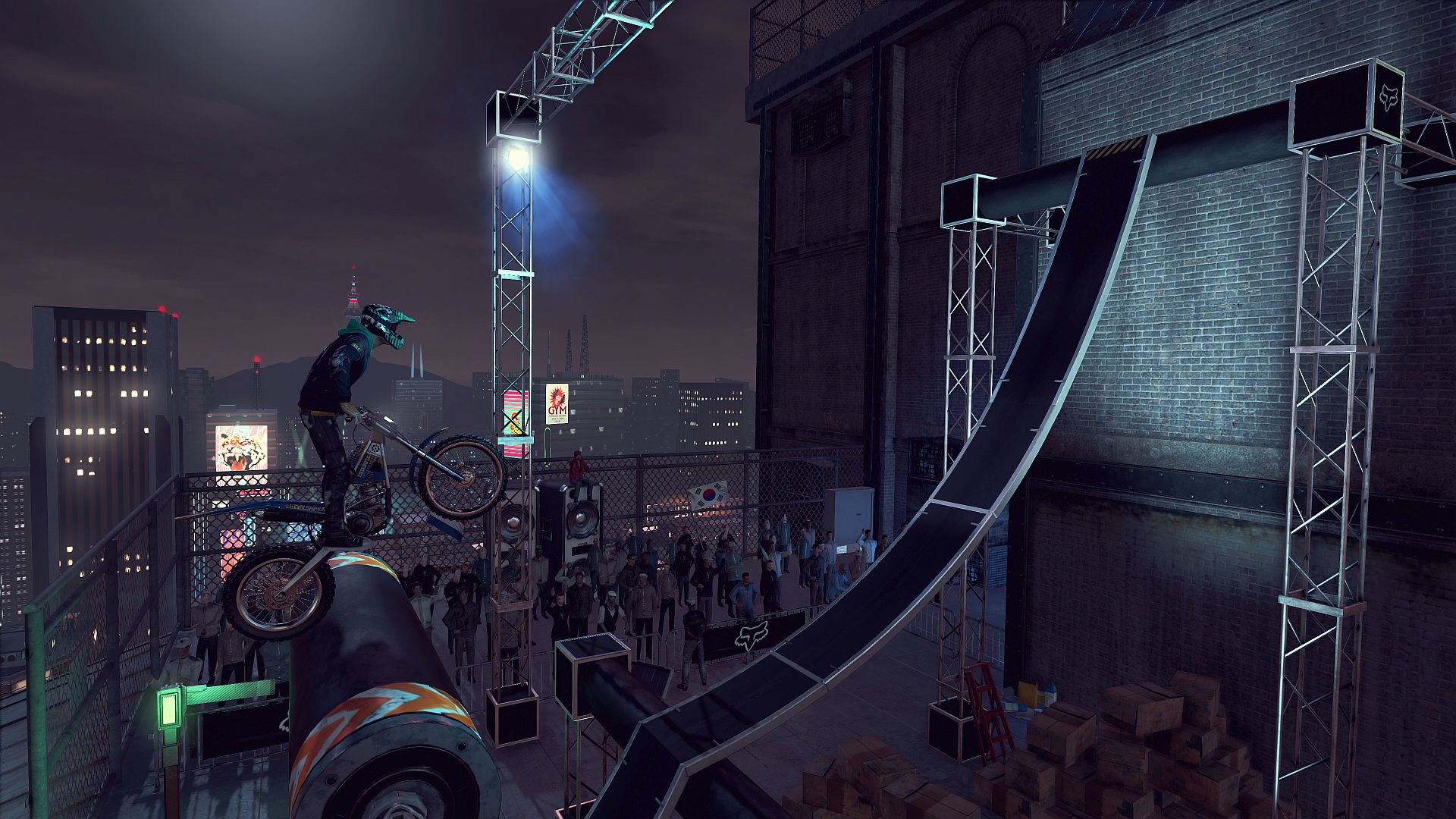 There’s no doubt that Trials Rising is the culmination of the entire series. Running races that are built around platforming elements with a bit of puzzle solving when things slow down is an experience you can’t find in any other game. Throw in a track editor and a ton of customization options, and there’s plenty to come back to and perfect. The downer, though, is the overemphasis on loot crates and putting all these customizations either behind a paywall or a really long grind. This also includes unlocking the other bikes in the game. The track editor also isn’t very approachable for new players, but having the option out there to download other’s tracks adds to the replayability of the game along with the multiplayer options. Trials Rising is a fun spectacle that puts the best of the nearly twenty-year-old series into one package.