Hopping between genres is a risky business. Even if previous affairs have ended up particularly well on both critical and commercial fronts, over-confidence in the notion this cycle is sure to continue always runs the risk of coming back to bite you. And yet Image & Form have managed to skip to and fro from one idea to the next, without much cause for concern, with their beloved SteamWorld series. What started in its infancy as a debutant tower defense game fittingly named SteamWorld Tower Defense soon morphed into turn-based action via Heist only to deviate yet again into explorative ventures with Dig and its well-received sequel. Not that SteamWorld’s charming mix of steampunk colors, robotic characters and entertaining writing isn’t enough a provable formula, but Image & Form have achieved what seems, in theory, relatively impossible in that the series’ greatest comfort is its bizarre discomfort with sticking to one spot/genre for too long.

That odd-but-welcome niggling for the former space it’s residing in surfaces once more this year — the Swedish studio taking, this time, to the role-playing genre. And more interestingly, an RPG centered on the use of cards for battle, but not in a tabletop sense, as if all the visuals are now confined to mere decorative furniture. Already, you might assume, the concern is looming: that for all the cautions the game is taking in appeasing to both longtime fans and newcomers intrigued by the resurgence in card-based battles, SteamWorld Quest: Hand of Gilgamech is immediately giving itself plenty of food for thought. Lumping a fair few other tasks, ordeals with which it somehow has to find a solution to, if not a concrete answer. Made evermore challenging given Image & Form’s intentions to craft a combat system that is accessible to as many people as possible — newcomers enticed by its approach, veterans satisfied in discovering its plentiful depth and routes for strategy. SteamWorld Quest has a lot of checkboxes to tick, moreso you could argue than what a sequel could perhaps entail. 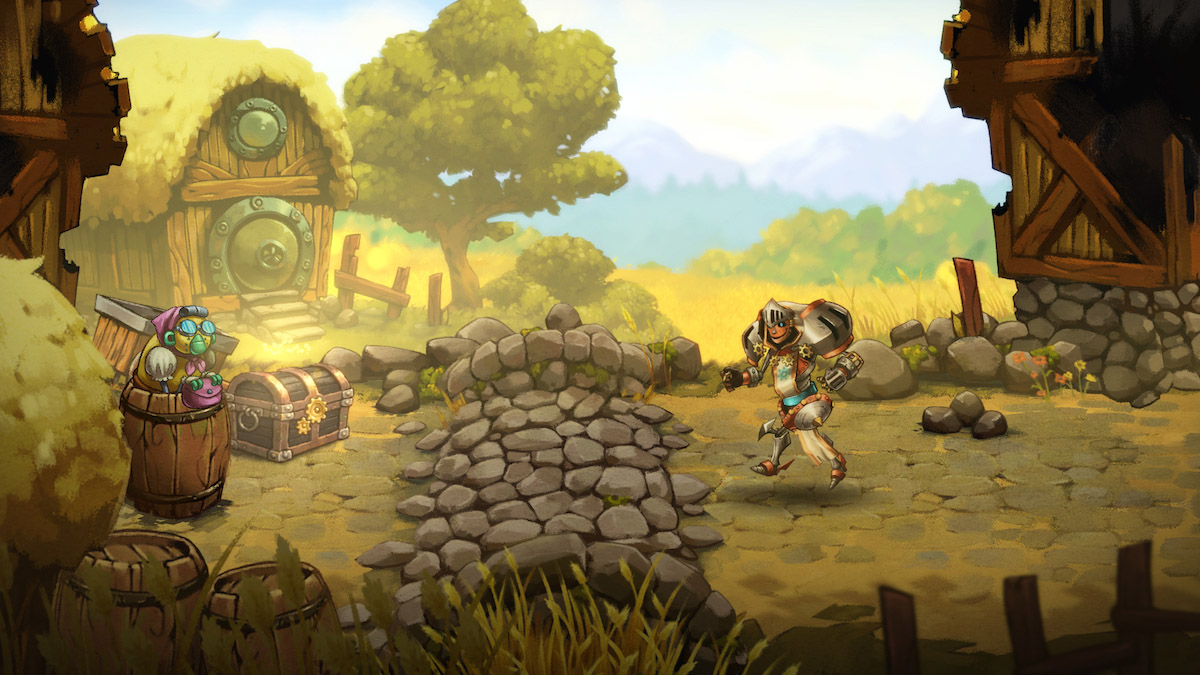 But in the end it’s pleasing to report, arriving back from a recent trip to Sweden to try out the opening segments to Image & Form’s latest, SteamWorld Quest is nothing short of wonderful and that the studio’s knack for integrating the series’ eye-catching aesthetic into many a concept isn’t slowing down. A lot of what has made SteamWorld’s premise, on visuals and artistic design, is here and accounted for. You have your carefully-balanced color palettes that may or may not vouch for some wider spectrum of hues; early parts have the fantastical world of Quest bathed in soft, floral hues of yellow, green and everything in-between. The juxtaposing clash of natural environments and varied steambot characters remain as charming as they’ve always been with endearing writing to match. And like previous entrants, the gameplay — in this case, its turn-based, card-reliant combat — is surprisingly easy to grasp and quick to turn into second nature.

The feat here is even more impressive, more so one could argue than Dig/Dig 2’s unconventional spin on Metroidvania exploration, because of the added layers of decision-making and consideration one has to factor into any encounter. The canny means with which Quest presents all of this, almost as if it’s brimming with confidence that players will latch onto the mechanics. Beyond the expected necessity for RPG staples like status ailments/effects, health management, scrappy chipping-away at an inevitable boss’ health. The regular standards for any RPG outing, in this case a 2.5D side-scroller that, if anything, closely resembles the likes of Paper Mario (one name-drop members of the team were keen to highlight) are accounted for, but what gives SteamWorld Quest its enjoyment is the process of allotting your three-per-turn sequence of moves. 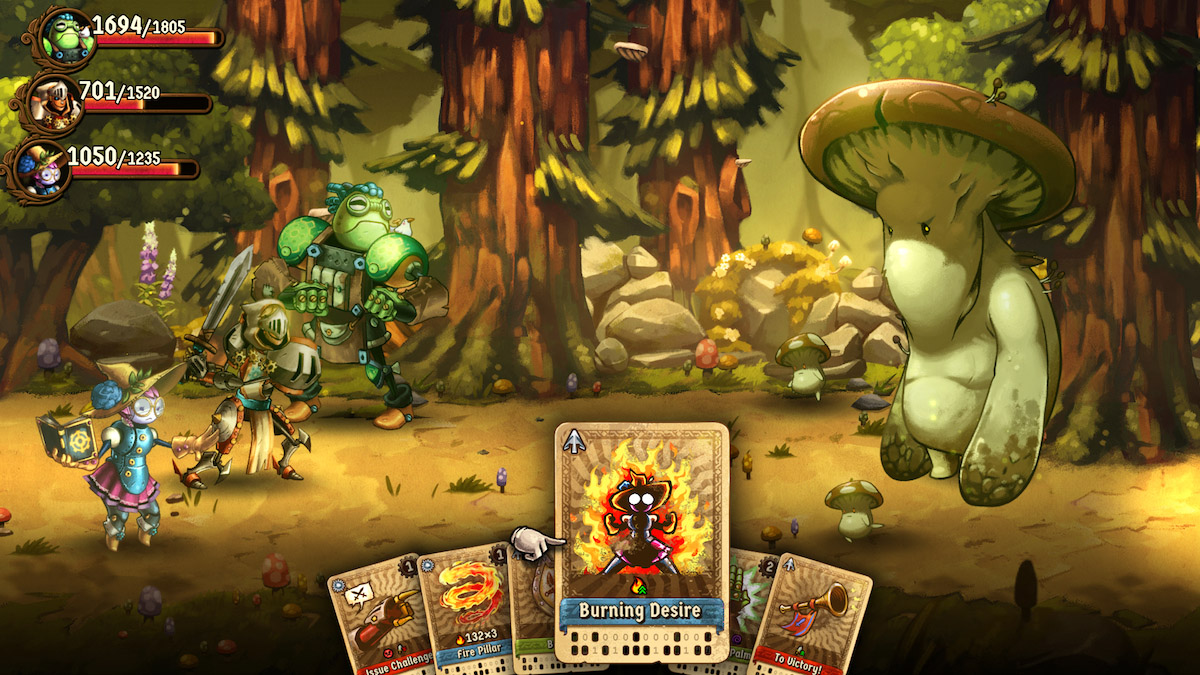 The main gist of gameplay is that from a pre-assigned deck — which you can alter and swap in/out in the main field of play outside of battles, expanded upon by the acquisition of additional cards on your quest that further open up the means for strategy — players pick from a randomly-selected grouping of six cards displayed on-screen. All of which are designated one of three categories: attack (be it strength or magic-based), buff (examples being increased physical strength, reduced damage) and assist (healing being an notably obvious type). The additional strategy comes in the form of what are designated Steam Points (SP for short) which act as the unit of currency that activate particular higher-levelled cards –accumulated naturally overtime when SP isn’t used. Designated by a numeric value at the top of each card, these added skills and abilities prove vital considering that most fights are far from the dispensable, few-second affairs you often see in most RPGs. Boss battles especially last even longer — an early-chapter encounter offering the revelation that bosses too can accumulate SP to initiate their own buffed attacks/skills.

Planning multiple turns ahead is critical as, in theory, one can find themselves low on SP and deprived of options if not careful. A half-dozen selection now inactive, maybe even conceding players to unfortunately skip that turn. Naturally there is a slight resolve to this potential problem with the ability to swap out a maximum of two cards per turn with another two randomly-selected ones from anyone of the party rosters’ decks. But even so, swapping out is by no means a guaranteed saving grace, part of the engagement then lies in making sure to balance one’s desire for stronger, buffed skills now and plentiful options thereafter. Making sure one doesn’t unintentionally leave themselves short in the process. It’s a dilemma, but a fascinating one: which cards, potentially valuable ones at that, do you use/save/ditch? Do you assert a need to line up a heavy-hitting attack or conserve certain skills just in case luck (in relation to the randomly-selected cards from the deck) doesn’t quite shine? 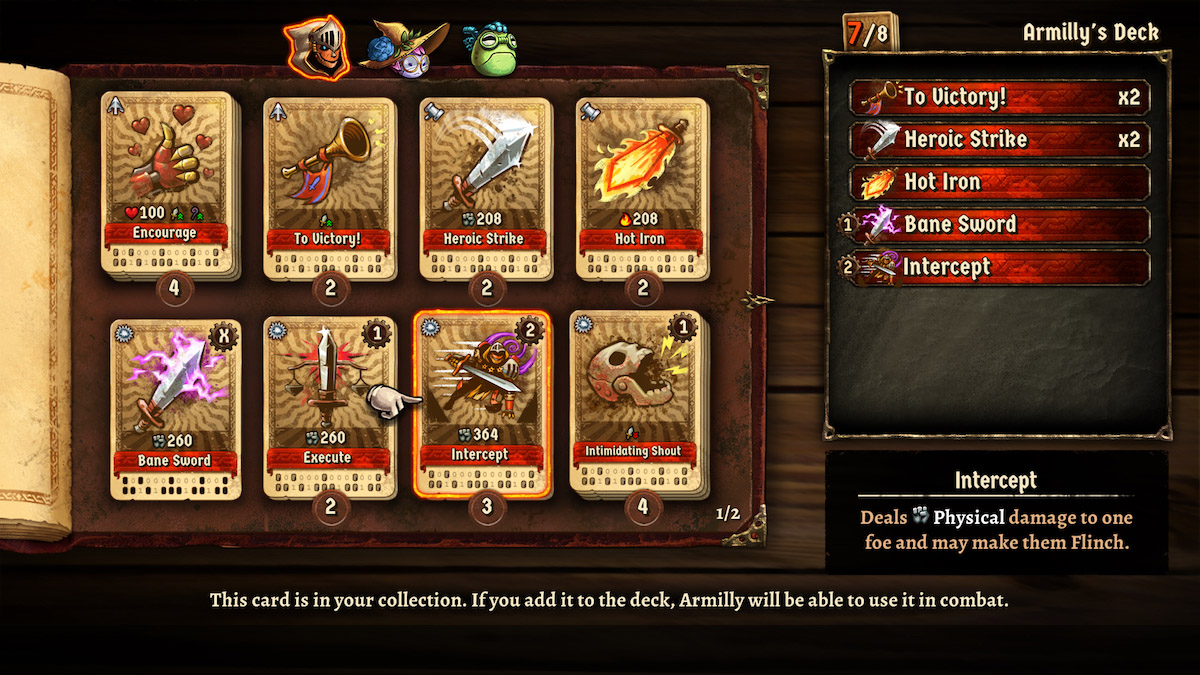 That’s not to say it doesn’t feel satisfying sequencing a buff before a standard attack, only to then finish off a turn with a higher-level strength now, obviously, increased even more so. But the greater satisfaction, and thus impressive feature here, is in managing your deck of cards alongside the status of your party. And yet despite the initially perplexing display of health bars, attributes, points and cards and all variables in amongst all this, SteamWorld Quest makes this entire process not just easy to grasp, but easier still to get lost in. Much like a similarly in-development title with Lab Zero’s Indivisible, the joy of mastering the flow and rhythm of combat is just as fulfilling as the inevitable victory thereafter. That benefit and subsequent reward bears even more fruit when the game later adds the potential for bonus attacks when one incorporates a sequence of moves that all originate from the same character. Should you incorporate cards used from the same deck, you can initiate a fourth add-on attack — furthering the possibilities of how battles play out, and again, how to consolidate your deck of cards between those that may prove useful…and those that can be sacrificed for the hopeful benefit of a lucky pick.

The fact that players are in charge of their deck immediately discards the idea of the game’s back-end falling ill to wonky RNG systems too often. Even then, even when a situation boils down to luck of the draw, rarely did a new random plucking of cards look or feel unfair for the pure sake of it. Sure Quest won’t always grace you with the perfect hand for future turns and there may well be instances of unfortunate bad luck in the heat of battle — especially if the latter chapters crank up the difficulty, threat and/or complexity of its boss battles. But to reinforce the important point here: Quest makes sure to lay out all the fundamentals without feeling cluttered by its own self-assurance in its easy-to-grasp using/dispensing/reusing of cards. 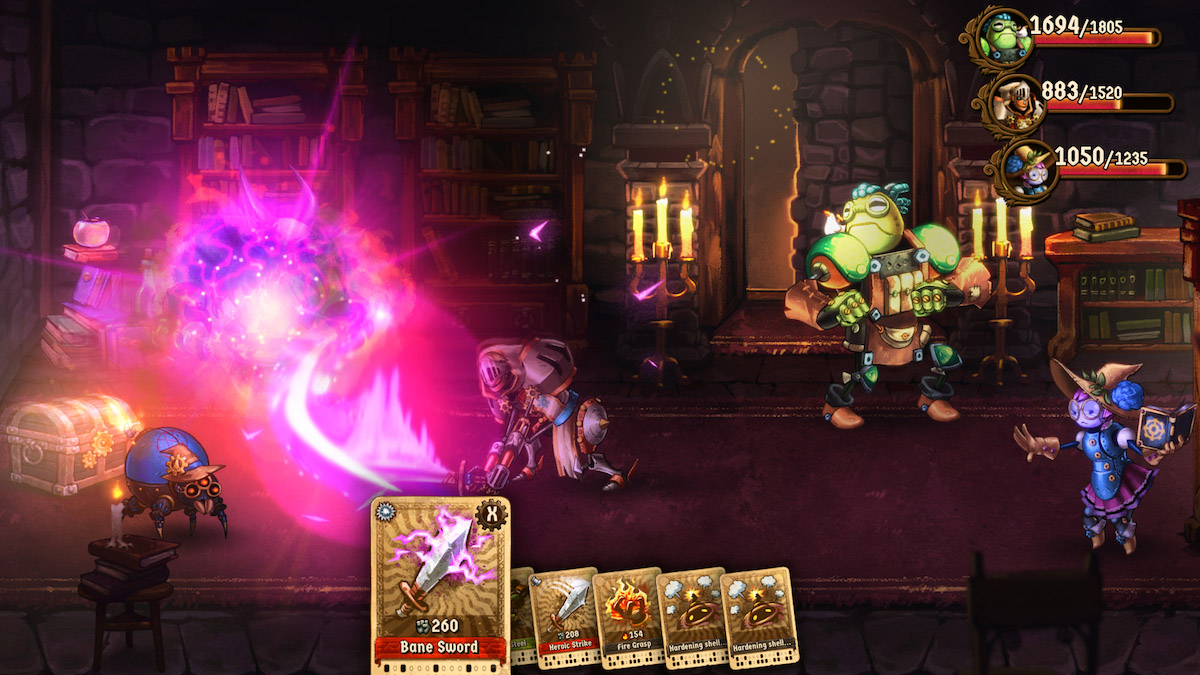 Because for all the care placed into its interface and the artistic presentation aptly placed front-and-center with its surreal meshing of steampunk robots in an organic world of fantasy and nature, to claim I haven’t even delved that deeply into the game’s many other interesting take-aways says a lot about how pitch perfect SteamWorld Quest‘s introduction is laid out. The helpful ability to cancel selected cards in the event of an accidental mistake — sequences only locked in upon a player’s confirmation; secret areas tucked away behind buildings and off the main linear path, save points that refill your health at the cost of respawning enemies; cards having little punch-holes at the bottom; again, the pleasant back-and-forth writing between protagonists Copernica and Armilly.

There’s a reason why Image & Form’s efforts as of late have been hard to ignore and why, more notably, their work has landed them top billing in Nintendo-fronted “Nindie” Directs. Only an hour-or-so into its introductory passage and SteamWorld Quest already is shaping up to be another essential for 2019. Heralding a mix of amusing world-building and intriguing gameplay mechanics alike, without depriving us of the aesthetic we’ve come to know and love from one of gaming’s most flexible properties at present. Locking down a release date for when it hits the Nintendo Switch first can’t come soon enough — Image & Form look to have pulled this one off…again.