Likely out of a means to find alternatives, rather than absolving us of the frustrations in free movement, a large portion of VR games have focused on bringing the experience towards the player as opposed to the other way around. Surrounding us with the gameplay mechanics, requiring us to interact with a set environment, as opposed to traditionally moving about a larger space. Some will of course go down this path, albeit with the forced requirement to “teleport” or otherwise shift from one restrictive zone to the next. Recalibrating where necessary. Fumbling about with the controls when one’s aim is out of sync or — as happened here — your virtual wrist appears to have twisted in a not-so-comfortable fashion, is of course an unfortunate symptom of a technology still trying to iron out the creases in its delivery. But it’s what you do with the surrounding space, how you present the notion of interaction and involvement, that can still give VR a plentiful (if not substantial) amount to talk about.

Even if the material functions just as well outside of the platform — as Resident Evil 7 or Rez have proven despite commended VR interpretations — or you’re instead constantly engaging with the challenge put before you (Beat Saber), as titles like Moss have proven, a more indirect approach to player involvement can still make good use of VR’s sense of encapsulation. Of being a part of a desired setting to some capacity, but more importantly, having a purpose to the way matters progress. Even if the player is essentially some omnipresent, omnipotent force with no real physical presence, VR can still make good, just like any other traditional video game, on its presentation and its delivery. Particularly when said delivery has the intention of telling a story, and a fairly grounded one at that. 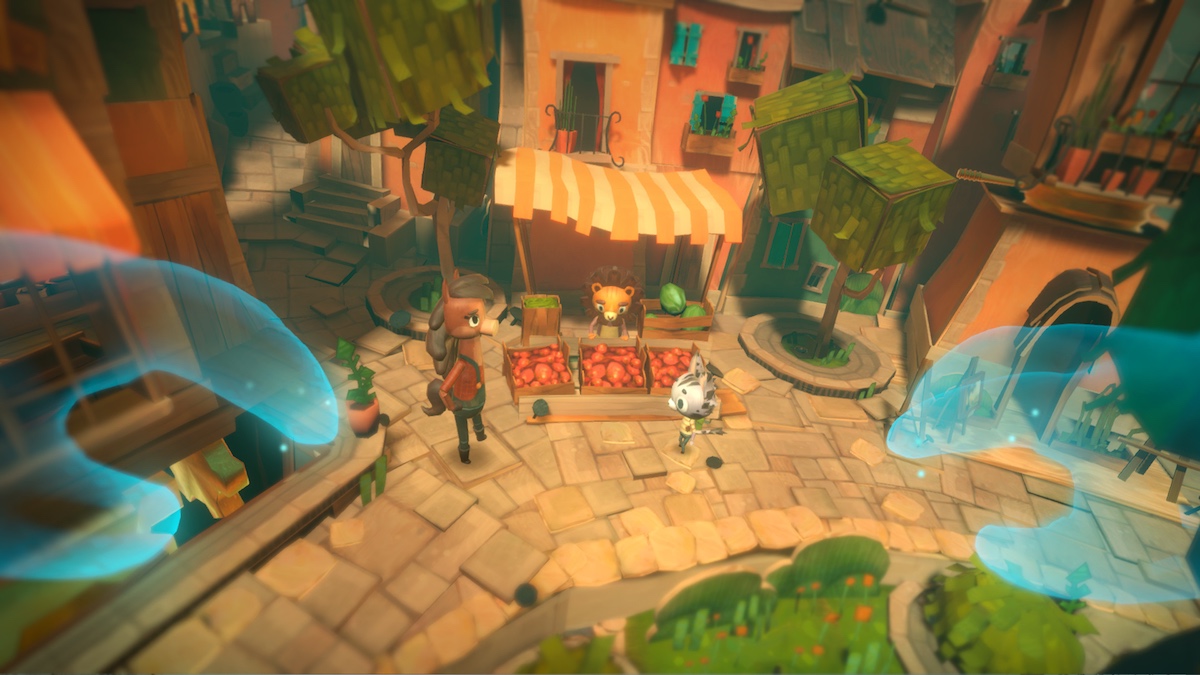 It would be easy to look at Ghost Giant — Zoink Games’ first foray into virtual reality — and commend (or perhaps dismiss) it for being “Night in the Woods in VR.” True, the anthropomorphic characters, the semi-abstract world design, the out-of-proportion build of objects and most importantly, helming a seemingly innocent and child-like aesthetic with a sterner tale of home/family life, may lead people quickly down the path of quick, shallow comparison. A comparison to a 2017 tale of cartoonish animals living fairly human circumstances. Ghost Giant very much gives that impression to start off with, but the comparisons to developer Infinite Fall’s acclaimed adventure title, stop here and not simply because the player is instead indirectly involved in the game world this time. Taking the role of some ethereal-like god entity (manifested as two semi-transparent, blue hands, capable of prodding or otherwise grabbing parts of the environment) invisible to all but main protagonist Louis.

A large portion of Ghost Giant‘s gameplay centers around you helping Louis with the tasks with which his daily life — delivered through designated chapters in the story — and the uncertainty this brings via story exposition. Whether this is introducing yourself, violently so, in the game’s first chapter by flinging Louis into a pond, only to then help his seeming inability to swim by grabbing a nearby life belt. Or in a later chapter by helping him grow flowers through manipulation of nearby rain clouds — Louis later not-so-subtly remarking upon how he wish he could fly atop one of these clouds — Ghost Giant‘s objectives predominantly boil down to interacting with a set number of objects and manipulating them to some capacity. The game doesn’t always make it clear how close/far away one is from “triggering” the next phase or state in the objective, but there’s enough of a sign to indicate that something in the environment needs the players’ god-like intervention. Some elements are easier to spot as imperative to the objective than others; most objects in the surrounding space can be effected by a simple push or tap, but a lot of this is purely down to aesthetic. 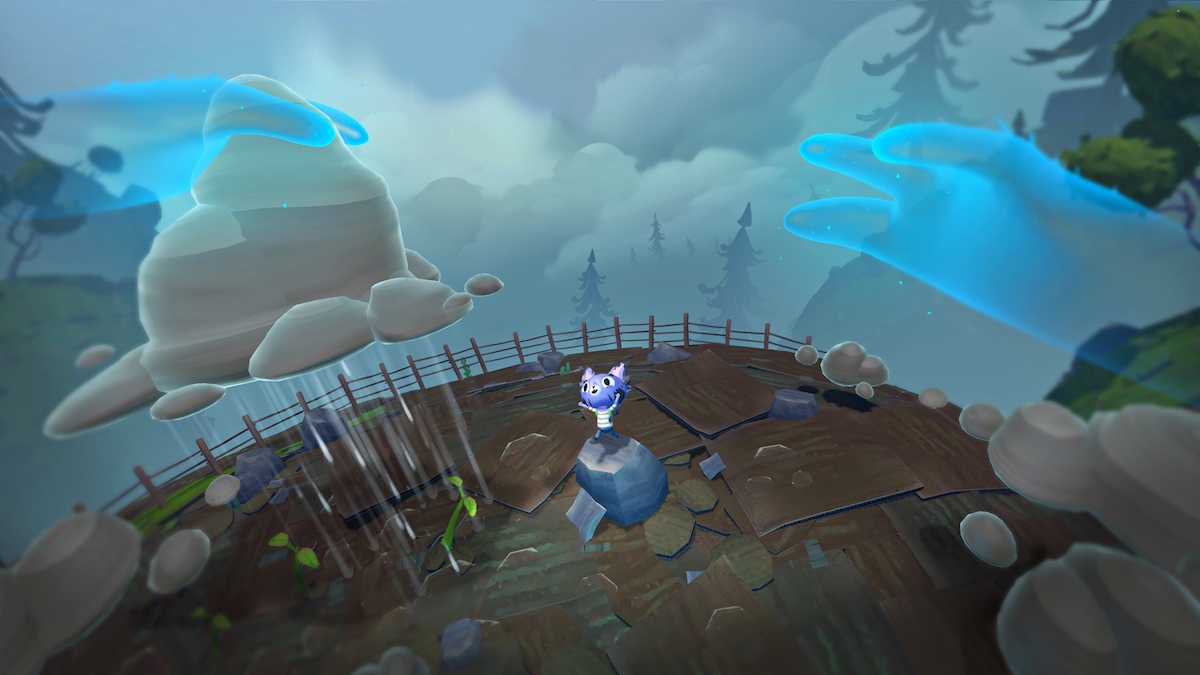 There are instances where outright looking for the desired object becomes paramount. Going beyond simply turning one’s head to, say, spot a couple of nearby, convenient clouds that can be used to dispel rain; one instance having you clear a pile of rubble so as to pick up an object hidden beneath. The process here may be considered simple by nature and there’s no getting away from the repeated loop of finding an object and deducing which one of two possible interactions (poke or grab) progresses the story forth. Part of the appeal here — and one that comes to reflect upon the game’s general artistic and presentational intent — is the notion that Ghost Giant feels less like a substantial world one is a part of…and more this theatrical stage show you are not only watching, but influencing to a certain degree.

Imagine the kind of stage plays and performances befitting of any small, local theater and you’ll have a former grasp and understanding of Ghost Giant‘s delivery here and more so, why its admittedly simple gameplay mechanics may inadvertently result in a more engaging progression of story beats. The world of Ghost Giant — right down to the chapter select screen, resembling some old-fashioned, clockwork-powered contraption of pop-up illustrations and chunky button interface — feels weirdly autonomous yet still holding onto that fond exaggeration prominent in children’s stories. This association with stage and story is the reason why Ghost Giant ends up being effective in the short-run. More effective perhaps than what its gameplay loop offers up in totality. 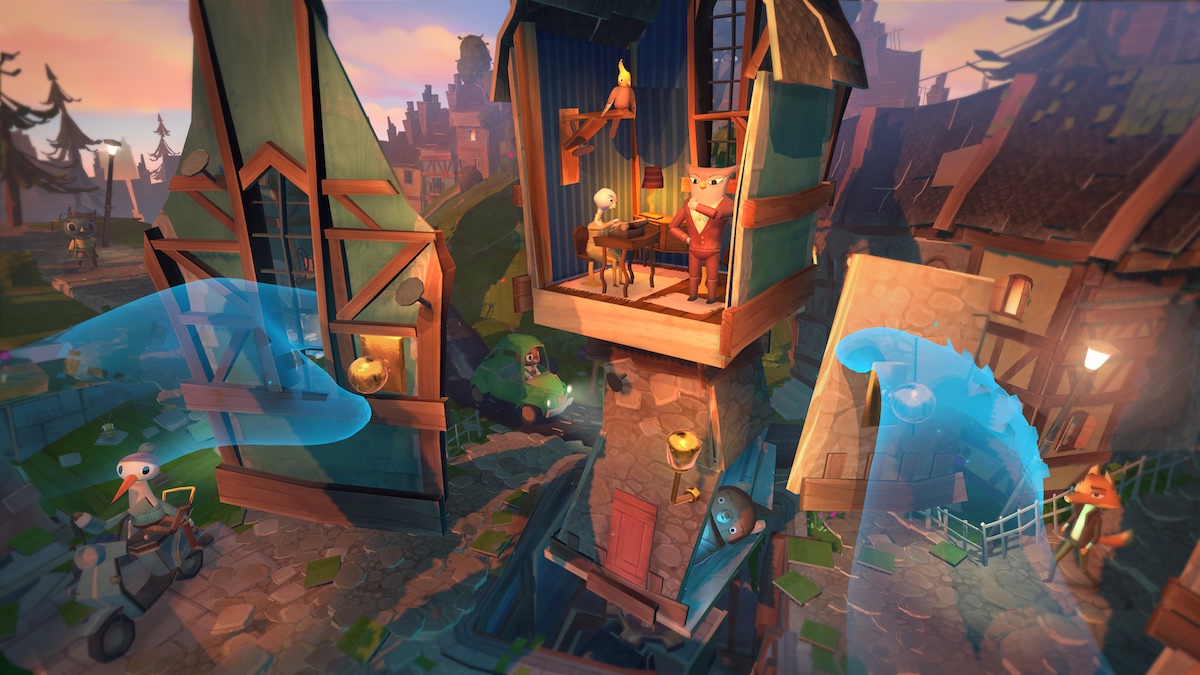 That’s not to say that the game’s method of player involvement is lesser by design and as you progress further into the tale, the changing surroundings — such as Louis’ home town, centering around a market square of geometrically-simplified buildings and disproportioned shapes — offer up some opportunity to almost deconstruct the setting, as if comprised of mere props and hand-crafted models. Bronze-glazed handles acting as the subtle indicator that such a thing like a ceiling panel can be so easily yanked off and thrown about. This integrates further into the gameplay when one has to physically rotate a building Louis enters, again as if the entire world is reliant on some out-of-shot, well-oiled machine of cogs, levers and gears. It’s a nice touch but one that tends to push slightly more forward the influence from theater performances and that notion of characters acting out a scene on a stage, as opposed to a functioning world of internal rules and physics. Which isn’t inherently a bad thing though; the fact that particular spots are focused on almost by way of a out-of-shot spot-light, as the remaining surroundings go dark, again only heightens the importance of the narrative elements. But in a way that doesn’t come off as indulgent in its own self-assured importance.

It’s one that instead reaffirms the idea that the player is, despite involved to some extent in the story, as much an outside spectator as they are part of the main cast — a perspective that makes sense for a player taking on the role of a spectral entity half-way between being inside and outside the confines of the game’s setting. Thus, Ghost Giant‘s fondness for this kind of delivery — a reconciling with the physicality of stage-like performances and methods of scene transitioning particularly — is a well-translated one and the reason why Zoink’s debut into VR could be the next great investment for the platform so far as potential goes. 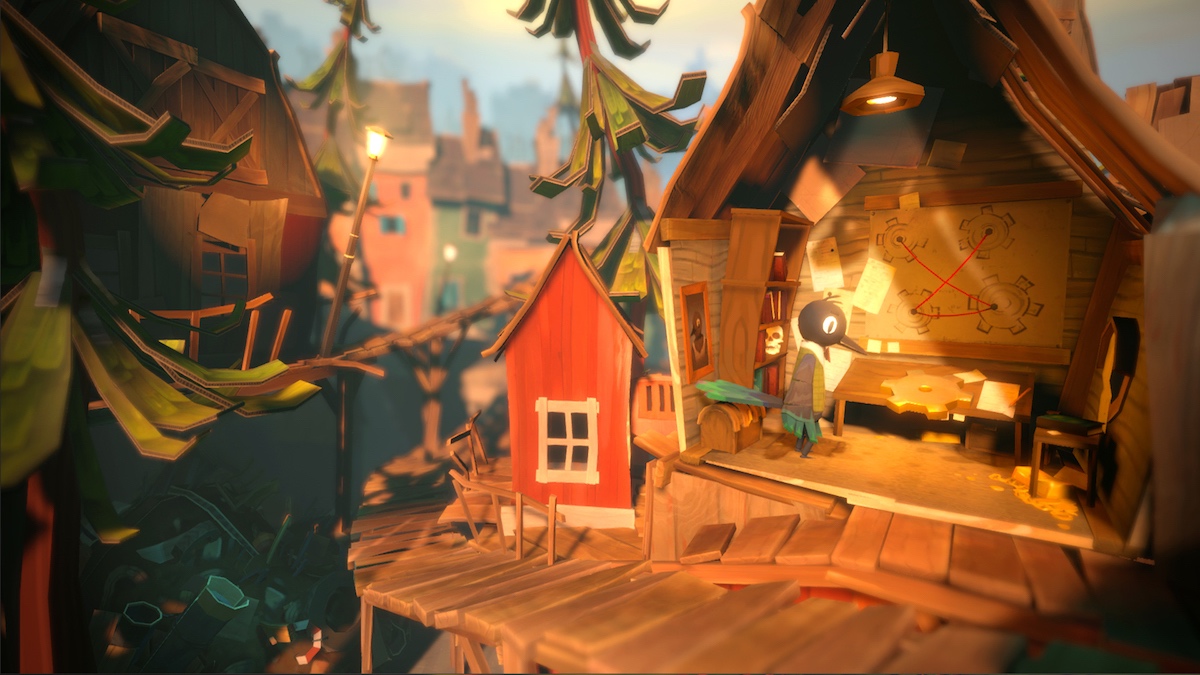 Time will tell if the game’s methods of interacting with the world diversifies beyond just the simple “grab object/move object” process and whether the minor concerns for the obviousness for what constitutes as important or optional interactivity in the context of objectives is exactly that: minor. Ghost Giant‘s approach to story-telling from a mechanical stand-point is promising though, as is the thoughtful little aesthetic touches to its presentation. The way lighting and space are used and how the game’s assortment of items and objects have all the temporal relevancy of a stage prop…but in no way detrimental as a result. How the overall performance, if you will, fairs as a video game will be interesting minus any and all decorative appreciations. Zoink’s solution to player involvement, at the very least, offers some hopeful alternative to simply pointing and teleporting one’s way around a map. Ghost Giant will be available exclusively for PS VR digitally on April 16, with a physical version following suit April 19.