BioWare’s science-fantasy game, Anthem, released recently to more than a little criticism and fan disappointment. There’s fun to be had in the game thanks to its large world and super-powered Javelin suits, but that fun is heavily hampered by many of the game’s other systems. Its shooting needs work, its higher difficulties need more thought put into them and its loot is just plain boring. That last point is perhaps the most problematic of all since this game is supposed to be a looter-shooter and the one thing a looter-shooter cannot afford to have is boring loot. This is especially true when the game’s microtransaction store is the only place one can acquire new cosmetics for their character. Anthem does all of this and then takes it even further by both limiting stock and charging ridiculous prices for it. If EA and BioWare want players to stick around, they’re going to have to seriously re-think how they’re going to handle these systems.

First and foremost, Anthem’s problem is one of loot. Loot has been and will always be the driving force behind these kinds of games. It was in Borderlands; it is in Destiny, and it will be in the upcoming Division 2. Getting better and more exciting loot is what keeps players invested between content drops and Anthem’s current loot system ensures that its item drops will never be exciting. There are three main reasons for this. First, it’s impossible to tell what an item is when it drops. There’s no burst of excitement and no anticipation for the end of the mission because that drop could be anything. Second, there are no unique models. Weapons always look the same regardless their rarity. The color might be different, but otherwise it’ll always be the exact same gun. It doesn’t even matter if the weapon comes from a different line. Every shotgun looks the same; as does every assault rifle, pistol, sniper rifle and so on. Where exactly is the fun in chasing the exact same gun over and over?

Third, almost nothing is rendered on the Javelins and all armor is locked in the store. Few items have any visible impact on the Javelin suits; they might as well be numbers for all the good they do there. Equipped weapons show up at least, but they all share the same boring design, so that’s not much of a win. There’s also no chance of finding new armor pieces out in the wild, so players cannot expect to ever get a drop that will make their Javelin look cooler. This also removes any sense of prestige to be had within the community. All interesting cosmetic changes come from the store, so there will never be that moment of looking at another player’s suit and wondering where they got that cool gun, cloak or chest piece. This is unacceptable in a game like this, no matter how old or new it may be. Gearbox understood this when they made Borderlands back in 2009 and Bungie understood it when they launched Destiny in 2014. BioWare’s failure to learn from either of these examples is beyond astounding considering the amount of time that supposedly went into Anthem’s development. 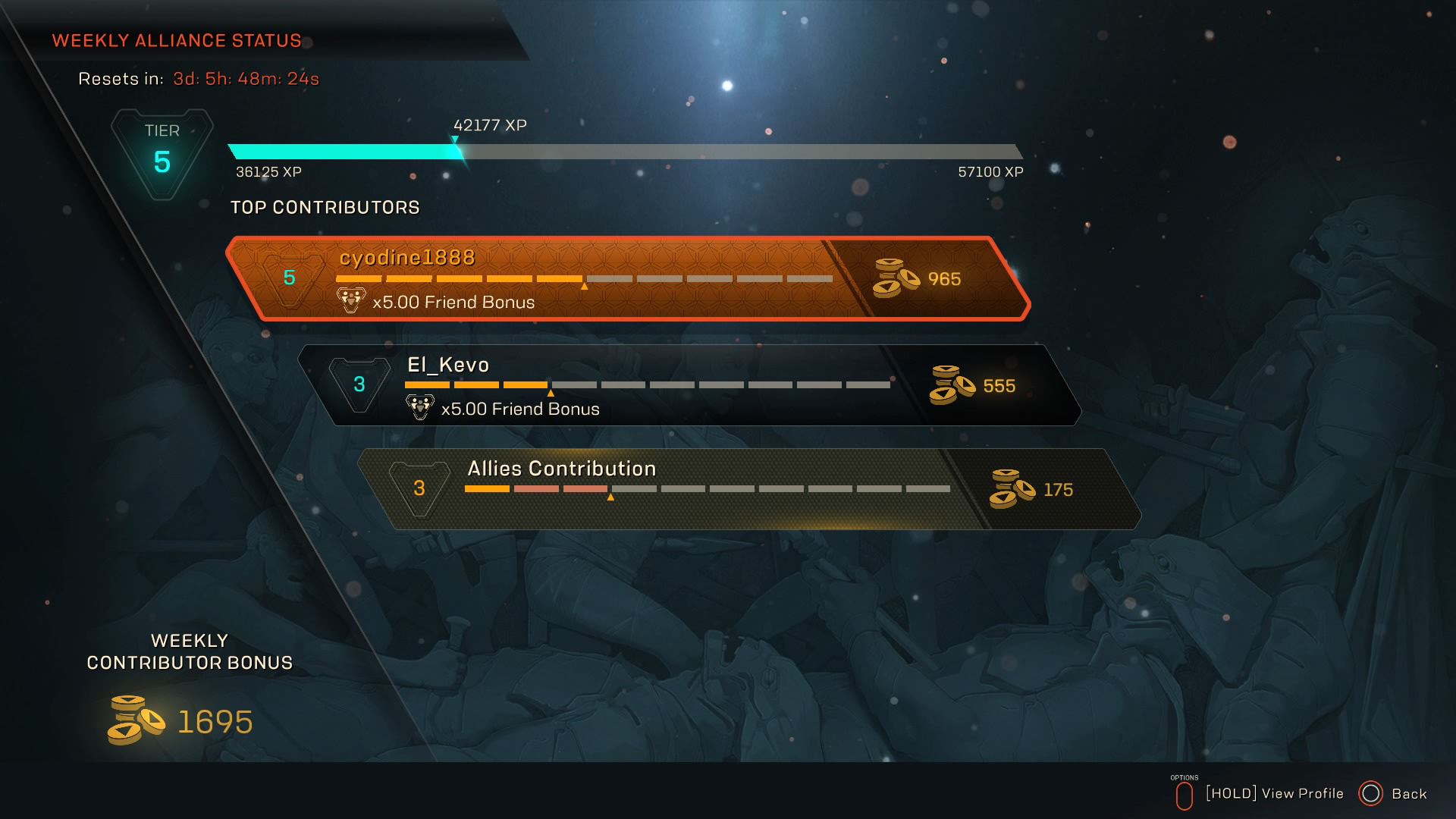 As for the store, its value is directly affected by Anthem’s shoddy loot game. One would rather a game like Anthem not have an in-game store at all, but that feels like an impossible ask these days. That said though, there are ways to have a store without it feeling like a cynical cash grab. Take the current iteration of Destiny’s Eververse. Its presence is annoying to be sure, but it doesn’t really intrude upon the game all that much anymore. Players have plenty of ways to get cool loot and cosmetics without having to interact with the store at all and they can always get at least a couple of freebies from it each week. This is not the case with Anthem’s cash shop.

Anthem’s cash shop stinks. There, I said it; it absolutely stinks. It’s currently the only place one can get cosmetic items for their Javelin, so right away players are forced to interact with it if they ever want to see a new armor piece on their suit. This situation would be problematic even if the normal loot game was okay, but it’s not. This shop is the only place one can find something even marginally cool to look at. Furthermore, its stock is always limited. At any given time, Anthem’s cash shop only has six items available for purchase. six. If one wants to see something else, then they’ll have to wait a full four days or so before something new is offered. Of the items offered most have been boring decals and emotes that are all way too expensive to warrant purchase. As things stand, those interested in buying new armor are often going to have to wait an unreasonable amount of time to get it, and that’s assuming they’ll even be able to purchase it at all. Remember those unreasonable prices? Yeah, they might be the biggest impediment of all here.

Like most games of its kind, Anthem operates with two currencies: one standard and one premium. The standard, in-game currency is just called “coin.” Coin is earned by doing just about anything in the game. Completing missions, fulfilling challenges and ranking up one’s “alliance rank” all earn coin. The problem is that it’s earned way too slowly. My version of Anthem came with 40k to start and I’ve added another 19k coin to that after at least twelve hours of playtime. It sounds like a lot, but, considering that one helmet costs 14k and a simple graphic (aka: a sticker) can cost 36k, it’s actually a paltry amount. There’s always the premium “shards” currency, but why on earth would anyone want to interact with that when the normal prices are crazy to begin with? They wouldn’t and they won’t spend what little coin they have either. With such a dismal earn rate, one is only going to get to make one or two purchases from this store, so they’re going to sit on that coin until they see something truly special. 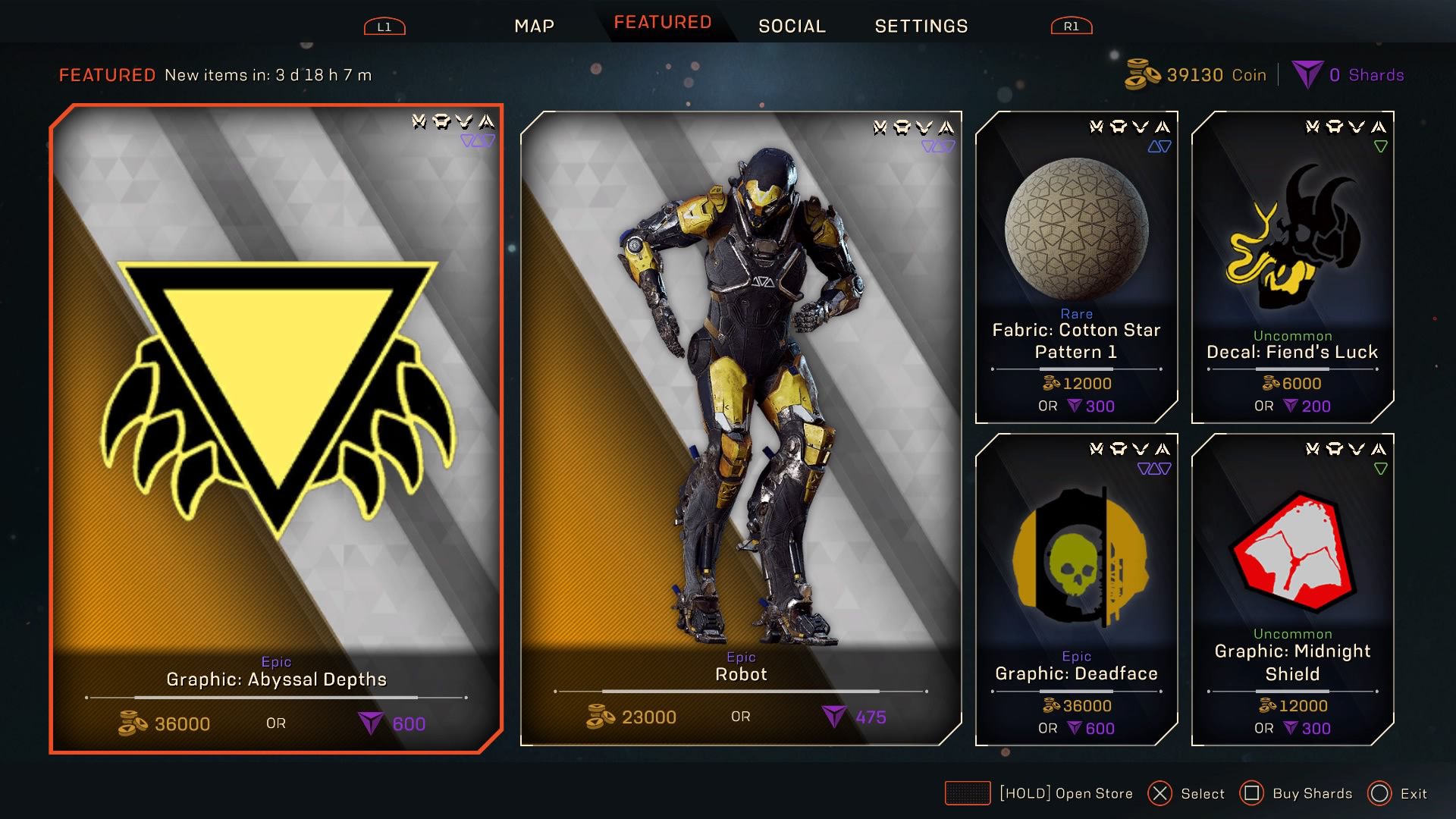 The number and types of problems facing Anthem are enough to leave one wondering whether or not BioWare really thought this game through while they were developing it. These are basic problems that have already been solved by many games that came before Anthem, yet here they are anyway. Its loot is boring, which makes for a wholly unsatisfactory grind and makes the presence of the cash shop even more suspect than it would normally be. Their handling of said cash shop just makes everything worse too. Its stock is too limited; its refresh timer is annoying; its items are too bland, and they’re all grossly overpriced given the actual earn rate for “coin.” Anthem has potential, but it’ll never realize it if BioWare and EA allow these sorts of fundamental problems to persist much longer.

Anthem is available on PC, PlayStation 4 and Xbox One.